More than 900 soccer fans piled into All High Stadium on Saturday to see German professional team FC St. Pauli tangle with local amateur club FC Buffalo. When the final whistle blew, the crowd applauded, and it wasn't for the result or a standout individual performance.

This was something bigger.

First and foremost, the fact that a team in 2.Bundesliga, Germany's second-highest level, would travel to Buffalo after a grueling domestic season was unusual in itself.

"It's kind of surreal to believe that a team that draws 30,000 [fans] per game and is such a big global presence would take time out of their schedule to come to play us, a minor league team that's trying to get by," remarked FC Buffalo head coach Frank Butcher after the 2-0 loss.

FC St. Pauli is known across the world as an ambassador of more than just soccer, touting values such as anti-fascism, anti-racism and anti-homophobia outlined in the club's mission statement. In the uber-competitive climate of European soccer - where billionaire owners shell out massive transfer fees - FC St. Pauli, owned by its fans, is a refreshing contrast.

"They stand for so much more than just the soccer field, which is cool to see nowadays because you don't see that at many clubs," remarked FC Buffalo goalkeeper Bryce Tramuta. "It's something we want to replicate here in Buffalo."

When an organization and its fans share the same values, the bonds aren't blocked by borders, but St. Pauli's Hamburg headquarters seems to genuinely care about its supporters around the world. FCSP supporters groups from around the Northeast, Canada and even Buffalo's 30-person chapter waved flags and chanted together on Saturday, then embraced each of FC St. Pauli's players after the contest.

We aren’t experts on supporter culture, but @fcstpauli_EN has something special, from their sense of community to their shared values. The club seems to really relish the support, too. It’s cool that Buffalo got to experience this. pic.twitter.com/eSLB3fleVe

Marketing manager Christian Pruess mentioned that St. Pauli eyes markets where it has supporters and prefers to play foes from independent leagues, like the National Premier Soccer League, not associated with The Establishment, in this case Major League Soccer.

Still a little stunned by the scene, the City of Good Neighbors proved a gracious host - offering St. Pauli a cooler of Sullivan's beer post-match (which was turned down) - repaying the warm treatment from their trip to Germany earlier this month.

"The way they treated us over there was top class, letting us stay at their facilities, train at their facilities, play against their second team - they even took us out to dinner the night before," Tramuta explained. "Having [that experience] and the fact that they wanted to come back and play us here, it just means a lot. You hear about them, even over here in America, and we never thought we'd have the chance to play a game like this, ever."

The scene at All High on Saturday had some similarities to the first visit by a European club - Bedlington Terriers FC, a ninth-division team in England - in 2011. Then, FC Buffalo drew more than 4,000 fans in a comfortable victory, but Saturday's atmosphere - aided by a more robust The Situation Room and the vocal contingent of traveling St. Pauli fans - was arguably more lively.

St. Pauli scored on either side of halftime, receiving goals from Sami Allagui, a Tunisian international, and Kevin Lankford, a German-American who was once a prospect for the U.S. youth national teams, while Svend Brodersen kept the clean sheet. Nevado Elliott, Kieran Toland, Colin O'Keefe and Filip Johansson each came close for the Wolves, with only O'Keefe forcing a save.

"I think we did better than we expected," Tramuta reflected. "We went down early and no one gave up, no one put their heads down, we fought and in my opinion, it could have been a close game."

[Related: Look back at the match's action through BN Soccer's Twitter] 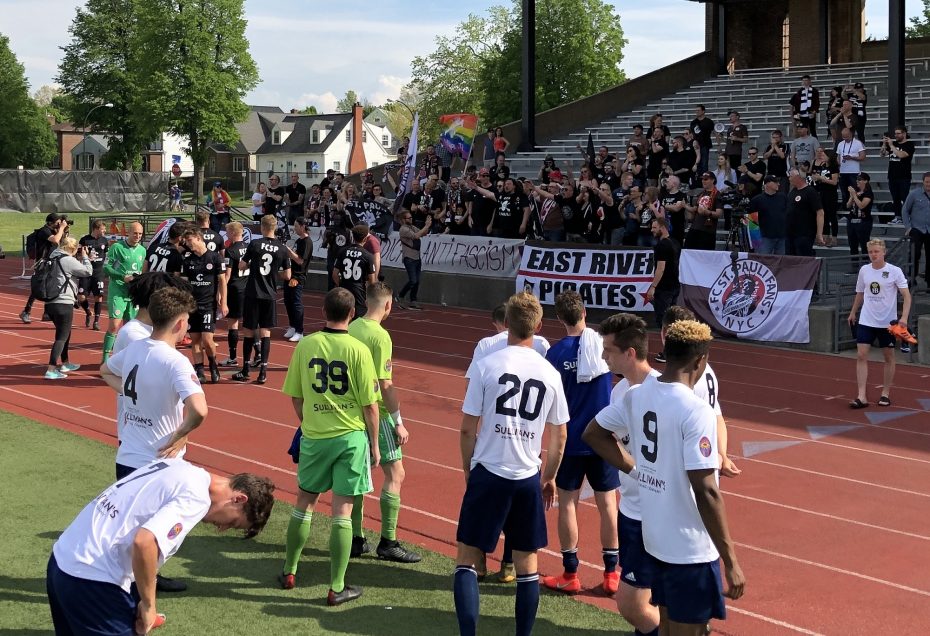 The home pitch aided Buffalo tremendously - high-level European teams almost never play on turf, especially not a matted down surface like All-High - and the unfamiliarity left the Germans with some nervy moments.

FC Buffalo reserve defender Niklas Breunung, one of two Germans on the roster, sympathized with St. Pauli because he remembered his transition from Fulda, Germany, to Le Moyne College, in Syracuse.

"The whole culture, the surroundings on game-day are different from what we're used to in Germany, so I can kind of feel them a bit because I know how it was for me when I came here," Breunung said. "The field is different, you have all these lines on the field ... in Germany we have soccer fields and that's it.

"You saw in the beginning they made a couple mistakes - you wouldn't expect them to do that," he added. "And with their season just over, they probably were a bit tired too. And when you step out on the turf, it's a little different than on grass fields." 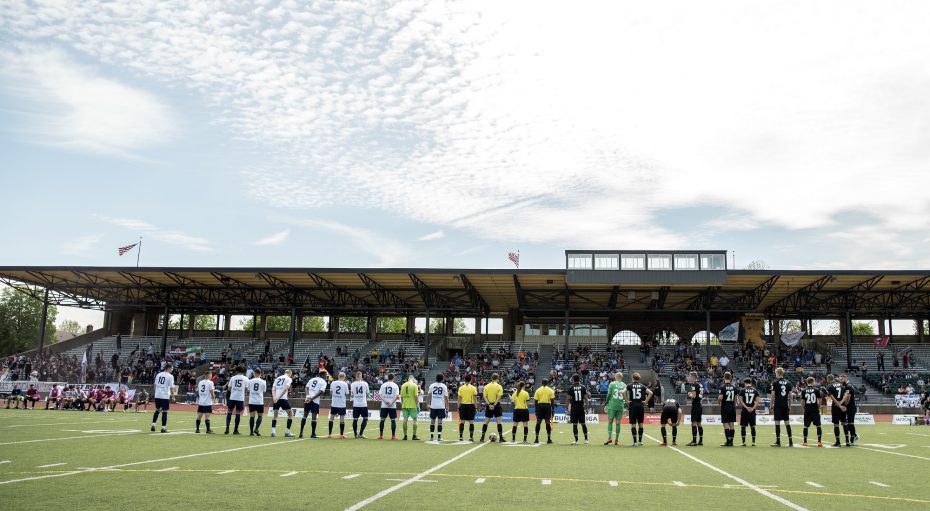 Fans didn't feel too badly for St. Pauli, as the conditions produced a more even match and even frustrated a few of the FCSP players, with Marvin Knoll seeing yellow and Daniel Buballa getting feisty on a few occasions with FC Buffalo captain Chris Walter.

Players and coaches from both teams made amends at a post-game karaoke party held at Town Ballroom before the German team departs in the morning for Niagara Falls, then Toronto.

He said it: "I think walking out for the first time at All High - this was my first start here - hearing all the drums and all the people before I walked out - and walking out with St. Pauli - is something I'll always remember." - Tramuta on the biggest moment from the FC St. Pauli game.

Here’s the walkout video. FCB not wearing their 10th anniversary jerseys because FCSP brought only one color. pic.twitter.com/ubJGe6nicR