Single mother Jennifer Colon thought she was going to lose her job when she couldn't find child care for her baby. She found a facility at the last minute, but it’s a 45-minute drive from her home.

Sarah Durham and Paul D’Angelo spent months calling day cares as their son approached his first birthday. It took nearly six months and the help of a child care advocacy group to find a spot for the infant. Now Durham, a pharmacist, can start looking for a job.

Child care is in short supply here and across the country.

Large swaths of Erie County fit the definition of “child care deserts.” A “desert” is defined by a census tract with more than 50 children under the age of 5 that lacks licensed child cares, or where there are three times as many children as there are available slots.

The top child care deserts in Buffalo include sections of the West Side, East Side and North Buffalo, according to 2018 data compiled by the Center for American Progress. Outside the city, sections of Grand Island, Lancaster, Aurora, Amherst and Clarence qualify.

Across the country, 51% of people live in child care deserts, according to the Center for American Progress study.

In Erie and Niagara counties, there are 658 day cares, but the population of young children far exceeds the capacity of those facilities, according to day care officials.

So what happens with children in need of day care when none is available?

“Parents who don’t have a reliable child care plan often resort to patchwork care or turn to illegal and unlicensed child care, both of which are not the best options for our children,” said Jodi Schwegler, an official at the Child Care Resource Network in Buffalo.

Since 2012, there has been a net loss of 50 licensed day cares in Erie County. The reduction has occurred at a time when the demand has been steadily increasing with unemployment at a 30-year low of 4.5% in the Buffalo Niagara region.

Low pay for child care workers has been cited as one of the main reasons why day cares have struggled to stay in business. A majority of the workers make less than $28,000 a year before taxes, according to Schwegler. Compounding the problem is the high costs of day care.

Locally, infant care is the most expensive with an annual average cost of $13,000, followed by toddlers at $11,000 in Erie County, Schwegler said.

“That is for one child,” she said. “Most families have more than one child. If you do the math, it is a lot.”

For parents, sometimes the stress of coming up with a workable child care plan can seem unbearable. 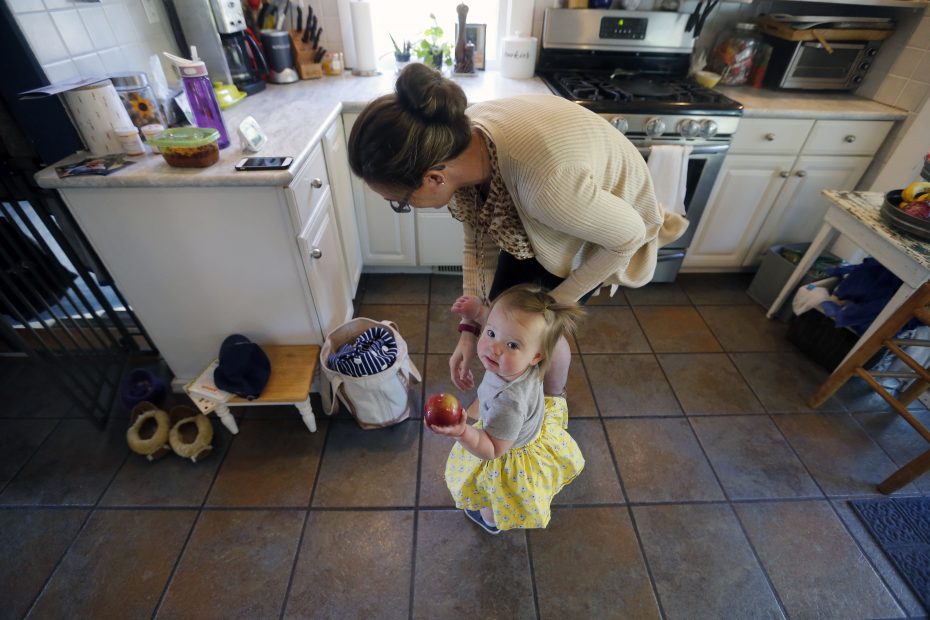 Emily More of East Aurora gets her daughter Addison ready to go to her mother's home while she works. (Mark Mulville/Buffalo News)

For Emily and Scott More, there is rarely a break when it comes to providing child care for their 16-month-old daughter Addison.

Emily More compressed her 40-hour work week into four days, so that she could be off on Fridays. That means she starts work at 7 a.m. from her East Aurora home until her mother-in-law arrives at about 9 a.m. on Mondays.

She then drives to downtown Buffalo where she works as an executive office coordinator for the United Way of Buffalo & Erie County.

On Tuesdays and Wednesdays, her husband is off from his job at a recreational facility and cares for their daughter. In exchange for these weekdays off, he works weekends.

On Thursdays, Emily More again begins work at home and at about 8:30 a.m. bundles up “Addy” and drives several miles to her mother’s residence in South Wales.

The Mores had considered placing their daughter in day care one day a week to add some “relief and flexibility” to their schedule, Emily More said, but there were obstacles.

“Most day cares offer two days as a minimum requirement,” she said. “If we went with a two-day plan, that would be about $500 a month and it is too much right now for us to consider.”

So for now, More said, “My husband and I are two ships passing in the night.”

Sheri Scavone, executive director of the Western New York Women’s Foundation, said the lack of day care has risen to a crisis level.

“Child care is really essential for healthy childhood development, especially for children living in poverty who don’t have access to enrichment and literary activities,” Scavone said. “It’s also essential for working parents, particularly women who most often shoulder the responsibility of child care.”

Working with state politicians, including Sen. Tim Kennedy, D-Buffalo, the foundation has played a role in supporting legislation that has brought increased tax dollars to Erie County for child care subsidies to low-income families. For instance, a two-member household – a working parent and child – would qualify in Erie County if their household income was less than $45,265.

The state's market rate for infant care – the  most expensive type of child care – at a day care center in Erie County is $280 weekly. For a single parent with a projected income of $21,000 annually, the subsidy for infant child care would be $250 a week. The parent would contribute $30.

Kennedy and other state legislators also passed a state budget bill this year that created a state tax credit worth up to $150,000 annually for employers who provide on-site day care, the senator said.

Scavone is a member of the state’s Child Care Availability Task Force, created by the State Legislature in 2017, that is seeking to fix the infrastructure of child care through public and private support.

Quality, accessibility and affordability are needed so that parents won’t have to turn to patchwork child care, which Scavone said often puts increased pressure on grandparents.

Emily More says she is grateful to her mother and mother-in-law for their help, but she also recognizes there are limits to the patchwork system.

For her and her husband, that limit is fast approaching. The couple is expecting their second child in the fall.

“I think we are going to have to make some changes,” Emily More said. “I’m not sure what they are, but I think it is a lot to ask someone to watch two children under two.”

Rural counties such as Chautauqua have many child care deserts where either there are no day cares or the ones that are there have no vacancies.

Jennifer Colon of Fredonia learned this the hard way. Four months before her son was born in January, she began calling friends to try and find a day care, but had no luck and worried she would lose her job.

“When I started calling day cares, I was told that most of the mothers when they find out they are pregnant immediately start searching and are added to these waiting lists,” she said.

There was another issue as well. Colon wanted her son at a residential family day care because he had been born small, weighing 5 pounds. She believed he would get more attention in a caregiver’s home, rather than in a bigger child care center.

Her search continued into March when she found a day care, but there was a catch. It was in Jamestown, a 45-minute drive from her home.

Colon, who works as a health care coordinator visiting chronically ill individuals, had to shift her territory to the Jamestown area, where her employer, Evergreen Health Services, has an office.

“Quite frankly, I became depressed. I thought I was going to lose my job because I couldn’t find a day care,” Colon said. “Work isn’t going to say, ‘OK, you can be off until you find child care.’ ”

Colon says she is grateful for the child care subsidy she receives. Her monthly cost is about $140. Without the subsidy, she would be paying approximately $640 a month.

In the morning as parents drop their children off at the Westminster Early Childhood Programs, an education and child care center off Delaware Avenue, chimes fill the air with childhood songs, setting a happy tone.

For many of the parents, there’s another reason to be happy. The facility is on the edge of downtown, minutes from their jobs.

Both centers accommodate about 200 children and the waiting lists are long. In fact, both day care centers each have waiting lists of approximately 80 children from infants to preschool. Waits can be as long as a year or more, particularly for infants.

“So many young families are moving to town and there has been a trend over the last generation for both parents to work in order to have the lifestyle they want,” said Barbara Stone Reden, director of the Jewish Center's early childhood services.

Monthly child care rates at Westminster range from $1,498 for infants to $1,227 for preschoolers. Tuition, which covers most of the costs of the day care's salaries and supplies, can only be raised so much before “parents say, ‘Whoa, I can’t pay that anymore,’ ” said Cynthia Lynn-Garbe, Westminster’s director.

The key to success, according to officials at both day care centers, is staffing.

At the Jewish Center's infant rooms, instead of having the minimum required two adults tending to eight babies, there are three caregivers.

“What that does is cut the response time. The teachers are able to respond quickly and interact with the babies. It makes a huge difference, but staffing is our biggest cost,” Reden said.

At the Westminster center, in-house training keeps staff members up to date on state-mandated certifications that range from first aid and CPR to being able to identify shaken-baby syndrome.

But because the pay is low, there is a constant challenge to recruit dedicated workers, said Lynn-Garbe. She said it is difficult for day cares to compete for workers with retailers who sometimes pay above the state's minimum wage of $11.10 an hour in upstate New York. 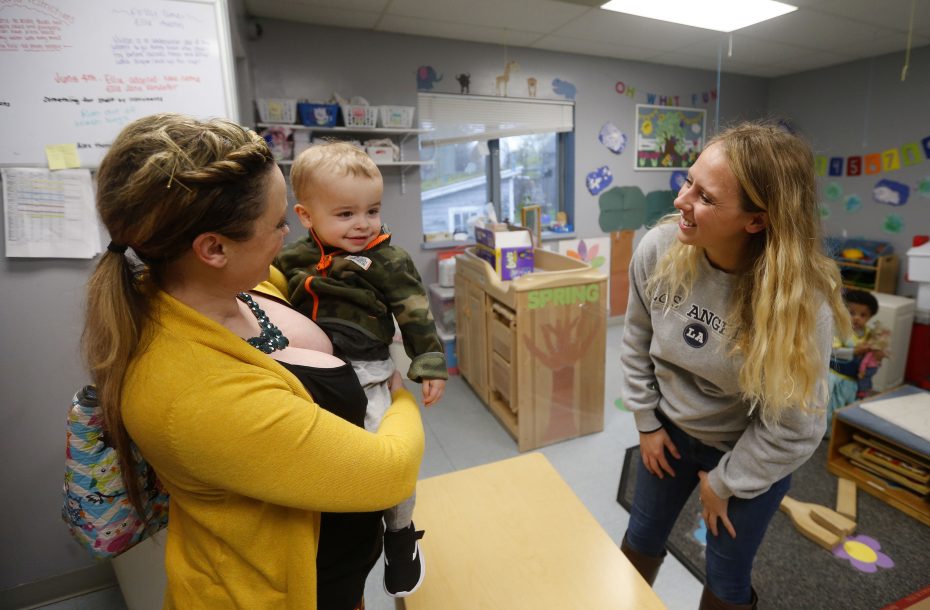 Sarah Durham said it took a year of searching to find a day care for her now 18-month-old son Braxton, photographed arriving for his first day at Creative Play Learning Center in Getzville, where he was greeted by staffer Stephanie Manhardt. (Mark Mulville/Buffalo News)

Sarah Durham says she and her boyfriend, Paul D’Angelo, are grateful that after about a year of searching they were able to finally find care for their now 18-month-old son, Braxton.

“We had made a big list of day cares and started calling them and had to ask the same questions over and over, hours, ages, and what services they provided. We weren’t very successful,” she said.

Durham, a pharmacist, said she wanted to return to the workforce, but couldn’t because it would not have been fair to ask D’Angelo, an engineer who works third shift at a manufacturing facility, to watch their son during the day.

The Getzville couple recently sought help from the Child Care Resource Network, which provided them with a streamlined list of day cares near their home along with profiles on each of the facilities that answered their questions.

In a matter of weeks, Braxton was enrolled in a day care.

It has turned out to be a win-win situation.

“We wanted him to have social interaction with other kids,” Durham said. “Now that I have time, I’m going to start looking for a job.”