“He wanted a network so he could get a job opportunity later,” said Sergio Serafin-Bazan, referring to his younger brother.

But police now are investigating if that tightknit fraternity network Serafin-Bazan wanted to be part of led to his April 17 death following a suspected hazing.

Emergency medical crews found him five days earlier unresponsive on the lawn of a house at 69 Custer St. where members of Sigma Pi fraternity were living. Buffalo police said they believe Serafin-Bazan was ordered to perform exercises late at night and early into that morning as part of pledging for the fraternity.

“I want the ones responsible to pay for it,” said Sergio Serafin-Bazan.

He said police have told him and his parents little about their investigation.

But he said he believes fraternity members in charge of the pledging “took advantage” of his brother, who was quiet and reserved and unlikely to say no to their demands.

The family has hired a lawyer, he said.

Sigma Pi has faced hazing accusations at five other university chapters across the country since 2015, including a case in November in which an Ohio University freshman died.

"This is not a new phenomenon for them. Their record, tragically, speaks for itself," said Sean Alto, an attorney for Wade and Kathleen Wiant.

The Wiants filed a lawsuit in February alleging that their son Collin, 18, died as a result of hazing by Sigma Pi members. The cause of Wiant's death was asphyxiation due to consumption of nitrous oxide, or whippets, according to the lawsuit, which alleges fraternity brothers forced Wiant to take the whippets. It also alleges that Wiant was deprived of sleep, beaten with a belt, punched and forced to drink a gallon of alcohol in an hour.

Ohio University expelled the Epsilon chapter of Sigma Pi in April after a university hearing board determined that it had engaged in various incidents of hazing, including forced calisthenics, whipping, beating and forced consumption of alcohol.

No one has been charged in connection with Wiant's death, but Athens, Ohio, police are still investigating.

The Wiants have been pushing to make hazing a felony crime in Ohio and for a new transparency law that would publicize student code of conduct violations by fraternity chapters at colleges and universities in Ohio.

Kathleen Wiant said she felt sick when she learned about another Sigma Pi death, five months after her son was killed.

"The fact that Sebastian died made me feel like, 'What could I have done?' How can it be the same fraternity?' " she said.

She urged parents to question their Sigma Pi fraternity-member sons about what is happening in their fraternity houses.

"Because national doesn't seem to know and if they do know they don't seem to be doing anything about it," said Wiant.

Four incidents involving Sigma Pi that were not fatal happened in December at California Polytechnic State University in San Luis Obispo, Calif., in 2016 at the University of Missouri in Columbia, Mo., and in 2015 at Hofstra University on Long Island and Clemson University in South Carolina.

Cal Poly suspended the Sigma Pi chapter until June 15 for making recruits attach suitcases to their legs and carry them around campus throughout the day, according to Mustang News, a student-run newspaper. The fraternity also gave alcohol to underage pledges during recruitment and pledging, the newspaper reported.

A Sigma Pi pledge at the University of Missouri was hospitalized in 2016 with a blood alcohol content of 0.34 and bruises on his buttocks, according to university documents obtained by the Missourian, a news organization. University administrators determined that the pledge had been hazed and found the fraternity guilty of paddling new members and forcing them to drink, according to the Missourian story.

At Hofstra, the student newspaper uncovered photos and videos showing Sigma Pi pledges being forced to chug milk and vomit on each other, being locked in small cages and being forced to kneel blindfolded while their bodies were covered with hot sauce.

A former member of the fraternity described the hazing as “human torture” and reported it in 2016 to the organization’s international office in Tennessee, which revoked the chapter’s charter. Hofstra also suspended Sigma Pi from campus.

Clemson University suspended Sigma Pi through 2020 after the fraternity subjected pledges in 2015 to inappropriate activities, including hazing and alcohol use. 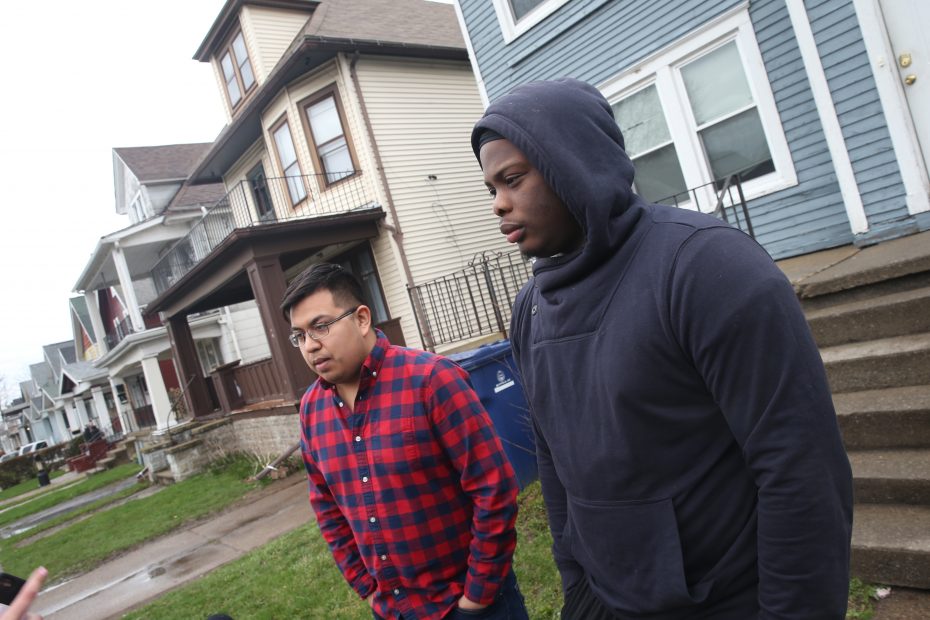 Custer Street neighbors Adam Rodriguez, left, and Lavontae Armwood talk about what they witnessed when a student was brought out between houses and police and rescue personnel worked on the passed-out male in the driveway. (John Hickey/News file photo)

Four or five fraternity brothers carried Serafin-Bazan, 18, outside the Custer Street house late on April 11, after he fell and hit the back of his head on a coffee table, according to accounts from neighbors who live on the street. One of the neighbors said one person stayed with Serafin-Bazan until an ambulance crew arrived shortly after midnight, and about 20 college-aged students fled the scene.

Sergio Serafin-Bazan said he believes his brother got sick because he was living in the unfinished basement of the Custer Street home and being awakened every few hours while pledging to join the fraternity.

The basement is where police found Serafin-Bazan’s suitcase and backpack, his brother said.

A police source said that Serafin-Bazan appeared to have been staying temporarily in the basement of the Custer Street house.

Serafin-Bazan was assigned to live in a dormitory on UB’s North Campus, with two other freshmen. Sergio Serafin-Bazan said one of the roommates told him that his brother hadn’t been to the room in two weeks.

Preliminary toxicology tests found that Serafin-Bazan had no drugs or alcohol in his system, according to police sources.

Buffalo Police Capt. Jeff Rinaldo and Erie County District Attorney John J. Flynn said the case was still under investigation, with investigators awaiting a final autopsy report, which will include more thorough toxicology tests that could take another month.

[Related: How do you prosecute hazing? It isn't easy, expert says]

Two residents of the Custer Street home declined to comment when approached last week by a reporter from The Buffalo News. They referred questions to Jonathan M. Frost, executive director and chief executive officer of Sigma Pi.

Frost did not respond to a voicemail and an email seeking comment.

Sergio Serafin-Bazan said his parents were grieving and did not want to talk publicly about the case.

Serafin-Bazan was a 2018 graduate of Port Chester High School in Westchester County.

A native of Peru, he came to the United States in 2008 and settled with his parents and two brothers in Port Chester.

He played soccer and was a fan of Real Madrid football club.

Sergio Serafin-Bazan described his brother as responsible and serious about his studies. In high school, he worked weekends at a country club and part-time as a cashier at a cafeteria. He also took a college course at a local college in his senior year of high school.

Serafin-Bazan's high school counselor said he was an independent, responsible and highly motivated student who came to school every day prepared and eager to learn.

"He was definitely very introspective about things. He was the kind of kid who took in all the information and then asked questions. He was just such a solid kid," said Stacey Cafaldo, school counselor. "If I had to describe him, he was just a class act. He was steadfast. You knew with him that he was always reliable, respectful."

Serafin-Bazan earned a 3.5 GPA in his first semester as a medical technology major at UB and was interested in working in the pharmaceutical industry, said Sergio Serafin-Bazan.

He also thought about getting a job on campus or in the Buffalo area, but his parents and brother urged against it.

"We made a deal: OK, we'll pay for everything. You don't need to work. Just focus on your studies. That's it," said Sergio Serafin-Bazan.

He said his brother struggled in his first semester with living away from home and making new friends. At the beginning of the semester, he said he wanted to transfer to a school closer to home, Sergio Serafin-Bazan said.

But Serafin-Bazan eventually found his stride and did well in his classes, said his brother.

"He liked his roommates. They were not really close friends, but they were really good," he said.

He said his brother told him he would stay at UB at least one more year.

But Serafin-Bazan didn't tell Sergio or their parents that he planned to join a fraternity. He only mentioned it to a younger brother, said Sergio Serafin-Bazan.