She reached for the pepper spray first.

Brandi Alexander faced three giant screens in the firearms training room at Buffalo Police Headquarters. The simulated domestic disturbance call unfolded before her: A man appears to be hitting a woman in a car as they're driving. He parks in a driveway between two houses and they get out. The man is getting more belligerent.

"I'm going to mace him," Alexander said, as she points her device toward the man on the screen.

She sprayed him, but it didn't seem to affect the man, who then attacked the woman who was in his car.

Alexander quickly pulled out a handgun from her holster and opened fire. The video abruptly ended.

Officer Nicholas Poblocki pointed to a blue mark that appeared, showing where the bullet landed in the simulation – the house.

The scenario is the kind of tense situation police officers are trained to deal with when they respond to a 911 call or pull over a driver. It was exactly what Buffalo police wanted participants to experience at the department's first Police and Community Together Buffalo Citizen Police Academy.

Several local police departments have offered citizens academies, including Amherst and Cheektowaga, but this is the Buffalo Police Department's first one, said Deputy Commissioner Barbara Lark.

"It gives people an appreciation of the things officers face," Lark said. 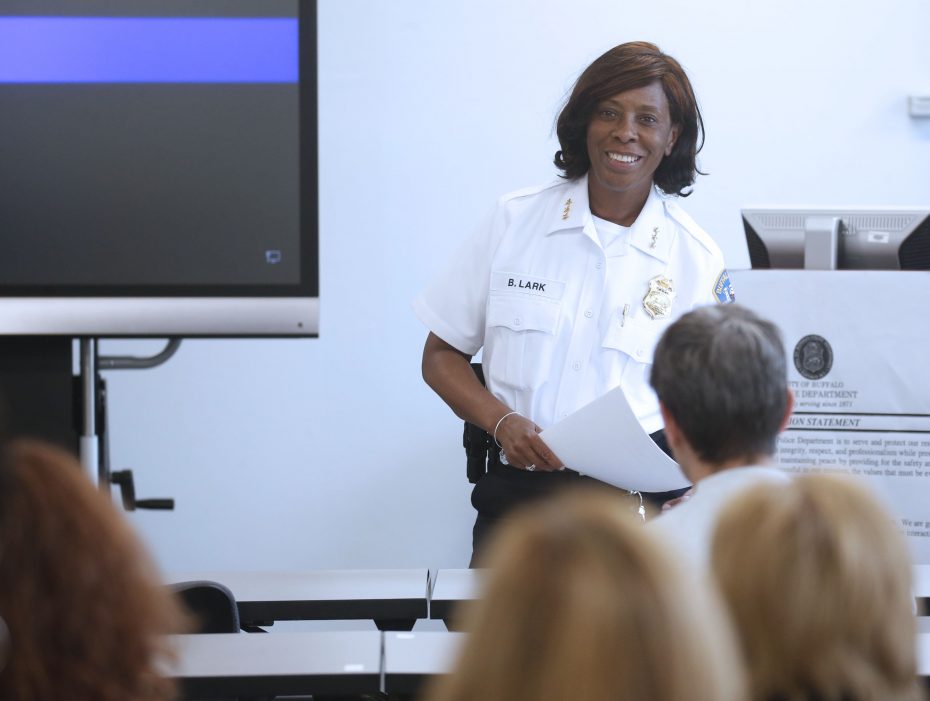 Deputy Commissioner Barbara Lark introduces herself to the group at an evening session of the Citizen Police Academy. (Robert Kirkham/Buffalo News)

It's part of Mayor Byron Brown and Police Commissioner Byron Lockwood's effort to increase community policing. Last year, the Neighborhood Engagement Team debuted. This year, the department started the citizens academy and is getting ready to start an Explorers program for youngsters interested in becoming law enforcement officers.

A little over two dozen people signed up for the eight-week citizens academy, which began May 1 and is led by Lark and Capt. Steven Nichols. About a third of the class is getting ready to take the exam to be police officers. Some are city employees.

The academy isn't about training to become a police officer, said Nichols, who heads the department's community outreach efforts.

"We just want them to walk away with a little more understanding of what we do and some of the emotion that goes into it," Nichols said.

So far, the participants have toured the police and fire 911 dispatch centers, role-played what to do when stopped by the police, and learned about how police work with community groups including the Peacemakers and the Stop the Violence Coalition.

On Wednesday, they were offered the opportunity to try the police department's shooting simulator and to go on a ride-along with a police officer on patrol.

"You're going to see firsthand for yourselves some of the situations police officers face," Nichols told the class. "You're going to have to make a split-second decision – to shoot or not to shoot."

The citizens used the department's VirTra V-180 shooting simulator. A range of scenarios are projected onto its three 10-foot-by-7.5-foot screens, from a panhandler with his hands in his pockets to a crazed, knife-wielding man charging straight ahead.

They're "armed" with a handgun loaded with CO2 cartridges and mock pepper spray that they wear on a holster. 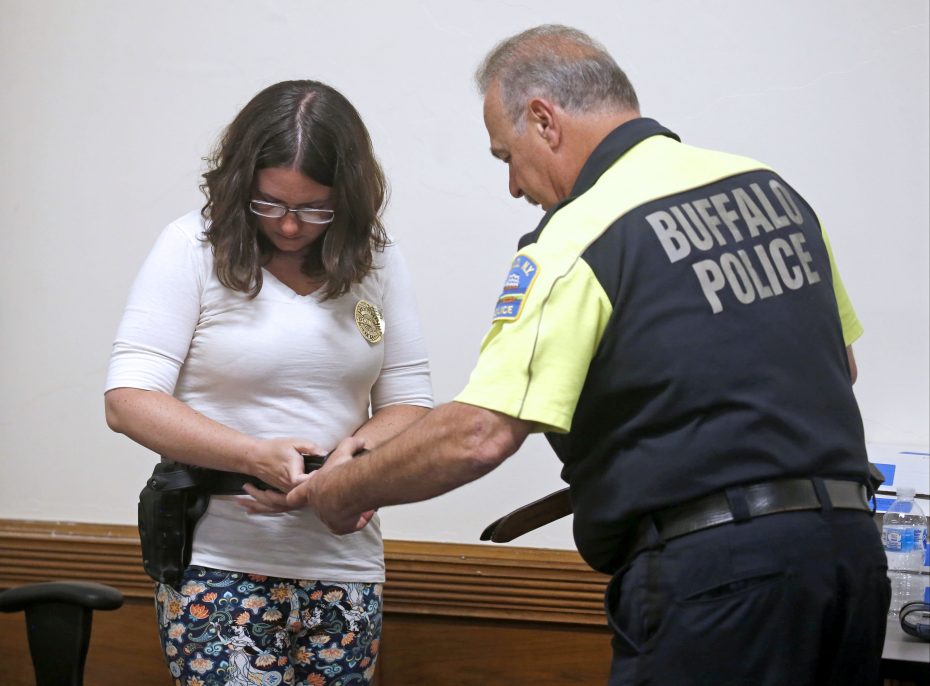 Alexander's turn on the simulator was a tricky one. The computer showed that the pepper spray she used didn't hit the man, and she ended up firing her gun at an unarmed person.

"I probably would have pulled him over sooner," Alexander said.

"He's going to stop where he wants to stop," Lark said.

"It was very real-life-like," Alexander said about her experience.

She's a nursing student at SUNY Erie Community College who has thought about pursuing a career in law enforcement. "Your heart just started pumping. I liked it, though."

Abdalla Mohamud, a public works employee who came to Buffalo as a refugee, had a tough turn on the simulator, too.

He was confronted with an agitated man in a cafeteria. The man got down on the ground on the left screen, but then on the right screen, a woman sneaked out, followed by a second woman with a knife. The woman tossed the knife to the side as the man on the ground pulled out a gun and opened fire.

Mohamud shook his head. He hadn't seen it coming. But, he said, it was a good learning experience.

Murray Holman, executive director of the Stop the Violence Coalition, said he wishes more people could experience the simulator, especially from communities where there's tension with law enforcement. "You see how decisions run through an officer's mind," he said. "To take someone's life, what that's like for the officer, for the community."

"This is a great tool," he said. "You can see how fast things can fall apart."

Riding along on patrol

Ride-alongs in patrol cars were another part of the class. The citizens strapped on bullet-proof vests and patrolled the streets with police officers.

Brooke Herrington, who works as an accounts manager at a industrial safety company, rode with Officer Matthew Inglit.

Driving along Broadway, Inglit spotted a SUV with no front license plate, so he flipped on his lights and pulled over the driver. 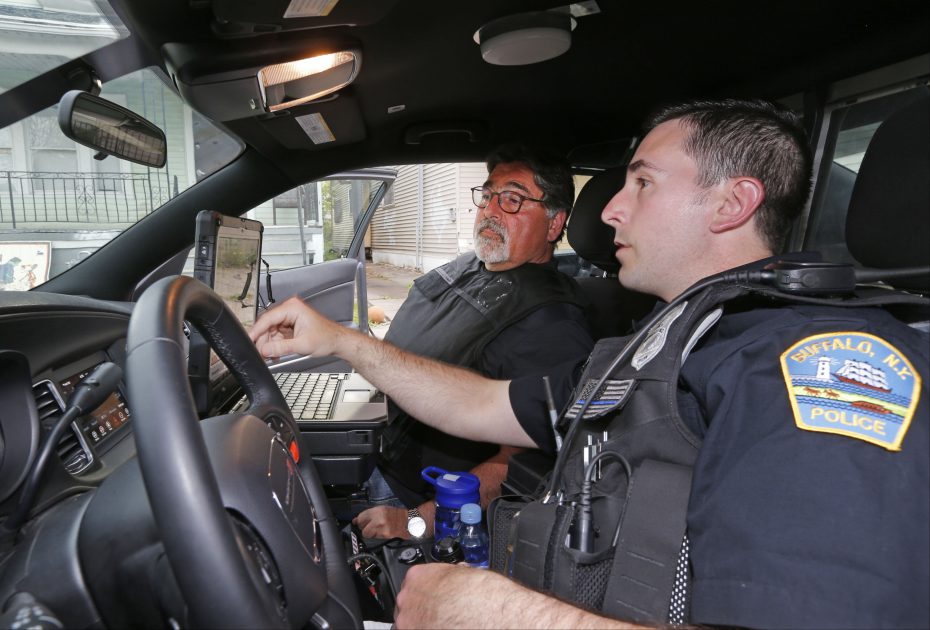 Herrington stood on the sidewalk and watched as Inglit and a lieutenant approached both sides of the vehicle and noticed marijuana smoke. They directed the driver and his passenger to get out, patted them down and put each in the back of their patrol cars.

Inside the vehicle, the officers found two plastic bags of marijuana, about an ounce in each package.

As the officers searched the rest of vehicle, they let Harrington look inside, showing her compartments that looked like they were loose or had been moved.

"I saw the whole process they have to go through when they pull someone over, the proper way to approach the vehicle, to make sure everyone's safety is first," Herrington said.

In the end, the officers ended up ticketing the driver for the missing plate and seizing the marijuana.

Inglit and Herrington took the marijuana to the Erie County Central Police Services building on Elm Street to be submitted for destruction.

"It's a lot of paperwork," she noted.

Herrington signed up to take the Buffalo police exam in June and has been taking fitness classes to prepare for the physical test. She's already taken the test to be a state trooper, but she said she's really liked the experience at the Buffalo Police Department's citizens academy.

"I really want to work with the community," she said.

After the ride-along was over, Herrington called her father. He's been uneasy about the idea of his daughter going into law enforcement. 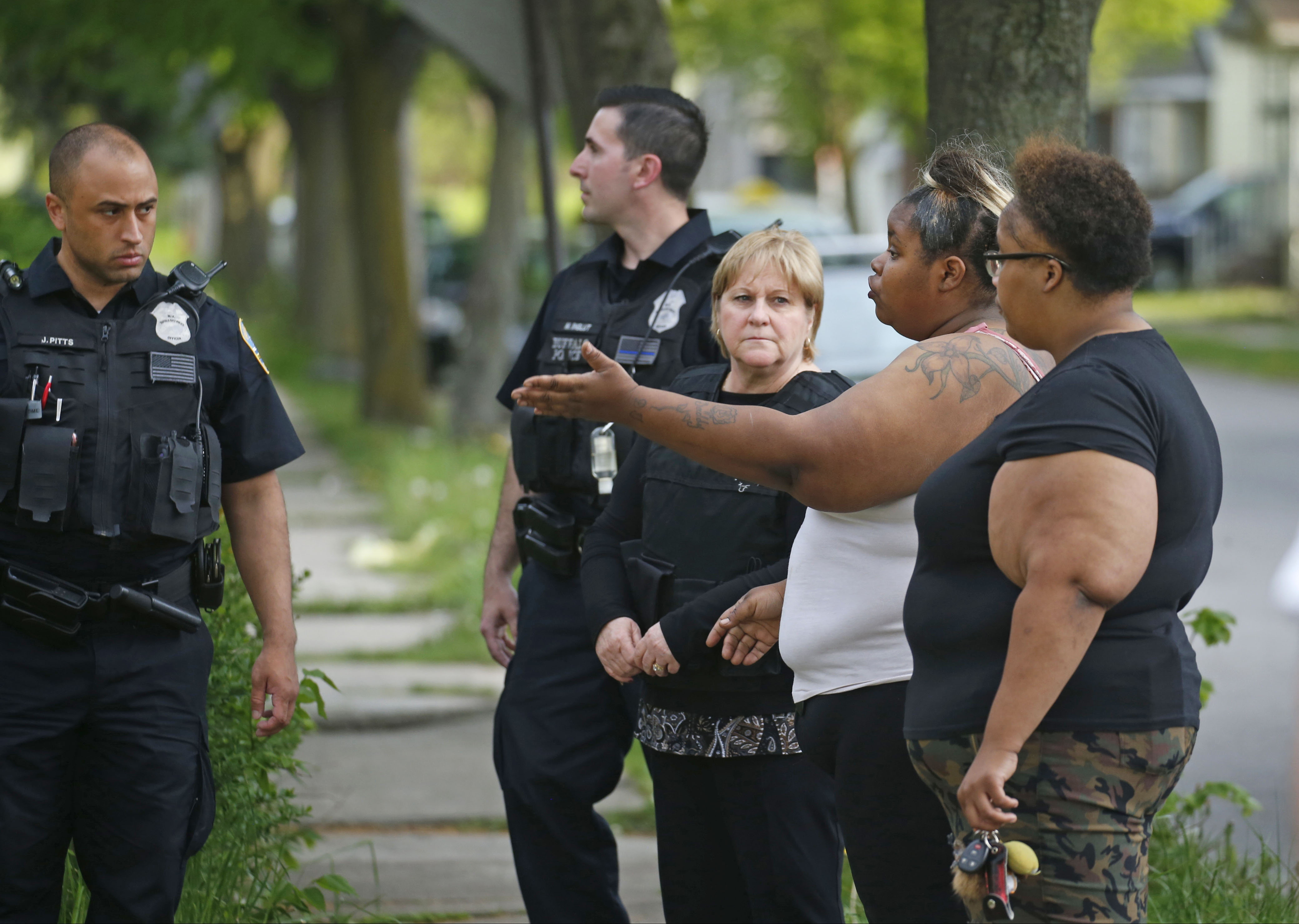 Police officers Justin Pitts, left, and Matthew Inglut with Citizen Police Academy participant Debbie Notogowski, third from left, as they investigate a 911 call about a man threatening people with a razor and screwdriver in the Broadway-Fillmore district. (Robert Kirkham/Buffalo News)