Jim Holler, curiosity locked in, was content at first to watch. This was about two years ago, when a new kid showed up with a wooden motorboat that needed work, lots of it, at the Antique and Classic Boat Society, which makes its home in an old foundry occupied by the Buffalo Maritime Center on Arthur Street.

Holler, now 92, is a well-loved elder within the legion of gray-haired guys in jeans and T-shirts with sawdust on their hands who seem to always be there, building or restoring wooden boats. One by one, during Adam Curcio's first days at the center, they quietly moved toward his 18-foot vessel, a Grady-White Hatteras, and gave him a stark analysis.

If saving the 57-year-old wooden boat was his dream, it was a dream in trouble. There was rot eating up the keel and the wood surrounding it. Some told him the boat might need cutting back, which they saw as better than losing the whole thing. Others shook their heads and wondered if the best move was simply thinking about another boat.

Holler listened, then quietly walked up and arrived at his own judgment. He looked over the places that were visibly falling apart. He asked a few questions before turning toward Curcio with this conclusion.

Curcio, only a teenager at the time, admits that he wondered:

"What does this old guy know?" 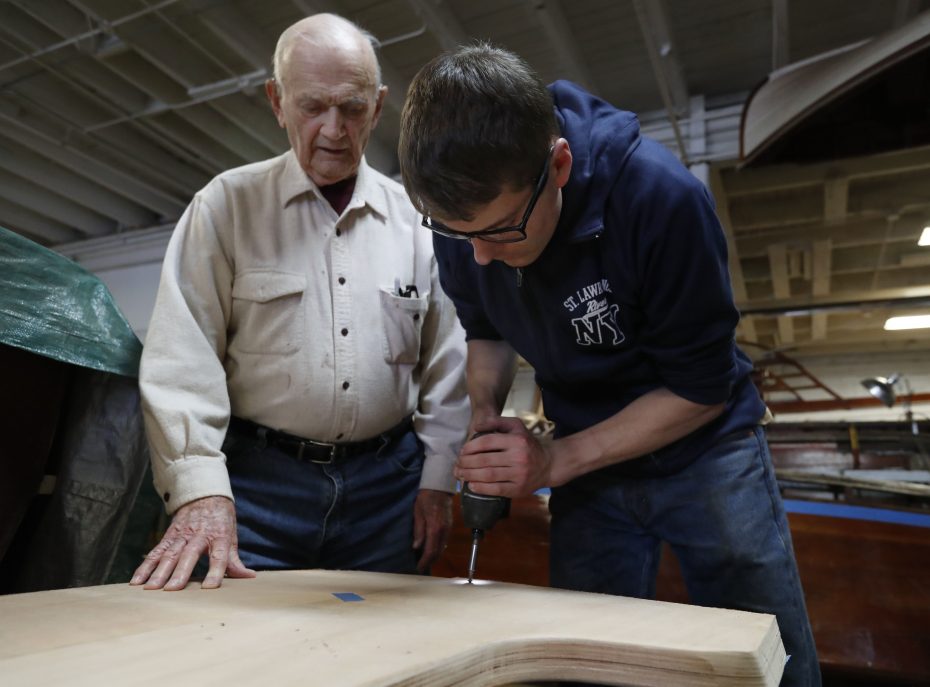 Adam Curcio, 21, and Jim Holler, 92, working side by side on the transom of Curcio's 57-year-old boat. (Sharon Cantillon/Buffalo News)

He did not wonder for long. Holler's father spent a lifetime building boats, while his grandfather had a North Tonawanda boathouse along the Erie Canal. Jim Holler put together his first sailboat by the time he was 10. He served in the Navy just after World War II, before retiring as a project manager after 38 years with Keller Technology in Tonawanda.

Even now, he sees no advantage in slowing down. As a widower, he is a revered presence amid the antique boat lovers at the Maritime Center. Curcio, a young man from East Amherst with scant nautical background, said Holler showed him far more than the intricacies of what holds a wooden boat together.

"He's taught me to be a better person," Curcio said.

From Holler's perspective, "The greatest challenge might of been gaining his confidence in what we were trying to accomplish." Once that happened, Curcio totally bought in. At 21, he does not carry a cellphone because it might distract him from whatever task is at hand. Even the tale of how he received the boat has a soulful quality.

It came to him after the death of Bob Reilly, a close friend of Curcio's father, Brad. As a child, Curcio often tagged along when the two men, teachers at Williamsville North High School, traveled to classic car shows. Reilly was an astronomy teacher who enjoyed sharing the skills he knew with Curcio, even helping him to paint and install a new car door for his 2001 Kia.

More than four years ago, Reilly died of cancer before he had a chance to restore the boat himself. His wife, Jan, conscious of how badly Reilly wanted to see the Grady-White brought back, had no doubt about what to do with it.

"We watched Adam grow up, become a very nice man, and I knew my husband would be very happy to see the boat go to him," said Jan, who remembered how the couple found the boat years ago, spotting it for sale in a yard while riding their motorcycles.

With all that in mind, Curcio knew he would name the vessel in Reilly's honor. His goal was putting it in the water and taking it to Florida, where Curcio wants to build his career. The boat would honor the strong roots of his old life and be the basis for a new one. It was all good, all inspiring, except for one thing.

As it was, the Grady-White would almost certainly sink. 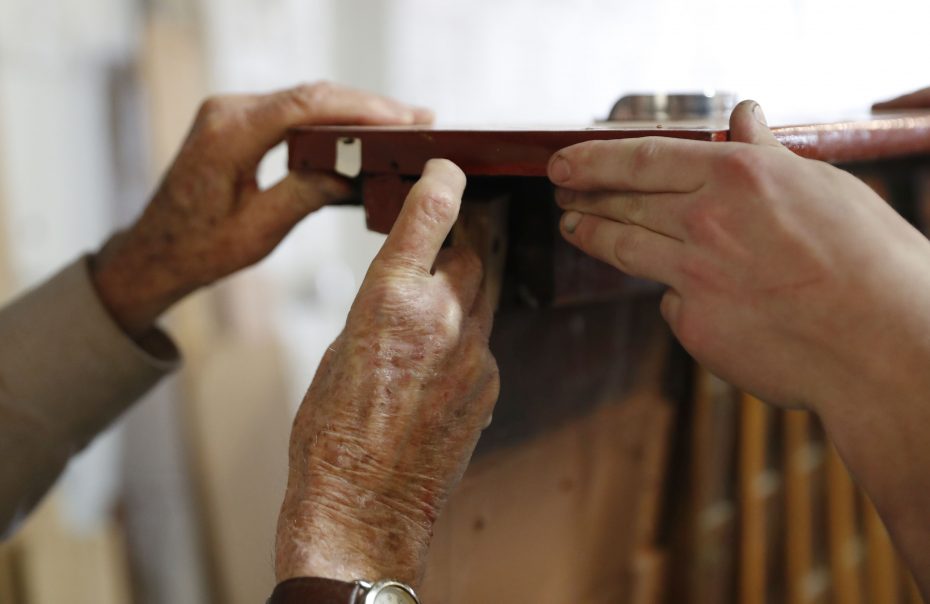 The hands of Adam Curcio and Jim Holler as they work together at the Buffalo Maritime Center. (Sharon Cantillon/Buffalo News)

In examining the boat, Curcio felt a soft spot, prodded it with a pencil – and the pencil went right through. Much of the wood was rotten. His father told him how he and Reilly had mutual friends who spoke with admiration of the Buffalo Maritime Center, the old foundry that is one of the most astounding spots in Buffalo.

The complex is filled with ancient wooden boats, the smell of sawdust and white-haired volunteers intent on helping anyone who walks through the door, including many teenagers from city schools. In the space maintained by the antique boat society, the regulars sometimes hang around, restoring boats, deep into the night.

Once Curcio went there on his father's advice, a lot of people thought his only hope was to start cutting.

“I could see what was developing,” he said. “My God, it would be a bigger can of worms. Do that, and you’d destroy the function of the boat.”

Look, he told the kid, there was a way to do this while only losing a couple of inches of wood. It would take a "long game" mindset where you hardly think about finishing and focus on what you need to do week by week, even minute by minute - such as the maddening chore of scraping off  four or five coats of old paint.

Another regular, Jeff Witkop, brought in his own Grady-White from Waterport and soon found himself pitching in with Holler and Curcio. He said the kinship between a 92-year-old and his pupil, more than four times younger, is a compelling thing to watch.

"He's anxious to get it in the water," Witkop said of Curcio, "and that excitement is a good thing, but sometimes Jim has to throttle him down."

Curcio arrived in 2017. There were moments, he admits, when he felt overwhelmed. Something in Holler’s demeanor kept him moving, the way the older man identified about 12 specific places of repair, each one involving its own particular challenge.

“There was rot in the freeboard,” Holler said. “The inner keel was completely rotted. Forty ribs were rotted at the junction point to the keel, and there was severe damage in the transom area.”

Still, this was the judgment that mattered:

“The bottom planks were sufficiently sound to restore the boat,” Holler said.

Sean Kirst
At a gateway to Riverside, a true believer looks for better sidewalks
On Memorial Day, remembering her dad's close call at end of World War II
For Memorial Day, Covid-19 survivor keeps faith with sister lost to Spanish flu
For Joey Giambra, with family, friends and Buffalo: 'It stuck to him forever'
More Stories

They meet every Tuesday afternoon, after Curcio finishes his daily shift as a welder, and they do it again on Saturdays, when they have more time. Curcio's parents, Brad and Pam, sometimes stop by, marveling at the transformation in Bob Reilly's old boat and at the way this onetime stranger looks out for their son.

"He means the world to us," Pam said of Holler, while her husband describes him as "a walking encyclopedia of class and creativity."

Curcio, who often shows up throughout the week to work on the boat himself, can finally allow himself to visualize an ending. He would like to give the boat a test run by late summer – Holler, of course, will join him on board – before they spend the winter doing whatever they need to completely finish.

If all goes well, a year from now, Curcio will have the boat in the water, a vessel held together by three years of his life. Once that happens, Holler will look around and join in on another restoration at the foundry, because these efforts, to him, equate to meaning itself.

"It's working with your hands, and doing something that would not have been done otherwise," he said. "We live in a throwaway society, and once you're finished with a job like this you know you've repaired something, that you've really done something."

There it is. As Curcio learned, Holler handles words and sentences like his materials. Make them watertight, think well before you use them, and they last.