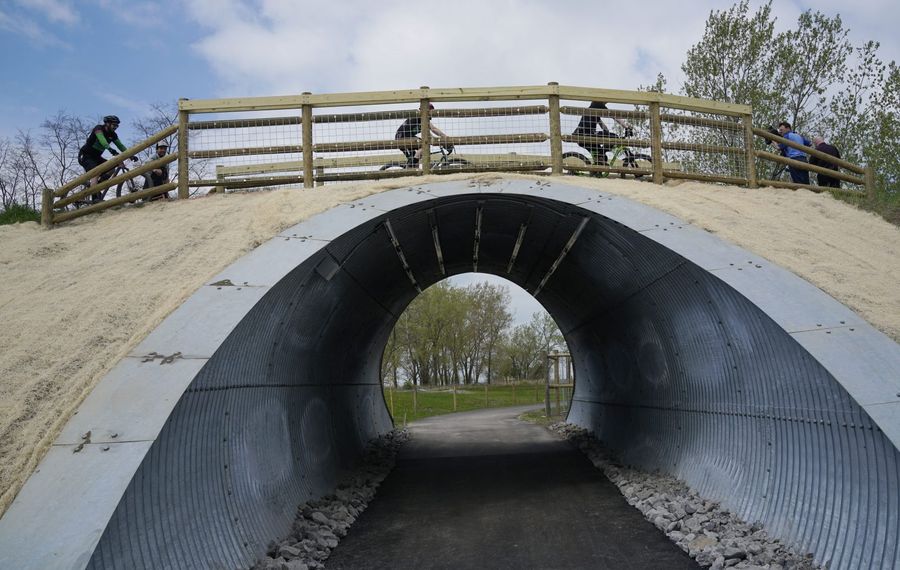 Alex Davies typically traveled 40 to 90 minutes for his off-road biking.

So there was excitement in his voice as he looked out over Lakeside Bike Park that officially opened Friday on the southern end of the Outer Harbor.

"I'm super excited. There is nothing at all like this in the city," said Davies, who co-owns Campus WheelWorks on Elmwood Avenue.

Helmeted riders rode their mountain bikes and BMX bikes on the blacktopped Tot Track and Pump Track, while others pedaled along the three new multiuse dirt trail loops, all built with $5 million from the state's Buffalo Billion economic program.

Environmentalists also had reason to be pleased. Each of the five off-road biking areas and a nearby event lawn big enough to seat 7,000 for concerts includes habitat restoration projects.

A tunnel goes under one of the trails, designed as an entrance to the lawn area for security purposes and to help protect the ecology.

"Being a mountain biker, I love the dirt trails," Paul Marko said. "They are excellent for beginners getting into the sport, but anyone can have fun on all of them."

Jacob Bodway, the mountain bike group's president, said the new bike-riding courses are a great addition to the city.

"The trails are really good," Bodway said. "I think it's going to draw a lot of people, and it's another example of Buffalo's resurgence."

"Making off-road biking accessible to a broader community, especially youth, was a priority," said architect Kathryn Wolf of Trowbridge Wolf Michaels Landscape Architects, an Ithaca firm. So were pollinator meadows and habitat restoration areas for native plants with deer exclusion fences so the vegetation has a chance to grow.

"Currently, there is very little quality habitat on the Outer Harbor," Wolf said.

The area was planted with vegetation selected for the food and habitat it provides specific species of migratory birds that come to the Outer Harbor, Wolf said.

"I'm incredibly happy with the job that has been done," said Constance Lydon, a landscape designer and a board member of the Erie Canal Harbor Development Corp., which approved the projects.

"They really paid attention to what the community asked for, and were careful every step of the way," Lyons said.

The pump track operates as a series of curves, ramps, banked turns and dips, with bicyclists gaining enough momentum to not have to pedal.

Pollutro, who wore a helmet, said that happens "at least four or five times. You gotta get it in, that's what makes it fun."

His son had more padding, including kneepads.

"I do worry [about him], but I'd rather let him have the fun," Pollutro said.

Pollutro liked the addition of the bike park.

"I'm just glad it's here, and that the city did something other than for road bikes," he said.

Davies said he hopes the new off-road experiences will attract young riders to a form of recreation they may not have tried before.

He noted he had seen some hybrid bikes with smooth tires amidst the mountain bikes and BMXs.

"You're really not limited by the style of bike you own," Davies said.