Jack Eichel has played in multiple international competitions for Team USA and had some solid moments this year at the World Championships in Slovakia before the Americans lost, 4-3, to Russia in Thursday's quarterfinals.

Team USA went 5-3 and Eichel had two goals and eight points in the eight games. Fair enough. A good showing. But from the Sabres' perspective, the most interesting story has been the play of Sam Reinhart for Team Canada.

Reinhart last played internationally in 2016 as a 20-year-old and did not score in the 10 games. In 2015, he joined Connor McDavid as one of the key players on the team that won World Juniors gold in Toronto, but he had not made much impact for his national team since then.

That has changed in this tournament. Heading into Saturday's semifinal with the Czech Republic, Reinhart is tied for third on the team with three goals and has five points in eight games.

Sabres coach Ralph Krueger is in Slovakia watching the Worlds with General Manager Jason Botterill. TSN reported Friday that Krueger has met with Eichel overseas and texted or spoke with several Sabres players, including pending free agent Jeff Skinner. The network said Krueger's sit-down with Reinhart was scheduled for Friday, on Team Canada's off day before the medal round.

Reinhart became a much bigger piece for the Sabres this season, blowing away his career highs in assists (43), points (65) and average ice time (18:57) while scoring 22 goals. His Corsi rating at even strength was over 51 percent for the second consecutive year.

Last season was Reinhart's first of the two-year, $7.3 million bridge contract he signed during training camp. It was a show-me deal for the Sabres and a bet-on-me deal for Reinhart. Advantage to the player in Year 1.

It was important for Reinhart to play well for Team Canada, with Botterill serving as a key member of the management team. It was important for him to keep his momentum going from the season and to parlay a good showing overseas into a good start to next season under a new coach. And to continue to give him more leverage for a big-money, long-term deal.

Media Day for the Stanley Cup final is Sunday in TD Garden, as the Blues and Boston Bruins meet reporters in advance of the series opener Monday night.

Boston and St. Louis last met for the Cup in 1970 in the last time the Blues made it to the final. It ended, of course, in a four-game Bruins sweep on the iconic Bobby Orr overtime goal. The Boston-St. Louis matchup is the only one that's taken place in the championship round of all four major pro sports, and Boston has gone 7-3 in the 10 meetings.

Aside from the '70 Stanley cup, the rundown of the other three matchups:

• The Patriots and the (St. Louis) Rams met in 2002 in Super Bowl XXXVI, when Adam Vinatieri's last-play field goal gave the Pats the first of their six Lombardi Trophies.

Commissioner Gary Bettman is slated to have his annual Cup final media address Monday night, and it's likely that replays and the state of officiating will be the major topic of inquiry. You would also expect Bettman to get some questions on the state of women's hockey and what kind of commitment the NHL is prepared to make to kick-start a professional women's league.

The list of unrestricted free agents include Erik Karlsson, captain Joe Pavelski and 39-year-old Joe Thornton, who could be retiring. Wingers Joonas Donskoi and Gustav Nyquist are also UFAs (and either could be attractive to the Sabres as depth forwards). Restricted free agents Timo Meier and Kevin Labanc will be due raises, with Meier likely to get a significant bump.

“I feel like I can still play, that’s for sure,” Thornton said Thursday.,“but I haven’t made any decision at all yet. I’m a Shark. I’m a Shark. There’s one team, and it’s here.”

“He’s the face of the organization,” said DeBoer. "He gave everything he’s got and should be there. It’s hard not to feel responsibility in not helping him get where he belongs.”

Karlsson had to lose money going forward with his injury-plagued season that saw him unable to finish the West final. You wonder how much of a fit he will be in San Jose going forward.

"It’s still tough to realize we’re not playing today," GM Doug Wilson said Thursday. "Having said that, I look at the calendar, I know I have to get to work and get some decisions done.”

The Sharks couldn't overcome the Blues' momentum or their own injuries and have now taken over the mantle from the Capitals as the best team to never win a Stanley Cup. San Jose has made the Cup final just once, losing to Pittsburgh in 2016, and has played in the West final five times in its history.

Joe Thornton says he’s not sure yet whether he’ll return next season pic.twitter.com/t49N6iFqpH

Hughes or Kakko? Kakko or Hughes?

Does the six-goal performance of Kaapo Kakko with Finland at the World Championships give the Devils pause to draft him No. 1 over American Jack Hughes next month in Vancouver? Hughes played only sporadically for Team USA and was a healthy scratch against Canada. It will be interesting to take the temperature of the players when they hit town for the annual Scouting Combine at HarborCenter.

The Devils are the team in the tough spot here, with the decision to make. The Rangers are sitting pretty at No. 2: They simply take whichever guy is left and Rangers assistant GM Chris Drury set the scene for TSN in Bratislava last week.

Drury on Hughes: "Jack has fit in nicely. He’s not playing the 20-plus minutes he’s used to for the [National Development Team] all winter, but he learned a lot, he’s sitting next to [Patrick] Kane in the locker room, that’s never a bad thing. I think every day he’s just trying to fit in more and more and get better and better.”

Drury on Kakko: "He’s an impressive player, no question. As far as his body goes, he already kind of has that man’s body and he’s 6-foot-3. Playing against older guys much longer than Jack has, but I think we’re in a great spot. I think either way we’re getting a hell of a player and I know Jersey is, too, so I think we’re both excited.”

• The other big story out of the Worlds has been how good Leafs forward William Nylander looked for Sweden, as he entered the weekend leading the tournament with 18 points in eight games (five goals, 13 assists).

The Rikard Gronborg-led Swedes are not going to three-peat a gold medal, however, as they were upset in the quarterfinals by archrival Finland in overtime.

• There has been lots of chatter the last couple of days about the Penguins trading Phil Kessel to Minnesota in a deal to include Wild forward Jason Zucker in a move first rumored by the Athletic. Kessel, who has a modified no-trade clause, would have to approve. It would be the first big piece sent packing by the Pens from their 2016 and 2017 Cup champs.

You would think GM Jim Rutherford will talk to old friend Botterill about something again this offseason after Buffalo acquired Conor Sheary and Matt Hunwick from the Pens last year. Just as long as it's not Kessel. A defensively indifferent player at age 31 is not what the Sabres need (and you would assume there's little chance Kessel would accept a deal here anyway).

• With Anaheim likely to hire Dallas Eakins after the AHL playoffs are over, the one big coaching uncertainty lies in Edmonton. Former Arizona boss Dave Tippett, who didn't get the Sabres job, remains the favorite. But the Oilers might wait until new GM Ken Holland is done here at the Combine before finalizing their choice.

• Glen Sather stepped down as president of the Rangers and, as expected, longtime former New York goalie and broadcaster John Davidson left Columbus last week to take the same role in New York. Sather's departure also meant the end for Greater Buffalo Sports Hall of Famer and former Sabres captain Jim Schoenfeld, who stepped down from his post as senior vice president and assistant GM.

Schoenfeld, 66, had served the Rangers in multiple roles over the last 17 seasons. He served 14 years as GM of the Rangers' AHL affiliate in Hartford, a role that Drury took over in 2017. 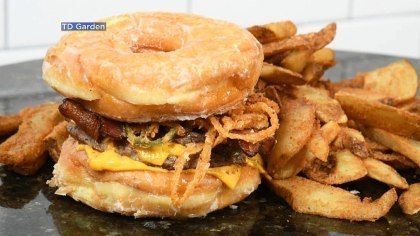 The doughnut burger — a double cheeseburger between two glazed doughnuts with bacon, fried jalapeños and onions — will be served at TD Garden during the Stanley Cup final. (TD Garden photo)

• Delaware North, the Buffalo-based company that owns the Bruins, is coming out with some exotic concession choices in TD Garden for the Cup final. The most notable is the doughnut burger, a double cheeseburger between two glazed doughnuts with bacon, fried jalapeños and onions.

There are also shrimp and steak skewers; a footlong hot dog with bacon, steak and cheese; a deep-fried Oreo sundae; a macaroni and cheese waffle bowl; and a baguette stuffed with a choice of pasta and meatballs or chicken and broccoli.