Somewhere in Christian Veilleux’s busy schedule, he made time last week to throw footballs for an audience that included assistant coaches from Michigan State, Virginia Tech and Boston College.

Squeezed to one half of Tripi Field, with the Canisius High lacrosse team practicing behind him, the Crusaders’ junior quarterback threw crisp, fluid passes to receivers. Some were short passes. Others were long, looping passes. A few of the receivers couldn’t keep up with the distance or the velocity.

Veilleux was in control on the field. He was just as poised off the field about an hour later, when he discussed his quick ascent into a college quarterback prospect at Canisius.

Less than a year after he came to the United States from Ottawa to pursue becoming a college football player, the 16-year-old already faces some big decisions. He has 14 scholarship offers with more expected, but before he can decide where to go to college, he has to decide if he’ll be a part of the 2020 recruiting class or the 2021 recruiting class. He also must decide if he will stay at Canisius.

“At this point in my life, I have a lot of decisions,” Veilleux said. “Choosing what school to go to, for college, is huge. It affects your whole future. That’s a big thing that can influence my maturity. Moving from home, I’ve matured so much. This has made me grow up faster than a normal kid would, and that’s really going to help me in the future.

“Any time I’ll have a really tough decision, I’m already going to have been through one.”

When he was 8 or 9 years old, Veilleux boasted to his mother, Lynn, that he was going to be the next Peyton Manning – his father’s favorite football player. But like most kids, he did not have any idea what the path would look like to become a serious football prospect.

He did not start playing until he was 10. The Canadian game has subtle differences – fields are 110 yards long and 65 yards wide, goal posts are placed in the front of the end zone rather than the back, and teams have three downs to convert 10 yards.

Veilleux was working out in Ottawa in 2017 when several University at Buffalo coaches had come to visit another player. The coach noticed Veilleux and invited him to a camp on campus. While there, UB offered him his first scholarship. He had just turned 15.

That’s when Veilleux realized he had a future in football. That’s when he and his family knew that if he wanted to get serious about that future, they’d have to make some choices, especially as he sprouted into a 6-foot-4, 190-pound quarterback with a precise arm, agile movement and strong field vision.

“We realized early on, if you’re going to achieve your goal of playing at a major college, you have to give yourself some credibility and show what you’re doing in the States,” said Martin Veilleux, Christian’s father. “If that was the path and the dream he wanted to pursue, to do that, he had move to the States.”

The family looked at many schools in Florida, Pennsylvania, New Jersey and New York, but decided on Canisius. The school is roughly six hours away from home and he would board with a family instead of living in a dorm. The program also had produced 20 Division I recruits in the previous five years and Veilleux quickly built strong relationships with the coaching staff.

He threw for 1,699 yards and 17 touchdowns, and was intercepted eight times in 10 games in 2018 in his first season at Canisius. But his most impressive performance came Sept. 28 at New Era Field, where he steered a 10-play drive in the final two minutes to lift the Crusaders to a 34-28 win against St. Joe’s.

“He’s a (Division I) caliber quarterback for a reason," teammate Jason Martin said of Veilleux, after the win.

While he’s a junior at Canisius, Veilleux has the option to classify as a 2021 recruit, which would mean he would have to complete a postgraduate year at a prep school before joining a college program in the fall of 2021.

That could mean he leaves Canisius after one season to go to another school that would allow him to play as a senior and as a postgraduate.

Or it could mean staying at Canisius, graduating next spring and then transferring to a prep school for a postgraduate year.

“We need to make that decision on our own, and what’s best for his situation,” Martin Veilleux said.

The major national recruiting services have yet to assign Christian a ranking in the class of 2020 or 2021, but Brian Dohn, a national recruiting analyst with 247Sports, said what’s made Veilleux into a college prospect is his body of work as a pro-style quarterback who has a strong upside.

“It doesn’t matter what class he’s in, because his ball movement and his arm strength is going to get better," Dohn said. "If he does move to another class, he’s still going to be a highly recruited kid. But if he goes into the 2021 class, it gets him the chance to get out, to see more schools and to throw for some  schools, so he can get on the radar of more of those schools." 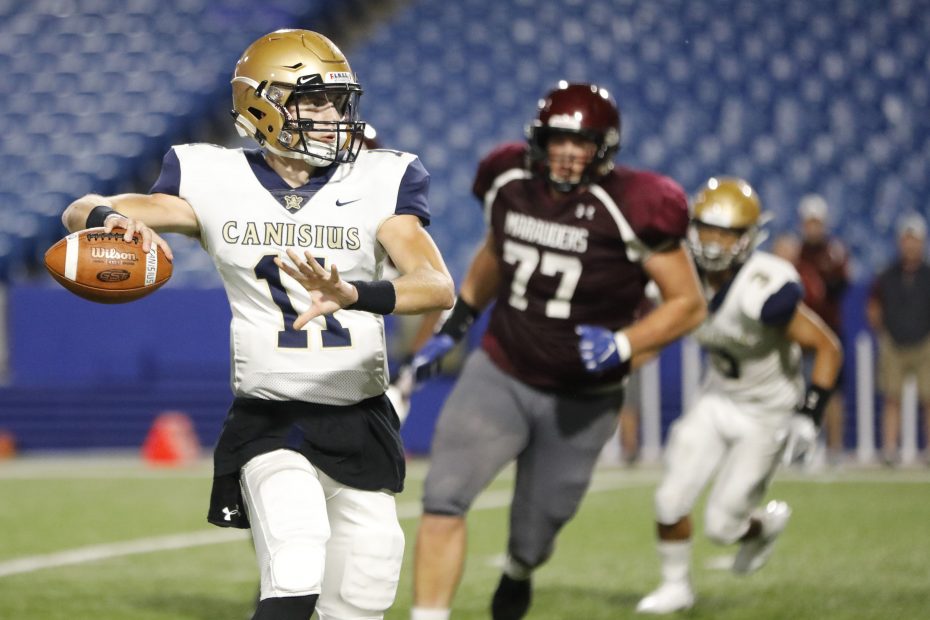 Veilleux's social media accounts are a digital road map in college football recruiting. He chronicles not only his scholarship offers but his visits, his training sessions and the camps he's attended. That included being named the most valuable player at the the prestigious Elite 11 Regional quarterback event in Ohio in March.

His most recent scholarship offer was from West Virginia on May 14, less than a week after he received an offer from Kentucky.

Veilleux's visits are fact-finding missions, though, at this point.

“Most of the time, when I go to campuses, I’m trying to meet with coaching staffs and get a feel for how they do things, how they run with their team and how they run their offenses,” Veilleux said. “I love doing that, and seeing how student life is, where the campus is located and what the vibe is on campus. That’s really important. I wouldn’t go to a school before actually going to visit and knowing what it’s like.”

The travel can be a grind. Sometimes his father drives from Ottawa to Buffalo and takes his son to campuses within driving distance of Canisius. Other times, they meet in airports and travel to colleges.

“We started this process with the ultimate goal of getting a free education, but” – and Martin Veilleux laughed – “it ain’t going to be free.

"But it’s an investment. That’s how we as a family see this, to invest in him and give him the best opportunities. It’s a huge investment in time, but that’s part of the reality. Is it worth it? Absolutely. Every parent wants to pave the best road ahead for their child. We’re willingly spending time and money and putting resources forward to make him so successful.”

For Christian Veilleux, it’s also been a learning experience in patience and handling attention, whether it’s from social media followers, recruiting analysts or college coaches who are in constant contact with him.

“I never thought it would get this huge,” Veilleux admitted.

Don Cornelius, whose family Veilleux lives with on Grand Island during the school year and whose son is an offensive lineman at Canisius, sees every day how Veilleux handles what is thrown at him.

“When I was a 16-year-old, if I had that kind of attention on me, it would go straight to my head,” said Cornelius, who played college football at Clarion (Pa.) University. “I’m not his father, but I call myself his football dad. The advice I always give him is, ‘Christian, you’re going to be reading great things, you’re going to hear from college coaches, you’re going to be interviewed, but you have to work hard and remain true to yourself.’

“One thing I stressed to him is that everyone in college was as good as you are in high school. There’s a huge jump in the level of play. I told him, ‘You have to be ready for it, and just keep working. You have to be prepared and not let things get you up or down.’ ” 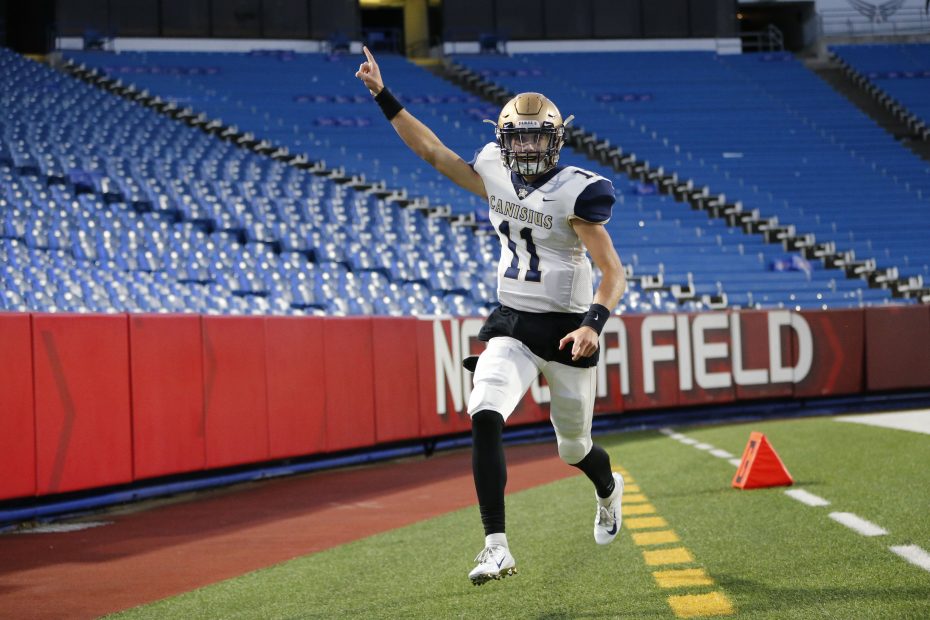 What’s on the horizon

The school year at Canisius ends May 31. Veilleux will spend just about every weekend in June on the road, whether it’s at a camp or at a college and meeting with coaches on unofficial campus visits, including trips to Tennessee, Kentucky, Purdue, Pittsburgh, West Virginia and Penn State.

He could reclassify in the next few weeks. He acknowledges that decision will have to come quickly, though.

“It would be a tough decision to transfer out, after this year, but it is a possibility,” Veilleux said. “Just like with staying here, then doing a postgrad year. There’s a lot that goes into it. I haven’t made any decisions yet. I’m not leaning towards anything set right now. I’m exploring all my options and trying to get to know all the information.

“When I’m comfortable and confident in a certain path and in a certain decision, that’s when I’ll make up my mind.”

Once he decides if he will reclassify for recruiting, that’s when he’ll make more decisions about college football. The latest he wants to decide is after Christmas of 2020 – if he chooses to reclassify.

Canisius coach Rich Robbins is realistic about Veilleux’s future, and the impact that Veilleux’s choices will make on his program.

“That’s the main thing that would drive Chris not to be with us, reclassification. If we could reclassify him, it would be a no-brainer to do that here. But if he wants to do two more years of high school, and he wants to be a 2021, he can do that. There’s a lot of different options on the table, each college he talks to is telling him something different that he should do. It’s tough.”

What’s astonished Robbins the most about Veilleux is his growing self-assurance – and not just when he’s throwing passes or evaluating routes. For someone whose future seemingly hinges upon the decisions he faces, Veilleux maintains a certain composure.

It’s evident when Veilleux discusses what will drive his choices: Don’t be enamored with one school, one coach or one football program. And don’t be duped by a process that can sometimes be seductive yet deceptive.

“With everybody trying to steer you in different directions, especially college coaches who want you to come to their program, they’ll let you know what you want to hear,” Veilleux said. “But sometimes you’ve just got to know what’s true and know what’s false.”

Robbins has given Veilleux some advice: Be selfish. Look out for yourself.

“Whatever you decide to do is fine with me, and I’m giving you my advice as if I was your father and not as the Canisius coach who wants to keep his star quarterback," Robbins said. "Only a family and their son can know what’s best for them.”