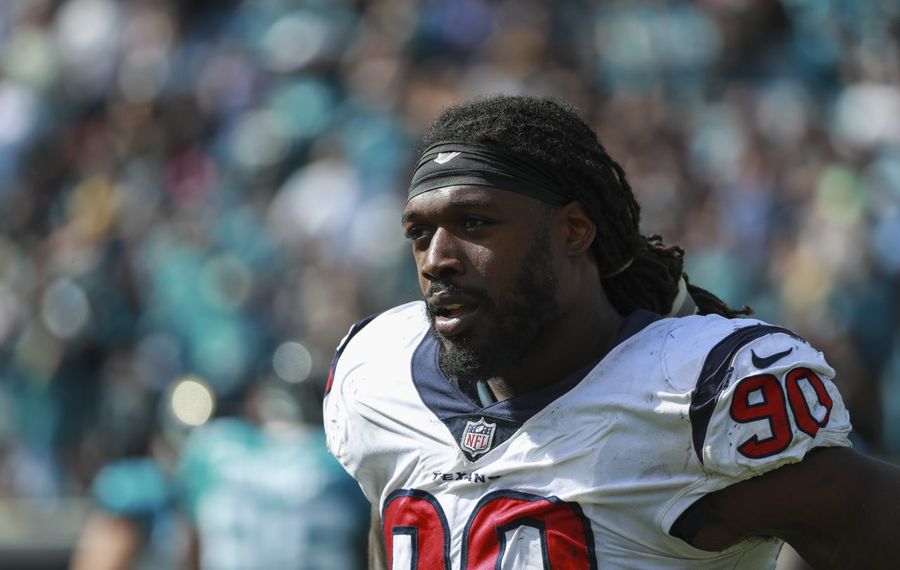 The Buffalo Bills' offseason has hit its first bit of adversity.

When Sean McDermott started his news conference before the team's second spring practice session, he read an injury report that sounded like it should have come in Week 7 of the regular season. The good news is it's May. There is time for those players to get healthy.

The bad news is, those injured players are missing out on valuable practice time as the Bills' coaching staff tries to incorporate several new players. On to this week's Mailbag ...

IDon’tTrustTheProcess asks: The potential addition of Jadeveon Clowney via trade to Buffalo is, according to some, gaining traction, but seems to be getting a mixed bag in terms of reviews by fans. Assuming it would not involve a No. 1 draft pick, what is your view on his addition to the defense?

Jay: I’m not sure the idea of the Bills adding Clowney is “gaining traction,” but it’s become a talking point, most recently in reference to The Athletics’s Aaron Reiss writing about the possibility of the Texans making such a move. Reiss mentioned the Bills, Ravens, Lions, Eagles and Buccaneers as possible trade partners. The Bills make sense to be included on that list for a couple of different reasons. No. 1, they have the cap space to afford such a deal. No. 2, even after signing Jerry Hughes to a two-year contract extension, there is a long-term need at defensive end. Opposite Hughes, Shaq Lawson is entering the final year of his contract, and Trent Murphy has a deal that would cost the Bills only $1.75 million in dead money against their 2020 salary cap to get out of after this year if they so choose.

For those reasons, along with General Manager Brandon Beane’s willingness to make such a bold move, a trade for Clowney has to be considered a possibility. However, I think it’s unlikely. As Beane has mentioned, stud pass rushers rarely become available – and when they do, they carry a premium price. The Seahawks recently traded their designated franchise player, Frank Clark, to the Chiefs for first- and second-round draft picks. Earlier this offseason, the Chiefs traded Dee Ford to the 49ers after using the franchise tag on him, receiving a second-round draft pick in return. Clowney’s value in a trade figures to be somewhere in between that. The former No. 1 overall draft pick has yet to have a 10-sack season in five years. It’s fair to wonder if Beane would be willing to give up a first-round draft pick for a player with that track record.

Gerry Volpe asks: So, the "bell cow" has a broken foot! History shows that's not something that heals overnight. Where to now?

Jay: Can the “bell cow” label be put on a tight end? I always thought it was reserved for running backs. Either way, it’s true that the Bills were counting on Tyler Kroft playing a big role in the offense. Of all the injuries announced, Kroft’s is easily the most troublesome, particularly because his broken foot is the same injury he dealt with last season, when he managed to play just five games. NFL Network projected a three- to four-month recovery, which would take Kroft right to the start of the regular season. That will mean going through all of spring practices, training camp and the preseason without practicing. That feels unlikely. My guess today is that Kroft could start the season on the physically-unable-to-perform list, which would mean missing the first six games of the season.

As for the “what now,” the biggest beneficiary from here looks to be Jason Croom. After adding Kroft and Lee Smith in free agency, as well as Dawson Knox and Tommy Sweeney with draft picks, Croom found himself largely on the roster bubble. If Kroft does start on the PUP list, it could open a spot for Croom.

James W. Porter Jr. asks: Did Dawson Knox sign his rookie contract with the Bills yet?

Jay: He has not, but it’s not anything to worry about. Any rookie holdouts are usually over contract language, not money, and are resolved before the start of training camp. I fully expect that to be the case with Knox.

Rick McGuire asks: We're waiting patiently for Tom Brady to retire, but is it realistic to think that once he's gone, the Patriots will suddenly return to "human" stature? As Bills fans, shouldn't we expect Bill Belichick to somehow find the next Brady? Or will this be like Cleveland when LeBron left?

Jay: The two extremes are the continuation of the Patriots’ dynasty, or a Cavs-like collapse. I know it’s not the sexiest answer, but I’d expect New England to land somewhere in the middle. Without a quarterback of the future, it’s difficult to imagine the Patriots being able to sustain the excellence of the last two decades, but Belichick isn’t going to let them bottom out, either. The better question might be, does Brady retire first, or does Belichick decide to go with him? Given how close Brady is with Patriots owner Bob Kraft, he can probably play as long as he wants. If age – Brady turns 42 in August – finally starts to catch up with him, what does Belichick decide to do? He has always moved on from a player a year too early as opposed to a year too late.

BigD asks: How much does Mitch Morse’s injury affect the gelling of the offensive line so that the team gets out of the gate well when the season starts?

Jay: To use McDermott’s words, it’s “not ideal.” With the possibility of five new starters along the offensive line, position coach Bobby Johnson has his work cut out for him. We know that Morse was signed to be the anchor in the middle of that line. Assuming he’s ready to go at the start of training camp, which seems like a safe bet, his injury doesn’t figure to be a major concern for the Bills. There is no question, though, that it would be nice to have him participating this spring.

Tim Hourihan asks: Will the new safety, Jaquan Johnson, push to start? Can you see Knox being a big playmaker in Year 1?

Jay: Short of an injury, no way on Johnson. The Bills have one of the best starting safety tandems in the NFL with Micah Hyde and Jordan Poyer. Johnson isn’t even a lock for the 53-man roster. The Bills still have veterans Rafael Bush, Dean Marlowe and Siran Neal – a 2018 fifth-round pick – on the roster, and they’ll be fighting for a job along with Johnson at training camp.

Behrnsie. asks: Do the Bills do annual testing of tryout/roster players along the lines of how they are tested at the combine? Are those results ever available, if so?

Jay: The Bills host tryouts on Tuesdays during the regular season. The amount of players who participate varies on a weekly basis. The team can ask a tryout player to do a specific workout if it chooses. Those results, however, are not published. The most you’ll get is reports of a player looking good in tryouts, most likely the result of an agent trying to find a job for his client.

Mark Martin asks: May is a great time for guessing. In your opinion what are the chances of: 1. Duke Williams earning a roster spot? 2. Duke Williams transitioning (over time) from CFL star to NFL Pro Bowler, ala Cameron Wake? 3. Another 6-3 result in this year's Lake Erie Bowl on Nov. 10?

Jay: I’ll put No. 1 at 50-50. The receiver depth chart looks relatively set at the top with Zay Jones, Robert Foster, John Brown and Cole Beasley. I also expect Andre Roberts to have a roster spot based on his special-teams play as a returner. That leaves one or possibly two spots remaining on the 53-man roster, with eight players going after them. It’s also possible the Bills go with just the above five receivers, letting them keep an extra running back or tight end. The odds of the second question are much less. I’d give Williams a 10 percent chance of developing into an annual Pro Bowler – and that might be being generous. The last receiver I could find who went from the CFL to that type of success in the NFL is Joe Horn, who spent one season up north in 1995 before being drafted the following year by the Kansas City Chiefs. As for the last question, I give that a 2 percent chance of that happening – as long as there’s not a blizzard.

Brendan Sweet asks: What is the likelihood of the Bills pursuing Vikings tight end Kyle Rudolph? And what would it take to get him? I love the idea!

Jay: The issue with Rudolph and the Vikings is his salary cap number. It’s scheduled to be $7.625 million in 2019, which is too much for a team with just $1.26 million in cap space. Rudolph has said he’s “too young” to take a pay cut at age 29. Unless the two sides can work out a contract extension that lowers Rudolph’s 2019 cap hit, there is a possibility he’s moved. It’s hard to say what the price would be. ESPN reported that the idea of a third-round pick has been floated. Given Kroft’s injury, a case could be made the Bills would possibly be interested. In my mind, a lot of that depends on what they think is going to happen with Kroft. If he can get back early in the 2019 season, acquiring Rudolph would be unlikely. If the Bills think Kroft is going to miss a significant chunk of the season, though, maybe they make a move.

Thanks for all the questions this week!