The broadcasting careers of Steve Tasker and Mark Kelso, two members of the Buffalo Bills Super Bowl teams of the 1990s, changed dramatically with announcements made Tuesday.

The moves have readers asking several questions that I will try to answer.

Was it Kelso’s choice to leave or is that just spin?

The Bills announcement stated that Kelso “decided to step away from broadcasting after 13 years to focus more on his role with NASCAR racing team JTG Daugherty Racing. Pegula Sports & Entertainment and the Buffalo Bills sincerely thank Kelso for his contributions and service.”

I’m skeptical of the stated reason for the switch to Wood. The convenient explanation came in a release, not from Kelso’s mouth.

I haven’t been able to reach Kelso via phone or email to learn if it was his call, if the Bills decided to replace him or if it was a mutual decision.

In a February interview with Buffalo News sportswriter Vic Carucci about Kelso's racing team, he was asked how he juggles it with his broadcasting work.

“There's not a lot of free time in the fall, I’ll say that,” said Kelso. “But it's a lot easier now with the film work on your iPad, so you can carry it with you to wherever you go. I spend a lot of time studying. There's no sense to do anything unless you're going to be, as they say in racing, full-throttle.”

He didn’t mention he was considering leaving the analyst job in the story.

Granted, his racing team duties made Kelso a very busy man and the end of his run as the analyst will lighten his workload. But the line about him stepping away to focus more on his racing team strikes me as a win-win-win for Kelso, Wood and the Bills.

Kelso gets to say it was his call and the Bills and Wood don’t take a public-relations hit from fans of Kelso’s analysis for replacing him.

The idea his racing team commitments led him to move on from a coveted job reminds me of a line frequently made after people leave their jobs that they plan to spend more time with their families. That's another reason why I think it was primarily the Bills' call.

If the decision was entirely Kelso’s, I also would have expected he would have been around Tuesday to explain it and say goodbye, and then happily pass the color analyst torch to Wood.

Was Tasker – who is the co-host of “One Bills Live” alongside Murphy on WGR and MSG – the Bills first choice to replace Kelso?

No. Tasker responded to a text by writing that he wasn’t offered the analyst job. It probably would have been awkward anyway for him to replace a friend and former teammate if it wasn’t Kelso’s decision to leave.

Why did the Bills pick Wood to replace Kelso rather than Tasker now that the former special teams ace is no longer going to work for CBS Sports this fall and would have been free to be the radio analyst?

My guess is the Bills decided to switch to a younger, more recently retired analyst who is more in tune with current players and younger fans.

Why did Tasker’s run end at CBS?

At least he didn’t say he wanted to sell more cars and was concentrating on being an advertising spokesperson. He owned up to CBS’ decision to let him go. He was right in saying his time “had just come to an end … Twenty-one years was a good run.”

It was especially a good run for a special teams player – arguably the greatest ever and worthy of Hall of Fame consideration. 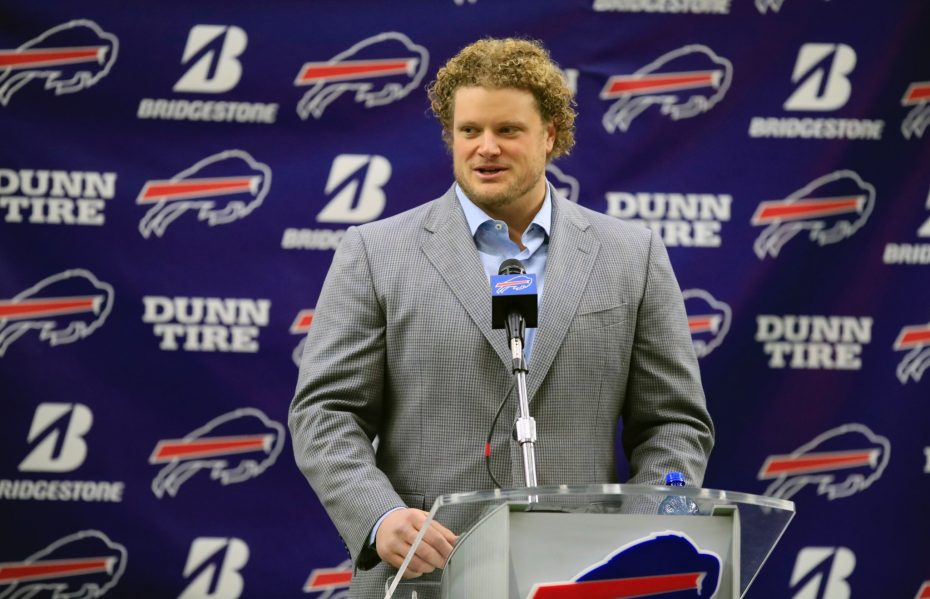 What do you think of the trade of Wood for Kelso?

I think it could turn out to be a good trade, though it will take time for Wood to grow in the role. Being a color analyst isn’t as easy as Romo has made it look the last few seasons.

My Dec. 31, 2018, review of what turned out to be Kelso’s last game – the Bills’ season-ending 42-17 victory over Miami – pretty much describes how I felt about Kelso. (If he isn’t out of the country, it also might be why he hasn’t returned my calls or email. If so, I understand.)

Here is part of the review:

“Kelso actually drives me crazy with his nonstop talking in between plays about the previous play. The former Buffalo Bill obviously knows the game, coverages and schemes, but he apparently thinks he gets paid by the word.

“I’m only slightly exaggerating in guessing that Kelso said more words during Sunday’s game than all the analysts who worked the previous 15 games combined.

“By the second half, my head hurt so much that I tried to tune out Kelso’s very technical analysis as much as possible.

“Kelso would be a much better analyst if he looked up the word 'succinct,' followed the definition and got less technical. Kelso should learn to get in and out of his analysis in a few seconds like Murphy did when he was the analyst alongside play-by-play man Van Miller.

“In short, Murphy needs an analyst who is more like he used to be.”

We’ll find out if that analyst is Wood in about four or five months.