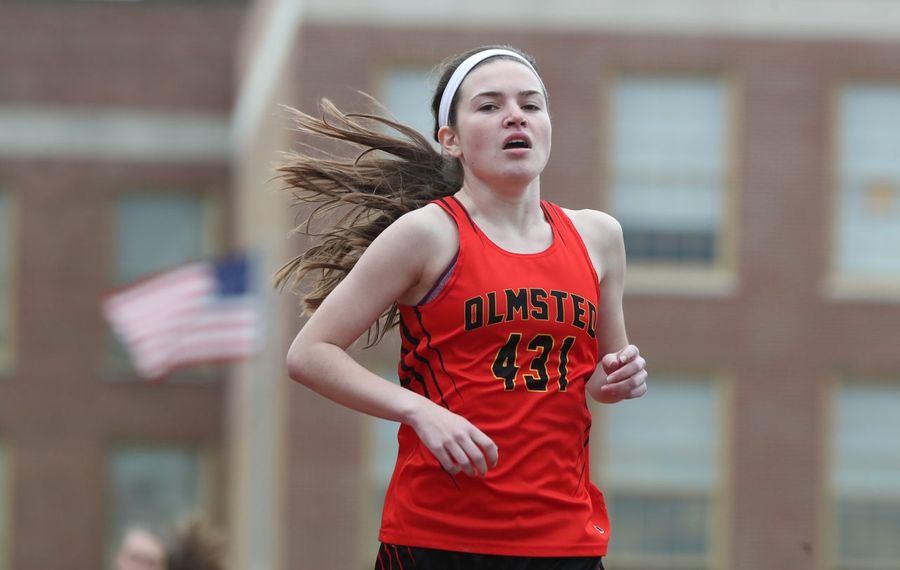 Brianna Grine just wanted to walk away with peace of mind. To know that, regardless of how she finished, she did her best.

Grine was able to walk away with that sense of contentment.

She also took home three ribbons at the All-High Track and Field Championships that were held at Robert E. Rich Stadium on Wednesday.

"I really just wanted to go out happy with my performance," Grine said.

Grine, who is considered by many to be the best distance runner in the city, scored a first place finish in the 3,000-meter on day one.

On day two, Grine, a senior at Frederick Law Olmsted School, won the 1,500-meter with a personal best time of 5:33.8. She was also part of the Owls’ 4x800 relay team that also came in first.

Olmsted coach Mark Orlando said that Grine is a coach’s dream and the poster child for the motto of "never say die." Even if she doesn’t reach her goal, Grine’s perseverance is a great example for all of her teammates.

"That’s kind of what track is. There’s always gonna be someone maybe faster, somewhere but it’s going against yourself," Orlando said. "Leaving it all out there. Doing the little things when nobody is watching. The stretching at home and that epitomizes what she did and has done and what her career here has been."

Introduced to the sport by her mom, Brianna feels she has the best of both worlds. She can learn from her mom without the pressure of balancing the coach/parent/kid dynamic.

"Well, she doesn’t coach my team so it’s OK," Brianna said with a smile. "But with her as a coach I’ve grown up in this track coming here since I was a baby. So it helps to be used to everything before I even began running (for Olmsted). She yells at me when I’m running and I definitely always have that in my ear to push faster. But she generally lets me so my own thing."

Olmsted’s girls as a whole showed their dominance as they took home eight first place finishes.

Grine’s teammate Miquela Hunter won the 100-meter, 200-meter, 400-meter and was also part of the 4x400 relay team that stood atop the podium.

Hunter, a senior, has qualified for states every year since seventh grade.

Nya Lockett of McKinley wowed the crowd as she took the 100 hurdles in 17 seconds.

Brooklyn Fitzgerald stood out for Performing Arts as she won the high jump.

As far as the Hutch-Tech boys are concerned, the All-High championship is their yard until someone proves otherwise.

The Engineers took home seven first place ribbons with Sembel Koshi leading the way as he crushed the competition in the 1-mile and 2-mile.

Head coach Dave Sardo said from the youngest rookie to the most seasoned veteran they all know and uphold the program’s legacy of greatness.

"There is an expectation but it’s not just for me, it’s for them," Sardo said. "They push each other and from that senior to that freshman they know there’s a lineage to live up to and it’s fun to watch."

McKinley’s Zywan Young won the shot put with a throw of 43 feet 3 inches. Milton Tarpen brought home a win for Olmsted in the triple jump.

McKinley appeared to have won the 4x400 relay, but they were disqualified for running outside their lane. Bennett ended up winning.

The news wasn’t all bad for the Macks as Patrick Mootry won the 400-meter.

The highlight meet of the day was the boys 100-meter dash that saw Hutch-Tech’s Alhagie Sesay win in a photo finish with a time of 11.4 seconds. He narrowly edged Dylan Williams of East High School and Ngenda Elias of McKinley, who had times of 11.5 and 11.8 respectively.

"I was just thinking push to the finish and get my chest across before (Williams) could," said Sesay, who was also the anchor of the Engineers’ first place 4x400 relay.

The All-High championship meet does not crown overall team champions.