There is a funny truth that comes with playing cornerback in the NFL: The best players at the position don't always put up the best numbers.

Tre'Davious White's 2018 season for the Buffalo Bills is a good demonstration. He finished his 2017 rookie year with 18 passes defensed (tied for sixth most in the NFL) and four interceptions. Last season, those numbers dropped to eight passes defensed and a pair of picks.

On the surface, that looks like a step back. A closer examination, though, shows why it happened. As a rookie, White was targeted 81 times, according to analytics website Pro Football Focus. That number dropped to 52 times in 2018. White's coverage snaps per reception was 17.5, according to PFF, which ranked fifth in the NFL among 80 players who were in on at least 350 coverage snaps. Simply put, quarterbacks just didn't throw White's way as much last season.

White sat down with The Buffalo News this week to discuss what he learned from his 2018 season, and what he expects for himself and the team in the coming season:

The Buffalo News: You mentioned that you've gone back and watched every snap from last season two or three times. When you did that, what did you find?

Tre'Davious White: When I was shadowing guys, I sort of lost focus of the whole defense and just got into one-on-one battles. That's never good, because you leave your teammates out to dry sometimes. It's a selfish way to play, because you're going out there and you just want to dominate this one guy when overall there's a defensive scheme that you have to follow. Some plays, I would get into a battle with a guy and just try to take him out, and I'd forget about there's a whole team concept. Going into this year, whenever I'm trailing guys, I won't let that happen.

BN: So you got so wrapped up in saying 'I've got to stop this guy' that you lost sense of the bigger picture of what you were trying to accomplish overall?

TW: "Not what we were trying to accomplish, but trying to prove a point, if you will. That was here or there, but I feel like me growing as a player, growing as a teammate, I won't let those one-on-one battles overshadow the whole picture."

BN: So there's something inside you that makes you feel like you had to prove something? 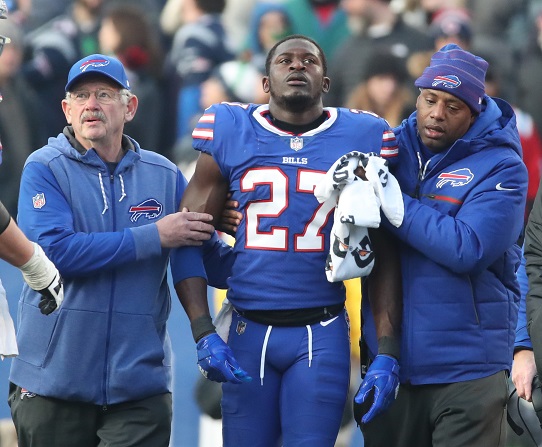 Tre'Davious White (27) leaves the field with help from trainers after New England Patriots tight end Rob Gronkowski (87) hit him late after he intercepted the ball in the fourth quarter at New Era Field in Orchard Park on Dec. 3, 2017. (James P. McCoy / Buffalo News)

BN: You had a concussion at the end of the 2018 season. How are you doing now?

TW: "Oh, I'm good. I was good right after. Actually, I felt better than I felt before the hit. So it was good. I was able to go out with my family after the game and have a nice dinner. So I'm good."

BN: What was the jump from your rookie year to your second year like?

TW: "My overall knowledge of the defense, my overall knowledge of the game and my overall feel for the NFL play style and play speed – ultimately everything slowed down so much more for me. I was able to go into the game with no nerves. I was able to go in and relax because I knew what to expect, just from watching film. My film-study habits got better. As far as how I go about the week and how I prepare for a game, everything else slowed down. That's definitely something that I learned from year one to year two."

BN: Is there a similar jump that can be made in year three?

TW: "Most definitely. You can always find stuff to improve on. That's the next step for me. Just playing within the scheme of the defense all the time and being that total package."

BN: Your numbers on the surface maybe weren't as prolific as they were when you were a rookie, but it's hard to put up numbers when you're not getting thrown at. As the season went on, did you feel like you were getting tested less and less?

TW: "For sure. I started out so hot, so they started to shy away from me a little bit. Then toward the back end, I had a couple rough stretches where I let a few plays get away from me, but that's not going to overshadow my whole body of work. Going back to watching film from my rookie year to my second year, I moved better, I was in spots better. I covered better. I did everything better, it's just that the numbers weren't there. There is some stuff you can't control – the amount of balls thrown your way. You can always control what you put out there on film. People that know football, they know 'This is a good player.' "

BN: We talked last year at training camp with the whole secondary. You threw out the 20 interceptions. You didn't get that, but finished with the No. 1 pass defense in the NFL. A couple weeks ago, there was a poll from Fox Sports asking which team has the league's best secondary. The Bills weren't one of the four choices. Are you used to that by now?

TW: "That's something that comes with it, man. I feel like once we start to win games and get people's attention, those accolades will come. That's something we can't control, if people aren't paying attention to the No. 1 pass defense. We can just go out and control the product that we put out there. I feel like this year, we'll continue to do it again."

BN: You've got a good slate of receivers on the schedule again this year. Are you particularly looking forward to going against your college buddy, Odell Beckham Jr.?

TW: "It's going to be fun. We've got LSU guys all over the place in this league, so any time we get to play against each other, it's always love. We're going to push each other to the limits that we know we can go. There are a lot of guys on that schedule that I look forward to. I've got to be ready and try and put the work in now, so when those times come, I'll be prepared."

BN: We talked last year about that challenge of being an island against another team's No. 1 receiver. You got a taste of it last year.

TW: "Any corner you talk to, they want those matchups. That's what brings the best out of you. It would be crazy for me to sit up here and say, 'No, I just want to sit back and play.' No, I want to compete. That's ultimately what it's all about. You're trying to win your one-on-one matchup, it gives the team the upper hand and a better chance to win."

BN: You've never been shy about your ultimate individual goal — the Pro Football Hall of Fame.

TW: "You play this game, you don't do it just to say I'm in the NFL. You want to be one of the best at it. If you have that type of mindset, you'll be motivated each and every day to work hard and do the best you can to help the team out."

BN: Your motivation, those perceived slights, you use those, don't you? Some guys talk about how they ignore it, but is that something that has always motivated you?

BN: Entering year three of the same defensive system is a luxury a lot of players in the NFL don't always experience. Can that make a big difference?

TW: "Any time you can be around the same people, you become familiar with what to expect. You're familiar with the playbook. With me going into my third year in the same scheme, it can always get better. You can find new ways to play certain coverages. Whenever you change stuff each and every year, it's never going to be successful. You don't have a set foundation, so everybody is going to be all over the place."

BN: The only spot on the defense that didn't have that last year was the position opposite of you. There were four guys – Phillip Gaines, Vontae Davis, Ryan Lewis and Levi Wallace – who started opposite of you. What impact did that have on your game?

TW: "It really didn't have one. Vontae, it was a different scheme for him. He was always a man-to-man corner and press. That's really not the scheme of our defense. We don't go in every play and play man. We mix it up. So it was kind of difficult for him to transition into that. And then with Phillip coming in, he did a great job of buying in, too. He had to learn two different positions -- nickel and corner. That's difficult. We did the best we could with what we had."

BN: What was it like going through the Vontae situation? It seemed like you guys grew close in the short time you had with him, so how was his decision to retire met as a teammate and friend?

TW: "That was weird. Just knowing him personally, it's hard. You can't mix the two. I know him on a personal level, and we still text to this day. He's one of those guys you always root for, because of his story. The conversations we've had, I understood where he was coming from when he made that move. A lot of people wouldn't because they don't know everything that goes into it, so they just think he quit on the team, but ultimately it was just a lot of things that he had going on. He had to step away from the game because he felt like his life and his future and his well-being was overall bigger than the game of football, which is true. You as a person, your mental health is way more important than playing a game."

BN: Last question: How are things at the goalie academy?

TW: "People have been giving me a hard time, man. Because the Sabres, they weren't doing real good after our season was over – once I left and stopped training those guys. We're going to have to get it back going. After the season, I'll probably have to stick around."