The stories of 16 refugees and eight descendants of immigrants, spanning 13 countries and several generations, line the gallery walls. They tell the story of those who have built or are in the process of establishing new lives in Buffalo after they, or in some cases their parents or grandparents, came to the United States in search of safety and the pursuit of a better life. Some were more welcome than others.

"Finding Refuge in Buffalo" is the new exhibition that features essays by Jody K. Biehl, an associate professor at the University at Buffalo who directs the journalism program, and portraits by photojournalist Brendan Bannon. The exhibition is at WNED Studios through June 2, and is presented in conjunction with the station's two-year "Making Buffalo Home" project.

"Each story is individual, but taken together I think they speak to the larger story of American immigration across time, and the changing policies and politics of resettlement," Biehl said.

"But its main focus is on rescue and resilience, on courage and compassion, on new beginnings," she said.

The exhibit arrives at a time when refugees and immigrants are facing increased hurdles and are subject to scapegoating around the world, including in the United States.

Many of the stories are a testimony to overcoming terrifying danger and excruciating heartache. 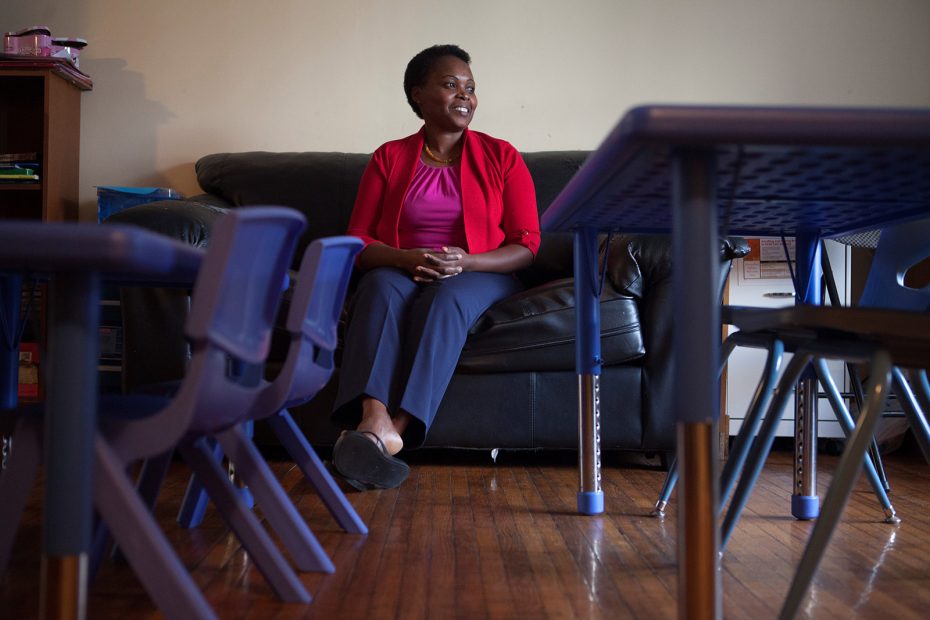 Solange Niyigena recently reconnected with a sister she was separated from in 1996. (Photo courtesy Brendan Bannon)

The world is awash with refugees. There are some 68 million displaced people, with over 25 million considered refugees, the most displacement since the end of World War II. 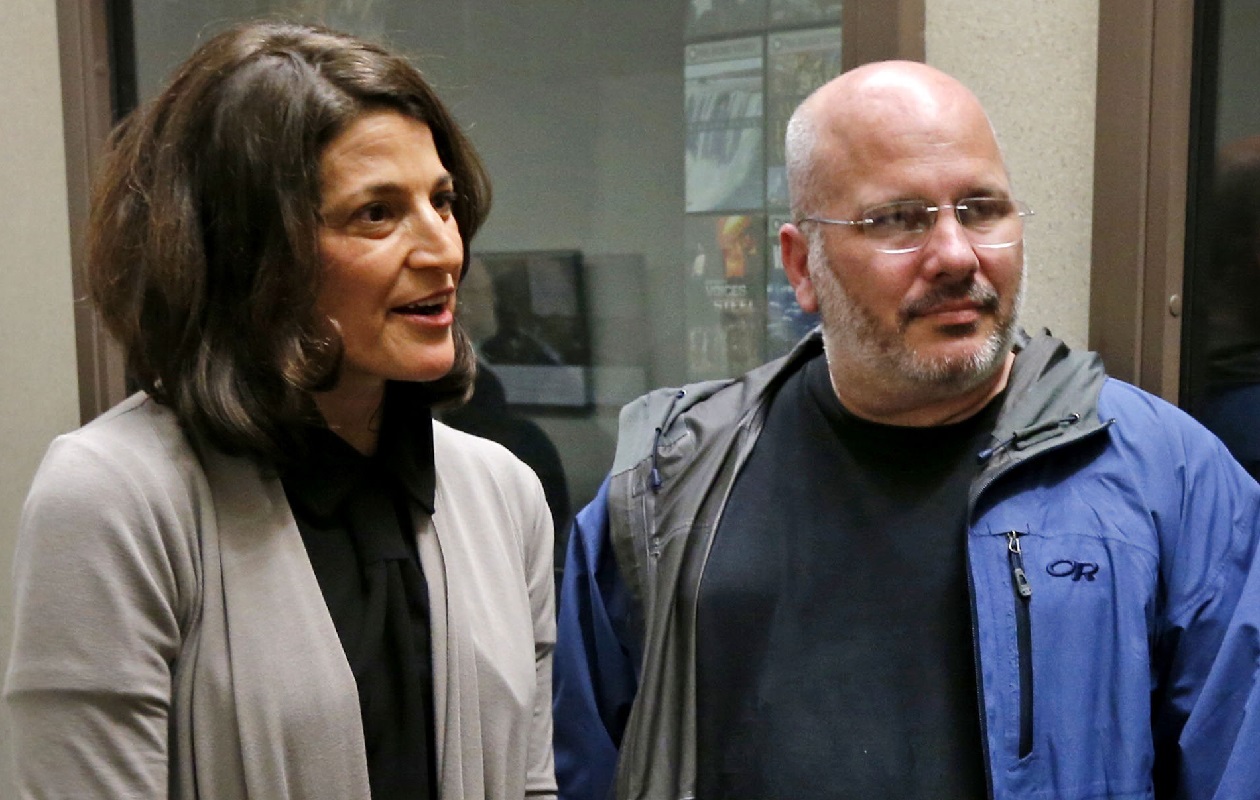 "The people who came here are among the lucky ones," Biehl said. "Worldwide, fewer than 1 percent of refugees get resettled annually."

Immigration is nothing new in Buffalo – it has helped build the city from its earliest years when the Dutch arrived to help lay out the city, to the first large wave of immigrants that began in the 1850s. By 1910, 75 percent of Buffalo's population was foreign-born.

Buffalo's growth in recent years is largely due to the arrival of over 15,000 refugees since 2002. Thanks to them, Mayor Byron Brown expects the 2020 census to show the city's first population growth since 1950.

"The exhibit is very powerful," Brown said. "Immigrants and refugees certainly are a source of growth and strength and vitality in our community."

The people portrayed came to Buffalo with roots in Italy, Poland, Germany, Ireland and Puerto Rico, while others arrived more recently from Afghanistan, Bhutan, Burma, the Democratic Republic of Congo, Ethiopia, Iraq, Rwanda and Somalia.

Rubens Mukunzi, who came from Rwanda in 2013, stood near his photograph at the opening, proud to be included.

"When I got here, my life was very difficult. I thought maybe I couldn't make it in Buffalo. Everything was challenging. First of all, I couldn't speak English," said Mukunzi, who speaks French and three African languages.

Mukunzi, who publishes and edits Karibu News, a free newspaper for immigrants written in English, Swahili, French and Burmese, said much has changed since.

"I feel like I am part of the community," Mukunzi said. "When I left my country, I couldn't believe I would be feeling this. I wanted to be involved."

But Mukunzi finds acceptance difficult at times. In the exhibit catalog, he told Biehl about an incident in which a woman, upon hearing his accent, told him to "go back" to his country.

"We work hard to survive," Mukunzi said. "I work for this country. I pay taxes. What happened to me, it could happen to you, too. What if it happened to you?" 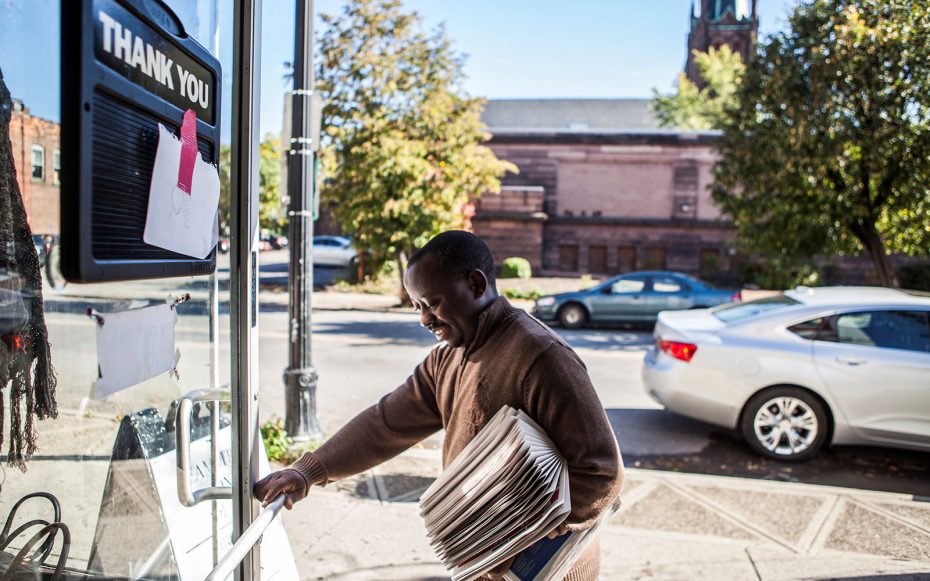 Nor do ethnic divisions that existed in the refugees' homelands necessarily go away in their adopted home.

The hierarchy in Somalia that puts Somali Cuishitics above Somali Bantus such as Shebule and Mahamud Mberwa, whose story is also told, continues in Buffalo. The mistreatment, including unprovoked violence, stems from the Bantus being descendants of East Africans who were forced to go to Somalia as slaves. 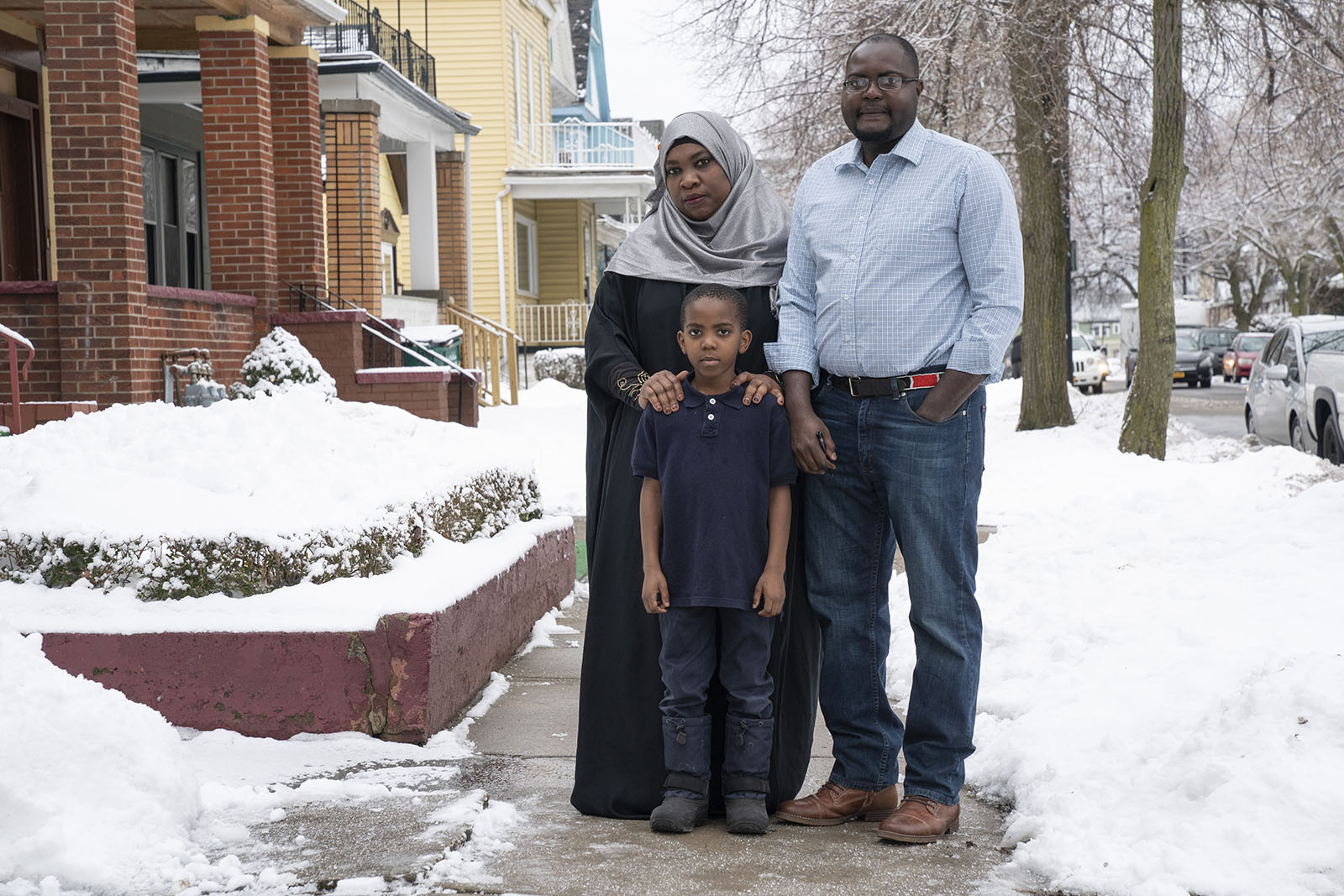 Refugees who came to the U.S. after World War II and their descendants are also prominently featured.

Irena Woszczak's grandparents and their five young children, including Woszczak's mother, were forced by Soviet soldiers in 1940 to leave their home in eastern Poland for slave camp, known as "Gulags," in Siberia.

They were in some ways the lucky ones: Only one-third of the 1.7 million Polish citizens deported by Josef Stalin from 1939 to 1941 survived.

"The opportunity to tell my family story that had been forced to keep quiet for so long, and to remember them and share everything they have gone through is quite an honor," said Woszczak, an optician at the Broadway Market. "I love Buffalo, and you just feel like you're really at home when you get chosen for something like this." 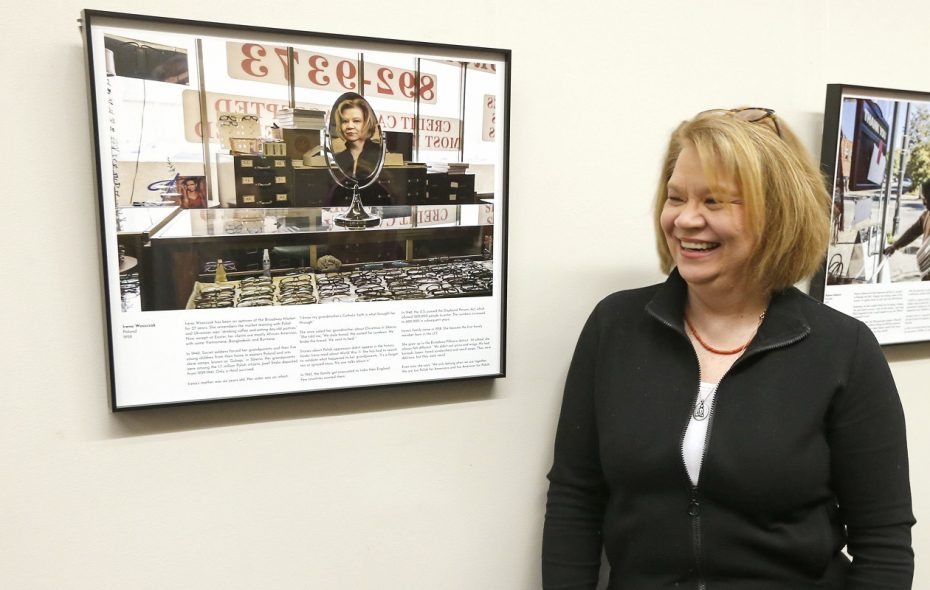 Joe Giambra recounts the discrimination against Italians when he was growing up in Buffalo. Ruth Lansing, who turned 100 in 2018, recalls the horror of Kristallnacht and of the Holocaust, which claimed her parents and a sister at Auschwitz. Lansing went on to marry, raise a family and become a school teacher in Buffalo.

Bannon said the different generations are a reminder of the role of immigrants in making the country what it is today.

"It's all of our stories at some point, if you can see it or not," Bannon said. "To lose track of that is a luxury because of the successes that have afforded some people to forget over generations."

Getting recent refugees to share their stories was a lot to ask of them, Biehl said.

Many are separated from loved ones or haunted by witnessing the brutal deaths of loved ones, Biehl said. They are haunted by the violence and bloodshed, shamed by the indignity of statelessness and worried about repercussions for family members still seeking passage to the U.S.

It was out of that concern that Bannon photographed Safari Solomon, who waits hopefully for his wife and 6-year-old daughter to join him, shrouded in darkness in order to protect his identity.

Some refugees, after undergoing hours of questioning from immigration officials, were skeptical about telling their stories.

"For them, telling their stories is frightening, not empowering," Biehl said.

There are now becoming fewer stories to tell, as immigration numbers plummet under President Trump.

Bannon, whose aerial photographs of the former Dedaab refugee camp in Kenya, the largest in the world, was featured in an exhibition on displacement at the Museum of Modern Art. He said people in flight have so much potential that's waiting to be harnessed.

"What you see are hundreds of thousands of people who have dreams and goals and ambitions like anyone else," Bannon said.

"There is this infinite human potential. What I think of someone like Saladi Shebule," Bannon said, while standing in front of Shebule's portrait, "it shows that with the opportunity to explore that potential comes the opportunity to make a contribution. He is doing that by building himself up and making a better Buffalo for everybody." 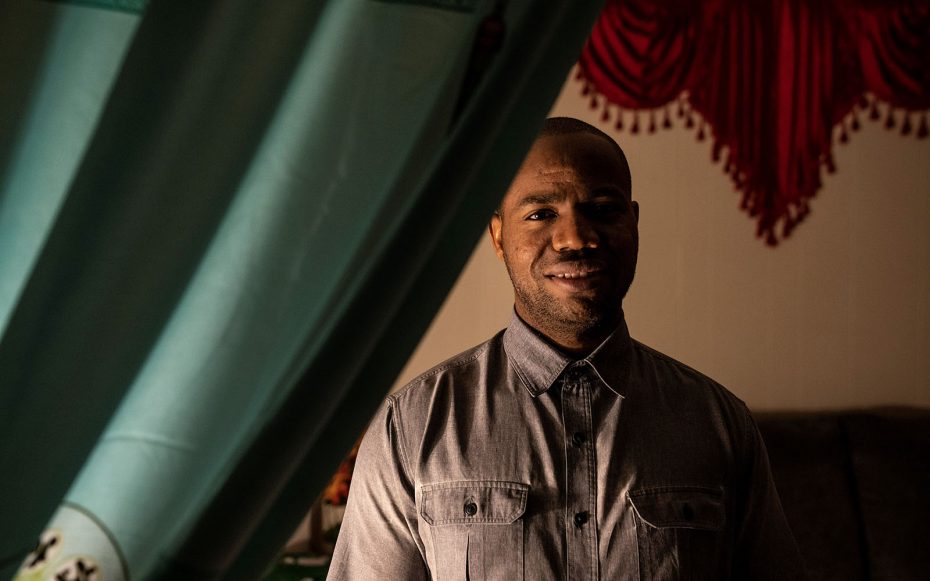 Saladi Shebule, who was illiterate when he arrived in the United States at age 16, has graduated from Daemen College and is now pursuing a master's degree in public administration. (Photo courtesy Brendan Bannon)