That’s the mantra of every successful business. It also holds true for anglers on the Great Lakes, especially when it comes to finding that big derby-winning fish.

For Robert Mueller of Hamburg, he was in the right place at the right time for the Spring Lake Ontario Counties Trout and Salmon Derby that was May 10-19.

Fishing out of Point Breeze in Orleans County with Joe Netti of Cortland on May 11, they fished out deep for the big salmon with limited success on this opening weekend. As the day wore on, Netti suggested that they move into shallower waters and try for brown trout, another category in the contest. They put on a black and purple Long A Bomber stickbait behind a planer board and began to work a distinct mudline.

Whack! Instead of a brown trout, a 17-pound salmon grabbed hold of the bait. The same scenario repeated itself several times until they were about to call it a day.

As they started to troll into port, the rod had another release and this time a 25-pound, 14-ounce king salmon ended up in the back of Netti’s “Musky Joe” Lund boat 20 minutes later. The fish held up the remainder of the derby to collect the $15,500 prize.

“It’s the biggest salmon that I’ve ever caught,” Mueller said. “It came at the perfect time.”

Netti is no stranger to the winner’s circle. He claimed the grand prize catch in 2000. However, he should have taken $10 and joined the Lake Ontario Trout and Salmon Association. Mueller was already a member. Had Musky Joe joined prior to the contest, they would have earned an extra $1,000. 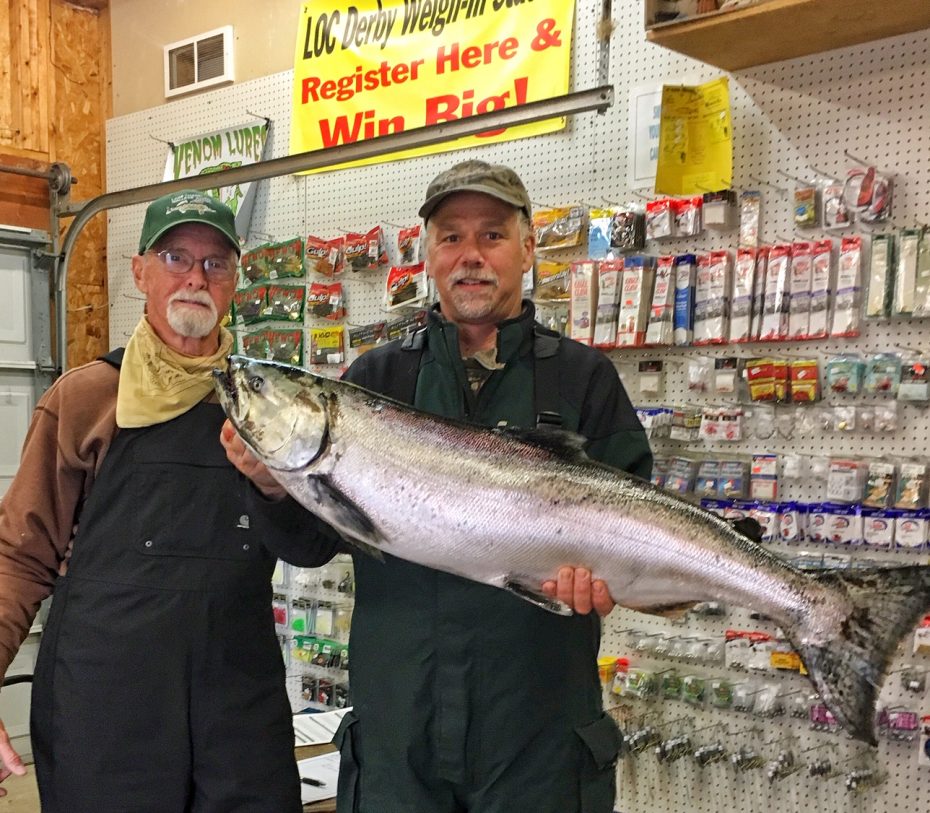 Brian Marketich of Beaver Falls, Pa., holds up his first-place salmon, a 22-pound, 13-ounce king caught just west of the Niagara Bar. His fishing partner Ken Champagne of Chillicothe, Ohio, is also in the photo. (Photo courtesy of Creek Road Bait and Tackle)

In the salmon division, first place was reeled in by Brian Marketich of Beaver Falls, Pa., with a 22-pound, 13-ounce Niagara Bar king, good for $2,500. Fishing with Ken Champagne of Chillicothe, Ohio, they targeted warmer waters just west of the Niagara Bar aboard their 19-foot Sylvan named “Outfitter.” Trolling a “Mass Confusion” Moonshine spoon in 53 feet of water behind a dipsy diver back 140 feet on a No. 3 setting, the salmon hit and came to the boat relatively easy … until it figured out what was happening. Five runs later, the king hit the net. It also was the largest salmon caught by a LOTSA member, good for another $1,000.

June 3-5 – $1K a Day event for the biggest salmon on Lake Ontario caught each day through June 5. Register for $125 at www.wilsonharborinvitational.com for details. Free for anyone registered in the WHI tournament.June 4 – Open registration for t…

The final bit of luck for these longtime derby competitors was that a larger fish was caught midweek (23 pounds, 4 ounces), but that person failed to hold on to the fish until the awards ceremony. The top two fish from each division must be retained for photo purposes. Unfortunately, the fish was filleted at the cleaning station, a tough lesson to learn.

First place lake trout was a 23-pound, 4-ounce Niagara Bar fish reeled in by Jerry Unites of Pittsburgh, Pa., and he earned a check for $1,200. He was fishing with Alex Coury of Pittsburgh, Todd Pavlik of Saegertown, Pa,. and his son Trevor aboard Todd’s 28-foot Pursuit “Pacific Time” out of Wilson.

“We were trolling near the red can on the Niagara Bar with a magnum dipsy 141 feet back on a No. 1 setting,” Unites said at the awards ceremony Sunday at Bald Eagle Marina in Kendall. “We were over 150 to 170 feet of water, using a white Spin Doctor with green dots and an A-Tom-Mik hammer fly when the big fish hit. We had him to the boat in 10 minutes.”

They, too, were fortunate. Another derby competitor reeled in a 24-pound, 12-ounce laker out of Wilson but failed to hold onto the potential winner until the end of the contest. A total of 16 winning lake trout came out of Niagara County ports. 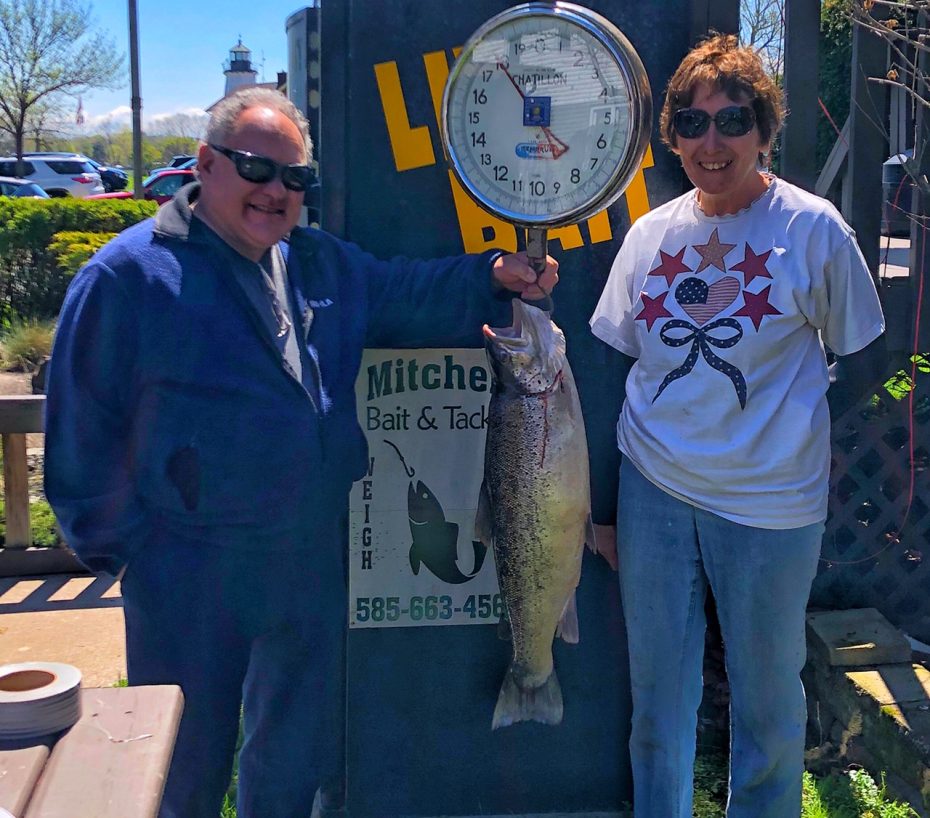 Chuck Mazzola of Hamlin with his winning brown trout, a 17-pound, 6-ounce fish he reeled in off Sandy Creek while fishing with Kathy Soper of Hamlin. (Photo courtesy of Chuck Mazzola)

The first-place brown trout this spring was a 17-pound, 6-ounce fish caught by Chuck Mazzola of Hamlin fishing out of Rochester. It was Mazzola's first derby and his first year with a boat. The catch was good for $1,200.

Fishing with Kathy Soper of Hamlin, the two went out in Mazzola’s new 19-foot Tracker Targa off Sandy Creek in 10 feet of water. “I put out a black and white Long A Bomber behind a planer board about 50 feet back first thing in the morning on opening weekend,” Mazzola said. “At 7:15 a.m. the fish hit and when we netted it at the boat, it shocked the heck out of me. I never expected a fish so big to come from water that was so shallow.” Sounds like location was key, again.

The walleye division is very competitive this time of year, primarily in the Eastern Basin of the lake at Henderson Harbor and Oswego. This year, Jim Hubbard of Dexter caught the top walleye, a 12-pound, 6-ounce fish, on the final day of the derby to win the category and a check for $1,000. He fished with his son Ryan off Point Peninsula near Chaumont Bay.

“We were running baits off boards behind our 19-foot Lund at 2:30 a.m. when the fish hit our Berkley Flicker Minnow in Green Alewife,” said Hubbard. “Our lure was about 80 feet back and we were fishing over 24 feet of water. There was a little bit of excitement because the fish hit the middle board and it became tangled up in the inside board. However, we were able to get the net under him. It was a big fish.”

While it wasn’t a personal-best walleye, this was only Hubbard's second derby and he was happy to beat some local diehards who fish the derby regularly.

Check www.loc.org for details on the final leaderboard. It’s important to note that Lake Ontario is open for business despite a state of emergency for the shoreline communities. All launch ramps are open in Niagara County.