Even before the holiday weekend begins, Western New York will endure a risk of severe thunderstorms for a portion of Thursday. As The News' T.J. Pignataro explains, most of the threat for violent storms will be well inland from the metro area, to the east and south.

As is so often the case this time of year, a southwest to west gusty flow off cool Lake Erie by midday will help stabilize the atmosphere across most of the Niagara Frontier, and suppress most of the severe threat well to the south and east of Buffalo. That trend can be seen here in this high resolution model: 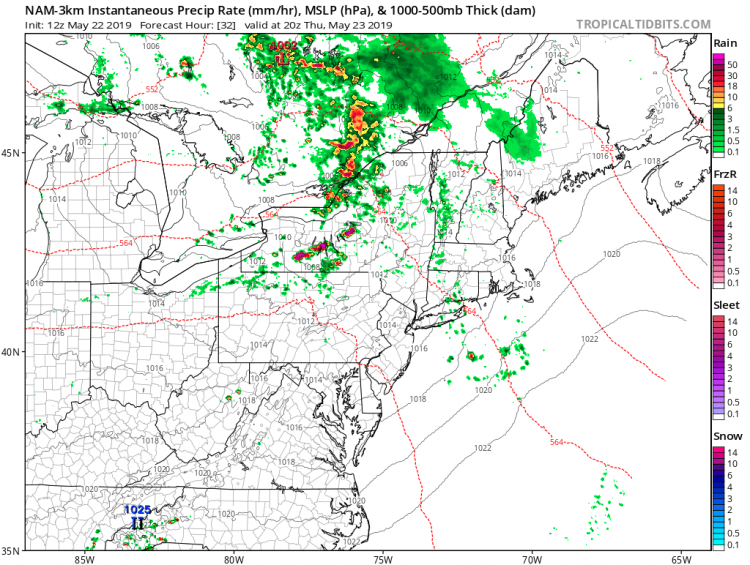 A few strong storms around midday east and northeast of the metro area can’t be ruled out. The strongest storms by mid/late afternoon will be farther south and east.

If you’re starting your weekend Friday, it will be a little cool for the pool, but otherwise a very pleasant day. The sky will be mostly to partly sunny, with light winds and temperatures topping off in the mid-60s (average high is in the upper 60s). The light winds will make it feel a little milder. This simulated modeled cloud cover may be a bit pessimistic. When the sun is shining, the UV index will be high. In fact, anytime there is abundant sunshine in late spring, just assume you can burn easily.

Saturday becomes a dicier matter. While I don’t foresee an all-day rain, scattered showers and thunderstorms will develop for a portion of the day, becoming most likely in the afternoon.

The dynamics to make strong storms may be sufficient for a limited severe weather threat mainly south and southeast of the Niagara Frontier. The Storm Prediction Center has assigned a slight/15% risk for a few severe thunderstorms with damaging gusts, out ahead of a cold front sinking to the south. Ahead of the front, temps should reach the mid- to upper 70s, with increased humidity.

Some shower activity may linger into Saturday night, mainly south.

Sunday should be dry across the Niagara Frontier, including the metro area, with partial sunshine and temps reaching the low 70s. The Southern Tier may have more cloud cover, keeping readings a few degrees cooler, and just a few showers well south can’t be ruled out:

Memorial Day will be dry with partial sunshine and light winds for memorial ceremonies in the morning, and for the parades. There is a small chance for a stray shower or two closer to Pennsylvania in the afternoon. In the American/GFS model, high temps reach the upper 60s.

In summary, the warmest day will be Saturday, but that is the day with the greatest threat of showers and storms for a portion (not all) of the day. Sunday won’t be truly summery, but the high temp should edge just above average. If there are changes to this forecast, I will update you in the comments section below the article.

As for next week, both the GFS and the Canadian GEM show a few periods of unsettled weather with some showers and storms. The timing between the two models differs greatly, which is a stark reminder precipitation forecasts beyond day 7 become something of a crap shoot, basically worthy of the phrase “not to worry.” Temperatures are somewhat more reliable in that time range than rainfall. The upper air pattern in the ensembles/multiple runs of models start the week with seasonable temperatures, as seen in the European/ECMWF ensemble. The warmest high pressure ridging is suppressed to the south. 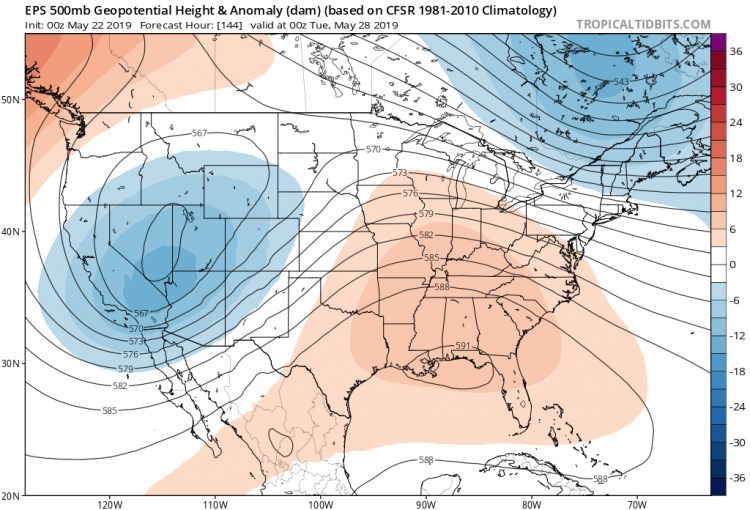 By the end of next week, the warm ridge has been suppressed farther south and weakened, while a west-northwest flow at upper levels returns to our region.

Such a flow would allow for the passage of disturbances and cool fronts from time to time and might well keep it a little cool for the pool toward next weekend. With presumably similar thinking, the Climate Prediction Center keeps probabilities for near normal temperatures higher near us, with the cooler than average readings dominating just to the west of us.

If this guidance doesn’t change, it means last Sunday’s 83-degree high will have to stand alone for a while longer.