As he prepares to trek across the Canisius High School stage Thursday to receive his diploma, Jaurney Boyland’s first name is a homophone that doesn’t begin to describe how far he’s come.

In fact, if you base predictions on stereotypes, he never should have gotten this far.

With a father in prison and a mother he had to get away from when he was 11, he easily could have ended up, in his words, "dead or in jail."

Instead, he will don a tuxedo for graduation and prove what kids can become with the right support system that draws out the best they have inside.

"He’s one of the happy stories that we really feel so good about," said the Rev. Edward Durkin, principal of NativityMiguel Middle School, where Jaurney attended the St. Augustine Campus for boys.

Canisius registrar Michelle Battin, who’s known Jaurney since both were at another high school, has seen a similar transformation.

"In the last two years, I’ve seen him mature into a man. I think Canisius has taught him that it’s more about what he can give to others," she said.

She pointed to his role mentoring younger students over the summer in the school’s Higher Achievement Program, as well as his trips back to St. Augustine to talk to kids there.

That evolution has Jaurney headed to Morgan State University in the fall.

But it wasn’t easy getting there.

His father made headlines for all the wrong reasons – multiple prison stints – and is now in Attica on weapons charges after running what federal officials called a multi-state debt collection racket.

While living with his mother, he had to take care of younger siblings while learning things no youngster should be exposed to: like how to disguise a drug problem by dissolving pills in a Squirt bottle because she thought its green tint and the pop’s natural fiz would obscure what was happening.

But kids are smarter than many adults think.

By age 11, Jaurney had to get away. That’s when Juanita Boyland stepped in – as she’s done for many of his 13 half-siblings – and became her grandson’s legal guardian.

Durkin calls her "the real hero in this story." 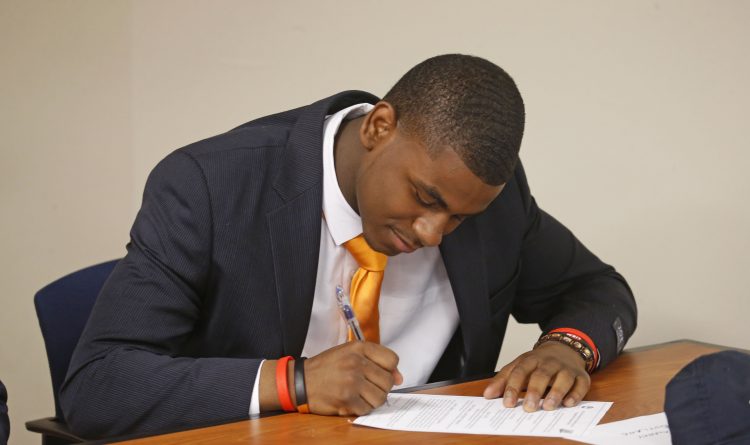 Boyland took him out of public school where things weren’t going well and it seemed he was headed for special education even though "I told them he was not a special ed kid." She got him into St. Augustine with the help of Mark Kramer, a mentor and former youth football league coach who sees more in the boys than just athletics and has steered other kids to St. Augustine.

Even then, it wasn’t easy.

"He was rough," Boyland says of her grandson as the two sit in their Harvard Place living room. "I had to get him de-escalated or we never would have worked.
"We got through some serious battles," she adds, laughing.

The two seem to have an easy rapport. She teases him about the "moon over Miami" when his pants came down during a gymnastics meet. A stellar athlete, he still won.

He shoots back when describing his favorite class at Canisius, an English class in which they discussed "The Adventures of Huckleberry Finn," racism and even the N-word, which the 17-year-old with music industry aspirations thinks is OK for blacks to use but not whites.

"If we took it back, re-mixed it and culturalized it, what’s wrong with that?" Jaurney asks rhetorically, as his grandmother groans.

"You’re from the South, though, Grandma – and the '50s," he says, as if that explains everything.

Rod Watson
Project takes art to the community to help teens cope with pandemic
Violence was wrong, but let's not pretend we don't understand it
Instead of closing good charter schools, why not learn from them?
A Catch-22 when cops exist to serve and protect – and to ticket
More Stories

But it’s easy to see why Durkin calls Boyland the hero. Using the lessons learned when she was younger and felt embarrassed after using inappropriate language, she impresses on Jaurney the importance of the unwritten rules that are often the most important.

"In order to be better than that, you have to filter the things you take in," Boyland says, adding that she warns all of her grandchildren about ingesting the "garbage" they can pick up from TV, music and other media. "When it’s time to react, you’re going to pull from what’s within you."

It’s that kind of wisdom that prompted her to transfer him to Catholic school, with help from the BISON Children’s Scholarship Fund that gives low-income families the same educational options other families enjoy. Boyland, who was honored over the weekend with the Turn Around Award at First Shiloh Baptist Church’s "Purposeful Women of Faith" awards breakfast, recognized the necessity of having everyone dealing with Jaurney be on the same page.

"It’s important that the people on the outside you have dealing with the kid are in tune with you," Boyland said of the supportive environment she found at St. Augustine and now at Canisius. "They echoed what I was saying to him so he could understand. And the echoes from more than one person helped."

Not that Jaurney isn’t still stubborn. He remains proud of the fact that he holds what he thinks is the record at St. Augustine for having to write out "I will not disobey the rules in Mr. Dorcely’s class without retribution" 3,500 times. How did the penalty get that high? It kept doubling as he kept disputing that he’d done anything wrong. He says he taped four pencils together and finished it in about a week of after-school detention.

A two-way football player as well as a basketball player at Canisius, Jaurney – who’s traveled the country playing youth sports – picked Morgan State after hearing about it from a classmate who happens to be the son of the football coach there. He sent films to the coach, former Buffalo Bills running backs coach Tyrone Wheatley, who liked what he saw but wants Jaurney to give up playing cornerback and just catch touchdowns as a wide receiver. The 6-1, 185-pounder has no problem with that.

Off the field, he’ll major in business with a minor in music.

"I don’t like to be bossed around," he says. "I want go to school to learn how to produce my own music so I don’t have to pay nobody."

Exemplifying the give-back spirit Durkin and Battin described, he also says a long-range goal is opening a sports complex for kids here.

Battin says his grades were in the low 80s the last quarter, but based on his SAT scores she knows he can do better.

At Morgan State, he’ll have that chance, thanks to "the village" that includes Boyland, Kramer, the BISON Fund and all of the teachers and administrators at St. Augustine and Canisius who saw the potential that easily could have been ignored.

Granted, that’s easier done in small schools like St. Augustine or Canisius, which boasts a 12-1 student-teacher ratio, than in a sprawling public school system hamstrung by rules, larger classes and a more bureaucratic culture.

But while celebrating Jaurney’s success, we also should be asking: How can we give all kids this kind of support? Maybe the community schools the Buffalo Public Schools have started will be one answer.

But Jaurney couldn’t wait that long.

It’s to our benefit that he didn’t have to.