I.M. Pei, the globally important architect, died last week. Around the world, architectural historians spoke with reverence of his work, such as his glass pyramid at the Louvre, the East Building at the National Gallery or, closer to home, the Everson Museum of Art in Syracuse.

My reaction was more primal. Fifty years ago, I was a kid in Dunkirk, living on the same street as a steel mill, when Pei's firm handled the massive expansion at nearby SUNY Fredonia, where I attended college a decade later.

Considering the times, describing that project as dramatic is inadequate. Dunkirk and Fredonia were interconnected communities, a hardworking place where a radiator plant or a ketchup factory was not far from a landscape of dairy farms and vineyards. The existing buildings at Fredonia were quiet structures of red brick, emblematic of the style all around them.

The expansion, handled by the firm of a modernist genius, was a wild departure. The heart of the new campus was an intertwined complex of curved and terraced buildings of reinforced concrete, all connected by a walkway known as “the spine.” Maytum Hall, a new 9-story half-moon of a tower, immediately became an utterly distinctive landmark on a Chautauqua County "skyline" that until then held only smokestacks and water towers.

As children from a factory town, we were fascinated, riding our bicycles there to play elaborate games of chase in walkways rich with the scent of new concrete. For the most part, adults tolerated our presence, and we felt a kind of explorer's astonishment in buildings filled with lookouts and hidden nooks and unexpected stairways.

Around the area, people either embraced the design or hated it. Yet it took a couple of phone calls after the passing of Pei for me to finally learn, definitively, how the intimacy we sensed as children reflected the concern that went into shaping the campus – and how heartbroken the original architect is today about some changes that have happened since. 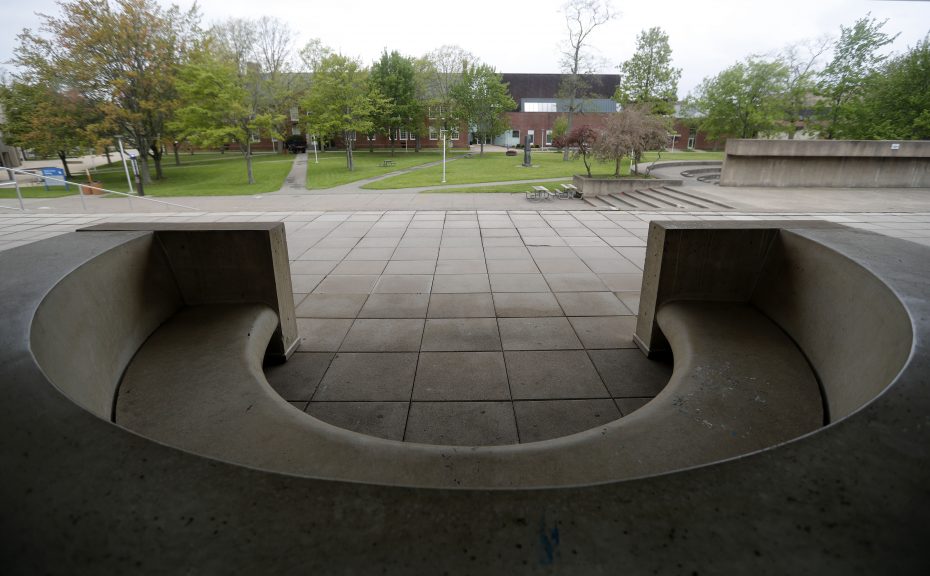 Along the spine: View from exterior seating at Reed Library, an area envisioned by Pei Cobb Freed and Partners as the absolute center of the SUNY Fredonia campus; to the right is a small amphitheater that Ted Musho, one of the original designers, said then-Fredonia President Oscar Lanford fought to save. (Mark Mulville/Buffalo News)

It turns out the expansion, built between 1967 and 1971, was designed in eloquent detail by Henry Cobb, Pei’s longtime colleague with the firm of Pei Cobb Freed and Partners – and the University at Buffalo dormitories in Amherst known as the Governors Complex were essentially built from the same plans.

Cobb, now 93 and living in Manhattan, is the designer of such landmarks as Boston's Hancock Tower and the Moakley federal courthouse. During a long conversation last week, he recalled how he and Pei lunched together almost every day, for years.

“I trusted him and he trusted me, and I looked up to him as a master,” Cobb said.

Their partnership began after Cobb studied under Pei at Harvard, where Cobb came to appreciate Pei as a visionary whose outlook was always "open, inclusive, rather than closed."

In those years, Cobb said, “We really wanted to enrich the palate of modern architecture, and our chosen material in those early years was reinforced concrete, and the Everson was part of it, as was Fredonia – but Fredonia was quite different.”

In Syracuse, Cobb said, Pei’s 1968 Everson Museum of Art – a critically important step in Pei's career – involved reinforced concrete of such exquisite detail that “every inch was bush hammered by hand.”

At Fredonia, Cobb said the budget for tripling the size of the campus was too modest for the same approach. One of Pei’s strengths, Cobb said, was that he did not reflexively reject the past. So Cobb decided to render the heart of the new campus at Fredonia “in concrete, but very much built to relate well to the original buildings, which were of simple red brick.” 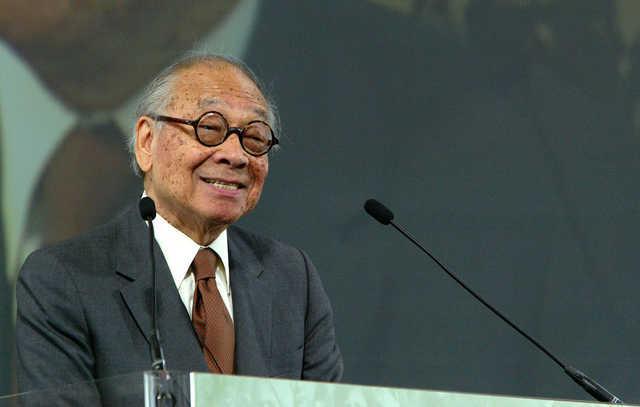 Cobb’s vision began with a curving student union linked by an elevated walkway – a “spine” he describes as the soul of the design – to an academic building called McEwen Hall and then to Reed Library, whose elevated entrance offered the core statement.

“It acknowledges that the library is at the center” of the university, Cobb said. In other words, in what retired Fredonia art history professor Dan Reiff sees as the original brilliance of the work, the students and faculty are clearly primary.

The concrete trail continued to Maytum Hall, nine stories tall and "built as an explicit acknowledgement of the library it serves,” Cobb said. Across from it was the Rockefeller Arts Center, with its showcase theater.

I told Cobb of our elaborate games of chase as children, how we would often look out from a little glass observation perch atop Maytum, a view that allowed us to see far beyond the boundaries of a steel town we rarely left.

Cobb laughed, softly. In our sheer awe, we were early advocates of the essence of the work.

There was also a winding ring road lined with poplars, overseen by revered landscape architect Dan Kiley, meant as a gesture toward the surrounding countryside. The dormitories, Cobb said, were built in a way to foster student communities. They were of brown brick, "intended to relate well to the original buildings,” as well to what Reiff said were nearby streets of older homes.

While Cobb does not want architectural sorrow to dominate a piece honoring Pei, he said the state allowed “terrible things” to happen to Fredonia's original design. A 1991 decision to move the library entrance to a new addition, a choice Reiff said was based on security problems, rejected the main notion of the entire project, Cobb said.

Ted Musho, 86, Pei's senior associate for design on the original project, said that shift caused a long-term change in purpose: Students no longer had the same need to walk the elevated spine. The ultimate consequence, to Cobb's dismay, happened three years ago: Fredonia removed much of the spine, citing both the change in foot traffic and the high cost of restoring crumbling concrete.

To Cobb, that struck a blow to the essence of what he and Pei envisioned. Asked about the Governors Complex dormitories at UB, he said the plans were pulled from a SUNY file at a time when UB needed dorm space, and duplicated a design from Fredonia.

“I’ve never seen it,” he said of the Governors Complex. “It’s probably a little out of place.” 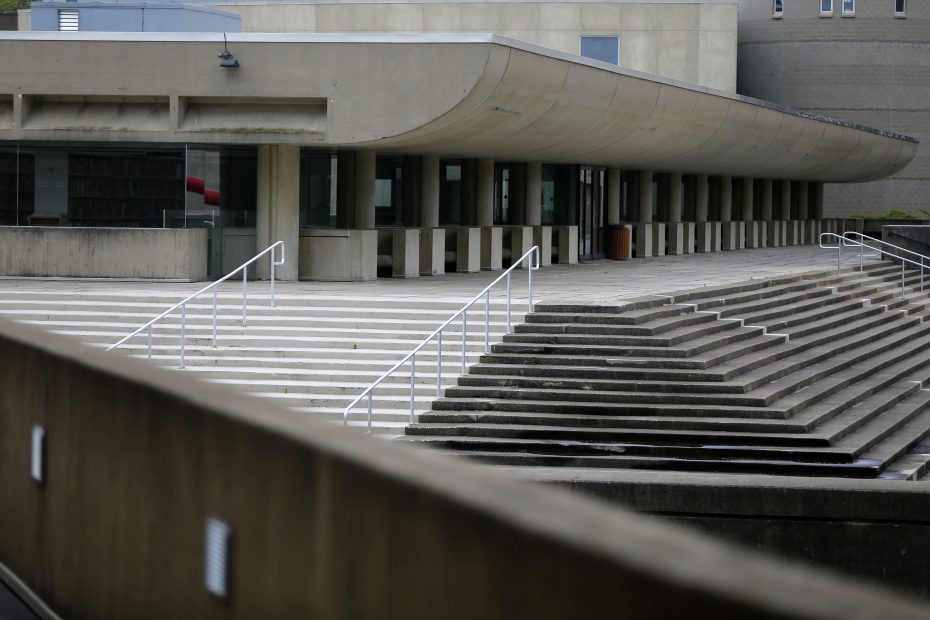 A walkway leading from Maytum Hall to Reed Library on the campus of SUNY Fredonia: In the original design, the elevated area outside the library was seen as the heart of the entire new design. (Mark Mulville/Buffalo News)

Musho finds a touch of consolation at Fredonia in the survival of a small outdoor amphitheater near the library. That intimate retreat was almost lost amid budget constraints, and Musho said then-Fredonia President Oscar Lanford fought successfully to save it.

According to clippings at the Fredonia archives, Pei visited Fredonia for the 1964 announcement of what he called “an important project to our office,” comparing a new design for a campus to planning out a city. Raised in Hong Kong and Shanghai, Pei “brought this wisdom from his childhood, from this deeply embedded culture, yet he was so open and so skillful in acknowledging and finding a way to make a contribution to Western culture,” Cobb said.

Of Pei's impact on his own work, Cobb said, "We shared the same staff and the same ideals and we were part of the same enterprise, and Pei was absolutely the leader of that enterprise."

What Cobb achieved at Fredonia, then, was encouraged and embraced by Pei. If you go there today and stand at what was once the elevated entrance to the library, the spot Cobb and Pei perceived as the nerve center of campus, you understand the revelation underlying their design.

The heart of a university should belong to those hungry to learn, even a little kid who hears the buildings themselves saying he is welcome in this place.