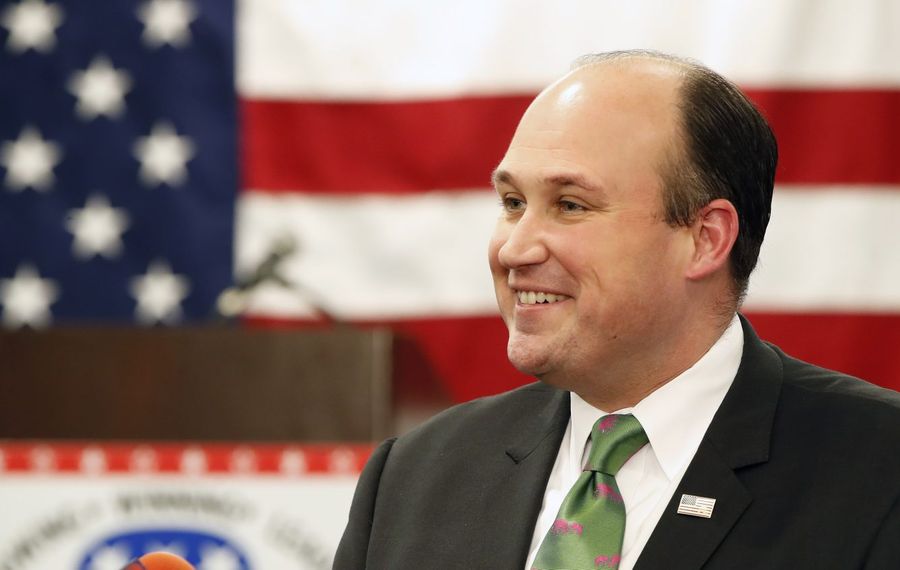 At the 2010 Republican State Convention in New York City, few of the grizzled old pols running things were paying attention to the 29-year-old, rookie chairman from Erie County.

Not until, that is, Nicholas A. Langworthy found an obscure rule to pull off what party leaders were trying to prevent – a speech by Carl P. Paladino, the insurgent Buffalonian seeking the nomination for governor.

“Rules of the party said a candidate can’t make a speech until after the nomination,” Paladino recalled Monday, just hours after Langworthy secured enough votes to become the new state Republican chairman.

“But Nick was scheduled to nominate me, so he just substituted me for him,” Paladino continued.

Paladino got to make his speech despite the opposition of party Chairman Edward F. Cox, and GOP delegates from around the state took notice.

“People were impressed,” Paladino said Monday. “He really showed his mettle and Ed Cox was sort of dumbfounded by it.”

Langworthy appears to have outmaneuvered Cox again after traveling the state for months and making his case for a change at the top. Cox, the son-in-law of the late President Richard M. Nixon who has led the party for a decade, recognized he lacked the votes for another term early Monday when Monroe County Chairman Bill Reilich – leader of the largest holdout county – said he would support Langworthy.

Late Monday Cox officially bowed out of the contest with a statement calling his 10-year chairmanship "one of the most rewarding chapters of my life."

"I will be fulfilling the remainder of my term, and in the process, work to unify the Party and ensure a smooth transition for Chairman Langworthy," he said.

Langworthy added he anticipates positive results from his meeting with Cox in Albany.

“I look forward to meeting with the chairman and a productive transition,” he said Monday. “I think it will be helpful.”

The change in leadership, which becomes official at the state committee meeting in July, takes place as Cox is apparently provided a graceful exit by President Trump’s political operation with Monday afternoon’s announcement of a campaign role for the outgoing chairman.

“I’d like to congratulate Ed Cox on becoming the newest member of the Trump Victory finance team from New York,” said Trump 2020 Campaign Manager Brad Parscale. “He has been a fantastic state party chairman for nearly a decade, and I can’t think of anyone better to help ensure we have the resources we need to compete in 2020.”

Cox said he was honored to accept the new role.

Now Langworthy – at 38, still considered a newcomer by some party veterans – becomes the first Republican chairman from Erie County since Edwin F. Jaeckle, a confidante of former Gov. Thomas E. Dewey, in 1944. He inherits a party significantly diminished since Dewey’s time, and even from the era of former Gov. George E. Pataki, who was the last Republican elected statewide in 2002.

Republicans lost their last bastion of power in the Senate during the 2018 election, and some say they could be reapportioned into oblivion in coming years. Langworthy emphasized all of the party’s gloom and doom while traveling the state in recent weeks to make his case.

“An awful lot of people want to see a bolder direction for our party,” he told The Buffalo News in March. “That requires change.

“I know what I’ve accomplished and what our organization has accomplished,” he added, referring to the Erie County GOP. “2017 and 2018 were no picnic anywhere, but we still held.”

Cox had pointed to a series of internal reforms he planned for the statewide party and argued that staying the course presented a more prudent option. The 73-year-old veteran of state and national politics also emphasized his connections to longtime Manhattan sources for financial support.

But Langworthy collected a significant bloc of support in recent weeks as he traveled the state, gaining chairmen and committees from primarily upstate organizations. Cox, meanwhile, drew backing from the influential downstate committees in Nassau, Suffolk and Westchester counties.

Langworthy is no stranger to the statewide scene. A South Dayton native and Niagara University graduate, Langworthy has proven a mainstay of Republican politics since becoming leader of the state’s College Republicans and then breaking in as an aide to former Rep. Thomas M. Reynolds. He went on to work for former Rep. Chris Lee before becoming chairman of the Erie County Republican Committee in 2010 at only 29.

Reynolds said Monday he recognized early on the qualities his young aide would bring to the process.

“I just saw great talent in a guy keenly interested in politics,” Reynolds recalled Monday. “He’s 24/7 politics. Other than being a good husband and father, that’s the chairman-elect.”

Reynolds, another former Erie County chairman, said his former protege earned the new job by traveling the state and convincing county leader after county leader that the party needed a new direction after so many defeats.

“I think people were ready for change, a fresh face and a record [of accomplishment],” he said. “He knows how to count, work hard and motivate people.”

Republicans from around the state were weighing in Monday as they look to revive their party. Dutchess County Executive Marc Molinaro, the 2018 GOP candidate for governor, said he looks forward to a new direction for the party.

“I have gotten to know Nick and found him to be a talented and charismatic leader, who knows what it takes to attract good candidates and win in a blue county,” he said.

Langworthy said Monday he has not yet decided whether he will remain as chairman of Erie County's Republicans.

“Taking things one step at a time,” he said.