Stacey Clause was drawn to a foot race in downtown Buffalo this weekend by the power of memory – or, more specifically, by a threat to it.

Clause, 34, fell in love with running about a year ago. That steady routine had a dramatically positive effect both on her health and on her sense of clarity, and she tries to do at least one 5-kilometer race a month. She was scrolling around the internet not long ago, looking for that monthly option, when she noticed an annual event at 10 a.m. Sunday morning.

“Run, Jimmy, Run,” a 5K run and walk, is held in memory of Jimmy Griffin, who served 16 years as Buffalo's mayor. The run begins and ends at Sahlen Field, the ballpark Griffin helped will into existence. Those who preregister receive a ticket to Sunday's Bisons game, and the course traces a path near many of the buildings and projects that Griffin was involved with during his years in City Hall.

The race also benefits the Alzheimer’s Association of Western New York, and no cause is more important to Clause right now.

Her dad, Norm Fingerlow, of North Tonawanda, was told he had early onset Alzheimer's at 59, not quite two years ago. Once Clause found out about the race, she and her husband Nick had no problem convincing Norm and his wife Chris to sign up. Her brother Jeff and his girlfriend, Leah DiMatteo, are also running.

Beyond all else, Chris Fingerlow said, they do it out of gratitude.

“The Alzheimer’s Association has been amazing to us, and anything we can do to help, we try to do,” Chris said, speaking of the services for families offered by the organization. 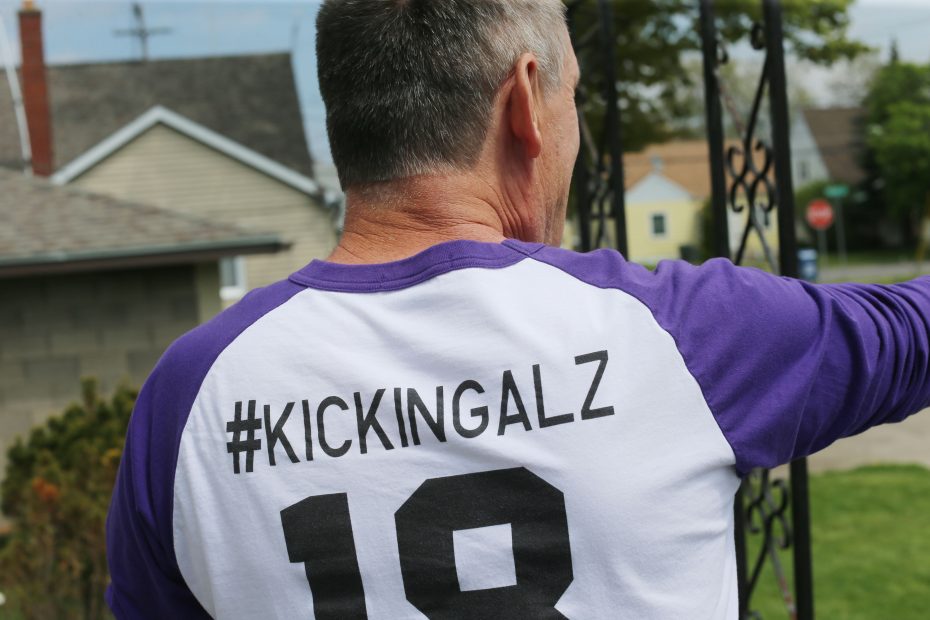 The Fingerlows emphasize their hope of bolstering knowledge about a devastating illness of growing prevalence. Norm worked as an engineer at Moog. With early onset, Chris said, the question of finding health insurance, once Norm took early retirement, became a major worry. There is no history of Alzheimer's among his relatives, and his situation underlines how no one is immune.

Yet Chris and her family want to reinforce the message that life does not have to become a grim, despairing slog once the doctors utter the word “dementia.”

“It’s a terrible, cruel disease, but my dad is the same person,” Clause said. For all the trials, she especially delights in seeing the way he brightens up in the presence of her 11-year-old son, Brendon.

Indeed, Norm, in conversation, cracks jokes, speaks passionately about his illness, grows emotional while thanking his wife for all she has done – and describes the raw frustration when an event that happened five or 10 minutes ago abruptly turns into a whiteout in his mind.

"Too many times," he said, pausing as he searched for the right words, "I can't put a sentence together without doing this."

About 5.8 million Americans are believed to be living with the disease, according to Alzheimer's Association statistics, a number expected to more than double by 2050. Already, it is rare to find anyone whose circles of friends or relatives are untouched by Alzheimer's.

Maureen Griffin Tomczak, one of the late mayor’s three grown children, said those factors provide a powerfully fitting element to a race honoring her father. She said many people in the community began suggesting holding some fashion of high-profile athletic event as a tribute shortly after his death, 11 years ago this month.

His children, remembering Griffin's love for a “fun run” at South Park Lake, embraced the notion of a race closely intertwined with the ballpark and the Bisons, the team Griffin helped bring back to Buffalo.

While her father did not have Alzheimer’s, Tomczak said the doctors discovered, after his death, that he had a rare and degenerative brain disease called Creutzfeldt-Jakob. The wide-ranging symptoms include memory loss.

“Like Alzheimer’s on steroids,” said Tomczak, who realized something had changed with her dad when Griffin, a guy who always had relentless energy, began sleeping 20 hours a day in his late 70s.

She remembers walking out of an emergency room, on a day when Griffin had been struggling, and the doctors initially reassured the family. Her father, in a moment of characteristically fierce clarity, turned toward her and said, “Something’s wrong. This is not dehydration. I’m really sick.”

He sensed the truth. The Griffins learned fast lessons about watching someone of great vitality swept up by such an illness, and they grew keenly aware of the importance of dedicated care when the larger world often has no idea of the nature of the struggle.

Certainly, Maureen said, Sunday’s race will celebrate her father's public life and many of the places that he loved, with runners assembling near a statue at Washington and Swan streets, put up in his honor. “But it’s also a day to celebrate caregivers, to celebrate hope,” she said.

As for Norm Fingerlow, his decision to run the race is a statement of presence and meaning from a retired engineer who rarely slowed down over the past 40 years. For decades, he coached youth football in North Tonawanda. Chris said he was once named coach of the year at Jim Kelly's football camp. 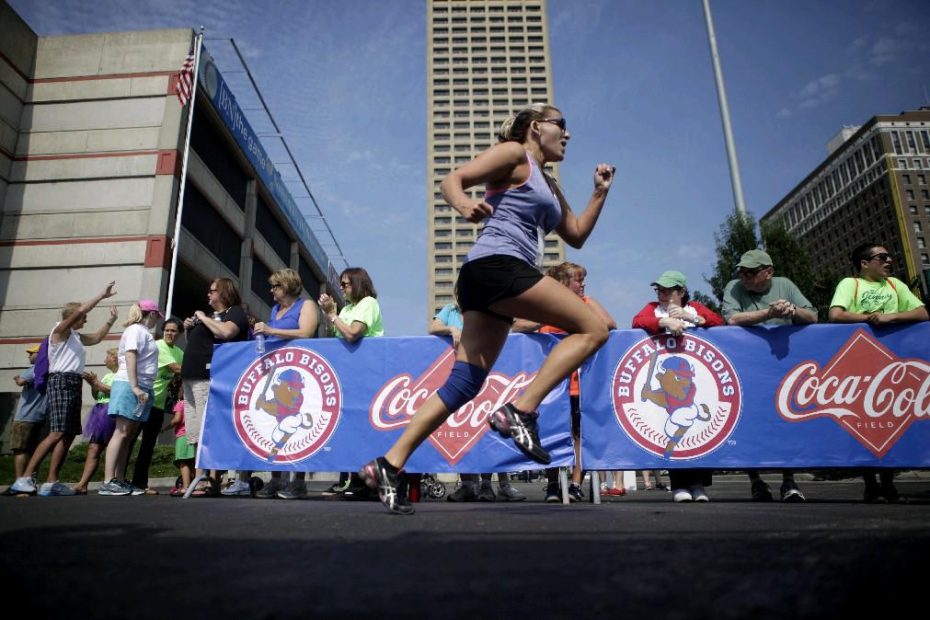 Val Johnson of Blasdell makes her final strides toward the finish line in the first "Run, Jimmy, Run" 5K race and walk on in 2013. (Buffalo News file photo)

She met him in the 1970s, when they were teenagers. If Norm always had one especially impressive aspect amid day-to-day worries, his wife and daughter agree, it was an astounding sense of balance, the way he reacted with the same calm assurance whenever they faced abrupt obstacles in their lives.

“He always handled things so well,” Clause said. If she had a problem that seemed overwhelming, her dad would listen and then tell her with utter confidence, “It’s going to work out.”

One of the biggest indicators of his Alzheimer’s, Chris and her daughter said, was the way a man as even-keeled as anyone they had ever met began having bursts of frustration when everyday tasks, such as writing his name, suddenly turned monumental.

"Anxiety? My dad?” Clause said. “Before this, those two words never came together in my mind.”

Norm and Chris welcomed an interview for the same reason they are entering the race: They hope to change perceptions, and maybe gently prepare others who are unaware they will soon face the same challenges. Since Norm learned of the Alzheimer’s, Chris has sometimes been surprised at questions asked by complete strangers. 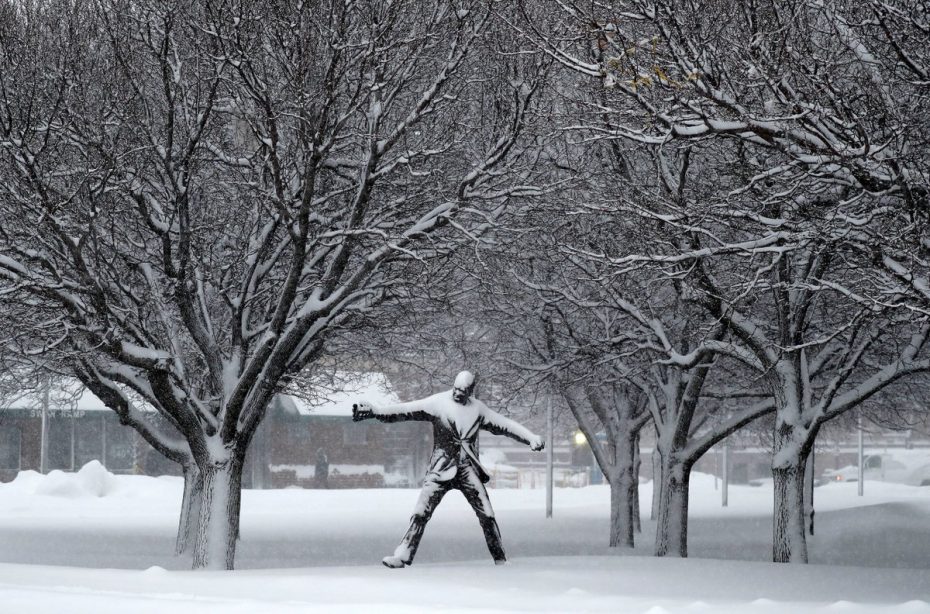 She recalled how she wore a purple Alzheimer's jacket into a store one day, and a woman there asked her if she married a much older man. And Clause said she has heard remarks, intended as compassion, assuming her father must already be in a nursing home.

"You don't roll up into a ball," Chris said of her husband, who is home, staying busy, still with that vibrant sense of humor. If the Fingerlows take one great lesson from their experience, a truth the Griffin family learned as well, it is that you recognize each good day and familiar moment and embrace them, with passion.

Sharing that knowledge, the idea of everyday treasure found in the hardest place, is why Norm is entering Run, Jimmy, Run. "I hope," he said, "that it brings some light."