It was the best preseason in FC Buffalo's decade of existence.

Players, staff and a handful of The Situation Room supporters spent eight days in Germany, from May 5-12, visiting Hamburg, Dortmund and Frankfurt for matches, training and to soak in the country's soccer-crazed culture.

For the most part, the Wolves won't look back on the Germany trip and remember the results of the three games. They will remember, however, special moments on and off the pitch. There's the warm hospitality of FC St. Pauli, the milestone of the first NPSL goal on European soil, the meet-and-greet with American superstar Christian Pulisic, and a raucous supporters march before a Borussia Dortmund Bundesliga game.

Here are the favorite memories from three players and two staff members from the first European trek by a National Premier Soccer League club.

After participating in the Dortbunt Festival, FC Buffalo attended the Borussia Dortmund vs. Fortuna Dusseldorf match on May 11. The clash doubled as Pulisic's final game in Germany before the American star's transfer to Chelsea of the English Premier League takes effect.

"A group of us decided to walk to the [Borussia Dortmund] game well ahead of the start and we wound up running into what I would guess are their Ultras," Derkacz remembers. "They were just chanting the whole 25-minute walk to the stadium. Very cool."

Derkacz, a former FC Buffalo player and the present associate head coach for the University at Buffalo women's team, took a cell phone video of the Ultras preparing to march to Westfalenstadion (Signal Iduna Park, officially). It might send chills down your spine.

While the Hartwick grad described meeting Pulisic as "surreal," it didn't trump the experience of the trip's final match, a friendly against Dortmund XI during the Dortbunt Festival.

Not surprisingly, Walter's hatred for losing factored into his highlight. After falling short in the first two tilts in Germany, FC Buffalo creamed Dortmund XI, 5-1, with Walter tallying a goal. The victory concluded the trip with a much-needed high note before Sunday's NPSL season opener in Rochester. 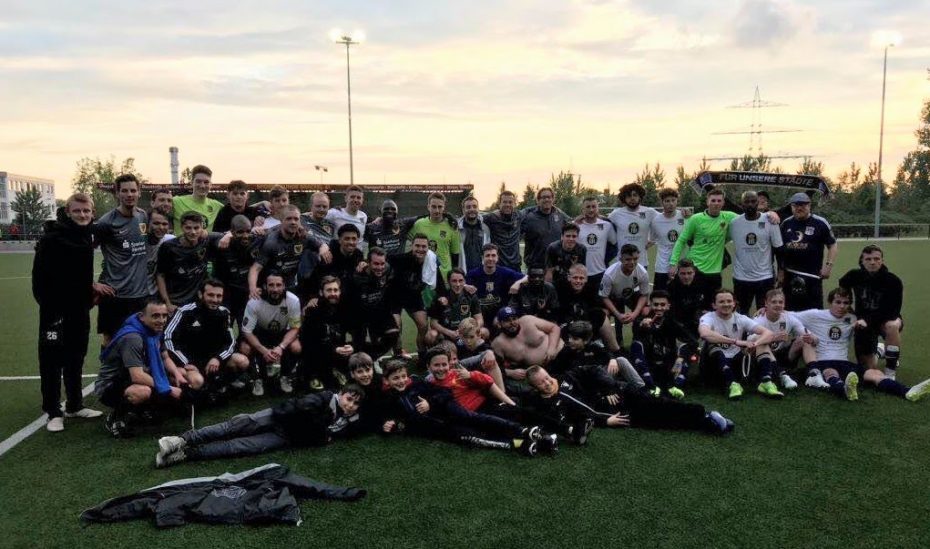 FC Buffalo and Dortmund XI pose for a picture after the final match of the Germany trip. (via Chris Walter)

"We played very well, getting our first 'win' as a team, giving the traveling fans five goals to cheer for and the first 'W' of the season was awesome," Walter recollected.

"The opposing team and hosts were incredible and offered us free food and beers after [the game] where everyone hung out and got to enjoy the moment," he said. "Being given two cases of free beer to enjoy after the game as a team is legendary and I’ll always remember that."

SF Brackel clubhouse attendant: “Where’s your captain? We have a gift.” pic.twitter.com/hdBiDHA78R 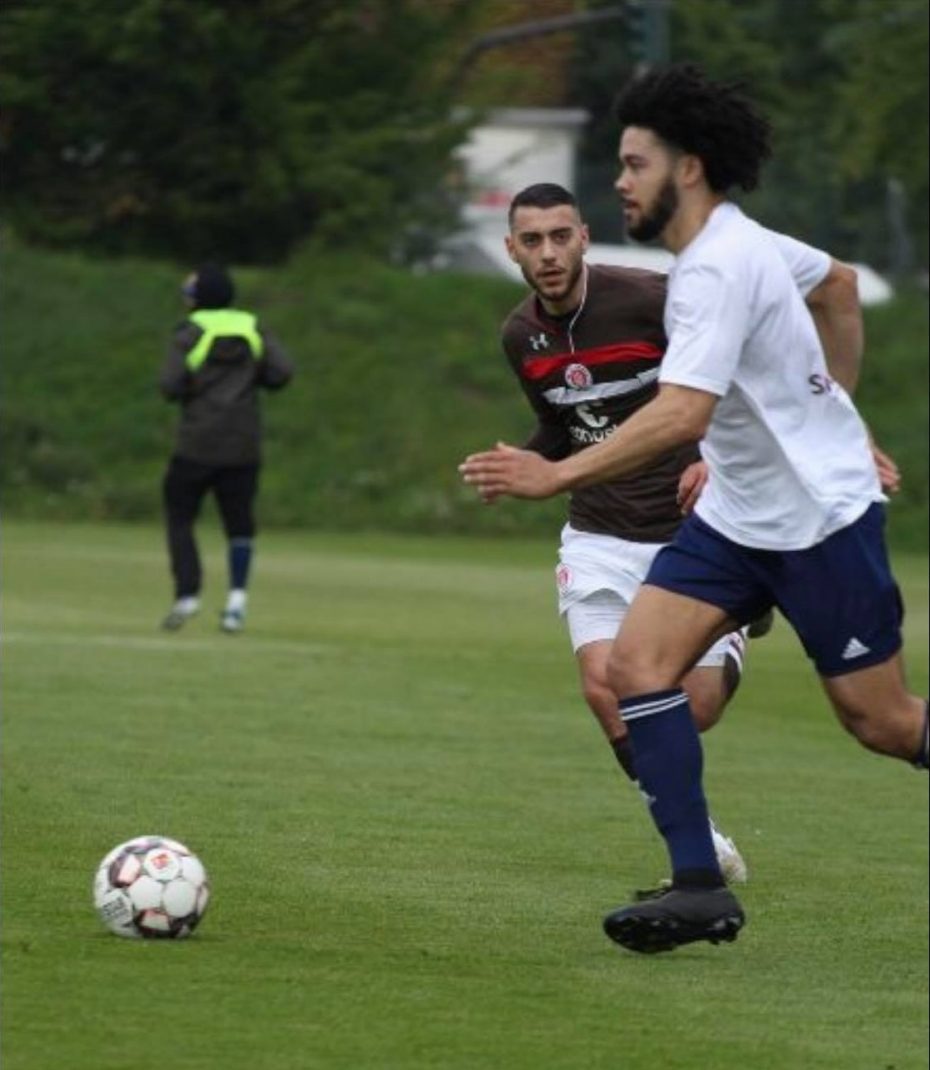 The first match FC Buffalo played in Germany was against FC St. Pauli's second team, but it was preceded by a tour of the first team's training grounds in Hamburg and an intimate look into the behind-the-scenes routines of a professional soccer club.

The soccer environment and the match itself, a 4-1 loss, had a powerful impact on Robert Williamson, the Wolves' starting center back and a recent graduate of Buffalo State College.

"The match vs. St. Pauli II was amazing," Williamson described. "Seeing the everyday operations of the facilities, routine and training sessions was something that taught me and our team a lot.

"Playing against the club really teaches you a lot about the standard and work [necessary] to reach the next level and challenges you to develop your game even further. The speed of play, patterns of link-up play, and organizational discipline are the aspects I’ll take with me the most from that match."

FC St. Pauli returns the favor on May 25 when the first team comes to All-High Stadium to play the Wolves in a friendly. FC Buffalo posted a story called "Why FC St. Pauli matters" on its website; it's worth a read.

If the NPSL records milestones, Hunter Walsh's name will go into league lore as the first active player to score on European soil. It was by no means the prettiest goal the former University at Buffalo and Canisius College winger has scored, but it's likely the most memorable.

"It was an amazing moment," Walsh described. "To be able to get that first goal in a European match means the world to me. I haven’t scored many goals for FCB Buffalo, so this one means a little bit more. In the end, it was just a scrum in the box off a corner kick and the ball fell to me inside the six; I’m just glad that I could be there to stick it in the back of the net."

There's video of the goal, even if it's a little hard to tell what's happening.

The St. Joe's Collegiate Institute alum's second-favorite moment - one shared by several players we spoke to - was meeting Pulisic on game day. The reply to FC Buffalo's tweet, a close-up of Walsh's face, says it all.

Find someone who looks at you the way...... pic.twitter.com/HgC02ISao5

One of the larger reasons for the trip was to honor the sister-city relationship between Buffalo and Dortmund, formed in 1978 by a German exchange teacher at the University at Buffalo, extending well beyond the bounds of soccer.

The connection between the Western New York metropolis and Germany's eighth-biggest city is probably news to many Buffalo residents, but it was meaningful to FC Buffalo owner Nick Mendola, who was central to organizing this 10th anniversary trip.

"Having our players and staff at Dortmund City Hall to celebrate the 40th Anniversary of the Sister City relationship between Buffalo and Dortmund was surreal," Mendola said. "The mayor and county executive were unable to make it, so... there we were, speaking at a podium to representatives from several countries.

"For everything that amazed me as a soccer fan at Borussia Dortmund, FC St. Pauli, and MSV Duisburg, this is the moment that stands out as a Buffalonian," he added. "Receiving the gift of a winged rhino - they are placed around Dortmund like the bison statues in Buffalo - was a brilliant surprise, and for Lord Mayor Sierau, Stadt Dortmund superstar Fabian Zeuch and the Buffalo Dortmund Committee to leave us feeling as honored friends and not mere stand-ins or even impostors, is something we will appreciate for the rest of our life." 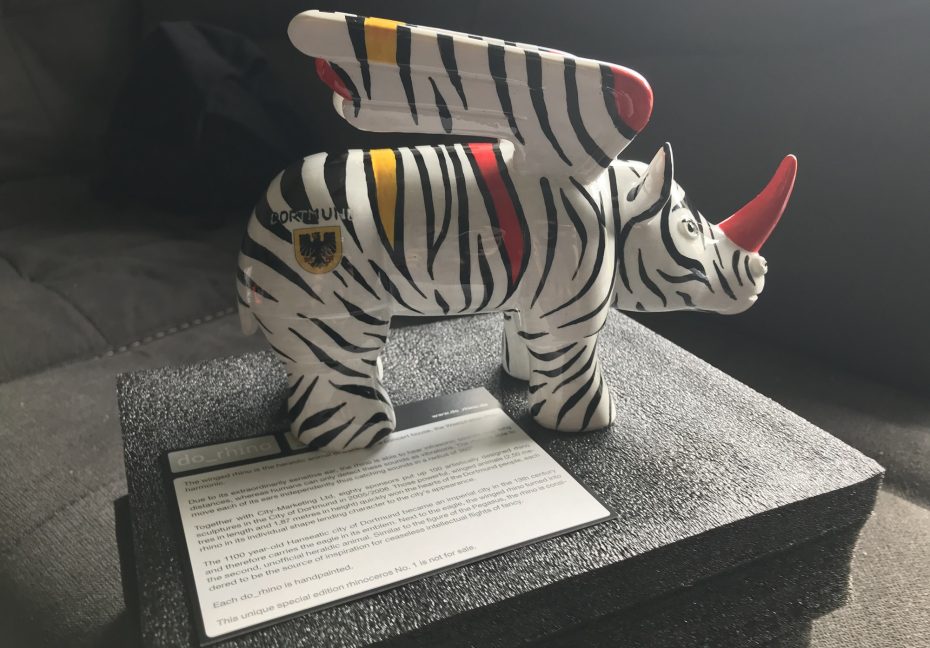 The winged buffalo given to FC Buffalo at the Dortbunt Festival during the NPSL club's trip to Germany. (via Nick Mendola)

Engaging with FC St. Pauli, a club known globally for its political and social positions and activism, plus participating in the Dortbunt Festival - a cultural celebration of tolerance and diversity - exposed FC Buffalo to issues much greater than futbol.

For another reaction to the trip - this time from a German's standpoint, read this post by FC Buffalo left back Luca Ziegler, a native of Oberroth, a small municipality not far from Munich.