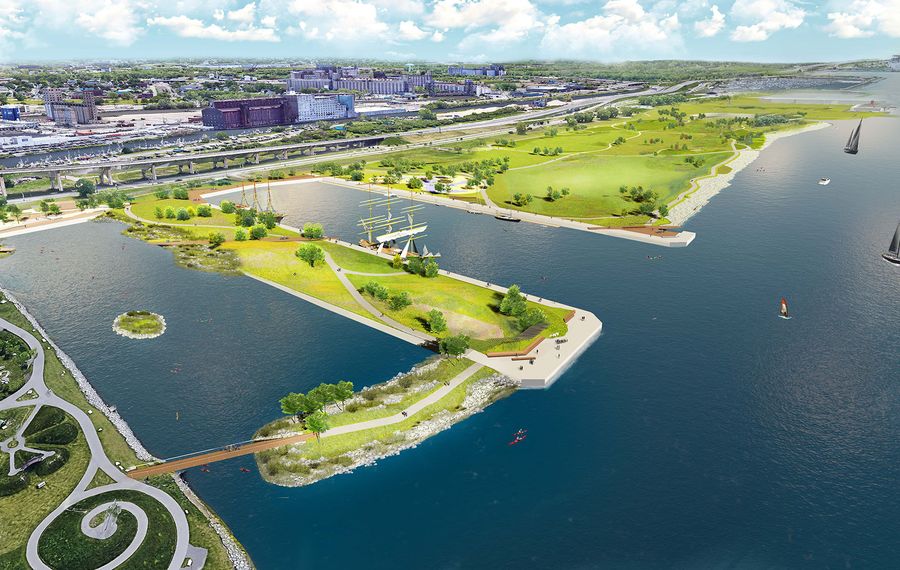 The visions for a transformed Buffalo waterfront could have been much more modest. Say there had only been a “Buffalo Million” from the state, or that the development of Canalside stopped progressing four or five years ago, or the Ralph C. Wilson Jr. Foundation gave just enough money to put up new picnic tables in LaSalle Park and throw in some dirt for the baseball diamonds. We’d still be grateful, of course, and hopeful for our region’s future.

But the reality is much more expansive, much grander than almost anyone dreamed of a decade ago, when our hopes for developing the waterfront seemed stuck like a plastic bag on a reef. Now, with the unveiling of the master plan for the Outer Harbor, as well as the conceptual design for LaSalle Park, it’s clear that we ain’t seen nothing yet.

The Outer Harbor will be reconstituted a recreational mecca, while LaSalle Park will be bigger and better than ever as the new Ralph C. Wilson Jr. Centennial Park. Canalside is still growing, with Explore & More – the Ralph C. Wilson Jr. Children’s Museum at Canalside poised to open soon, and the Buffalo Maritime Center’s plan for a replica 19th century packet boat moving forward.

There’s also the state-sponsored contest underway to figure out what to do with the Skyway, the downtown traffic artery, built in another era, that looms over Canalside like a monster in a horror movie.

Don’t forget the Western New York Land Conservancy’s plan to build a 1.5-mile urban nature trail along the old Delaware, Lackawanna and Western Railroad corridor. It will be Buffalo’s version of Manhattan’s High Line. Rep. Brian Higgins, D-Buffalo, says the linear park will be “taking the Buffalo waterfront development to the next level.”

No less significant is the $50 million donation that the Ralph C. Wilson Jr. Foundation announced last October for developing a completed regional trail system, for walkers, runners and cyclists. The foundation gave another $50 million for the LaSalle Park project.

Though each of these disparate projects has its own originators, there’s a feeling of connection between them, the sense that an ambitious vision of a vibrant waterfront will in five to 10 years be fully realized. That’s reflected in the new website buffalowaterfront.com, which – as its name suggests – covers the waterfront in promoting events and activities at the various venues along Lake Erie and the Buffalo and Niagara rivers – the great resources that put Buffalo on the map.

The Erie Canal Harbor Development Corp. this month unveiled its $125 million master plan for the Outer Harbor, a nearly 200-acre site being reclaimed after years of decay and neglect. Five miles of new trails, plus new boardwalks, new shoreline and aquatic habitats are included. Expanding access to the water, revamping the bike ferry from Canalside, food trucks and kiosks, and an emphasis on leisure activities like fishing, canoeing and kayaking are among the features.

The ECHDC has $15 million from the state’s Buffalo Billion II program to begin the Outer Harbor work, after it goes through the approval process. Organizers are confident they’ll get more state funding as the project matures.

Our transformational West Side story is at LaSalle Park, which began as Centennial Park and will include that name again. Highlights of Ralph C. Wilson Jr. Centennial Park will include a lagoon with improved water access, a playground, a new hill for winter sledding or summer gatherings, and a “great lawn” that can accommodate concerts. It will be a world-class public space.

The ECHD board just approved a wood-frame period building in which the replica packet boat will be built with the public’s help. The project, headed by the Buffalo Maritime Center, will forge a link to the Erie Canal’s historical origins.

Much of our waterfront progress would not have happened without public dollars. During Gov. Andrew M. Cuomo’s time in office, the state has spent $138 million on projects at Canalside and the Outer Harbor. Higgins secured the initial millions for Canalside. But private money, often with the help of tax breaks, follows once a new foundation is laid. Terry Pegula built HarborCenter, across from Canalside. A group of developers brought Buffalo RiverWorks into existence.

Buffalo’s growth spurt along the waterfront is a healthy sign. As it spreads to more parts of the city, we can declare it a full-blown renaissance.