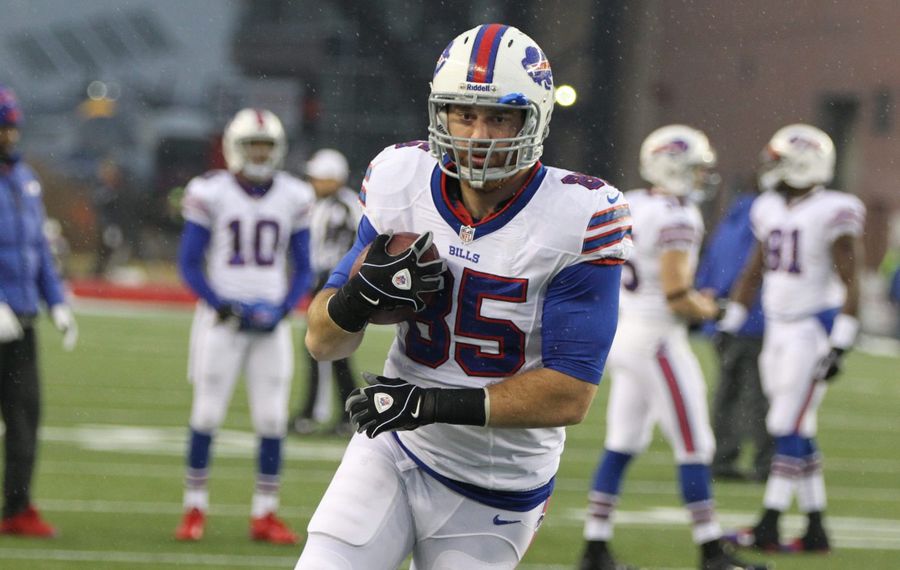 Lee Smith feels back at home.

The Buffalo Bills’ new tight end has returned to the team he spent the first four years of his NFL career with, signing Monday as a free agent after four years with the Oakland Raiders.

“There's so many great things going on here, from the way the Pegulas have transformed this whole organization and this building,” Smith said Wednesday after taking part in the team’s offseason conditioning program. “Just the feel when you walk into it, from the staff, to the players, to the coaches, to everybody in the building – the atmosphere and the mood is great to be a part of.

“I had a great four years here to start my career. I was very blessed to stay healthy and be around some great coaches. Had a little bit of success here to get things started, and then everything kind of picked up as I went to Oakland.”

Smith left the Bills to sign a three-year, $9 million contract with the Raiders in 2015. He signed another three-year deal after that contract expired after the 2017 season. But he played just one season of his new deal before being released in May. Over four years in Oakland, Smith played in 51 games (making 32 starts), finishing with 36 catches for 248 yards and four touchdowns.

“Definitely enjoyed my ride there,” Smith said. “Made a lot of memories, made a lot of great friends, learned a lot about ball and was able to get a little bit of a different experience, to get out there to the West Coast and play for a different organization. Then to come back here, what I consider home, has just been great for me professionally and personally.”

Smith signed a similar three-year contract that is worth up to $9 million to return to the Bills. The deal indicates the team sees him playing an important role in 2019.

“My role has been what it's been my whole career. I don't think I'm going to reinvent the wheel as a player at this point in my career,” Smith said. “I'm going to give Brian Daboll, Rob Boras, Sean McDermott and Brandon Beane – everybody in this organization – anything and everything I have. I guess what my role will be would be a question for my bosses, not me, but I've got a good feeling that my role will continue to be what it's been my whole career.”

History suggests that’s primarily as a blocker. Smith ranked seventh among tight ends in the analytics website Pro Football Focus’ positional grading last year. That included a run-blocking grade of 70.9 that ranked 17th overall. In 61 pass-blocking snaps, he was charged with allowing one sack and two quarterback hurries. Smith was used more by the Raiders as a run blocker, playing 176 snaps in that role in 2018.

Smith is one of five tight ends acquired by the Bills this offseason, joining fellow free-agent addition Tyler Kroft, draft picks Dawson Knox (third round) and Tommy Sweeney (seventh round) and rookie tryout player Moral Stephens. They are joined by holdover Jason Croom on the 90-man roster.

“Tyler's the bell cow, Croom's coming along and we've got a great young room,” Smith said. “I'll just go in there and do what I've been good at for a long time, and give these guys everything I have. To pinpoint my role, that's not my job. My job is just to come to work every day and do what they ask me to do. Whatever they feel like my role needs to be or whenever they feel like I need to be on the field, then that will be that.”

While the roster has changed drastically since Smith was last here, there are still plenty of familiar faces around One Bills Drive. He mentioned during his interview Wednesday that he was catching up with equipment manager Jeff Mazurek at the time.

Those around the Bills, both inside and outside the organization, have been thrilled to see him return to Western New York. During his first stint with the team, Smith established himself as one of most active participants in community activities. He was particularly involved with former Bills punter Brian Moorman’s P.U.N.T. Fund.

“My two main things have always been the military and children who are going through things they obviously didn't sign up for and quite frankly they don't deserve, along with their families,” Smith said. “I have four healthy babies who get out of bed every morning with a smile on their face, with zero pain and zero fear of the hardships in life. I imagine watching my babies go through that, and it breaks my heart to see any child in a situation they don't deserve.”

Not counting undrafted rookies and reserve/future signings, Smith is the 19th unrestricted free agent signed by the Bills this offseason (one of them, tight end Jake Fisher, was released when Smith was signed).

“It's just nice to know from the top down the main goal is to make the Buffalo Bills a better football team every step of the way,” he said. “When you have a young quarterback who isn't beating up the checkbook too bad at the moment, it allows you to go out and get players and be active, and that's exciting.”