That was the message passed from Ezra Castro, who died Tuesday in his native Texas after a battle with cancer, to former Buffalo TV reporter Jonah Javad, now working in Dallas, Texas. Javad shared the wish on Twitter, and the Bills Mafia responded with more than 700 retweets and - more importantly - a call to action.

Bills Mafia founder Del Reid and Javad agreed to reach out to the Teacher's Desk, which distributes roughly $6 million in school supplies annually to teachers who oversee students with low incomes, challenged by disabilities or with immigrant or refugee backgrounds. The classrooms do not incur a cost for the materials.

"Ezra often talked about how the city of Buffalo gave so much to him and how grateful he was at how [the city] always embraced him," Reid said. "Now, through the generosity of his fellow fans honoring his last wishes, he's able to give back and make a lasting impact."

"It's such an honor to be a part of this," John Mika, director of the Teacher's Desk, said. "It's amazing how generous Western New Yorkers are."

To honor Pancho's life, the process is simple: Visit the Teacher's Desk donation page, choose an amount and select #PanchosPack at checkout.

Since the endeavor began around 4:30 p.m. Wednesday, the response has been overwhelming. More than $47,000, courtesy of 1,725 donors, has been received by early Thursday afternoon, which means at least 4,700 kids and counting - in both the Buffalo area and Castro's roots in El Paso, Texas - will receive a backpack with a Pancho Billa logo and $100 worth of school supplies inside.

A three-ring binder, 20 No. 2 pencils, pens, markers, a coloring book, a hygiene kit, scissors, a mini dry-erase board and a stress ball - in the shape of a football, Mika hopes - and more accompany the backpack; Reid tweeted out the full list. Most of the packing will be done in July and August, and as many as 260 schools feel the impact.

We’re going to make sure that EVERY backpack has a tag attached to it that makes sure every kid who receives it knows that this is a GIFT from the one and only PANCHO BILLA.

The Teacher's Desk wrapped up its official shopping season last week, but Mika said he's thrilled to be involved in fulfilling Pancho's wish during his vacation, and precedent should make fulfilling the donations this summer realistic. The organization's A Good Start program, geared toward communities in Puerto Rico and around the world, resulted in 3,000 backpacks filled for students last year, so the tie-in was seamless with Pancho's more local cause.

Mika detailed the deluge of generosity from Bills fans and the Buffalo community, but also noting contributions from transplants all over the country. A die-hard Bills fan from West Virginia called Mika to say he's reached out to several other NFL teams to encourage their involvement, and four have already responded with interest.

"To be on the receiving end of this ... it's really a privilege to honor his memory," Mika said of Castro, whose generous spirit continues to change the world even after his death.

“I don’t want flowers at my funeral. I hate flowers. I want people to bring backpacks-for-kids filled with school supplies.”

Pancho Billa was well-known as a fan.

Ezra Castro was best-known as a kind, generous soul who saw the good in everything. 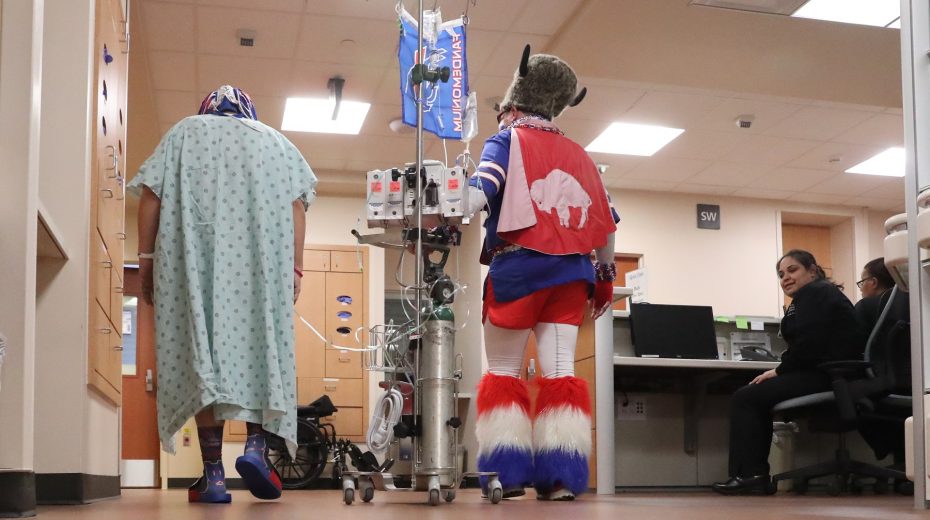