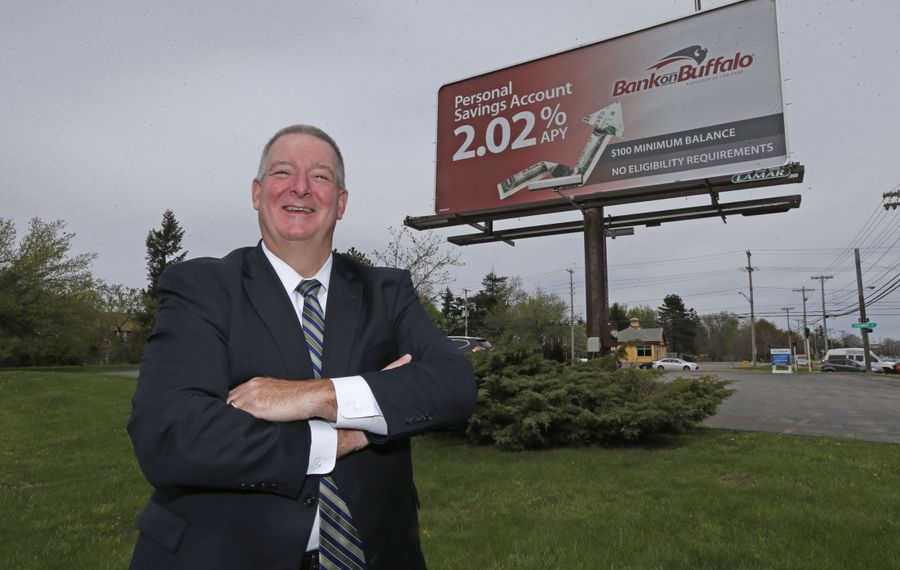 Bank on Buffalo has raked in $302 million in deposits from about 4,500 new accounts, since the bank began offering a 2.02% interest rate on savings accounts in February 2018.

It's been just about a year since the division of Pennsylvania-based CNB Financial ramped up its promotion of the rate – which is still among the highest in the country – on area billboards. The bank is putting up new billboards to remind customers the rate remains in effect, said Martin Griffith, Bank on Buffalo's president.

"This rate today is really more attractive relative to the marketplace than the day we brought it out," Griffith said. The additional deposits are supplying the bank with financial support for its growth in commercial lending, he said.

The $302 million stemming from the 2.02% rate accounted for nearly 74 percent of the bank's total $409 million in deposits, the bank said.

Bankrate.com on Thursday said the highest available rate in the nation was 2.25%, offered by Marcus, a Goldman Sachs digital product.

Griffith said the amount of deposits Bank on Buffalo has attracted with the rate is akin to opening another branch, without actually opening one. Bank on Buffalo has four area branches, and is building a permanent branch in Niagara Falls that will replace a temporary location in Wheatfield. A fifth branch, in Amherst, is still in the works.

Griffith said he anticipates the bank offering the 2.02% percent rate, which has a minimum balance requirement of $100, at least through the end of the year.

"A lot of folks wondered if this was some type of a teaser rate or teaser program for us," he said. "We want to remind them that that's not the case."