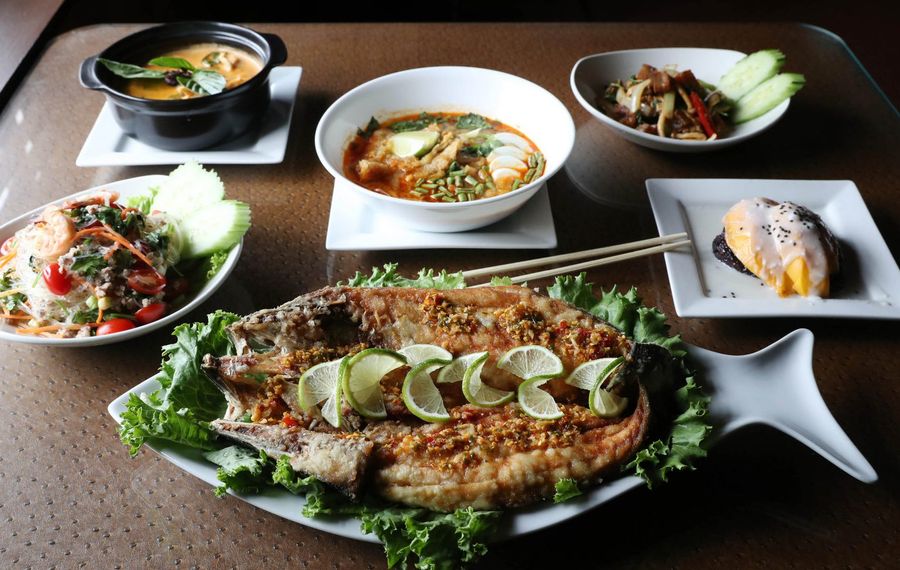 Buffalo is known for three things: snow, sports teams that are 0-for-eternity championship-wise, and chicken wings.

Could Buffalo pizza make it four? The Wall Street Journal recently published a front-page article on the spreading popularity of cup-and-char pepperoni, a sign that another one of Buffalo’s culinary specialties has started to get the attention it deserves. Travelers and tourists usually know about beef on weck, and if they’ve read “The Last Fine Time,” they know to ask after a fish fry.

With 15 restaurants in the area serving Burmese cuisine, there’s lots of variations. If people only have one spot in their eating itinerary, I suggest they go to Riverside. There, among wings, pizza and weck, they can also find my favorite Burmese restaurant in Buffalo, Lin Restaurant. The consistency and fine points of Lin’s dishes set it ahead of the pack. 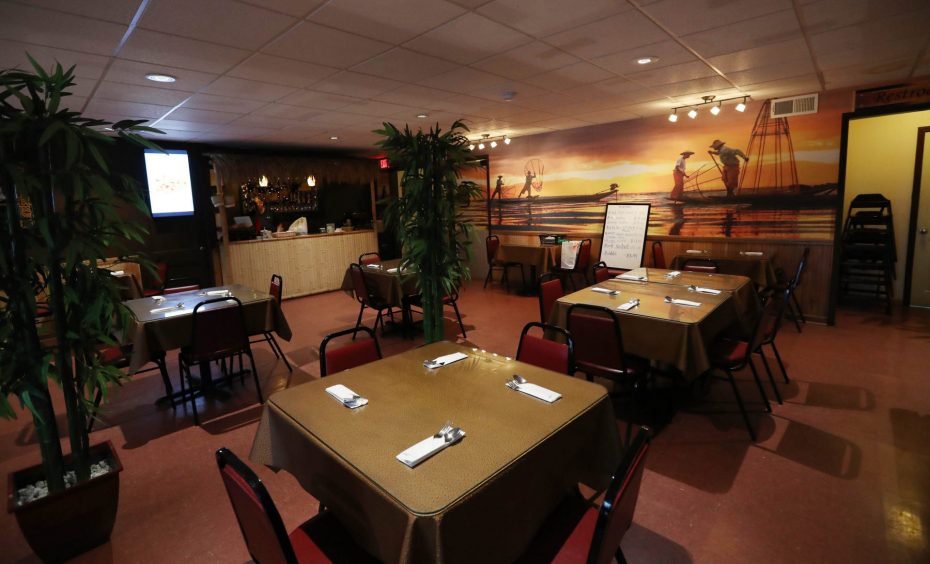 Khin Maung Soe and his wife, Thain Hla, opened the restaurant and a grocery next door in 2014, six years after arriving in the United States from a Thai refugee camp.

The 50-seat room is punctuated with stands of artificial bamboo and lined with color photograph wallpaper of soaring Burmese temples, fishermen at work, and the camp the owners left behind. After years without alcohol, it now offers wine and bottled beer. It is one of the most serene restaurants in Buffalo, partly due to acoustics, and partly because it never seems to fill up.

[Related: Love Burmese food? Look back at our guide for Buffalo's Burmese restaurants]

Tucking into dishes like Lin’s papaya salad ($8), I couldn’t help but wonder why. Freshly matchsticked under-ripe papaya, with the crunch and tang of green apple but not the sweetness, is tossed with peanuts, grape tomatoes, shredded carrot, snappy green-bean-like long beans, and thinly sliced golfball-sized eggplants for a vibrant salad fired with chile and tangy lime and fish sauce dressing. 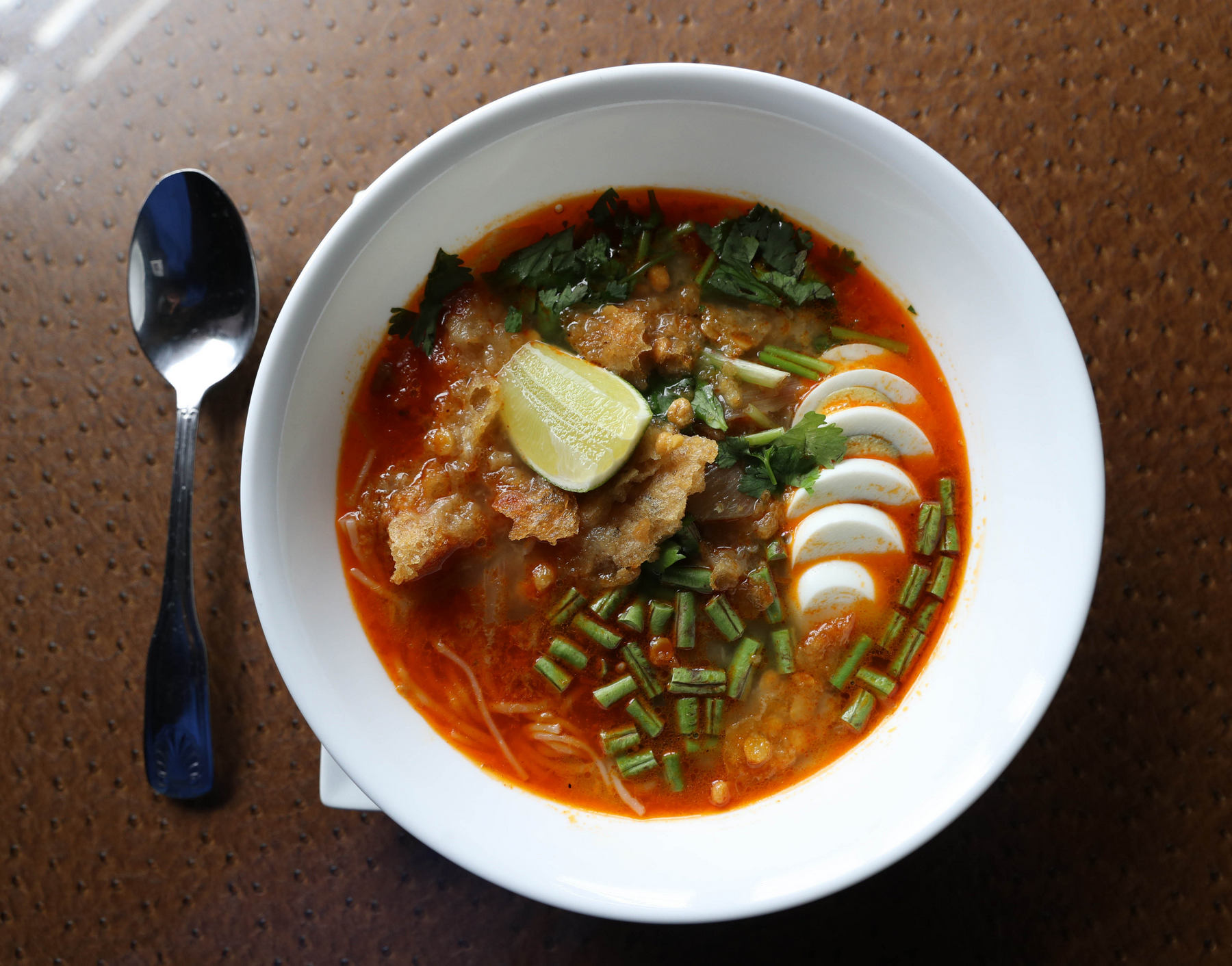 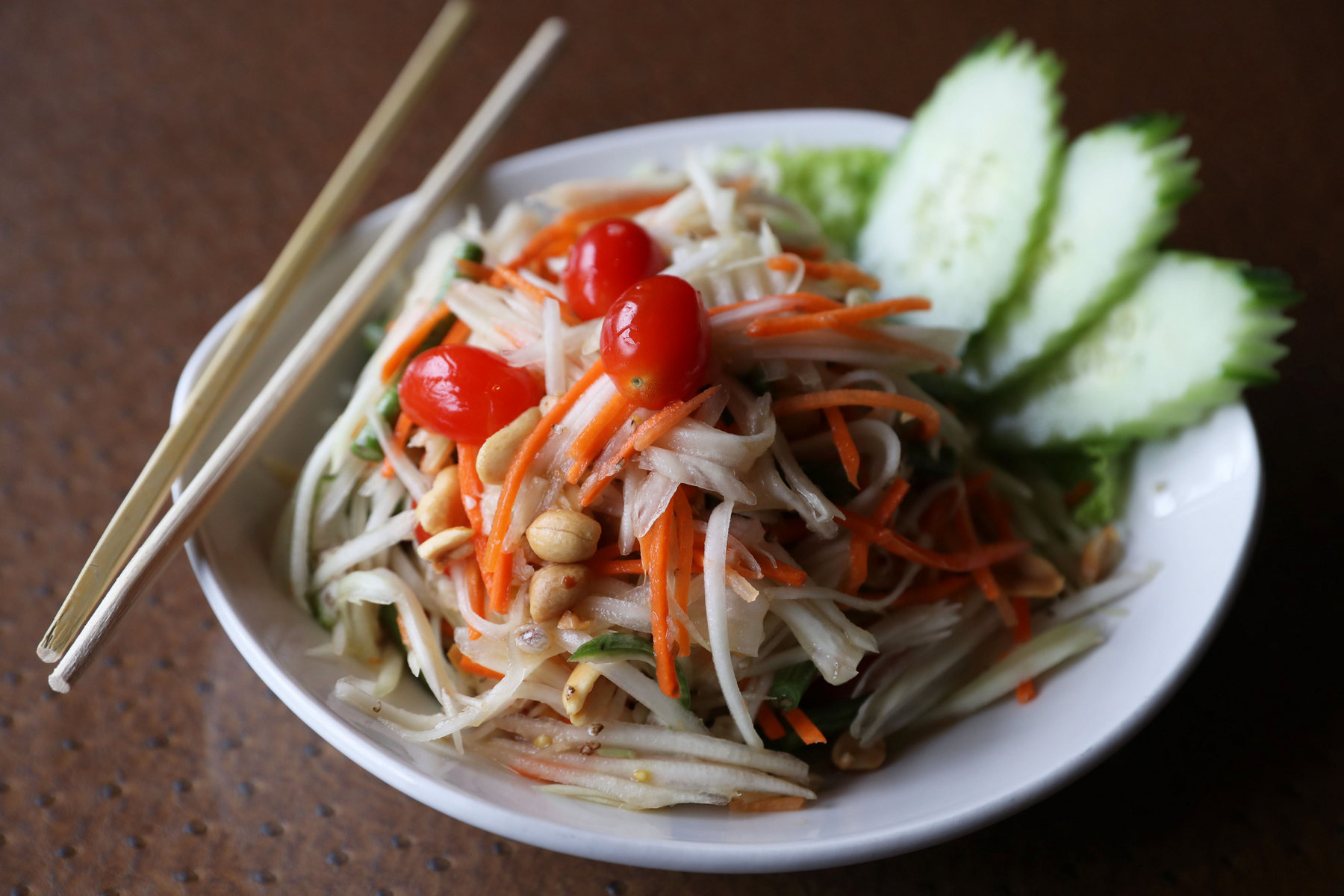 Tea leaf salad ($7), which uses tea leaves that have been fermented instead of dried as a sauerkraut-like green, is a scrumptious crunchfest. It is juicy with tomato chunks, savory with garlic oil, tangy with lime, and loaded with peanuts and fried beans that make it the noisiest salad you’ll ever eat. Substitute paper-thin raw ginger root for the tea leaves, and you have refreshing ginger salad ($7), a ginger fan's dream dish.

Biryani chicken ($10) is Indian-scented basmati rice pilaf enriched with fried onions and cashews, alongside a piece of chicken, braised in the characteristic dark, dank Burmese masala of caramelized shallot and ginger. 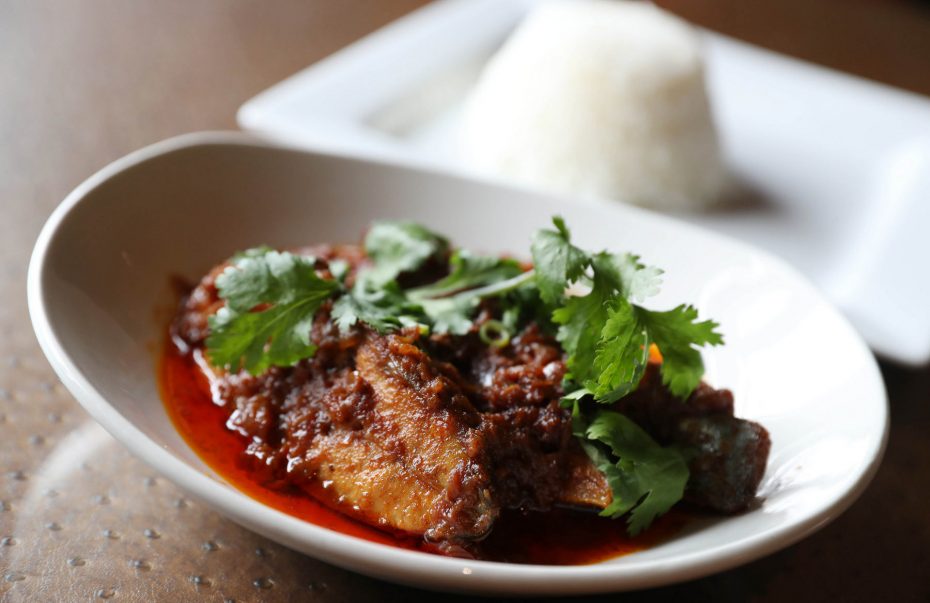 A whole sea bass ($23), laid open head to tail and mostly deboned, is simply seasoned, floured and fried to a crisp. It can be had Thai style, topped with a sweet-and-sour mixture of pineapple chunks and bell peppers. My money is on the Burmese version, with sour, funky Burmese lime-chile sauce, lit with chile but full with flavor, so that when beads of sweat appear it’s like applause.

When much of the local Thai on offer has been toned down for nervous Americans, Lin’s versions are lighter, sharper and livelier than most. 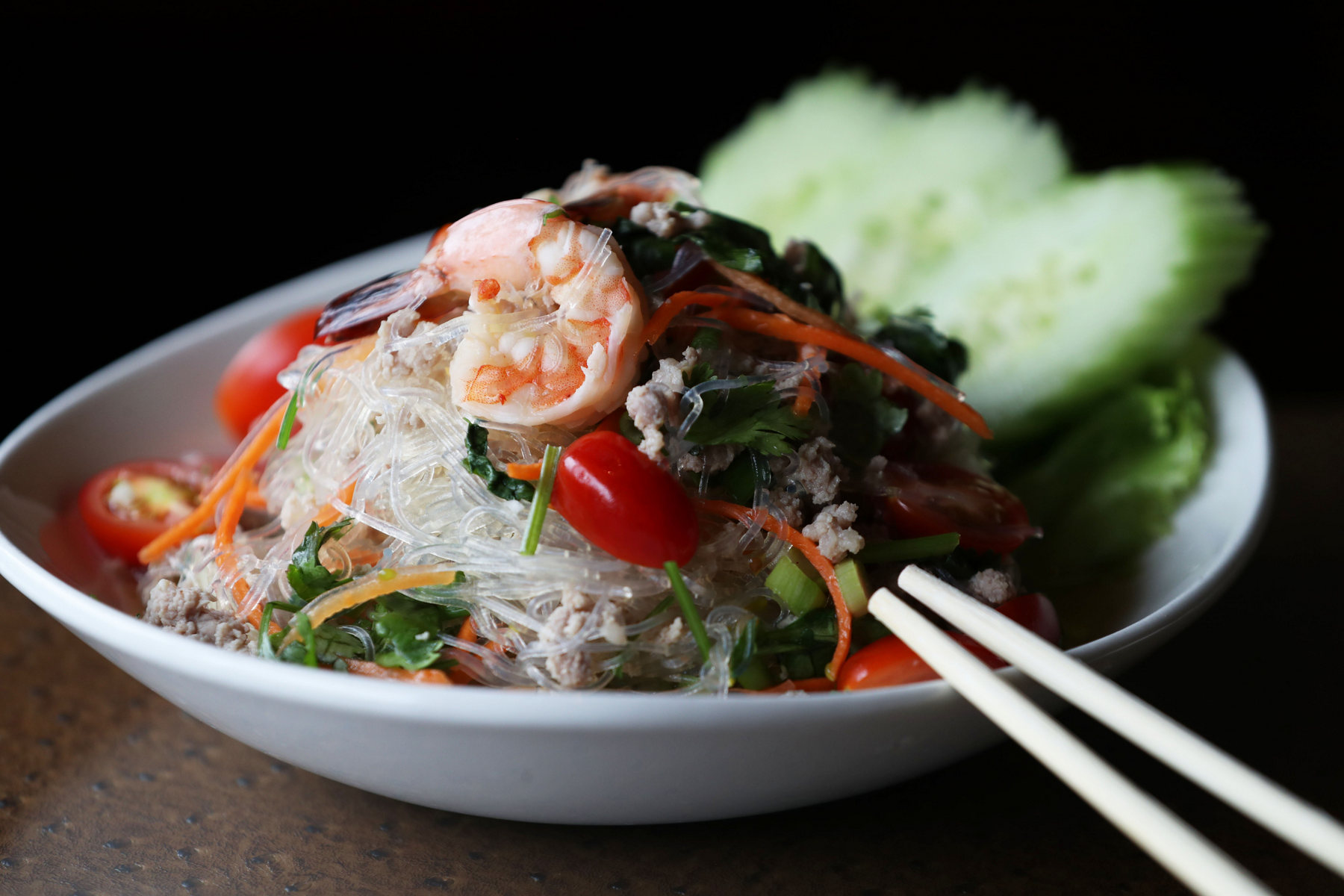 Pattaya fried rice ($11) was smoky from the wok, studded with peas, onions and leafy Chinese broccoli, wrapped neatly in an omelet and served with a squiggle of sriracha chile sauce. 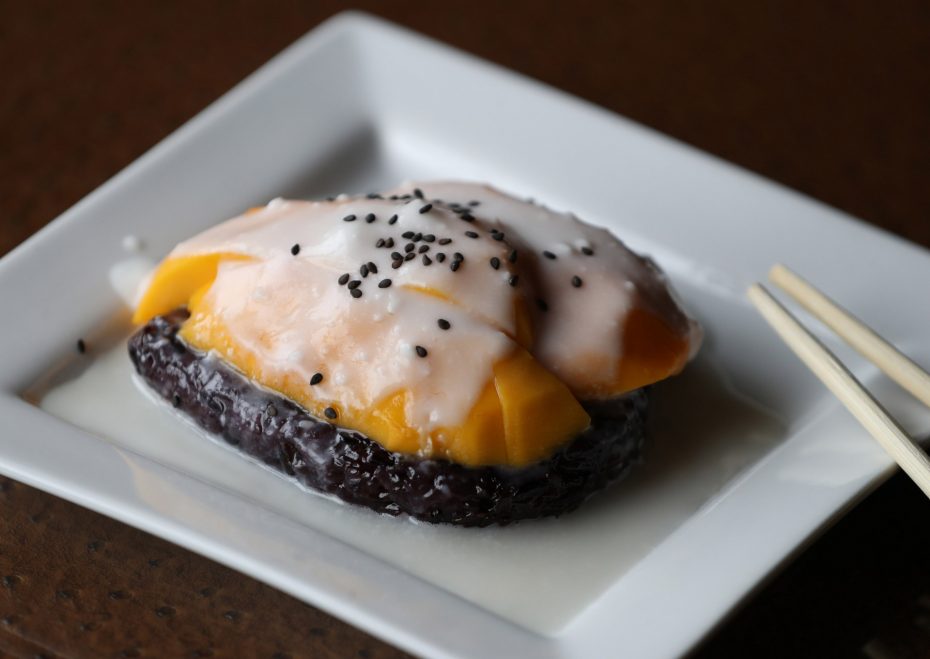 A recent Lin dinner ended with an exclamation point of a dessert. Mango sticky rice ($5) is a deceptively simple combination: warm rice, fresh mango and coconut cream sprinkled with sesame seeds. When the mango is fully ripe, it’s a transporting combination. Many other Burmese places will serve crunchy, immature mango. At Lin, it’s been perfect, or they’re out.

I’ve been telling visitors for years that Buffalo is not a town where you should waste a meal on chain restaurants when there is so much local flavor. So if you’ve punched the wing and weck spots on your dance card, consider dallying with Buffalo’s newest specialty, and take Lin for a spin. 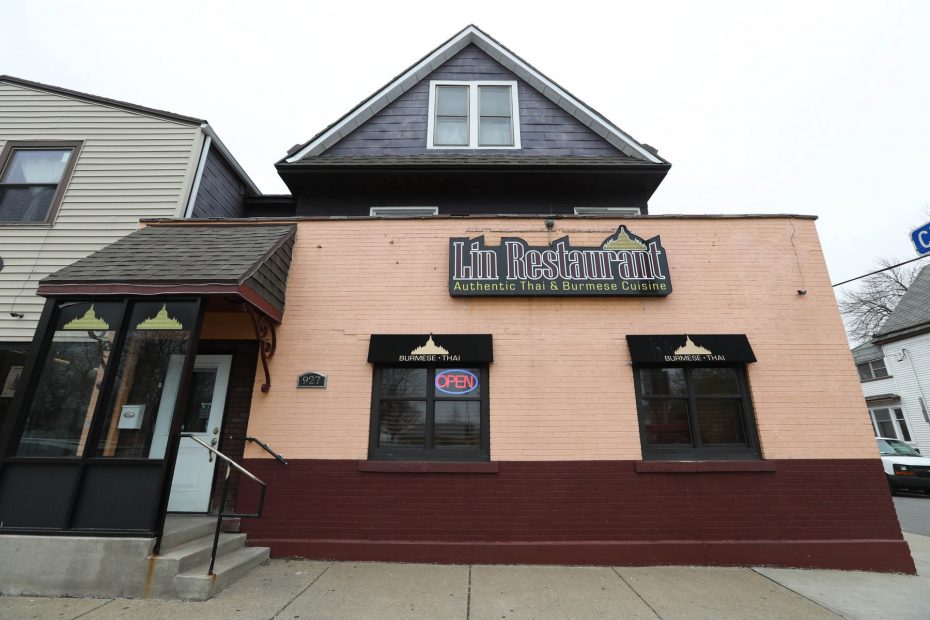 Lin Restaurant is located at 927 Tonawanda St., across the street from Riverside Park. (Sharon Cantillon/Buffalo News)