The plan was to kick off the state's annual seat belt awareness campaign Tuesday with an event at West Seneca East High School.

But on Sunday, hours after a West Seneca teen was killed and five others narrowly escaped death following a fiery car crash, it seemed prudent to consider postponing the event.

Mark J.F. Schroeder, acting commissioner of the State Department of Motor Vehicles, was glad that didn't happen and that a couple of hundred students were on hand to listen to speakers talk about the importance of being safe when they are in a car.

"It's a timely conversation and that's why we're here," he said Tuesday.

It seems to be a timely conversation at this time of every year, when excitement about proms and graduation ceremonies becomes muted by the news that a young life has been lost in a motor vehicle crash.

“It’s one of the greatest fears you have with kids,” Niagara Falls School Superintendent Mark R. Laurrie said.

The latest happened early Sunday in West Seneca, when 17-year-old South Park High School senior Tyler Wackowski of Sloan was killed when his car rolled over and caught fire. Three West Seneca East students, one West Seneca West student and a West Seneca West graduate survived the wreck at the intersection of Langner and Fisher roads.

Three of the passengers told police they were not wearing seat belts. Damage to the car was too severe to immediately determine if Tyler had been wearing one. Investigators also believe that speed could have been a contributing factor to the accident. Police also said empty beer and liquor containers were found in the car and outside the car.

West Seneca is just the latest location to see the death of a young driver. You don't have to look far to find others.

In May 2005, a crash killed an 18-year-old Starpoint senior class co-president. An 18-year-old Iroquois High School senior died the following June days before graduation. It happened twice the following May, including when a Holland Central School junior died driving home from picking up his prom tuxedo.

The next month, five Fairport High School graduates were killed in a crash in Canandaigua.

Two more – a 17-year-old in Clarence and a 19-year-old Niagara Wheatfield High School senior in Lewiston – in May 2013.

Statistics verify that this is more than an occasional issue. Twenty-seven 17- and 18-year-olds died in April or May car crashes between 1994 and 2014 in Western New York, according to the U.S. Transportation Department's Fatality Analysis Reporting System. It's the latest federal data available.

The crashes claimed the lives of 21 young men and six young women. Drivers were twice as likely to be killed than passengers. Only three of the crashes did not involve a collision or striking an object. Most were not rollover crashes.

The crashes were almost evenly split between rural and urban areas. But only three of the crashes happened on highways. Most of the rest were on local roads, arterials or collectors. Most of the dead were not ejected. And most of the vehicles were older models. Thirteen of 23 vehicles identified in the data were at least eight years old, and nine were more than 10 years old. Five of the vehicles were new or a year old.

Of the 27 who died in the eight counties of Western New York, 14 died in Erie County and six died in Niagara County.

With the most recent death very much on students' minds Tuesday, some speakers clearly made an impression on the students gathered in the school's auditorium.

"They ... were ... listening," Schroeder said, emphasizing each word. "I’ve been in school auditoriums before, and a lot of time, the kids are distracted. ... They weren’t distracted today."

The speaker who seemed to have the greatest impact was Shannon E. Filbert, a West Seneca town justice and a West Seneca East graduate. She delivered her speech from a lowered microphone, next to the podium, to accommodate her wheelchair. 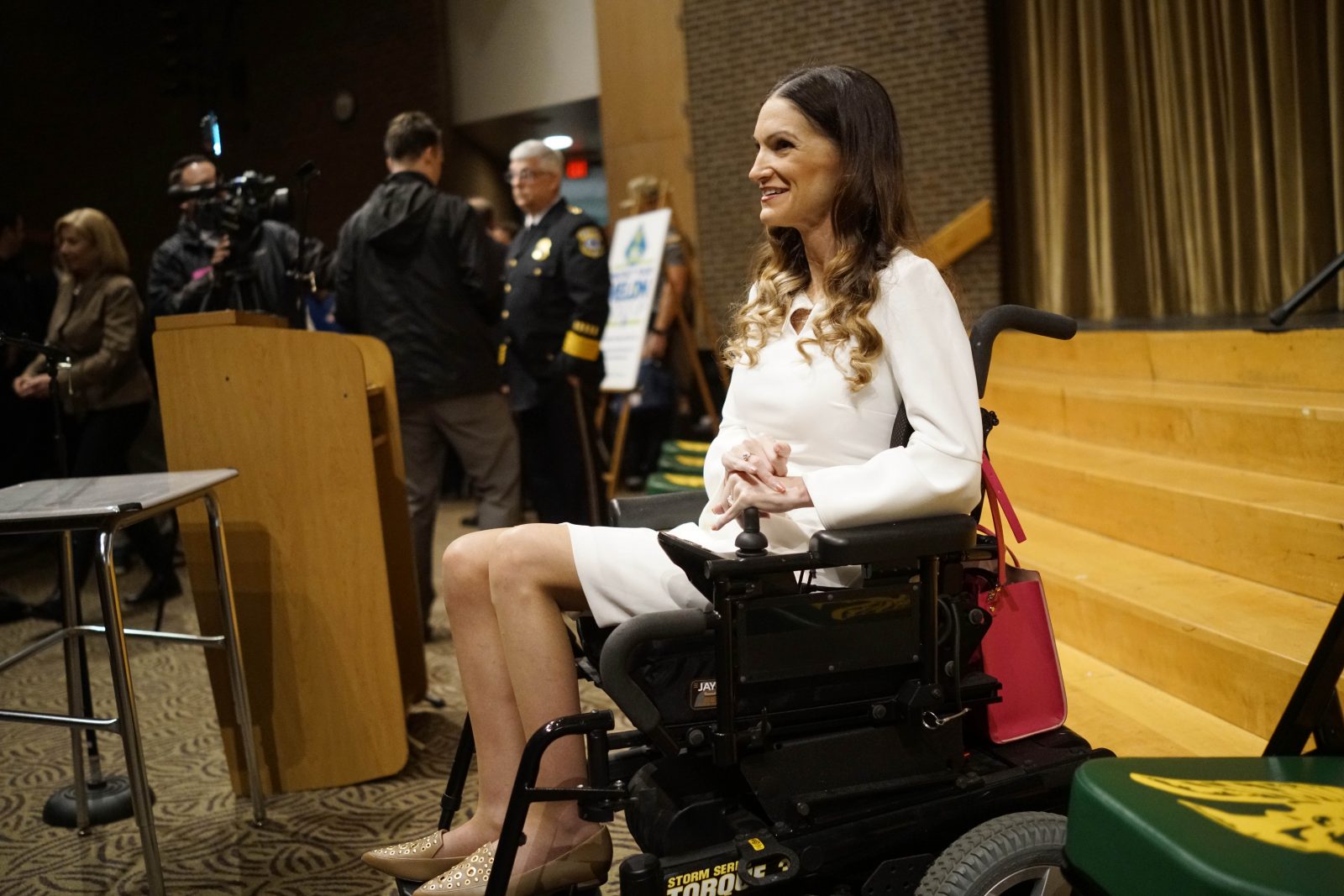 West Seneca Town Justice Shannon Filbert shared the dramatic story of how she was seriously injured in a car accident at age 16. (Derek Gee/Buffalo News)

Filbert is a quadriplegic, the result of breaking her neck in a car accident in which she was not wearing a seat belt.

In a four-minute address, she spoke matter-of-factly about the decision she made as a 16-year-old junior in October 1998 and the effect it has had on her since.

"It's real," she said to the students. "It's real. We're not invincible. I wasn't and neither are you. It takes two seconds to put on your seat belt. ... I'm happy with my life, I'm not saying that I wasn't resilient, and I didn't fight, but for something so simple, I have to live every day thinking, 'What if' ... .' "

Filbert said she does not regularly give speeches like this.

"I was hesitant at first, when they asked me because it’s very personal – the guilt, the shame, the embarrassment. But this is my school. And maybe if I had heard this years ago, things could have been different," she said. "I hope that it sunk in. I mean, that’s all I can do. I spoke from the heart and I hope that they take something with it, and like I said, it takes two seconds.

"That’s what I tried to bring home to everybody: A two-second decision could save a life of what-ifs."

NASCAR driver Ross Chastain, a regular on the series second-tier Xfinity Series who won his first career NASCAR Trucks Series win Friday night in Kansas, addressed the students while wearing a fire suit with "Buckle Up New York" stitched on the front. Chastain and JD Motorsports are a partner with the Governor's Traffic Safety Council, with their "Protect Your Melon" campaign that encourages seat belt use.

"This hits close to home for all of y'all," said Chastain, a Florida native. "I can't imagine what you're going through. ... The world can be an ugly place, but if we all get up and hustle and try to make it a little bit better, you can make a difference." 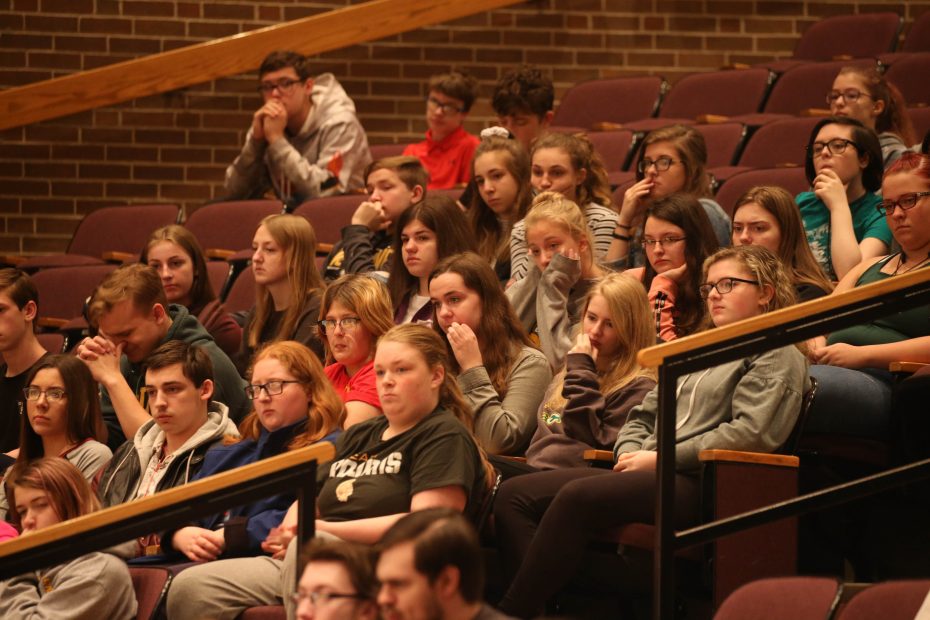 In Niagara Falls schools, students in some classes make public service announcements for the district’s student-run Our Schools Channel. Often times, the PSAs center around safe driving practices, like not drinking and driving or not texting and driving, Laurrie said.

The district also has helped put on programs with law enforcement and the Niagara Police Athletic League. The district’s post-prom party, which is in its 10th year this year, has become a draw for students and has been an incentive for them to stay safe, according to Laurrie.

But he acknowledges the education efforts tend to be more episodic, often centered around prom or Senior Class Day. Young people would likely benefit from more streamlined efforts, not just during certain parts of the year, the superintendent said.

“We’ve got to do it more yearlong and in a more organized fashion,” he said.

The graduated driver’s license system – from a junior permit to a junior license and then a full license – provides a phased-in approach for young drivers to obtain a full driver’s license, he said.

Drivers younger than 21 automatically have their licenses suspended if the register a blood alcohol level of at least 0.02%.

“Over the years, the state DMV has really clamped down on zero tolerance for drivers that are under 21,” he said.

The biggest hazard police see on the road are drivers using their cellphones, according to Foels, and it’s not just young drivers – it’s motorists of all ages.

Penalties for young drivers caught using their phones will driving are steeper, too. Offenders get a 120-day suspension of their license right off the bat, he said.

“The cellphone usage has really just gone through the roof,” he said.

The importance of reinforcing the the importance of safety while in a car and reminding young people about the deadly consequences they face made it an easy call for West Seneca Schools Superintendent Matthew Bystrak to go forward with Tuesday's event at West Seneca East.