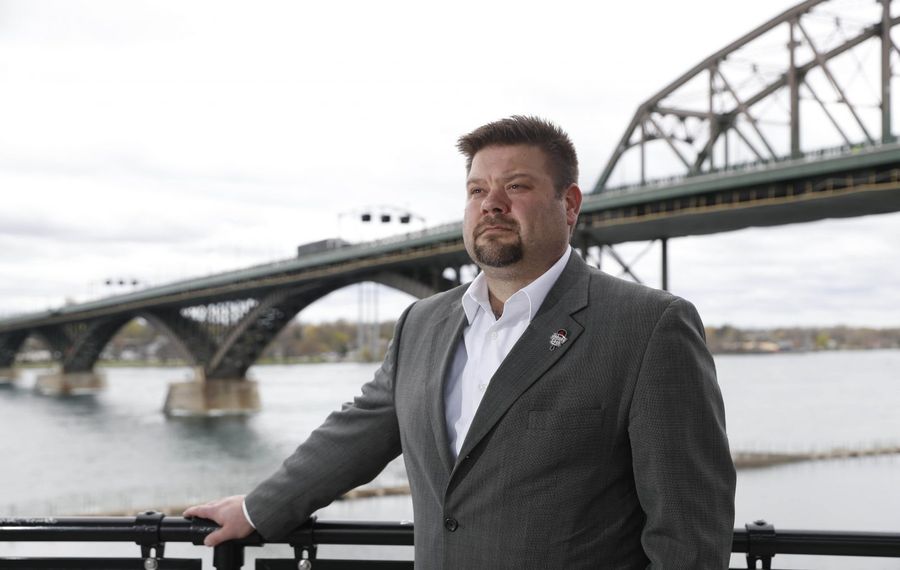 From the factories to the farms of Western New York, America's trade war with China is already starting to pile up damage.

Tariffs are leaving some local businesses wounded, and those wounds will soon be multiplied along with the increased tariffs on imported Chinese goods and the retaliatory levies that China will charge in response.

But, as in all wars, the mercenary bottom-line question is: Will the damage be worth the spoils of victory?

To hear local businesspeople tell it, there's no easy answer to that question, just because there's no guarantee that the war will even end in victory.

Still, some executives and local members of Congress of both parties say they're glad that the U.S. and China are finally battling it out. China deserves just punishment, they say, for decades of acting as a trade scofflaw.

The pain U.S. companies and farmers feel now will be worth enduring, they say, if it stops China from manipulating its currency and allowing its companies to steal American ideas.

"The escalation of tariffs is something that can be easily resolved by China coming to the table and negotiating in good faith an updated trade relationship that allows us to have an even playing field with China going forward," said Rep. Tom Reed, a Corning Republican who represents much of the Southern Tier.

Trade with China and the current tariff war is as complicated as the world economy itself.

Damon Piatek can attest to that. He is co-owner of Welke Customs Brokers USA in the City of Tonawanda. He helps local companies navigate the complicated landscape of international trade and helps them understand its many speed bumps, including tariffs.

A tariff is a tax that a country charges on imports. President Trump, frustrated over decades of trade troubles with China, imposed a 10% tariff on many imported Chinese goods in September.

But Trump increased those tariffs to 25% last week, and Piatek already sees it having an impact on local companies – especially those that rely on China for parts or materials that suddenly cost a lot more.

Already one local company, which Piatek declined to name, closed its Ohio facility.

Those are just the sorts of impacts that two big locally based companies – New Era Cap Co. and Fisher-Price – warned about in letters to the Trump administration last fall.

Both companies design products in America that are made in China, and said their American operations would suffer if the price of their Chinese-made products went up by 25%. Both said consumers would suffer, too, with higher prices for any product made in China.

The story is different for some companies that have relied on Chinese companies for parts for American-made products. Piatek noted that one of his clients simply stopped buying products from China and instead found a parts supplier in Pakistan. And in some circumstances, companies are turning once again to American suppliers.

"Some of our clients are getting additional business because some of it's being on-shored," he said. 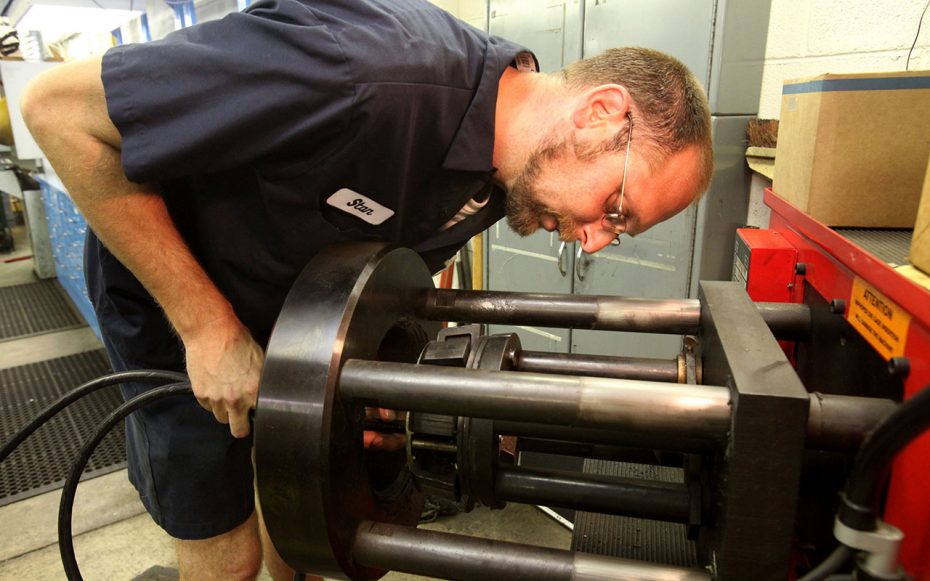 Manufacturers with a strong two-way trade relationship with China, as well as farmers, are suffering the most from Trump's tariffs.

Power Drives, a Buffalo-based manufacturer that employs about 100 locally, relies on Chinese components for its U.S.-made hydraulic and locomotive products – so the company got slapped with Trump's tariffs on Chinese imports. At the same time, the company sells its products in China, so it has to pay China's retaliatory tariffs, too.

"We get hit both ways," said Lou Panzica, Power Drives' president and CEO. "It's affected our business. It's cost us money, certainly."

Panzica said his company hopes to reduce the impact of the tariffs by importing parts through a free-trade zone.

No such strategy would help Western New York farmers who rely on sales to China for a major source of their income. That's the case for the region's growing number of soybean farms.

Trump tried to ease the blow for soybean farmers with an $11 billion payout program that the president now wants to expand. But that's not nearly enough to compensate farmers for the business they are losing, said Dean Norton, director of public policy at the New York Corn and Soybean Growers Association.

"It's a direct hit on consumers," he said regarding the tariffs. 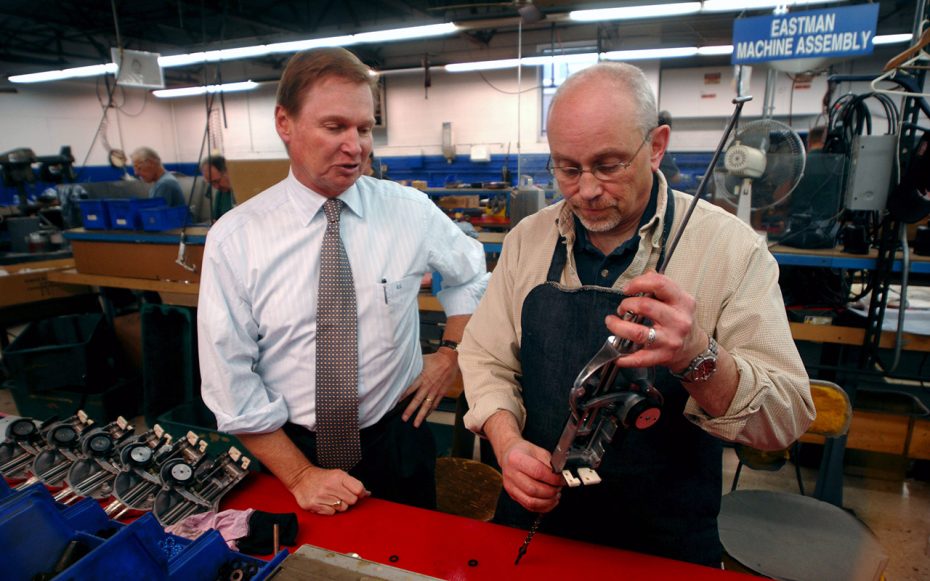 Robert Stevenson, left, president and CEO of Eastman Machine, with an employee in a 2009 photo. (Doug Benz/New York Times)

President Trump threw the monkey wrench of tariffs into the U.S.-China trade relationship for a reason. Ever since it entered the World Trade Organization nearly two decades ago, China has refused to play by the world's rules.

Robert L. Stevenson, president and CEO of Eastman Machine Co. of Buffalo, told a congressional committee all about it in 2005, when he recounted how Chinese manufacturers stole the design of the company's products and marketed them as "Westman" machines.

Fourteen years later, Stevenson said he would say the same thing – because nothing has changed. For that reason, he's glad a U.S. president is finally challenging China's business practices.

"I think it's something that needs to be done and that needed to be done," Stevenson said. "Unfortunately, it should have been done years ago."

Trump has long been calling for a tougher trade stance against China – as have lawmakers such as Rep. Chris Collins, a Clarence Republican.

“When it comes to China, business as usual is not an option," Collins said in a statement. "For decades, our politicians have allowed China to steal our intellectual property and flood our economy with cheap goods while protecting their own markets. President Trump has rightly made changing the trading relationship between our two countries one of his top priorities.”

That's something Senate Minority Leader Charles E. Schumer, a New York Democrat, has tried to do for years. Schumer has confronted China again and again over its tendency to manipulate the value of its currency to benefit Chinese companies over their worldwide competitors.

That being the case, Schumer – usually one of Trump's sternest political rivals – stands behind the president on the tariff issue.

"Hang tough on China, President @realDonaldTrump," Schumer tweeted last week. "Don’t back down. Strength is the only way to win with China."