Before the public address announcer could finish his sentence congratulating the team that won the regular-season and playoff championship, the Mount St. Mary senior already had grabbed both plaques to spark a lengthy, jubilant celebration.

That’s OK. That was the only time she was off her game, which was good news for the Thunder and bad news for Sacred Heart.

The Mount completed its season-long mission of redemption. Behind Garlow’s seven goals and 12-point game, Mount St. Mary ended the Sharks’ championship reign, 16-12, before an estimated 600 fans on a frigid spring night. Emma Telesco and Lauren Mucica each scored three goals for the Thunder (12-6), who won their first playoff title since 2017 and 11th overall.

Earning the right to represent the Western New York in the state tournament has been Mount’s goal since the start of preseason workouts. Redemption for losing 4-3 in last year’s final had been on the players minds since Sacred Heart’s coronation last year on the same field.

“There’s no words to describe how this feels,” Telesco said. “It’s awesome.”

“I can’t wipe the smile off my face,” said Garlow, the league’s player of the  year and playoff MVP. “We had everything going for us. It’s just an amazing feeling to be able to win this and now be able to go to states.”

A year after being held to just one goal in the biggest game of the year, Garlow tripled that output during the first half of Tuesday’s clash. But before she could get room to score goals herself, she played the role of facilitator. Facing double and triple teams, she calmly found open teammates – right on the doorstep of the Sharks cage for easy goals.

That enabled Mount to overcome early one-goal deficits before taking the lead for good. The Thunder broke a 3-3 tie on a long pass from Garlow to an open Mackenzie Badgley with 12 minutes, 20 seconds left in the first half.

That sparked an 8-3 blitz to close the half as the more veteran Thunder found the holes in Sacred Heart’s defense. That included Garlow making one more slick pass to Ava Tower for a one-on-one she cashed in on with 13.9 seconds left. 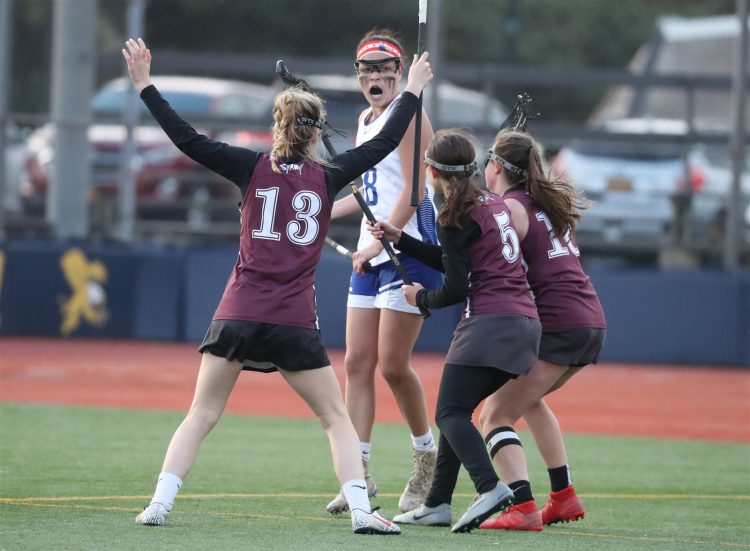 “When they were trying to double me, I think they thought I was the only person that could do anything,” Garlow said. “In fact everyone on my team is a contributor and can score goals. I don’t think they were ready for a team effort.”

“When things don’t start to go our way we kind of mentally get down and then we create a hole we need to dig ourselves out,” Sharks coach Christina Geschwender said. “The effort was there to dig ourselves out in the second half but we were too deep at that point.”

Freshman Isabella Judge scored six times for Sacred Heart, which only had four seniors on its roster.

That wasn't enough to slow down the Thunder.

Should Mount win Saturday, it then would play a still to be determined team Sunday for the state title.

Tuesday night, it was all about the redemption.

“It definitely hurt (last year). After what happened last year, this is better,” Mount coach Paige Printup said. “If we had to take that loss where we win it this year I’d take it every time. This is very rewarding for us to be the first to go to states. ... I think we’re going to be good when we go down there.”