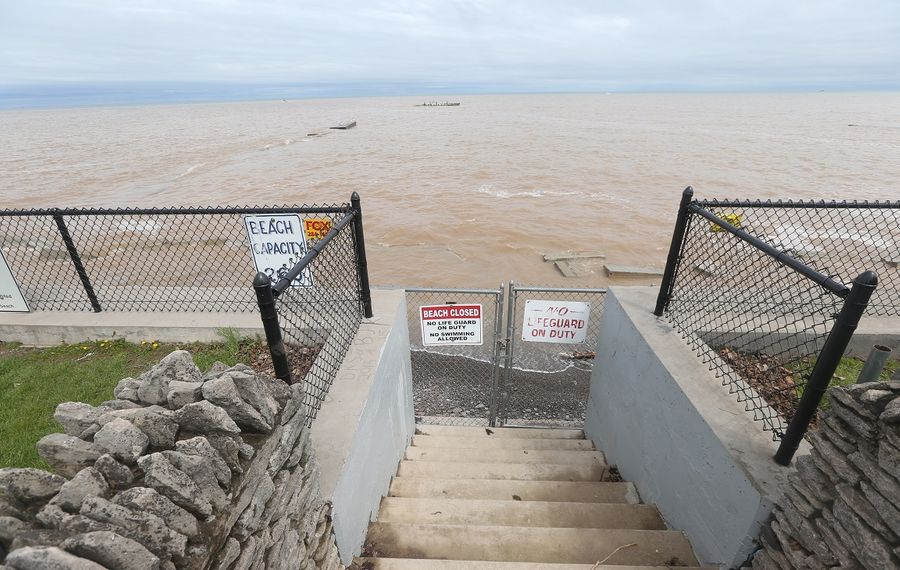 Newfane Supervisor Timothy R. Horanburg said Tuesday that he has canceled the beach season in Olcott, as he did in 2017, the last time Lake Ontario flooded.

Krull Park Beach was completely under water Monday, and water is forecast by the Army Corps of Engineers to rise another 7 inches by June 10.

"There's no beach there at all," Horanburg said. "We can't even get down to it. The access road we put in last year is taking a beating. We can't get equipment down there."

The lack of public swimming on the lakeshore comes as the latest blow to Olcott businesses that were hit hard in the wallet two years ago, and they now face the same plight again.

"This rose four inches since last night," he said Monday at his business, McDonough Marine, on the east side of Olcott Harbor.

"This is the second time in three years I haven't been able to rent 35 docks, so I've got a loss of $86,000 a year in dock rental," said Hedley, owner of Hedley Boat Co., a docking company. 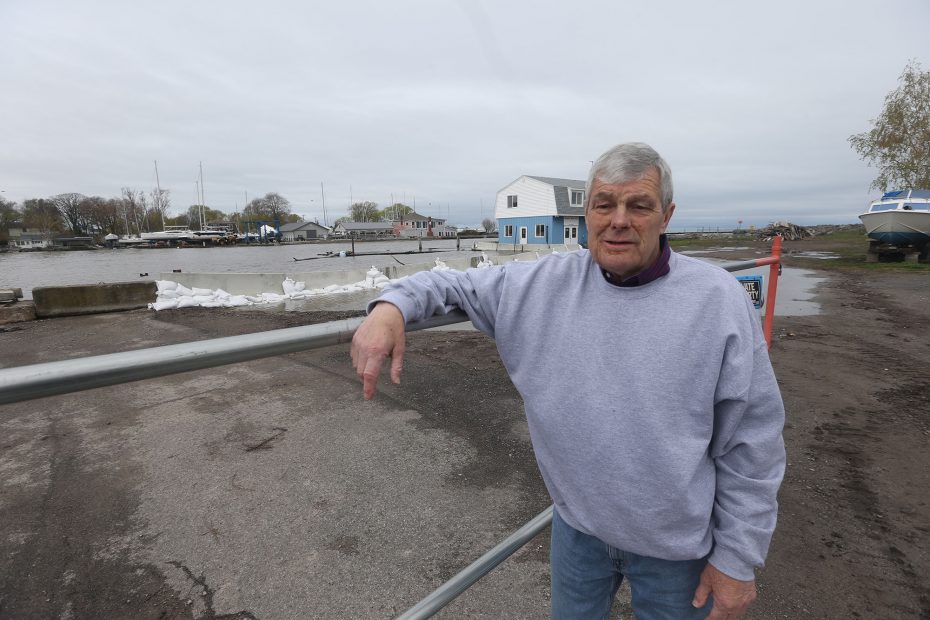 Newfane Supervisor Timothy R. Horanburg checks out water levels by the Hedley Boat Co. in Olcott which has a building and lot sandbagged. Lake Ontario is forecast by the Army Corps of Engineers to rise another seven inches by June 10.(John Hickey/Buffalo News)

A few inches of water already inside McDonough's building forced him to move an air conditioner and as much other equipment as he can. He's working on raising the floor of the building by almost a foot to resist the waves.

"Behind my docks, I've lost 10 or 12 feet (of land to erosion)," said, McDonough, 84, a lifelong Olcott resident. "You can see where the bank's dropped down another three feet. Some of it's going to slide in again."

McDonough also owns three houses along the lakeshore for seasonal rentals. The decks are being undermined by the lake. He has hired a contractor to try to protect them from the water.

"If the walls go, I'm 25 feet from the water," he said as he watched the waves crash ashore.

Evidence of heavy erosion is obvious, as muddy water extended some 500 feet from shore, submerging the beach at Krull Park and nearly reaching the federal piers at the mouth of Eighteen Mile Creek.

Hedley said he opted for concrete barriers and sandbags instead of the rubber aquadams offered by state emergency management officials.

"The problem with the aquadams is, they won't let the water drain out, so you've got to pump out from behind the aquadams," Hedley said. "Those things are 14 feet wide by four feet high. There's no way you could get it out."

Hedley said he asked for Jersey barriers, the portable concrete walls seen at road projects, instead of the rubber dams.

"They're not there to keep the water out. It's to stop the waves from getting up in here and pulling all the dirt and the rock and everything else out," said Hedley, who represents the fourth generation to own the family business.

He reserved his scorn for the International Joint Commission and its efforts to control the level of Lake Ontario "like it was a bathtub." 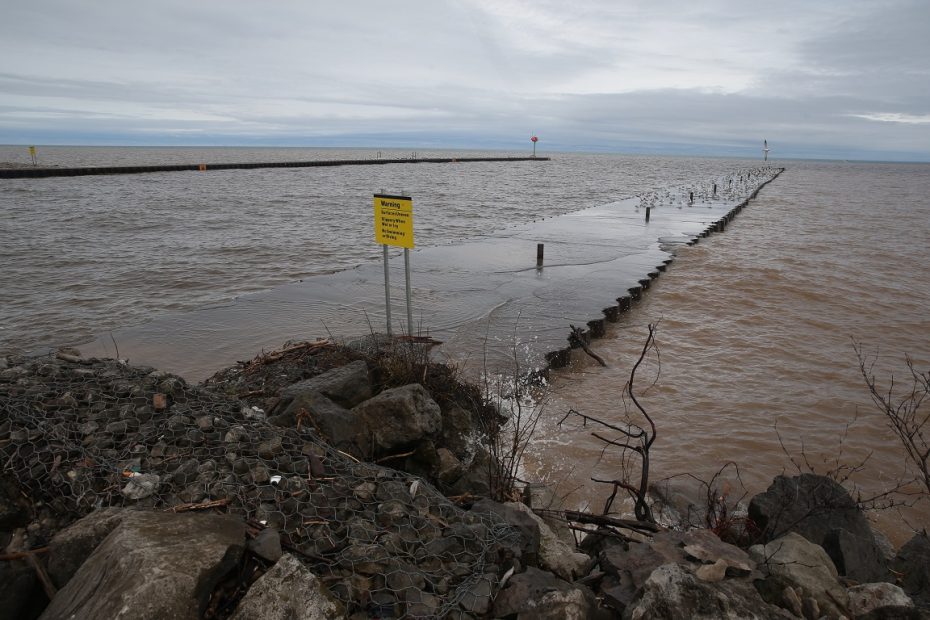 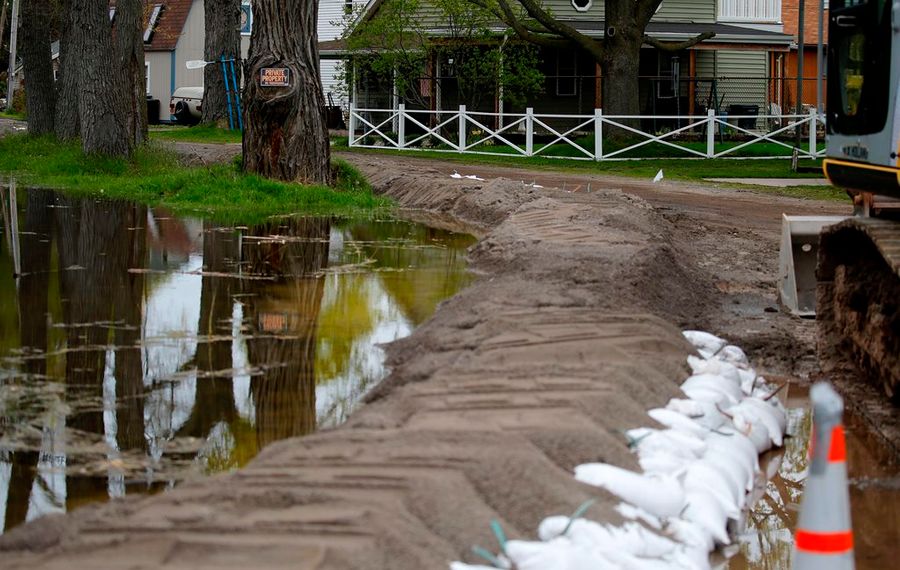 Yes, there's snow in the forecast
High lake levels batter Olcott at one end, Montreal on the other
Gallery: Stunning photos of Lake Ontario, Lake Erie, flooding
Crops threatened by too much rain

"The IJC, they're like kindergarteners. They're supposed to be educated people, right?" Hedley said. "They're stupid if you ask me. To do this two years out of three?"

The International Lake Ontario-St. Lawrence River Board, a subsidiary of the International Joint Commission, has adjusted the amount of water flowing out of the lake at its eastern end, at a dam from Massena to Cornwall, Ont.

The board has been moving the outflow rate up and down to try to balance the threat along Lake Ontario's New York shore with the flooding that has occurred east of the dam in the Ottawa and Montreal areas.

Meanwhile, a north wind continued to push water toward the sodden shore.

"It's getting ugly," said Horanburg, the Newfane town supervisor. "It's going to be worse than 2017."