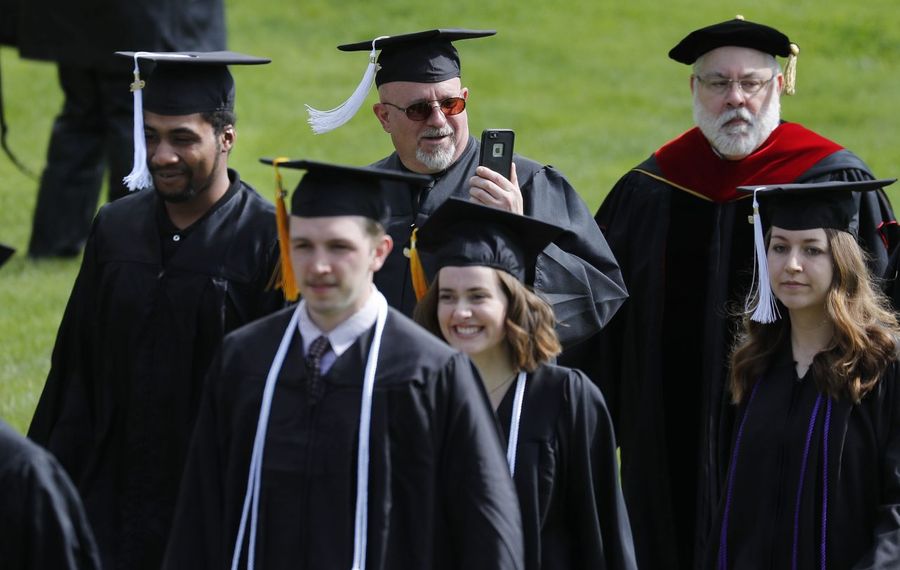 Bob Suda went to community college for nearly three semesters before he dropped out and later got three GEDs in three different prisons.

So he's familiar with learning, even though he dropped out of high school at 17.

Adonte Buster dropped out of high school, too, and picked up his GED at Cape Vincent Correctional Facility.

Saturday was the first time either man had walked across the stage at a commencement exercise.

Suda, 57, and Buster, 25, are the first Hope House graduating class. The program in Buffalo educates parolees through Houghton College and Peaceprints of Western New York, which offers comprehensive reentry services to men and women involved in the criminal justice system.

They were among 260 students graduating with associate, bachelor and postgraduate degrees at Houghton College Saturday. The graduates took a final march around the quad at the college campus, led by a bagpiper, then filed into Wesley Chapel for a two-hour ceremony.

And, at 11:35 a.m., the two men — in black caps and gowns — shook the hand of college president Shirley Mullen, as she handed them their degree cases.

Was he nervous? Suda was asked before the ceremony.

He shook his head.

"You get nervous before prison," he said. 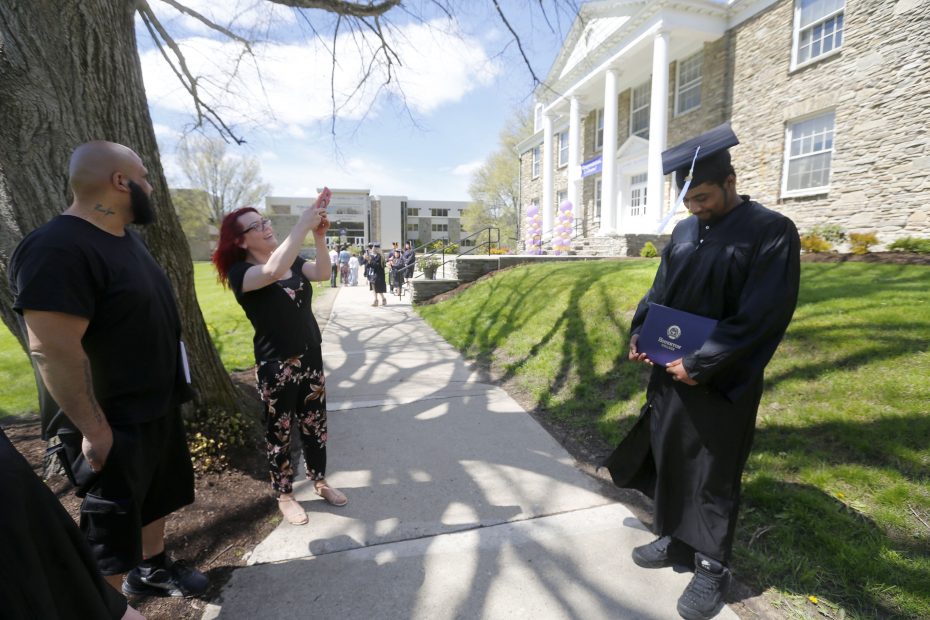 Adonte Buster had his photo taken by his girlfriend, Margaret White, and Roberto Santos after the Houghton College graduation on Saturday, May 11, 2019. (Mark Mulville/Buffalo News)

After graduation, Buster was congratulated by his girlfriend, Margaret White, and his brother, Roberto Santos.

"If you get out of prison and you graduate college, even with an associate degree, people are going to look at that as a positive thing, not a negative," Suda said.

Six parolees started the program in 2017, and Buster and Suda were the only ones to stick with it for two years to get their associate degrees Saturday at the Allegany County college. Most of the classes were at Hope House in Buffalo.

Students drop out for many reasons — from wanting a temporary job at Christmas to make money to buy presents for a child the first time after leaving prison, to having to work to pay child support, to losing food stamps after being enrolled in college to breaking parole and being sent to jail.

"We go into it knowing students are going to withdraw," said program director Rebekah Kimble.

"Thousands of times I wanted to give up on this," Buster said. "It's something that I wanted, but I didn’t think I was fit." 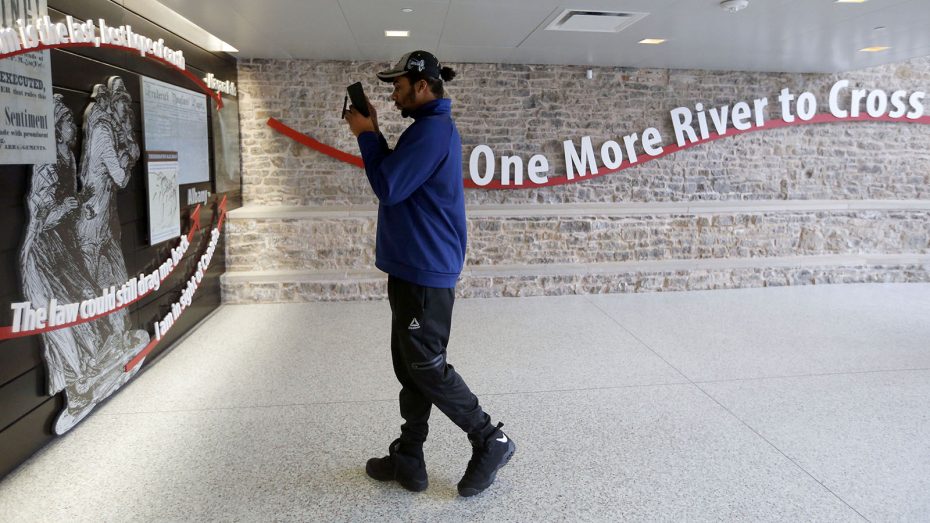 Adonte Buster snapped a photo during a class trip to the Niagara Falls Underground Railroad Heritage Center on Tuesday, May 7, 2019. (Mark Mulville/Buffalo News)

But interest is growing, as students are telling their friends about it and they are enrolling.

"I think we're figuring it out," Kimble said.

"It was a fluke that the program came about," said Cindi McEachon, executive director of Peaceprints.

She was looking for a room where a meeting she was attending was to be held, and went into the Symphony Circle Campus of Houghton College — where refugees and immigrants attend a similar program. She found out about the program, and thought it was a good model for those who have been released from prison.

"All that was racing through my mind was literally, this could be an open door for our clients," she said. "They’re going through multiple hoops when trying to enroll in college."

It costs $60,000 a year to incarcerate someone, and about $10,000 to educate them, Kimble said. Prisoners who participated in training and educational programs had a much better chance of staying out of prison, according to a study by the Rand Corp. 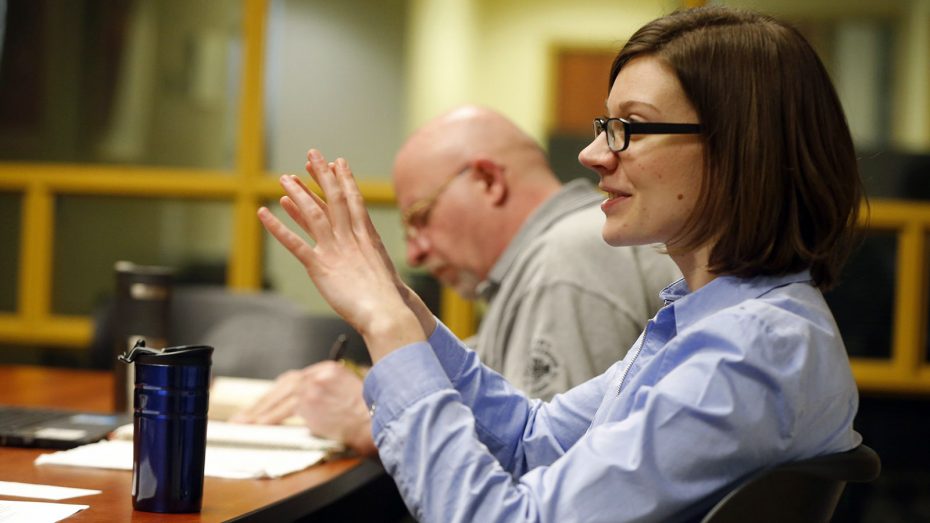 Most of the students coming out of prison qualify for federal Pell Grants for tuition and New York's Tuition Assistance Program. The goal is to incur no debt, since parolees could be at risk to default.

Inmates used to be able to use Pell Grants in prison to take college courses and obtain degrees. But in 1994, President Bill Clinton signed legislation to ban the practice. President Obama instituted the Second Chance Pell Grant program in 2016 as a pilot program to reintroduce the program at 141 correctional institutions.

Suda said he got his GED, or high school diploma, while serving time in jail in West Virginia. He had been convicted of DWI in New York, then left the state to see his girlfriend. He was picked up on a warrant on the New York charge in West Virginia, then let go, he said. In Iowa, he served a year and a half in state prison following a domestic violence charge. He got his third GED at Mid-State Correctional Facility in Oneida County, while serving eight months for the New York felony DWI conviction.

"Bible study and AA, that’s all I did in there," Suda said. "When you’re locked up, you've nothing else to do." 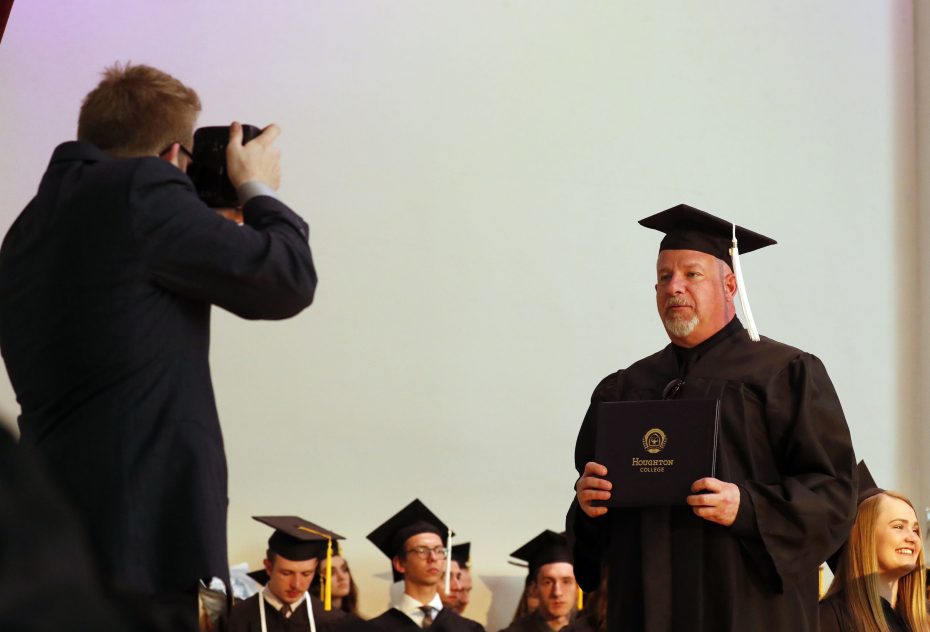 Bob Suda had his photo taken after he received his diploma during the Houghton College graduation ceremonies on Saturday, May 11, 2019. Suda is one of the first graduates of the Houghton at Hope House program for parolees. (Mark Mulville/Buffalo News)

He wishes he could have succeeded at college when he was younger. He said he "messed up" in his third semester at Ulster County Community College and dropped out.

"That would have changed my life. I would have a decent job," Suda said. "I was doing all kinds of crazy things back then."

He survived in prison by keeping away from bad influences.

"The things I've seen, I just do the opposite what they did. That's the best thing to do, that's my best advice for anybody going to prison," Suda said. "Learn stuff and read, and stay away from the crazy stuff."

He wasn't planning to attend the graduation ceremony, but decided to go.

"I wasn't going to go at first. I'm just too old, but what the hell? Everybody's going, so why not?" Suda said.

Buster was arrested for armed robbery nine years ago. He served four years in state prison, and when he violated a curfew while on parole, he was sent back to prison for two more years. When he was released he stayed at Bissonette House, a transitional residence program, where he learned about the Hope House campus of Houghton. 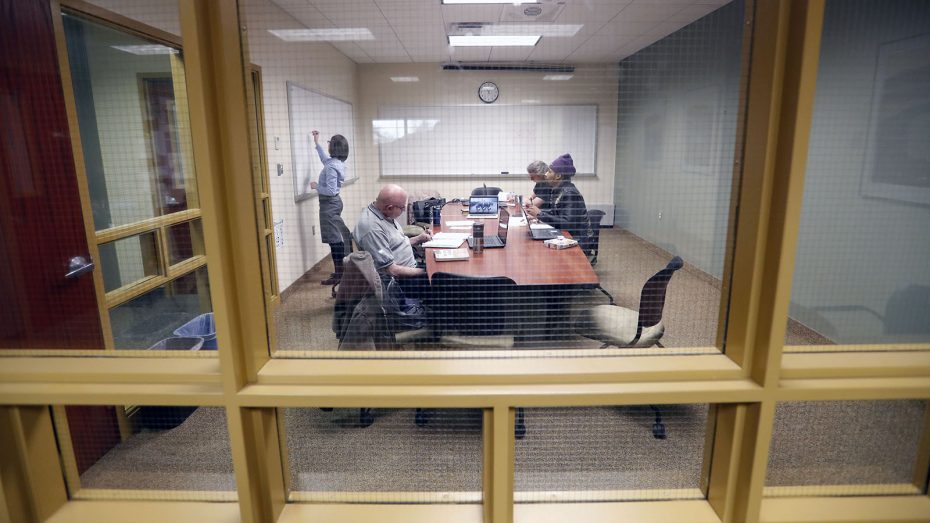 The Houghton program teaches more than academics — it exposes students to the college culture. And they are learning.

McEachon said Buster took a public speaking course his first semester, and he was terrified when he spoke in front of the small class. The next year, she invited him to speak at a Peaceprints annual dinner.

"He stood up in front of 170 people and blew them away. It was phenomenal to see that transformation," she said.

The goal is for students to pursue a bachelor's degree.

Houghton has an agreement with SUNY Buffalo State to accept the college credits. Buster wants to return to school in the fall for either criminal justice, law, accounting/management or nursing. 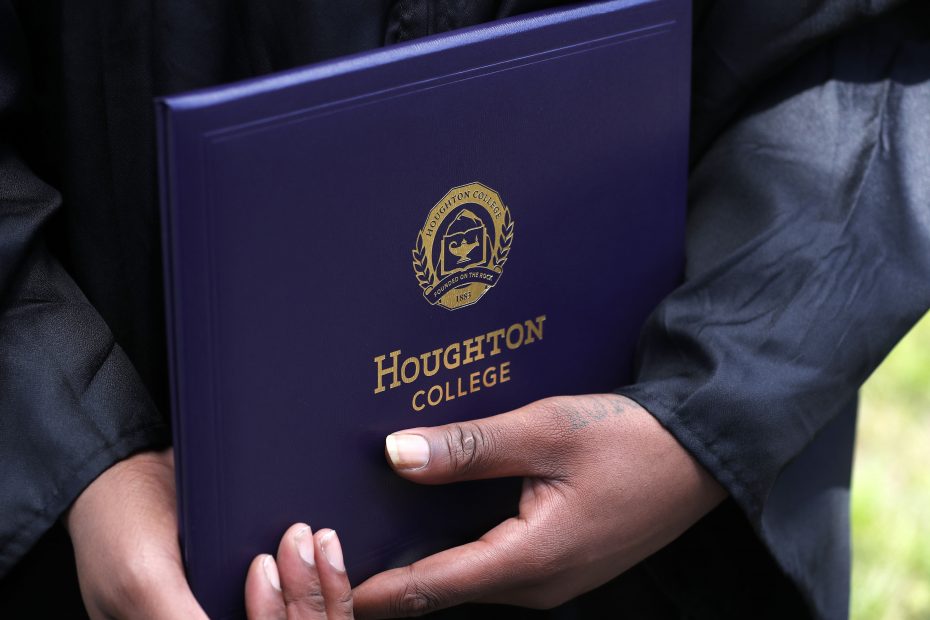