NEW YORK CITY — Debt never dies. Nor do impressions of a childhood in Buffalo.

That first sentence is a line from the new movie “Buffaloed,” which premiered here at the Tribeca Film Festival in late April. The second sentence helps explain why Brian Sacca wrote it, and why he’s fidgety for you – if you’re reading this with any type of Western New York connection – to watch it.

Should he be nervous? That depends on the predisposition of the Buffalonians watching it. If you check out “Buffaloed” looking for affirmation of all that’s gold about the city – noted architecture, trendy downtown living, affordable real estate, rich culinary choices – you’re going to be disappointed. But if you look at it as a comedy, meaning it’s going to poke fun in service of making a larger point, and then see past the (not so untrue) jokes about our Bills obsession and wing pride, this is what you’ll get: A story of a young woman who, against all societal odds and all creepy, domineering men, busts her way to success in the debt-collection industry.

This comes from a personal place for Sacca. Growing up, he saw his mother, who was a school administrator and college professor, fight hard against gender bias. Now he and his wife Adrienne Belai have a 4-year-old daughter, Elliott, whom he hopes won’t have those same battles. He also knows many women in Hollywood who are consistently offered roles and jobs far below their ability levels.

“I wanted to write a story of female empowerment,” said Sacca, who was joined for our interview by “Buffaloed” director Tanya Wexler and co-stars Zoey Deutch and Judy Greer.

Deutch, who at 24 is already an experienced Hollywood performer, plays the lead character Peg Dahl, a young woman who is determined to break out of poverty and become rich. She concocts a scheme to counterfeit and scalp Bills tickets, gets locked up in Albion prison, and in her post-incarceration life, discovers that Buffalo is home to a slimy, thriving debt-collection industry. She senses opportunity, claws her way in, opens her own agency, and clashes with a collection of dirty older men who fail to stop her. She kicks, screams, swears, fights. And beyond all of that, she outsmarts them.

“I recognized immediately that it was a part that was so, so fantastic, and a story worth being told and seen,” said Deutch, who is a producer on the film. 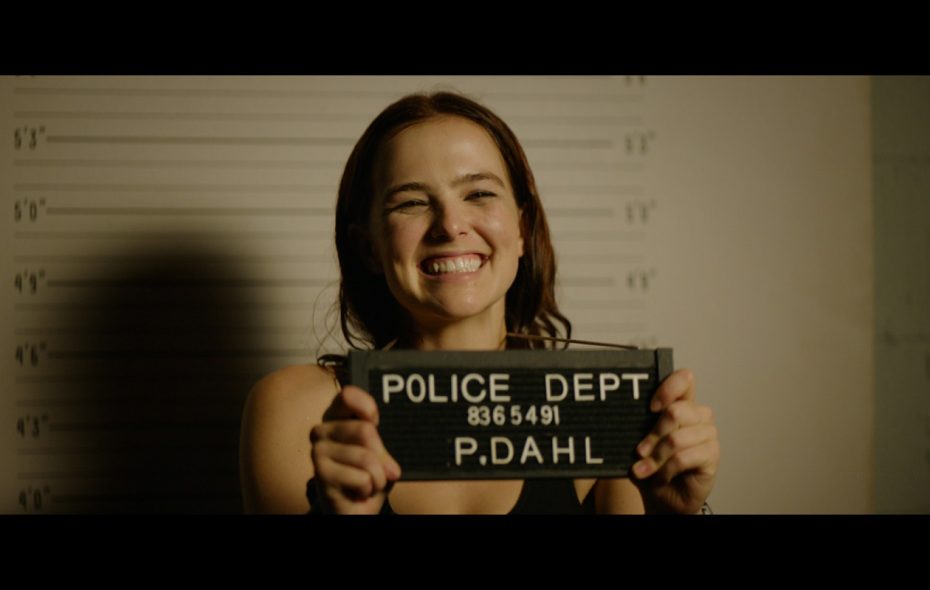 The press notes for “Buffaloed,” which currently can only be seen on the film festival circuit, call it “a story that explores the resistance to female ambition in blue-collar America.”

Put another way: “Buffaloed” is the story of a young woman who takes her goals, her smarts and her abilities seriously, and – in a way any Bills fan could appreciate – pounds ahead with complete disregard for any obstacles.

“We don’t have a lot of female characters who are unapologetic about their ambition,” said Wexler, who directed the shooting of the movie last summer in Toronto. (One day was shot in Buffalo, but for financial reasons, the rest happened north of the border.) “Peg’s character has some things to learn, but she was unafraid. She’d take on anyone, and her gender wasn’t motivating her or stopping her.”

Sacca has lived a distinctly dual existence that informs the story. He spent roughly the first half of his life in Western New York, and the second half away from it. Growing up, he was the younger of two brothers living in a modest Lockport home. His dad, Gerald, was a small-town lawyer; his mom Katherine, an educator. They lived modestly, but had more money than most families around them. Sacca didn’t realize this at the time, but his parents sometimes bought clothes for his friends, whose own families couldn’t afford them.

Then in 1997, soon after earning his high school diploma from Nichols School, Sacca left. He moved here to New York, and later to Los Angeles, to pursue an entertainment career. It worked. In the early days of YouTube, Sacca established himself as part of a comedy duo called Pete and Brian. They posted weekly videos. They did a short film with Bill Murray. Later, Sacca landed a role alongside Leonardo DiCaprio in the Martin Scorsese film, “The Wolf of Wall Street.” He also became the star of a TBS series, “Wrecked.”

That’s successful by itself, but to add to Sacca’s insight on high-level achievement, he could look toward his older brother. Chris Sacca, who also lives in the Los Angeles area, built a successful career as a West Coast tech executive and angel investor. A few years ago, the self-made billionaire appeared on several episodes of the television show “Shark Tank” as a guest investor.

In his earlier days as a comic, he and his duo partner would make up material “for fun,” he said. That’s what comics do, of course, but Sacca realized they can accomplish more.

“We would think of a sketch on a Monday, shoot it on a Friday, and it would be funny,” he said. “It didn’t mean anything. We weren’t saying anything by it. I think as my career evolved and I got a little bit older, I really wanted to make sure I was saying something with whatever I was making.”

Three years ago, after reading stories about the often-vicious and dirty debt-collection industry, which had a large presence in Buffalo, Sacca had his idea. “When I started learning about debt collections, I thought ... ‘Here’s a world where we can see a story of unbridled ambition through a female antihero,’” he said.

'Women don't get these roles'

That approach captured the attention of Wexler, who was finding traditional big-studio Hollywood to be unreceptive to women who are directors. After her 2012 film “Hysteria” received positive reviews, she was turned down for seven studio pictures, each of which went to male directors. Multiple producers came to her afterward and told her they should have hired her – “You had the best pitch,” became a familiar refrain – which echoed the same dynamic on Sacca’s mind: Women aren’t getting the same opportunities in Hollywood as men.

“Buffaloed,” in a small way, could help change that through Wexler as a director and Deutch’s strong, self-directed main character of Peg. 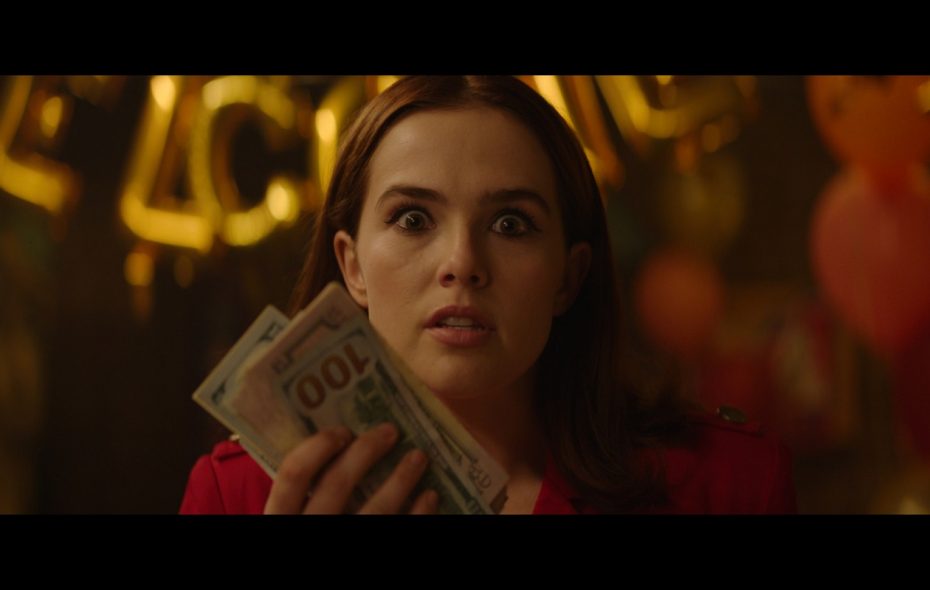 “Buffaloed,” starring Zoey Deutch, is the story of a young woman who takes her goals, her smarts and her abilities seriously, and pounds ahead with complete disregard for any obstacles. (Image courtesy Guy Godfree)

“Women don’t get these roles,” Wexler said. “We don’t write them. I think sometimes as a culture … it makes us uncomfortable because we still cast women in a certain light, hold women on a pedestal or take them down and put them off to the sideline.

“There are roles, and then there are girls’ roles. What I love about this is there’s just a role — and a killer actress to play it.”

Greer, who has two decades of credits in memorable movies (“13 Going on 30,” “Jurassic World”) and wrote a book called, “I Don’t Know What You Know Me From: Confessions of a Co-Star,” pointed out that when she reads scripts nowadays, she asks herself, “Where is my character talking on the phone?”

She means that seriously.

“That is the first thing I look at: Where are writers putting their female characters? Are we always cleaning up or cooking or making coffee or in the kitchen or something?”

In “Buffaloed,” Greer’s character Kathy does spend a lot of time in the kitchen, but there’s a catch: It’s entrepreneurial. She runs a salon out of their home, trying to scrape by while keeping an eye on her two adult children. She’s a single mom, climbing out from a mountain of debt left by her late husband. She’s goodhearted and wholly imperfect.

“She smokes, she swears,” Wexler said.

“She’s a human,” added Wexler, noting that Kathy is “the moral compass of the movie in many ways. I think we also take these mom characters and put them on a pedestal and make them perfect.”

She jokingly tossed her long blond hair. “It’s not like she couldn’t have,” Greer said with mock haughtiness.

The group had fun with the process of making their characters real. That included driving around Western New York to get a feel for the area, thrift shopping in Buffalo for costumes, and talking to locals to pick up on the Buffalo accent. (“Debt” becomes “duht,” for example.)

“I secretly recorded a bunch of people,” Deutch said, pulling out her phone to find a picture of a restaurant she visited for beef on weck. She scrolled and found it: Steve’s Pig & Ox Roast in Lackawanna. 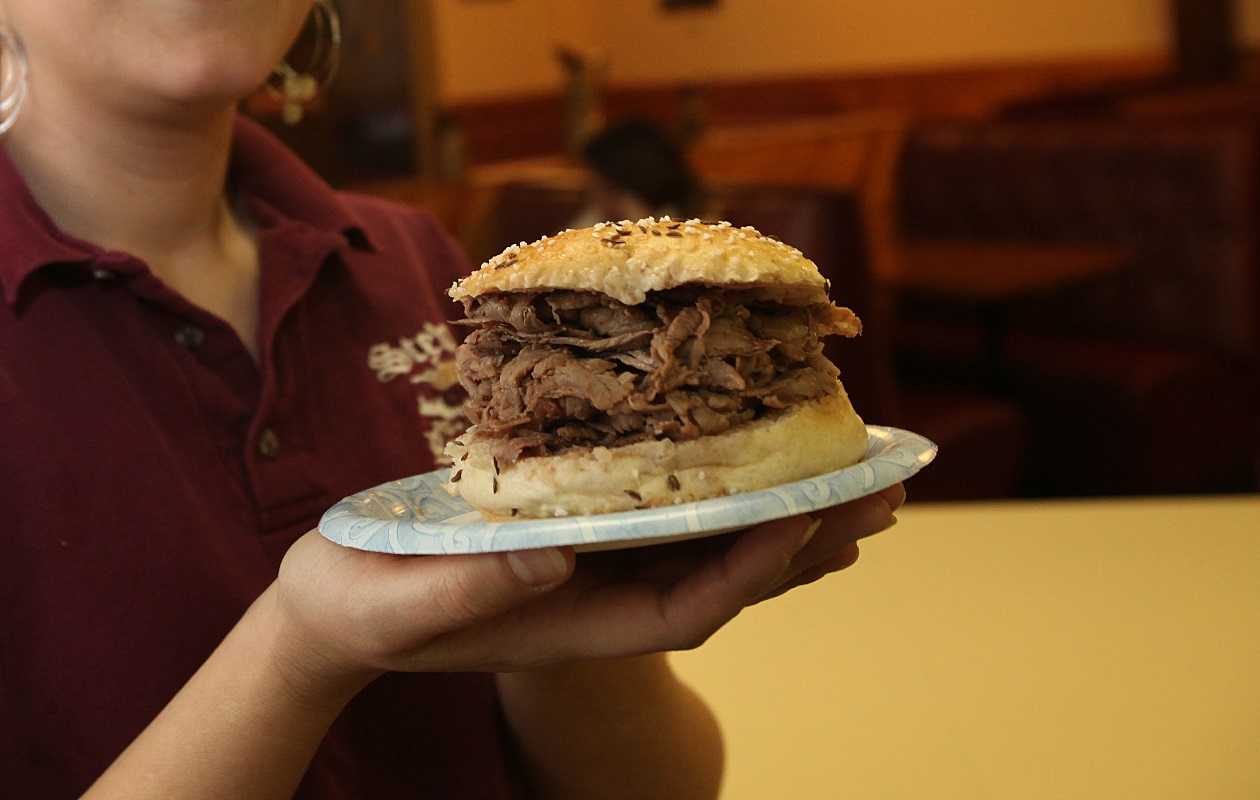 “They have a roaster right in the front,” she said. “I actually was very impressed.”

“You chatted with Steve,” Sacca said.

Life in Buffalo does come across as fairly simplistic in the movie: The town is portrayed as one driven by the Bills ... and wings … and football … and wings. Deutch’s character Peg is sent to jail after the judge and her lawyer get in an altercation over who has the better wings: Anchor Bar or Duff’s?

“It’s a comedy, and the gentle nudging of Buffalo comes from a place of love,” said Sacca, who avoided the major Buffalo cliche: The movie has zero references to snow and cold. The joking is about blue-collar, Rust Belt culture; in many ways, Buffalo could be Dayton, Pittsburgh, Cleveland, or any number of industrial cities.

That Buffalo was a little more timeless, a little less forward-thinking, largely trend-averse, and then – as now – smitten with football.

“I love Buffalo,” Sacca said. “I’m very grateful I grew up there, but it’s a weird place. We all have weird experiences. My personality has been shaped by the fact we lost four Super Bowls. … I don’t have heroes because all my heroes failed me in the ‘90s!”

Wexler, Deutch and Greer laughed. They get this — now.