So far, however, no homes are imminently threatened by the rising waters, as 240 feet of state-provided aquadam, a rubber wall about 4 feet tall, has been installed.

The town also has plugged its storm sewage drainpipes to the lake because the backwash of lake water was filling them. The town has stepped up pumping of the storm sewage from the western part of the hamlet of Olcott to the eastern part to take pressure off the system, Horanburg said. If the conditions continue to worsen, another pump may be added on Main Street, he said.

Thursday's wind and late-day rain exacerbated the waves crashing to shore, damaging a berm constructed along the lakefront by state crews only a few days ago.

"It was two-tiered. The bottom half is completely gone," Horanburg said. He added that the top half has been damaged.

"Our beach was completely decimated (Thursday)," Horanburg said. That's the same beach in Krull Park that was closed for all of 2017 because of flooding that year. 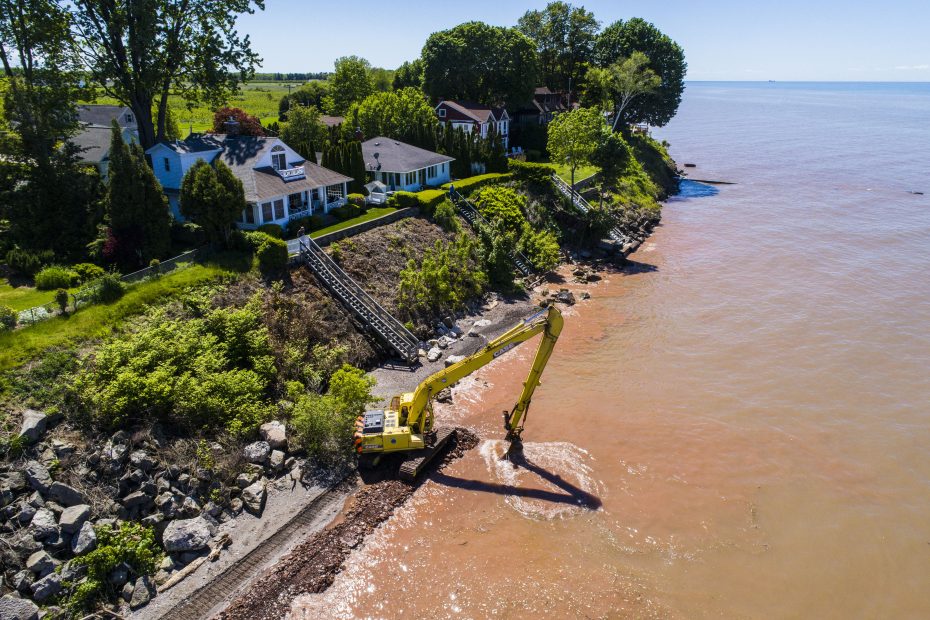 Excavators work to reinforce the beach in Olcott to repair damage from the recent flooding on Wednesday, June 7, 2017. (Derek Gee/Buffalo News)

The official lake level reading at the National Oceanic and Atmospheric Administration station in Olcott late Friday morning was 247.94 feet, about the same as 48 hours before.

The Army Corps of Engineers reported Friday that the water is 21 inches above average for this time of year and forecast an additional rise of 7 inches in the next month.

Also, the state has deployed 18 sandbaggers, over 850,000 sandbags, hundreds of pumps, and over 3,200 feet of aquadam to the impacted regions.

"Remember 2017, remember the flooding. The water will most likely come back to the same areas to almost the exact same spot. If you had damage in 2017, don't wait for the floods to come. Please call your local supervisor, your local mayor and tell them you need help so they can call the state," Cuomo said. "We have National Guard, we have aquadam, we have sandbags, we have pumps, we have people deployed. But we need to know where they need to be deployed before the fact."

Meanwhile, the International Lake Ontario-St. Lawrence River Board reduced the outflow from the lake twice Friday, as it continues to try to balance the high water threat along the lake's New York shore with the flooding that has occurred in the Montreal and Ottawa areas.

Friday's reductions – from 2 million gallons per second to 1.85 million – came in the wake of two increases Wednesday in the outflow past the dam at the east end of the lake between Massena and Cornwall, Ont.