“Fun Home” is a glorious musical. Indeed, this exquisite show reminds us why musical theater exists. When the need for the characters to express themselves reaches the limits of speech, their thoughts and emotions overflow into song. And in this intriguing story, adapted by Lisa Kron and Jeanine Tesori from Alison Bechdel's graphic memoir, also called “Fun Home,” speech frequently fails the characters. Emotions spill over into anger, into reckless behavior, into deceit, into visual art, and of course, into song.

This production also reminds us why MusicalFare exists, and why we are lucky it does. Devoted to musical theater, this company has helped develop a lot of local musical talent. The company moved downtown to Shea’s 710 Theatre, away from its Snyder home, to tell us this particular story.

MusicalFare does this with some of the finest musical theater performers the region has produced. The excellent direction of Susan Drozd allows the narrative to breathe on the expanse of the 710 Main stage with clever choreography by Kristy Cavanagh. This is augmented by set, light and sound design by Chris Cavanagh; and with expert music direction by Theresa Quinn who also plays the piano, and is joined by a fine group of six other musicians. (I adore the interplay of clarinet, violin and piano in this sublime score.)

In “Fun Home,” Bechdel reminisces about two parts of her life. First, growing up in the house her father meticulously restored and furnished, unaware that he is secretly gay and that her parents’ marriage is horribly strained. And second, coming to terms with her own homosexuality while in college. The “Fun Home” of the title refers to the family home, which doubles as a funeral business.

Bechdel is played by three actors. Robyn Lee Horn plays adult Alison, who is the narrator, recalling the events of her life as she tries to draw her graphic memoir. Renee Landrigan plays Medium Alison, who navigates the character’s college years, including her coming out as a lesbian, having her first relationship with a young woman named Joan, and as she learns of her father’s secret life. Ten-year old Jane Hereth plays Small Alison, and shows us a little girl who wants to wear boy’s clothes and whose life will only make sense to her retrospectively. 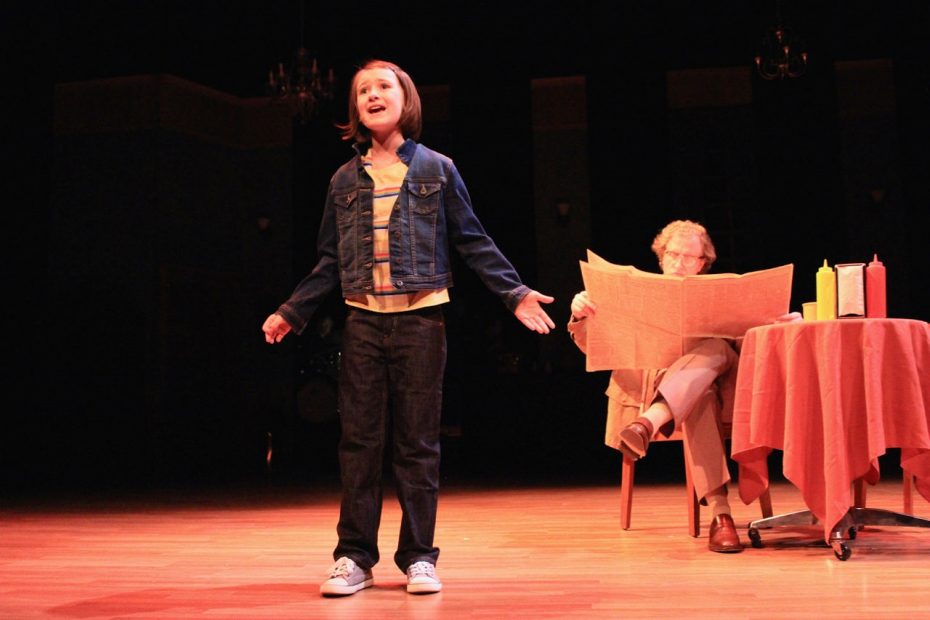 Each actor is marvelous in a different way. They all sing well. Horn seems to carry the show effortlessly, skillfully landing the character’s frequent moments of tension-diffusing humor, especially when she winces at the statements and actions of her younger self.

Landrigan is the master of self-deprecating humor, who alternately radiates happiness and despair as she gives herself over to Medium Alison’s adolescent forays into the unknown.

Young Ms. Hereth astonishingly approximates the performance of Sydney Lucas, who originated the role, also at the age of 10. Her performance of the “Ring of Keys” in which she begins in interpret her identity while watching a butch delivery woman is powerful and uplifting.

Chris J. Handley is amazing as Alison’s complex and conflicted father, Bruce. He sings expressively as he explores the unplumbable contours of his character. He is matched by sensational Michele Marie Roberts, who plays Alison’s mother, Helen, with a voice as smooth as a trumpet and a command of the stage so secure that this show, for the first time, reminded me of Adam Guettel's “Light in the Piazza,” also about a woman with an unusual daughter, who has sacrificed her life to a marriage that cannot sustain her.

LauRen Alaimo is excellent as Joan. Steve Copps plays a succession of Bruce’s inappropriate objects of desire with agility and humor.

There were a few little ironies and coincidences that deepened my enjoyment of this joyfully wonderful production. Beth Malone, the original Alison, appeared on the 710 Main Stage in “Ring of Fire” back in 2005. Nashville-born Jasper Brown, a little boy with a big personality, is the grandson of the “Ring of Fire” music director, and his mom was the music copyist.

It was also on this stage, many years ago, that I heard the score for a musical called “Galileo” by Jeanine Levenson. I praised her work and wrote that I thought she would go on to do great things. I was admonished by a senior colleague who told me I was too young to make such pronouncements. That composer would become Jeanine Tesori, who would also write “Fun Home,” “Caroline, or Change,” “Shrek The Musical,” Thoroughly Modern Millie” and “Violet.” I thought of that during “Fun Home” when Bruce tries to “correct” Small Alison’s drawing.

Before you leave the theater, you will be asked to write down a moment in “Fun Home” that grabbed you, and spoke to your own life. That one grabbed me.