Sheila Banks recalls the shooting flames, orange and yellow, reflecting in her front window as the house next door – just a few feet away – was ablaze in the early morning hours of Oct. 2, 2015.

It was, in fact, one of her biggest fears for years, as the vacant Seneca Street house got more run-down with each passing day.

"I woke up in the middle of the night, went to the bathroom, and as I was walking back, I heard a loud bang, looked at the window and saw flames blowing at my window," Banks recalled. "I glanced to the right, and the house next door was completely engulfed in flames. We hurried and got dressed, got the dogs and walked out the door."

The house at 1276 Seneca St. was yet another property flipped by AbdulAziz HouHou and associates – making it one of 17 that were demolished in Buffalo since the house-hunting spree began in 2013. Half of the 17, The News found, were damaged by fire before being torn down.

The Buffalo News reported last month that HouHou, a Kuwaiti real estate broker who is now in prison in Kuwait, and his companies bought or brokered at least 160 Buffalo properties from 2013 to 2016 that were sold to Kuwaiti investors.

HouHou's operation marketed the houses as "attractive rental properties," with guaranteed rents, but investors say many of the houses ended up being run-down, often vacant, and in troubled neighborhoods. The houses, according to a Kuwaiti court, turned out to be part of a $140 million to $240 million international Ponzi scheme, that also included houses in Rochester, Detroit and Cleveland and vacant lots in Florida and North Carolina.

In some instances, according to Ali Al-Attar, an attorney for the Kuwaiti investors, the HouHou organization – rather than the owner – was listed as insurance beneficiary on the flipped properties. And there were times, investors said, when insurance claims were filed and collected after fires, but the money was never given to the Kuwaitis investors who owned the burned-down houses.

[Related: How a Kuwaiti's Ponzi scheme left a trail of blight in Buffalo]

In this case, it's unclear if the Seneca Street house was insured.

HouHou was convicted in a Kuwaiti court last year of fraud and money laundering and was sentenced to 10 years in prison and a $16 million fine. 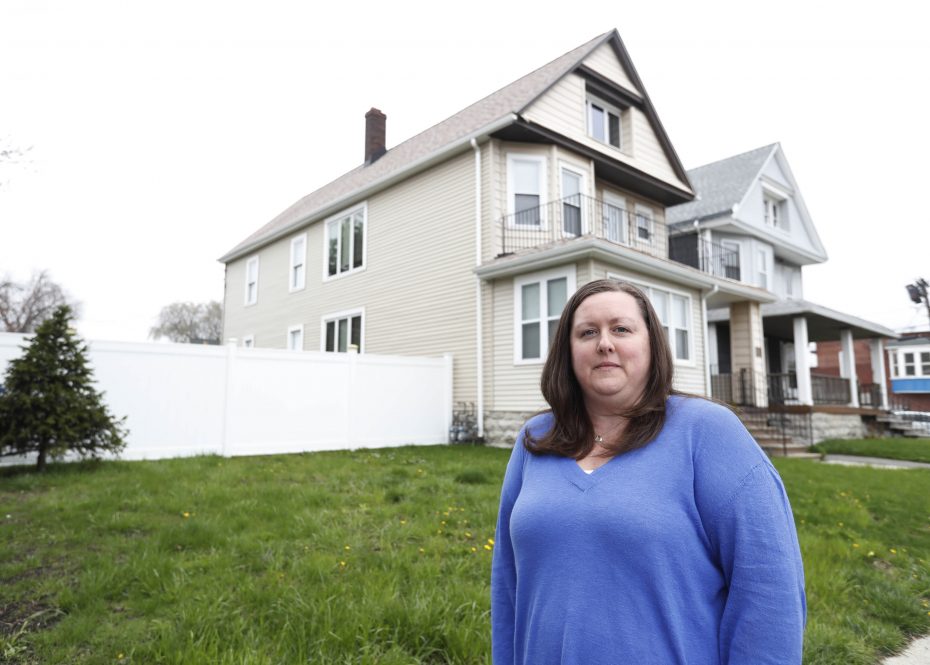 Sheila Banks lived with her husband, Dennis, at 1278 Seneca St., the house behind her, in October 2015 when the vacant house next door caught fire in the middle of the night. There is now a vacant lot there. (Sharon Cantillon/Buffalo News)

The News attempted to contact HouHou in prison but did not hear back.

After Banks read The Buffalo News articles on HouHou's flipping scheme, she recalled the 2015 fire that destroyed the house at 1276 Seneca St.

She knew the house well.

Banks, 45, lived next door at 1278 Seneca most of her life. It was the home she grew up in. Once she got married, she and her husband, Dennis, 47, lived in the upstairs apartment while her parents remained on the first-floor unit. When her parents died, Banks inherited the house and continued living there.

The house next door at 1276 was in good condition when she was growing up, Banks recalled.

It was one of several foreclosed properties Beaville West, a Batavia-based corporation, bought from the city that year, records show.

The house continued to deteriorate during the five years Beaville owned the property, and the only occupant was a man Beaville hired to do some repair work, Banks said. He was squatting for a few months, she said, when a small fire occurred at the house in August 2013.

"Luckily a policeman was going by and got the fire out before there was much damage," Banks said.

The city boarded the house up, and was considering demolition, Banks said, when, in March 2014, Gregory Levin, who is associated with Glebova Realty in the Town of Tonawanda, bought the house from Beaville for $9,000, records show.

Workers came by and began cleaning out the house, and doing what Banks viewed as limited and quick-fix rehabbing.

"It was terrible. They were trying to put a Band-Aid on so they could put it on the market," she said.

About 90 days after buying the house, Levin sold it to AlSayegh, a Kuwaiti investor, in a deal brokered by HouHou's firm, records show.  The deed filed in the Erie County Clerk's Office says AlSayegh paid $40,000, but AlSayegh said he paid HouHou's company about $77,000 for the house.

In June 2014, tenants moved into the first-floor apartment of 1276 Seneca St. But there was no gas or electric in the apartment, Banks said.

"They're in there in June with no electricity, and can't get a hold of the owner or the property manager," Banks recalled.

Not long after, the upstairs apartment was also rented out, she said.

"The people were on the downstairs porch sitting on chairs, and the guy upstairs is leaning on the porch railing, and the railing gives way, and he lands on one of the other tenants sitting on a chair," Banks said.

Others came by to look at the apartments, but none rented, and conditions continued to deteriorate, she said.

The railing remained broken. Windows were stolen from the house. The side door was missing. There were no locks on the front doors. There was garbage on the front porch. The sidewalk wasn't shoveled in the winter. The grass wasn't cut in the summer.

"My biggest fear was someone would get in and start a fire, and there goes my house," Banks said. "It was three feet from my house." 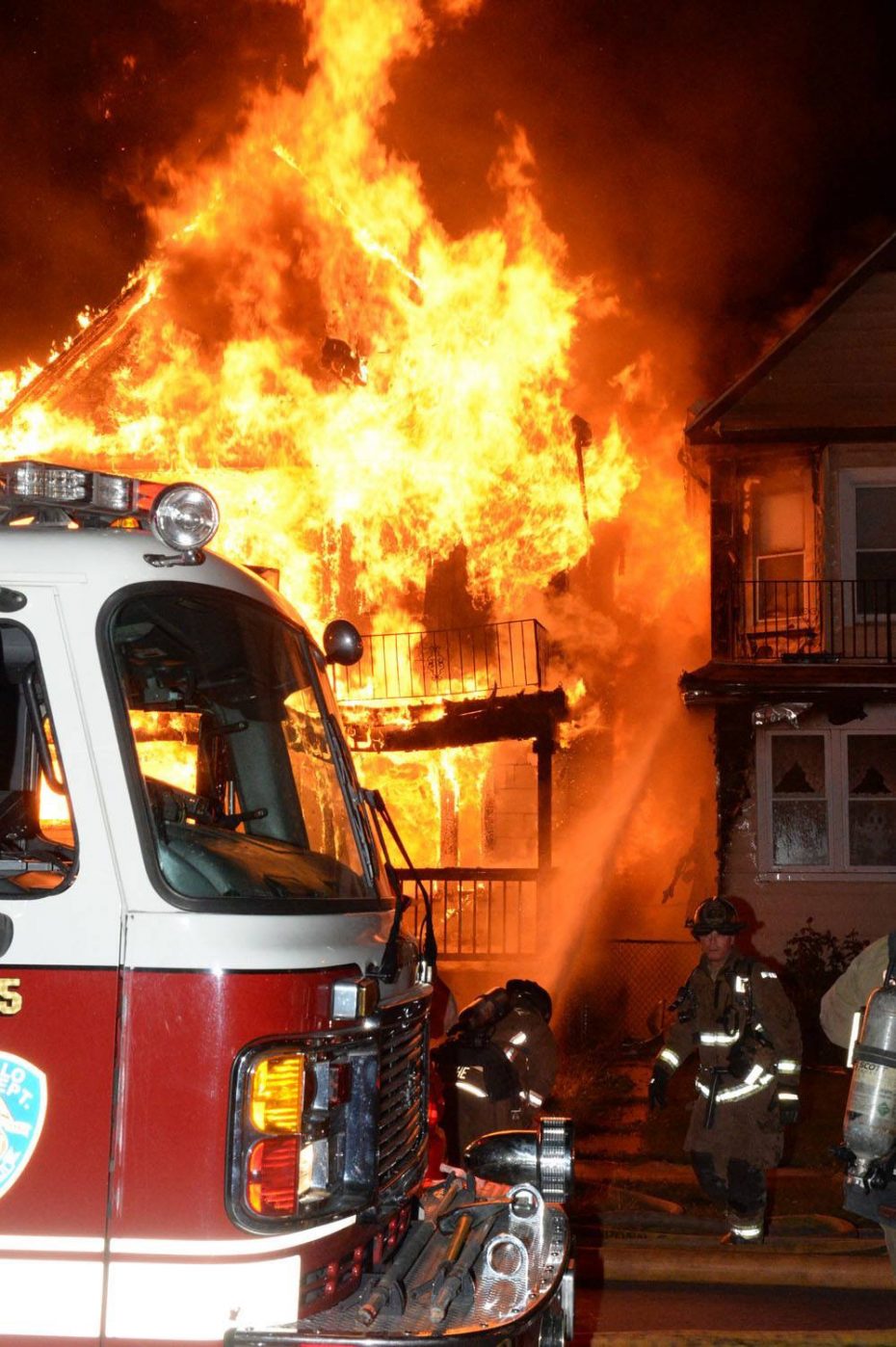 The 1276 Seneca St. house had been empty for over a year, according to Banks, when the fire broke out.

Banks and her husband were up late watching television in the living room, and fell asleep on the couch, she recalled. It was unusual for her to wake up in the middle of the night, but she did that night.

When she saw the orange glow in the window, she woke her husband.

"I jumped up," Dennis Banks recalled. "Thank God she woke up."

The fire destroyed the house at 1276 Seneca. Banks' house at 1278 Seneca was saved, but sustained some fire and heavy water damage.

"The firemen did an amazing job in saving my house," she said.

Banks said she was told the fire was likely an arson. No one was charged.

The city eventually foreclosed on 1276 Seneca, and sold it at auction for $500 to the person who also purchased 1278 Seneca from the Bankses.

Banks and her husband moved about two miles away.

AlSayegh, in a telephone interview with The Buffalo News Saturday, said he was unaware of the fire, or that the house had been demolished shortly after the blaze, or that the vacant lot was subsequently foreclosed on and sold at auction. 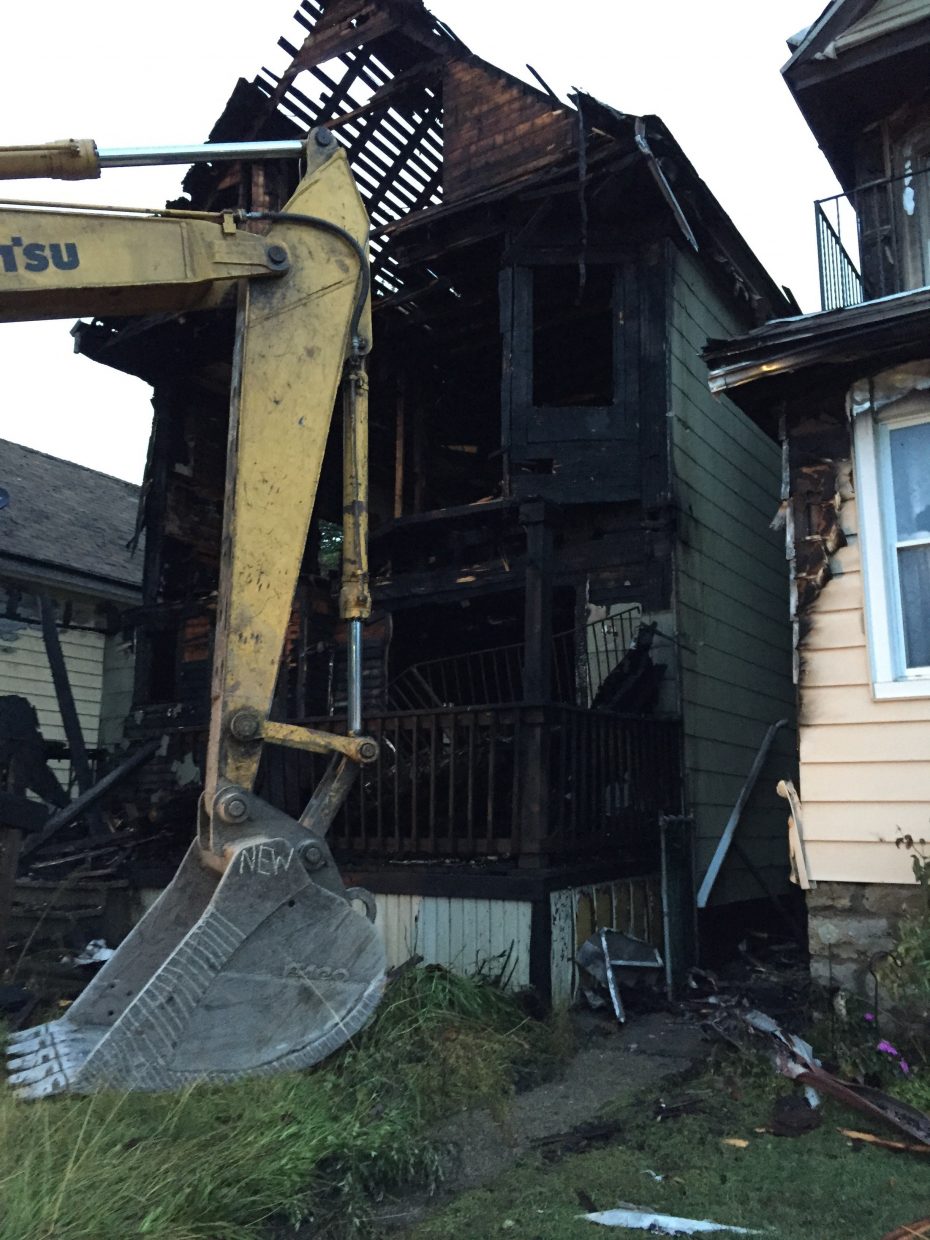 This is the aftermath of a fire at 1276 Seneca St., which destroyed that rental property and damaged the home of Sheila and Dennis Banks next door. (Photo courtesy of Sheila Banks)

Like other Kuwaitis caught in HouHou's scheme, AlSayegh, 62, a retired civil engineer, said he was told the house was in good condition and already rented when he purchased it in 2014. But after a few months, the rents stopped, and the HouHou organization provided little additional information on the property, he said.

AlSayegh said he purchased insurance when he bought the house, then signed an agreement allowing HouHou's organization to make future insurance, tax and other payments from rent the organization collected from tenants.

But AlSayegh said he never received a deed nor any other documents on the property except a one-word notification from a HouHou company in 2016 that the Seneca street property was "vacant." With the realization that HouHou had scammed Kuwaiti investors, AlSayegh said he did not think he actually owned the Seneca Street house.

The Bankses, meanwhile, said they are grateful no one was hurt in the fire, but Sheila Banks said the entire episode was frustrating, and raised questions in her mind about long-distance property ownership.

"I always questioned how someone from across the world could properly maintain a property," she said. "You have to be there to see what is going on."

The houses Buffalo lost in a Ponzi house-flipping scheme