After a booming five years, Buffalo's food truck growth has pumped its brakes.

Larkin Square's Food Truck Tuesday, which began in 2013 with roughly 15 trucks, originally shined the spotlight on mobile food vendors. The series' popularity, as well as the success of Lloyd Taco, the city's first truck, pushed the industry into overdrive. The number of food trucks more than doubled for the second season, which lengthened from 16 weeks to 26 and invited Rochester trucks.

By 2015, the number of trucks exceeded the space at Larkin Square and resulted in a scheduled rotation, with the overflow vying for spots at nearby Flying Bison Brewing Co. Because demand was so high, more weekly events were started in Niagara Square, Niagara Falls and at the Buffalo Niagara Marriott in Amherst, as well as monthly Food Truck Rodeos outside the History Museum.

Fast forward to 2019, when 48 food trucks grace Larkin's list for the season, which began April 23, despite room for only 28 at a time. Still, the addition of new food trucks to the Tuesday lineup has been consistent, with six to 10 new trucks applying each year for the last few years, said Leslie Zemsky, Larkin Square's director of fun. That number is skewed by established brick-and-mortar restaurants starting their own trucks, which present less of a risk; with those omitted, there's been a total of seven new Buffalo businesses added to Larkin for the last two seasons.

Since food truck festivals have traditionally been the best chance for fledgling mobile food entrepreneurs to make money, and that setting is more crowded than ever, why are new trucks still opening? Riding the wave of food trucks' novelty is no longer enough incentive; more than 20 trucks have shut down over the last five years, at times teaching harsh financial lessons.

The owners of four trucks that have opened in the past two years shared their rationales for starting a mobile food business in Buffalo.

Through years of barbecuing, Buffalo native Jamel Humphrey fell in love with sauces, concocting more than 20, many with their own personalities. Feedback from barbecue buddies had him confident his product could thrive in stores, but early supporters had other ideas.

"They said, 'You should cook the food; we like your sauce on it,' " Humphrey explained with a laugh.

Humphrey's Mad Sauces Food Truck is part of the Larkin rotation for the first time, and he'll feature a dizzying array of sauces on chicken, burgers, turkey ribs and french fries. His No. 1 seller is Henny BBQ, a more-rich-than-sweet sauce made by reducing Hennessy, the mega-popular French cognac. The alcohol cooks off, but the lingering flavor remains.

The food truck owner has listened to his friends and family, too. My Candy Reign, a sweet-and-sour barbecue sauce, was inspired by his daughter's love for Sour Patch Kids. Quell's Spiced Maple was the brainchild of friend Marquell Key. Humphrey said customers are encouraged to mix and match sauces; some pair together brilliantly. 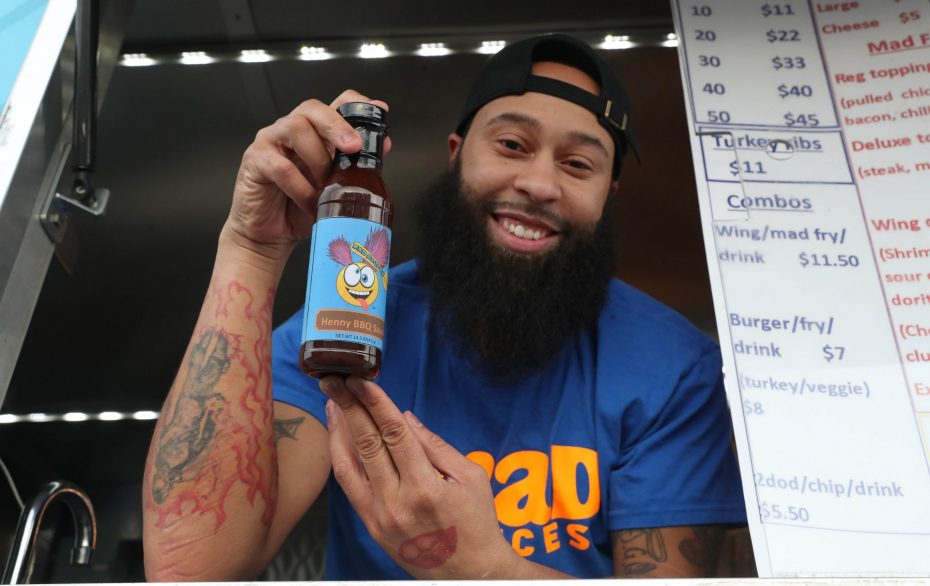 Humphrey didn't start with the desire to run a food truck – his customers essentially demanded it. (Sharon Cantillon/Buffalo News)

Humphrey said he hopes to open his own brick-and-mortar location, but starting with a food truck made the most sense for spreading his sauces, which also may be purchased online, and providing an adjustment period for learning how to serve customers and run a business.

"Food trucks are more cheap and convenient than a brick-and-mortar, and that's better despite the winters," Humphrey said. "I'd rather move around than be stationed somewhere."

Even though he sells a version of barbecue, one of the most common food truck specialties in the area, Humphrey said his sauces – especially the catchy Hennessy flavor – will allow him to distinguish himself.

Jamaican food can be found at a few Buffalo restaurants, but according to a market study conducted by husband-and-wife duo Tabitha and Phillip Bernard two years ago, the Caribbean cuisine was nowhere to be found in Niagara Falls.

Phillip, a Jamaica native who was issued his green card last May, wanted to expose his homeland to the Falls. He knew the right spices – such as Betapac Curry Powder and Walker Wood Jerk Seasoning – to import for the right punch and authenticity.

Mobility is especially key in tourist-haven Niagara Falls, and operating a food truck lends service flexibility when crowds slow to a trickle during the offseason. 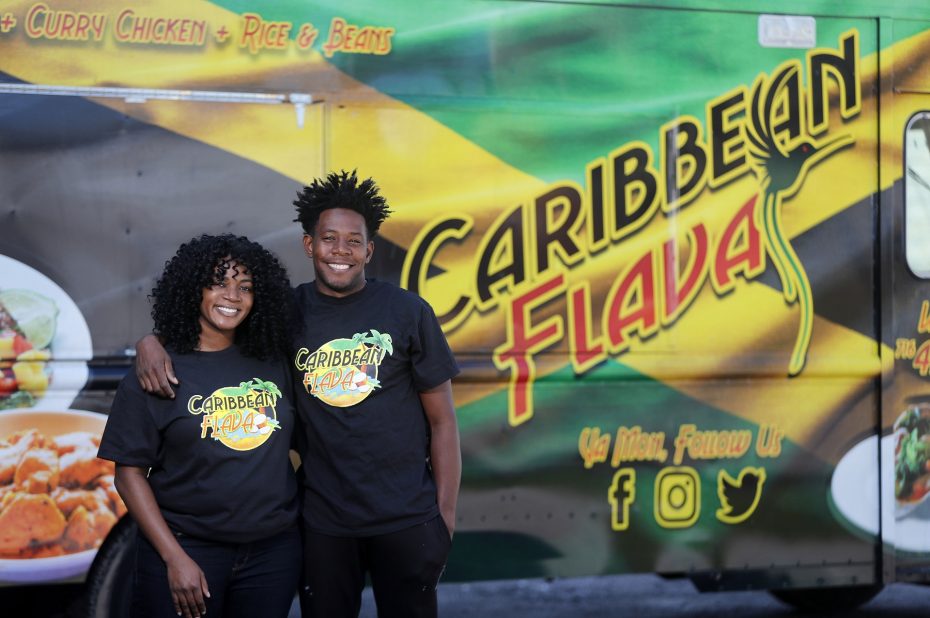 Tabitha said there's not a considerable Caribbean population in the Falls, but tourists have either vacationed in the Caribbean or tried Jamaican food in cities with a bigger presence; these customers don't have the reluctance of those who have never dabbled in the cuisine.

Among Phillip's specialties on the Caribbean Flava food truck are the Flava Wrap (boneless jerk chicken, rice, beans, cabbage and jerk sauce, $8) and the Jerk Chicken Meal (a quarter chicken, rice, beans and stewed cabbage, $12). Jerk wings are new to the menu for this summer, and Tabitha mentioned oxtail would return after selling well last year.

Tabitha credits Raul Parker, a fellow Niagara Falls High School graduate and owner of the Dirty Bird Food Truck, one of the few trucks based in the Falls, with encouraging words, tips and permit help to spark the Bernards' business. Equipped with this information, Tabitha said she is confident Caribbean Flava can make some noise.

"There's plenty of opportunity to make money in this industry," Tabitha said.

Although the project is still developing, the Bernards plan to open a small takeout restaurant at 630 10th St. in Niagara Falls to complement their truck's meanderings.

Robyn Tyler swore she wouldn't return to Western New York after serving in the U.S. Navy, but often time – like the two decades Tyler spent away from home – softens these commitments.

Now raising her daughter (and a pot-bellied pig named Jeremy) in rural Springville – the family's first sense of stability – Tyler needed employment. She started at a Southtowns debt collections agency, rising to management before an abrupt layoff saw her searching again last spring.

This adversity resulted in a spontaneous – if semi-calculated – move. Knowing her first degree was as a culinary student at Erie Community College City Campus, Tyler trusted she could run a food truck as long as upfront costs wouldn't put her in significant debt. She found a U.S. Postal Service truck on eBay, and won the bid for a reasonable $2,100, roughly 20 times less than the cost of a new custom-built food truck. 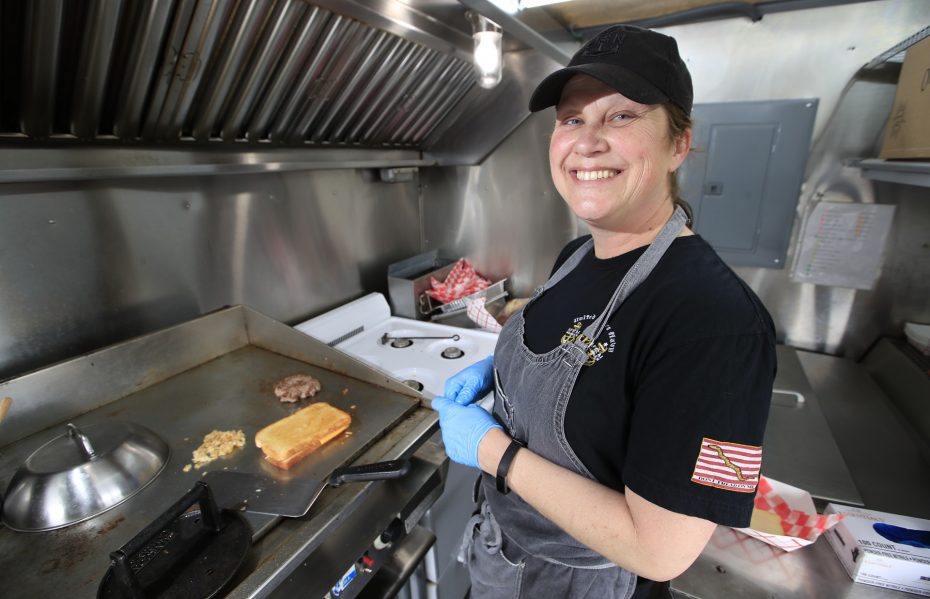 Thanks to her handy brothers, Kris and Scott Bacon, a family friend and her own willingness to learn, Tyler transformed the mail truck into a mobile kitchen named MooCheesy. She paid cash for everything – aside from a small loan she now regrets – a strategy she could never do if she were starting a brick-and-mortar.

"There are moments where you fear that you made a huge mistake," Tyler admitted. "But I fell back in love with cooking for people."

MooCheesy's namesake item comes as a half ($9) or a whole ($16), comprising either one or two quarter-pound, griddle-pressed burgers hand-ground with a brisket blend, topped with caramelized onions between two grilled cheeses. Tyler is proud of her steak sauce – which has potential for distribution – concocted with help from her 10-year-old nephew. For something less extravagant, classic grilled cheese sandwiches are $6.

A successful Holiday Valley event – where she sold out her before its conclusion – inspired confidence in Tyler, who now plans regular stops in Springville and Arcade this summer, as well as a weekly Food Truck Rodeo in North Collins. Tyler is working on permits for more of the Southtowns, too.

Entering its third year, the Great Aussie Bite is the oldest food truck here. But Tammy and Andrew Shearer's reason a mobile kitchen is worth telling.

"The cost of running a brick-and-mortar is atrocious, really," Tammy said. "Food trucks were so popular, and the cost is significantly lower. You're not stuck sitting all day waiting for customers – you can go to them. It's the way of the times now."

A West Seneca native, Tammy met Andrew Shearer, from Australia, playing a game online in 2012. Even though Andrew had no professional culinary background, he was devoted to the cuisine of his homeland, virtually impossible to find in Buffalo. 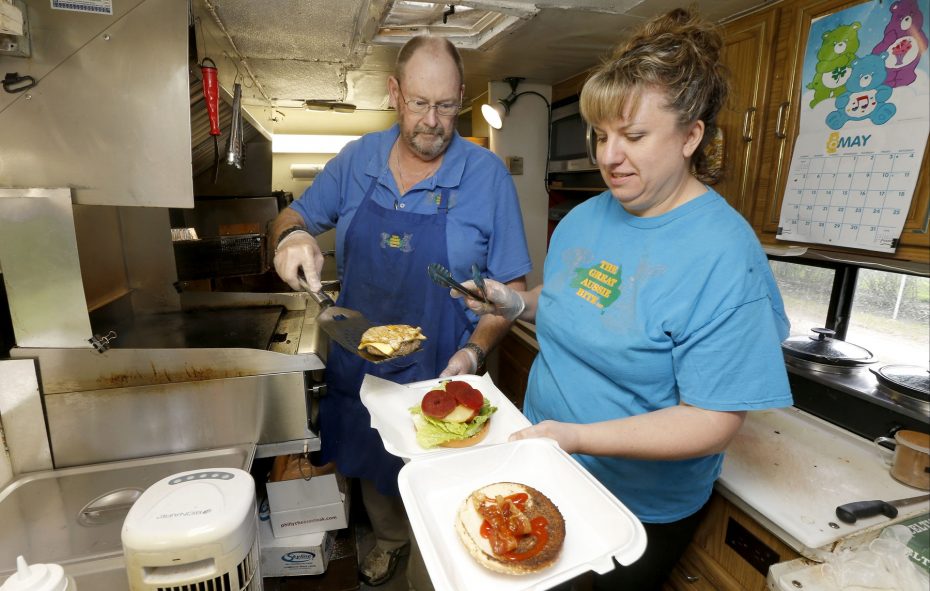 Andrew Shearer, left, a native of Adelaide, South Australia, places a popular Aussie Burger with the Lot on a toasted bun with the works prepared by his wife, Tammy, in the kitchen of their food truck. (Robert Kirkham/Buffalo News)

The Aussie Burger with the Lot ($9.25) steals headlines: a 6-ounce handmade burger is topped with cheese, sliced pineapple, fried onion, bacon, beets and a fried egg. Maybe it's Andrew's thick Australian accent, but the Shearers are beet evangelists, thanks to the burger and the Outback Steak Sandwich (also $9.25).

In light of Buffalo's competition, Tammy looks at Buffalo's scene with perspective, noting Pittsburgh boasts five times as many trucks.

"You always worry about it in the back of your mind," she said about overcrowding. "You want to make money and not have 10-12 trucks at a function with you. We go with the flow, and customers appreciate our food and the heart and soul we pour into it."

Given her negative memories from the brick-and-mortar industry, Tammy doesn't envision opening a stationary shop if the Great Aussie Bite takes off in popularity. She would consider adding another truck, and if that happens, beware the beet takeover.