Most schools have a Mount Rushmore of coaches who not only have guided programs to competitive success, but who have helped youths develop into fine, upstanding adults.

Lancaster High School is no different other than it might need more space than most schools since there is no way of narrowing down its list to just four. That’s especially true with Kevin Carriero, who is set to run off into retirement once the track and field season has finished.

Carriero has coached Lancaster for nearly 50 years, inheriting the varsity reins at the age of 22 after earning a year’s experience as head coach of the junior varsity team. The 71-year-old Carriero is set to coach his last meet June 8, which is the final day of the New York State Public High Schools Athletic Association and Federation championship meet at Middletown High School, provided one of his athletes qualifies for the event.

Lancaster Athletic Director Brian Wild has been preparing for this since Carriero informed him of his exit strategy two years ago. It hasn’t made handling the anticipated departure any easier for Wild, who had Carriero for a gym teacher and then coached football with him when both were assistants on Len Jankiewicz’s staff.

“He’s going to be a huge hole to fill not just in track and field but as one of our main coaches,” said Wild, who has yet to search for a replacement. “I’m just trying out of respect to enjoy the last season. I just want to make it a memorable last season for him.”

One of the staples in their teachings is how hard work and having a good work ethic can lead to a rewarding experience in sports and in life.

“We are losing the Godfather of Section VI track,” said University at Buffalo assistant and former Sweet Home and Canisius High coach Brian Lombardo. “When he told me (of his plan) last year, I said 'Why not hold on for 50 (years)?' That may have been selfish of me wanting to see him hang on. He really has been a role model for every section chairman and coach. You hate to see him go, but I don’t think anyone else deserves a break more than him.”

Carriero said he is hanging up his whistle and clipboard because he doesn’t want to be in a position where he’s considered a liability.

“I just decided two years ago that’s when I’m going. You can’t do this forever,” he said. “Head coaching takes on mentally a great deal of responsibility and a lot of work. I’m kind of a 19th century guy. I don’t do things off a computer or internet. I hand print everything. ... At some point, you reach that point where it’s time for a change. I certainly haven’t felt any pressure from administration.” 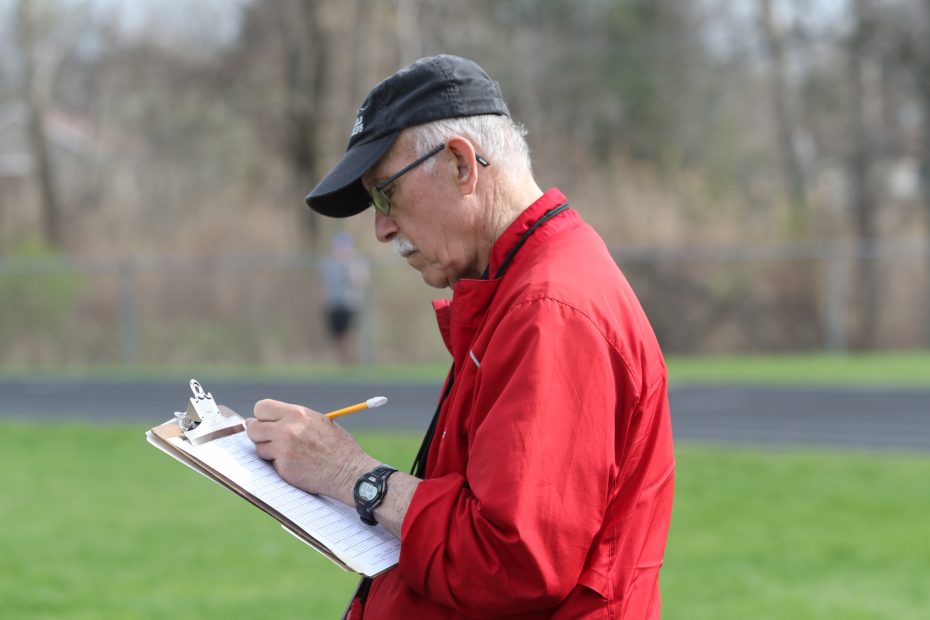 Carriero retired as a physical education teacher in 1999 while battling Stage 3 pancreatic cancer. He thought then he might have to step down, but went from a substantial weight loss (50 pounds) due to the illness to regaining 30 pounds. He opted to remain coach.

“I was fortunate it was located in one spot,” he said of the cancer. “Grace of God and good doctoring, I was fortunate enough to stay on this side of the grass.”

Carriero had another cancer scare in 2004 when a tumor that appeared to be in stasis rapidly grew 9 centimeters. That resulted in him needing to undergo chemotherapy and taking time off from coaching. However, he still showed up to practice in an unofficial capacity, and credits that with saving his life.

“That was tough when I was going through chemo and radiation,” said Carriero, who returned to the district in 2005 to work 12 more years as a lifeguard. “I remember sitting on one of those roller chairs and quite literally just rolling myself up and down sides of the field house because walking was out of the question because I was too tired. My coaches, as they’ve always done, had my back and so did the kids. When I was going through all this, I had great care from my doctors but the (kids and coaches) saved my life. I believe that to the core.”

While Carriero, who threw the javelin at Bennett High School and at University at Buffalo, has coached his share of champions, a successful season in his eyes was one in which an athlete performed better or at peak level during the final day of the season compared to the first. He’s most proud of the fact that his student-athletes were great representatives of the school and community.

“It’s been a great ride, but like all things, it comes to an end and I’m OK with that,” Carriero said. “We talk to the kids about being a family, no matter how far you travel, this is always home.”

Carriero hopes the school district treats filling the track and field vacancy as a priority, like it would if the football program needed a coach.

Regardless of how long it takes to find a successor, Carriero plans to use the playbook of Jankiewicz and legendary football coach Joe Foyle, and stay away during the transition.

“I’ve talked to the kids about it already and the coaching staff,” he said. “It’s important for a team to hear one voice and that voice can’t be me. There’s nothing more divisive than having a retired coach hang on. They’ll look at me and then the new coach. That’s a program killer. I talked about that at the Dartmouth relays with the team. I need you to do me a favor. I need you to let the new coach establish himself or herself.

“Remember, when you guys first signed up for track and field ... you just kind of looked up and said 'Who’s this old man talking to me?' It took a while to develop that bridge of trust (on both sides). Over time, that bridge of trust allows you to do your workouts without any concern of, is that what we should be doing? I think the kids took it to heart. I’ll be around, but I’ll also have a chance to see some of my kids currently competing in college, but I’m sort of going to put on my stealth jacket and blend into the woodwork.”