It’s almost like the restaurant at 3720 Lake Shore Road is trying not to get your hopes up, starting with the name.

Generations ago, when Bethlehem Steel was cranking just up the street, it was Armondo’s. Steelworkers roomed upstairs. Later Champagne Theatre would put on Neil Simon comedies there. But that couldn’t last forever. It would become J.L. Crithens, then the Coach’s Den, Tadora’s and a film location in Vincent Gallo feature-length raspberry to his hometown, “Buffalo '66.”

Now it bears a moniker synonymous with economic decline and population flight. The Rust Belt Bar & Grill sounds like a suitable location to get reacquainted with the fact that alcohol is a depressant.

Nothing about the holed parking lot or battered entranceway would suggest otherwise. Once you get through the doorway and sit down, though, the surprises start adding up. Everything is just a little nicer than the setting had led me to expect. 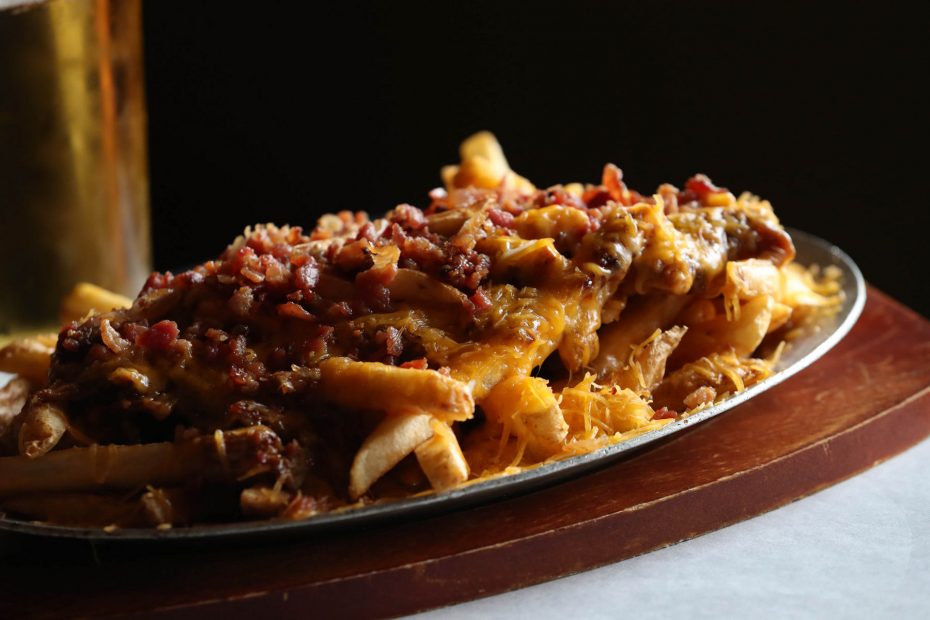 The introduction was rocky. I spent my first five minutes in Rust Belt standing next to the hostess stand, as the sign instructed, before being acknowledged. It gave me time to admire an interior done in cool chartreuse and cream tones, with an exposed old-school wooden floor.

There’s plenty of room between tables, which bear paper topcovers over dark tablecloths. Centerpieces include miniature wooden pallets, echoing a full-sized version mounted on the wall for a bit of industrial warehouse chic.

The menus carry on the industrial motif with Lewis Hine’s “powerhouse mechanic working on steam pump” and the turbine house of a Maryland hydroelectric dam.

Dam good food? Better than I had any right to expect across the street from the Ford plant. A petite loaf of warm bread showed up with herbed oil. The crust was crackling hello. A stiff Tanqueray and tonic was $5. Things were looking up.

Rust Belt Fries ($12, pictured above) were loaded french fries that went beyond mundane by piling it on with pulled pork, cheddar cheese, gravy and bacon. Not breaking any new ground, but one-upping poutine in the bacon department, for a plate that got passed around the table until empty.

Drunken mussels ($12) gave the stodgy bivalves a rousing makeover. Spicy poblano cream lit up a beer-based broth savory with onion and chorizo sausage, and we put the proffered grilled bread to work on sop-up duty.

Fried goat cheese with pear ($11) brought three generous cheese discs that had been rolled in crumbs. They were adeptly fried to a crisp, but needed more cinnamon-scented fresh pear slices to balance out all that chevre. Lashings of balsamic glaze didn’t make up the difference. 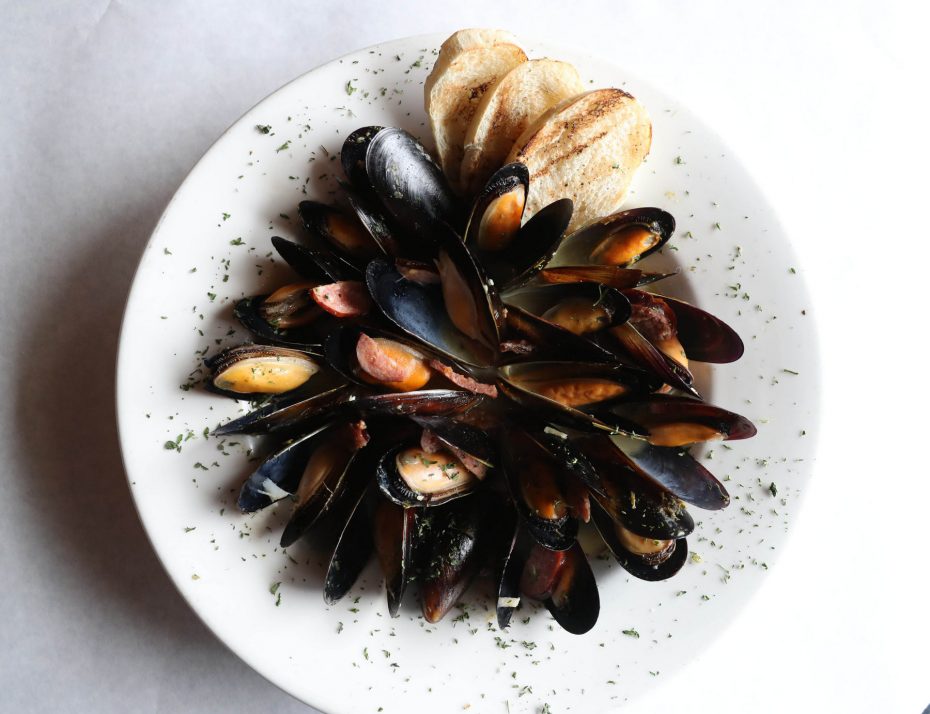 The cheese cap on the French onion soup was crusty and thick, but its flavor was shallow as a bouillon cube. More satisfying was a creamy stuffed hot pepper soup, luxuriously creamy with a mixture of cheeses, fortified with shreds of chicken and a bracing lick of heat from banana peppers.

A shaved prime rib flatbread ($13) was a bit of a letdown. The beef was thin and leathery, and the Gorgonzola and balsamic glaze couldn’t make up for its desiccated nature.

The server assured me the popcorn shrimp ($12) were breaded in-house. He was mistaken. The chewy-jacketed frozen factory product raised an eyebrow for the rest of the meal, but the misrepresentation was an exception. 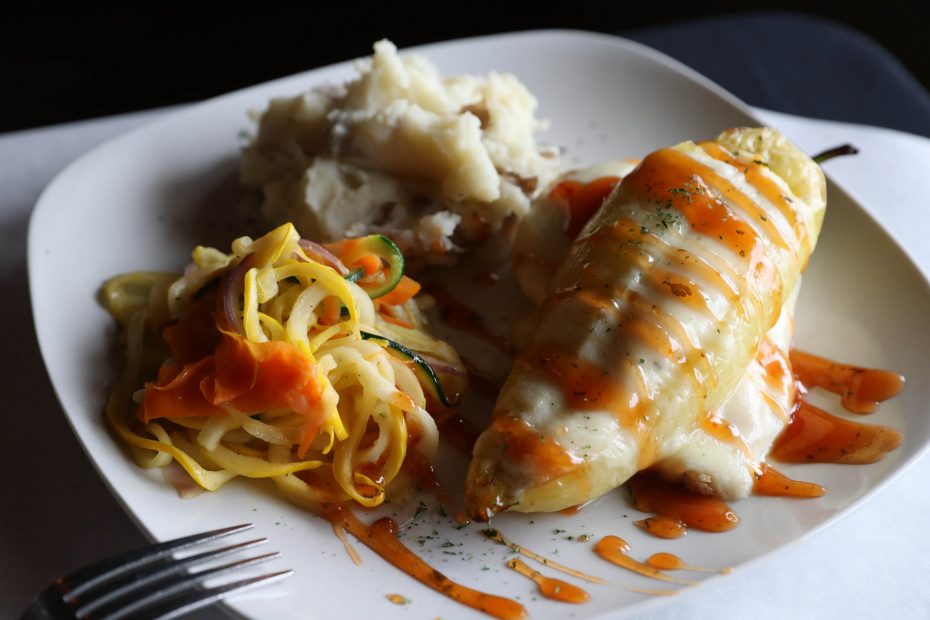 Entrees were more consistent. My favorite was the inferno chicken ($16), an admirably moist butterflied chicken breast amplified with a whole stuffed pepper under a quilt of provolone, sluiced with a gingery garlicky sweet chile sauce that threw sparks of heat and flavor.

The most expensive dish on the Rust Belt menu was a 20-ounce porterhouse, a solid beefsteak option at $26. Arriving at an accurate medium, the full-flavored cow slice was accompanied by peel-on mashed potatoes and a squash-carrot medley.

Classic carbonara ($16) from the specials menu was more like Americanized alfredo, with lots of cheese and cream, punctuated with bits of pork. (Italians will tell you neither should involve cream.) Despite the misnomer, the mess of spaghetti still satisfied in its goopy glory. 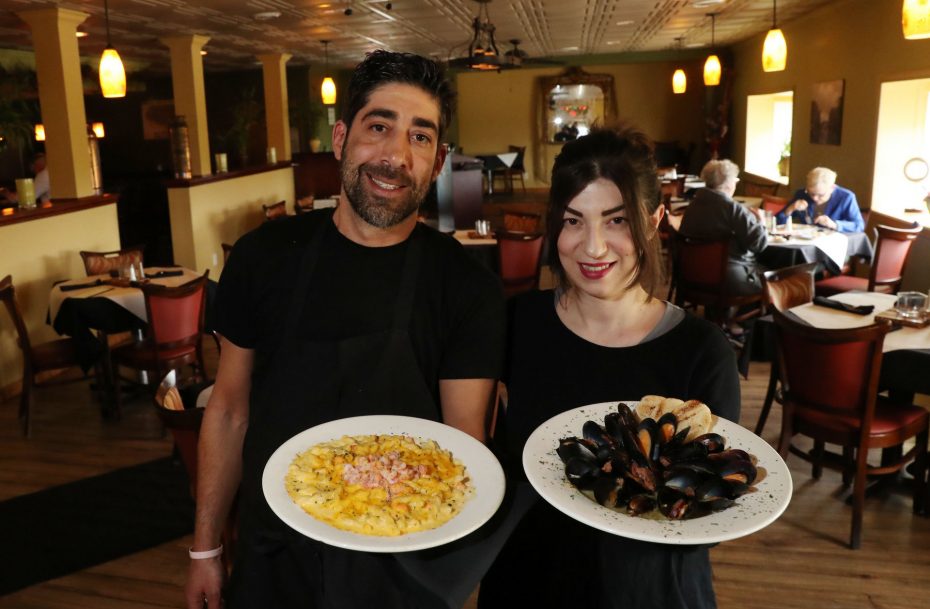 Seafood cioppino ($24) was a mixture of haddock, shrimp, scallops, mussels and clams in a loose tomato sauce. The seafood was plentiful and fresh, but the ketchup-like sweetness of the broth detracted from my enjoyment of a decent school of seafood.

Lobster macaroni and cheese ($20) was a whompin’ good dish of firm gemelli pasta and stretchy stringed cheese fortified with enough tidbits of lobster meat to make a difference. 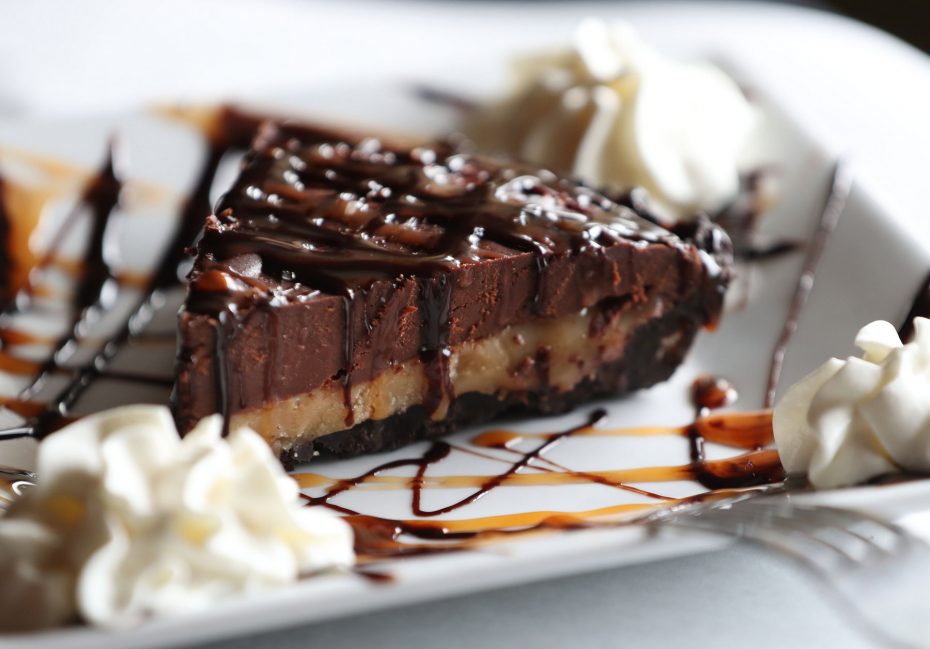 Later I noticed that Rust Belt offers $10 entrees on Tuesdays, and $19 four-course meals on Mondays, which I would consider dining bargains for food of this quality. My journey to dining satisfaction at Rust Belt had to navigate some potholes, but in the end, unlike Mr. Gallo, I found value in returning.