It was Lourdes Gurriel Jr. bobblehead giveaway day in Toronto, and the man himself was in a dugout in Syracuse, demoted a week earlier to the Triple-A Buffalo Bisons.

The 25-year-old Gurriel opened the season as the Blue Jays’ starting second baseman. But he hit just .175 through 13 games and was benched during an April 15 loss to Tampa after committing a throwing error on a routine throw to first for the second consecutive day.

Soon, the top prospect was packing his belongings.

“Every player, when they bring you to the office and tell you you’ve got to go down, you feel a little different,” Gurriel said in Spanish after fielding drills last week in Buffalo. “But on the same token, it’s no different. It’s playing baseball.”

Gurriel, who defected from Cuba in 2016 and was named American League rookie of the month in July 2018, was translated by Danny Solano, the Blue Jays’ minor league infield coordinator. 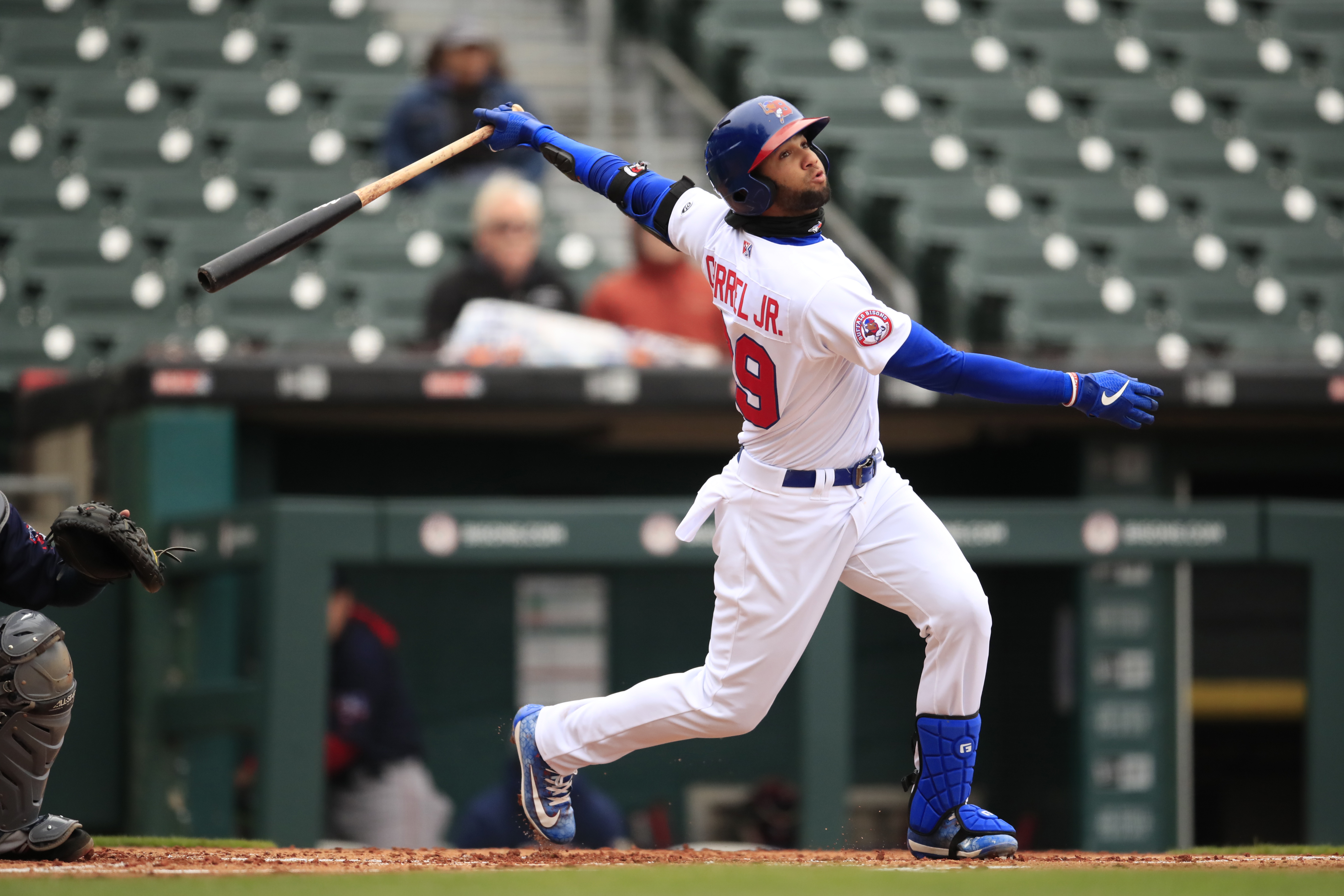 Gurriel has spent the bulk of his games at second base since his demotion to Buffalo. He’s spent nine games at the keystone, three at shortstop and has started playing in the outfield, where the Blue Jays intend to get him additional work to improve his versatility. That should provide another avenue for Gurriel to contribute to the big league team. Gurriel last played in the outfield during the 2015-16 season in Cuba, where he spent 40 games in left field.

Gurriel said the Jays sent him to Buffalo to build his confidence, and Bisons manager Bobby Meacham said that begins with focusing on mechanics.

“We work on specific things that we know guys need to work on,” Meacham said. “For him, it’s a lot about his footwork and his throwing all working together. Once we get that in sync. Feet are important to everything you do, whether it’s hitting or throwing or fielding, so we’re trying to make sure his footwork is working together with glove and his arm as he comes up to throw and everything feels like it’s in sync, so we can remain consistent out there in the field.

“Basically, it’s just a lot of practice. Just like everything else we do, we get better at it and have more confidence in it because we practice it and it just becomes muscle memory.” 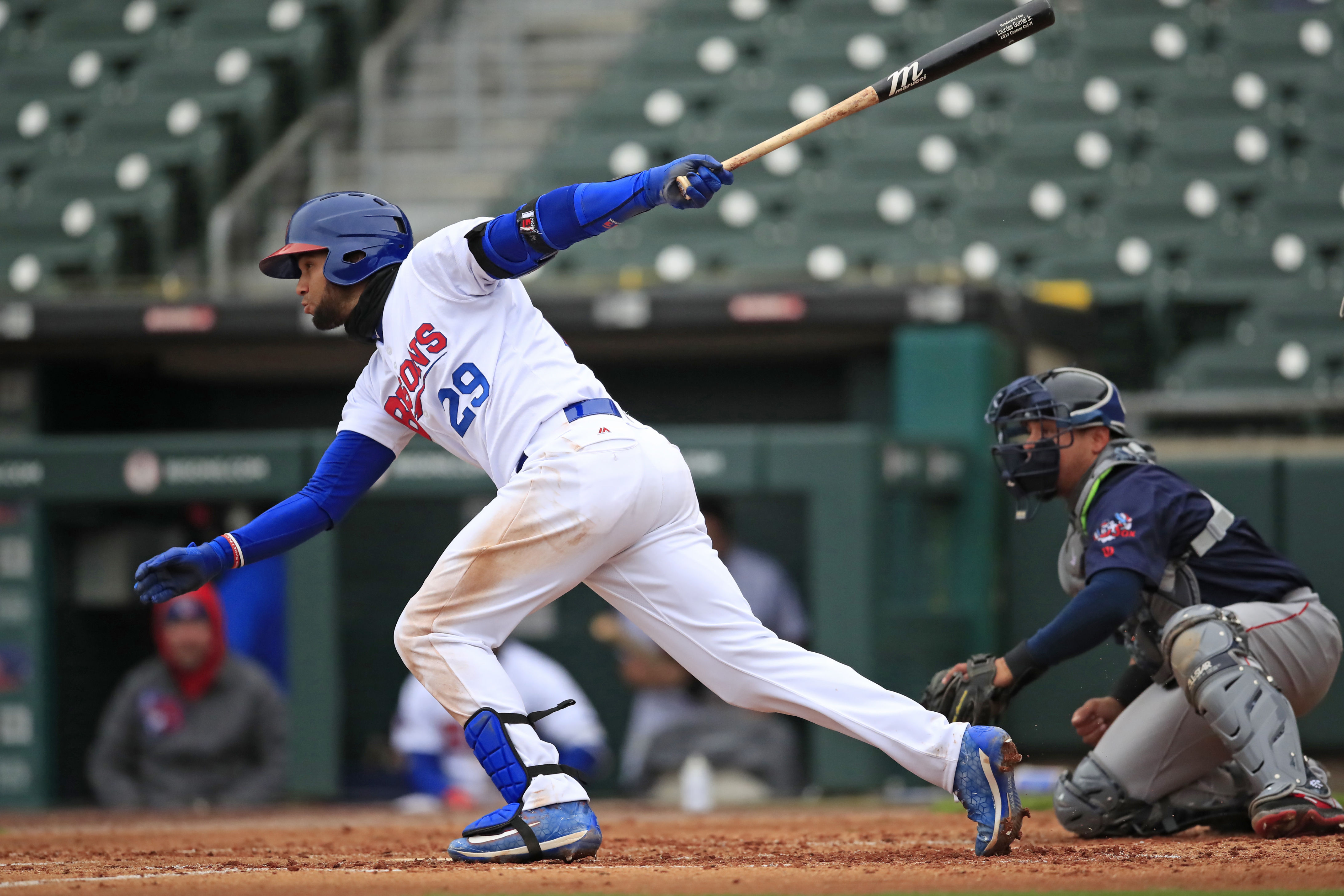 Gurriel’s playing time at second base has often displaced fellow top prospect Cavan Biggio, who has taken turns at first base, third base and the outfield.

“I think it’s been good,” Biggio said, “just because that’s what it’s going to be like if I get the chance to go to Toronto this year. We’ve got a lot of good infielders up there right now, and having Gurriel on the team, he plays mainly second and a little bit of shortstop, so I think it’s good for me to kind of see how Gurriel is going to play second base and now I’m going to have to play first, third or outfield. So I think it’s a nice little precursor to what might happen.”

Biggio and Gurriel have been teammates at times throughout their minor league careers, in High-A and Double-A before sharing the dugout in Buffalo.

“I know he’s struggled a little bit this year,” Biggio said, “but when he first came to Toronto, he was out of Cuba. I think he’s come a long way, infield-wise. It’s just all a credit to his work ethic. The first time I saw him take ground balls in spring training in 2016, he was out there taking ground balls with three groups. And usually you only take it with one group. You can just tell that he was trying to get the feel for it. And then the next year in Double-A, I could kind of see the progress he made and he’s continued to do that.

“Obviously, he had a little trouble with throwing. He works at it. He’ll take a million ground balls and fire over to first and hit me in the chest every single time. So I think something like that is kind of hard to manage, but you’ve just got to keep practicing and getting a feel for it. And that’s what he’s been doing.” 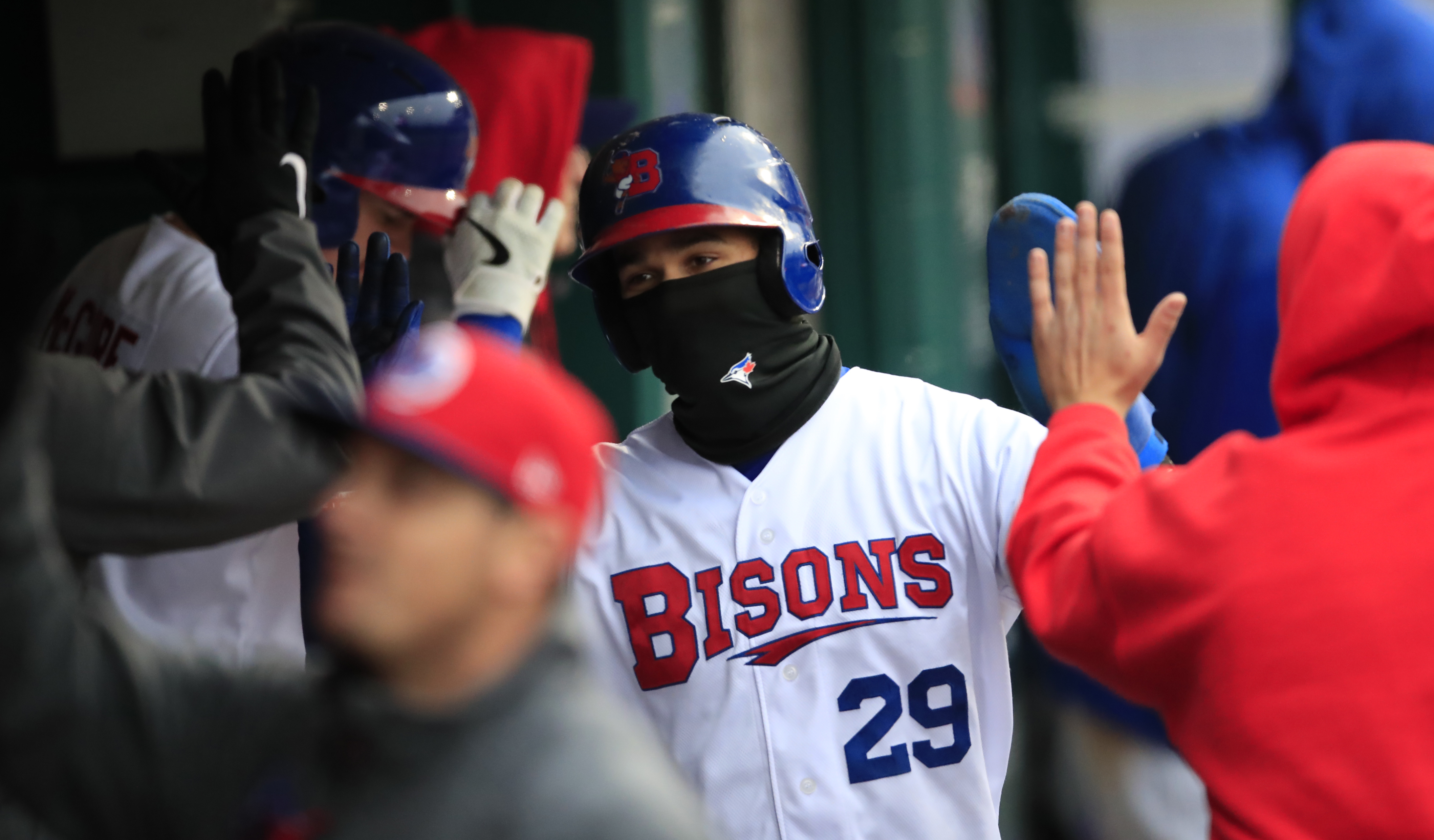 Buffalo Bisons player Lourdes Gurriel Jr. is congratulated on his run scored against the Pawtucket Red Sox in the fourth inning at Sahlen Field on April 29. (Harry Scull Jr./Buffalo News)

Gurriel began to heat up this season after an early slump at the plate, going 5 for 13 over his final five games in Toronto. He has been excellent in Triple A this season, hitting .353 with eight doubles, four homers and 21 RBIs in his first 17 games.

But aside from a penchant for strikeouts and few walks, and that slow start at the plate this season, his bat had rarely been a problem.

In 65 games last year in Toronto, Gurriel had a .281 batting average with eight doubles, 11 homers and 35 RBIs in 249 at bats. It was more than adequate production for his first taste of the big leagues. Perhaps even bobblehead-worthy.

But this year was different. The Jays could afford to let Gurriel work through his struggles at the plate. But they had little tolerance for what became a clear liability at second base.

“It’s a young kid struggling mentally with his throwing right now,” Blue Jays manager Charlie Montoyo told reporters on April 15, after Gurriel’s second throwing error in as many games. “We’ve got to be careful with that. The future is bright with Gurriel, so we don’t want to make it even worse … that’s why we took him out.”

Gurriel was loose and having fun as he danced to music during batting practice last week in Buffalo.

“He doesn’t feel different here than in Toronto,” Solano said. “One thing he tries to do all the time is enjoy the time over here.”

Meacham said he’s unsure how long Gurriel will spend with the Bisons before he’s ready to rejoin the Blue Jays.

“That’s not up to me,” Meacham said. “But I just want to see a player that’s confident in what he’s doing, consistently able to repeat over and over and over, whether it’s a swing or an approach at the plate or how he’s going to turn double plays.”

Meacham is happy with Gurriel’s attitude.

“He’s a hard-working guy, always. No matter what,” Meacham said. “He loves playing the game, loves being part of a team that wins. He was here last year for a bit. … He’s a winning ballplayer. I’m glad to have him for a moment. I’m sure it won’t be that long, though.”

Gurriel said the Blue Jays set aside one of his bobbleheads.

It’s waiting for him when he gets back.