Joe Cecconi laughed and acknowledged he had never thought much about the mileage he racked up driving from Youngstown to the University of Michigan to watch his grandson, former Wolverines captain Joseph Cecconi, play hockey.

So he did some quick math in his head. Before playing four years in Ann Arbor, Joseph spent almost two seasons with the Muskegon Lumberjacks, a junior team in the United States Hockey League.

The elder Cecconi attended nearly every home game and road contests within a reasonable driving distance. So he calculated he traveled around 30,000 miles a year.

“Something like that,” said Cecconi, who was often accompanied by his wife, Patsy, and daughter, Mary Jo.

The mileage wasn’t a big deal to Cecconi, 81, who retired in 2006 after selling the Niagara Falls car dealership that still bears his name. He considers himself lucky he had the time, health and financial ability to make so many trips.

“I think I’m the only one who has someone who comes five hours or more for pretty much every single game,” said Joseph, a Dallas Stars defense prospect who began his pro career in March. “I know my mom and dad would love to do that, but they just can’t because of their work schedule.”

Last week, Joe drove to Ann Arbor for the final time. This trip, however, was to watch Joseph graduate with a bachelor’s degree in general studies.

“I’m pretty much aware of that fact it’s over this year,” Joe said of the nearly 300-mile, five-hour trip to Ann Arbor. “I’m trying to think of what I’m going to fill the void with next year.” 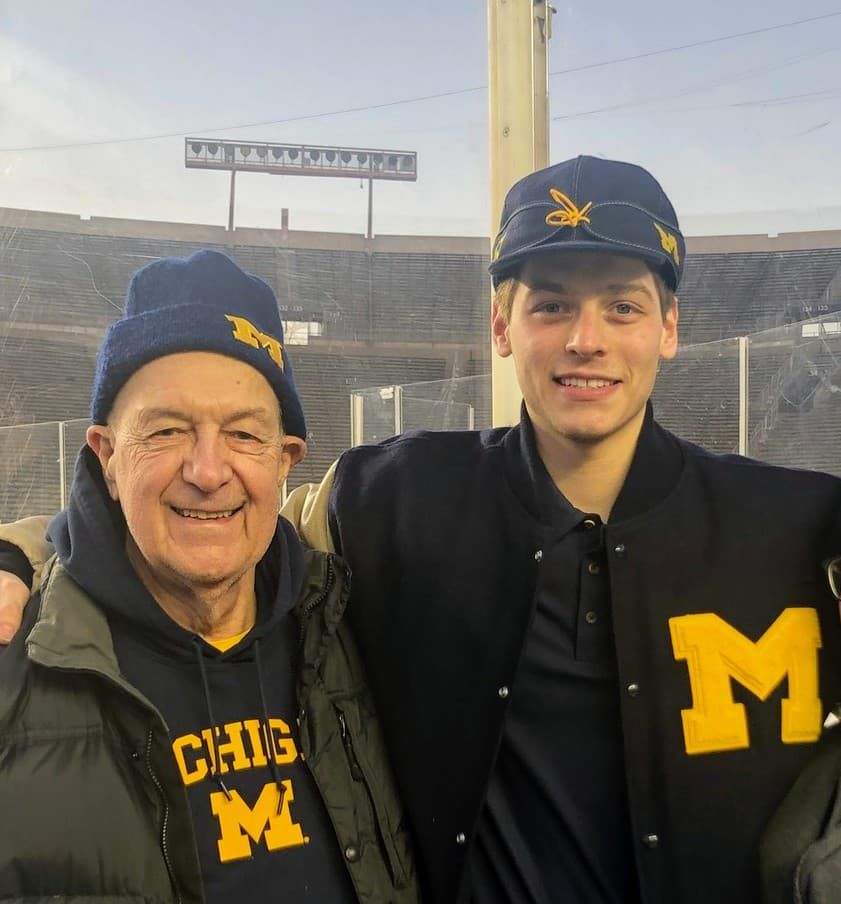 Since Joseph will likely play next season with Dallas’ American Hockey League affiliate in Austin, he would have about a 1,600-mile, 24-hour drive to Texas.

“When he plays Grand Rapids, I will go, because I’ve made that trip many times,” said Joe, who prefers driving over flying.

Lots of grandparents, of course, travel to watch their grandchild play NCAA hockey. But why did he attend virtually every game he could?

“I really don’t know how to answer that question,” he said. “It’s just something I decided to do. I can’t put into words what the real reason would be for that.”

Joseph, 21, has always been close to his grandfather, who lives five minutes away in Youngstown.

“I have more of a relationship than most kids have with their grandparents,” Joseph said.

He added: “He’s the type of guy who does things the right way. I hope that I can become the man that he is right now, because everyone loves him.”

The Cecconis developed a routine during the visits. Before each game, Joe would pore over sports quotes, find an inspirational one and text it to his grandson.

“To get that from a person you care so much about, (it adds) just that little extra confidence,” Joseph said.

Joseph and his visitors would go out to dinner following games and have breakfast together Sunday morning before everyone left. Joe said he found the best hamburgers he has ever tasted at a restaurant called The Station in Muskegon.

“He loves coming down,” Joseph said. “He knows the coaches, he knows everyone who works at the hotel. … He knows the ladies who work at all the stores he goes to with my aunt to buy her the Michigan apparel and stuff.

“He’s made a lot of friends in Ann Arbor, so I think that’s the real reason he came down so much.”

While Joe experienced what he called some “nasty snowstorms” around Muskegon, he said he was “extremely fortunate in the weather department.”

He knows being a fixture at Yost Ice Arena, Michigan’s home rink, and visiting other venues means something.

“I think that having his grandfather in the stands is very reassuring for him,” Joe said.

The 6-foot-2, 205-pound Joseph Cecconi, a fifth-round pick by Dallas in 2015 (133rd overall) has developed into a strong pro hockey prospect.

“I’m a two-way defenseman,” he said. “I pretty much lock down in the D-zone. I take a lot of pride in that. That is my biggest strength. But I would say I move pucks very well, I can contribute offensively.”

Following a terrific junior season in which he compiled five goals and 27 points in 40 games as Michigan roared to the Frozen Four, Cecconi said the Stars wanted to sign him.

Cecconi said he “respectfully declined” because he “felt like I owed it to my teammates to stay four years.”

“I wanted to go back and try to win a national championship at Michigan, earn my degree so I could get that out of the way and also just play at a school I love for just one more year,” he said.

“A lot of the games I was embarrassed at the outcomes,” said Cecconi, who won a gold medal with Team USA’s 2017 World Junior Champion squad. “I was not very happy with myself. I wanted to be a captain of a winning team, a team that would go very far.”

After his senior season ended, Cecconi, who recently underwent shoulder surgery, said he wasn’t sure of his next step. He said he didn’t think about becoming a free agent during the summer.

Cecconi signed a two-year, entry-level contract March 19. When he joined Texas on a professional tryout, he expected he would make a few appearances.

Instead, the Stars threw him right into the lineup, playing him the final eight games.

“Having them just say, ‘OK, you’re going in, you’re playing,’ gave me a lot of confidence, because they didn’t want to make me practice for a week or kind of make me get around the guys, get more comfortable,’” Cecconi said. “They were like, ‘We have faith in this guy, we signed him for a reason.’”