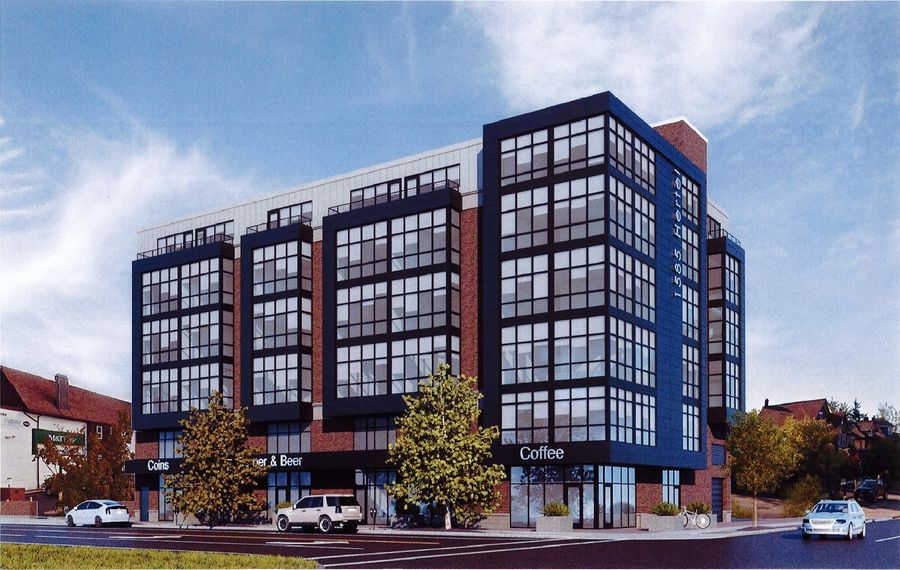 Construction kicked off Friday on a five-story building on Hertel Avenue in North Buffalo, while the developers of the Silos at Elk Street project formally opened their renovation project in the city's Valley neighborhood.

The two projects represent a total of $9 million in development, bringing apartments, retail storefronts and office space to the two communities.

"By developing new housing and commercial space with easy access to public transportation, we are attracting new residents and businesses to the area, creating sustainable, long-term growth for the entire Western New York region," Gov. Andrew M. Cuomo said in a news release for the Hertel project.

John and Ruthann Daly are investing $7 million for their project at 1585 Hertel, replacing a former gas station and brownfield with the mixed-use building, which includes underground parking, first-floor space for two restaurants and a boutique shop, and 34 apartments on the four upper floors. The affordable apartments will range from 500 to 1,055 square feet, and rents will be set at or below market-rate. One is handicapped accessible.

The building, whose facade will feature a mix of red brick, stone and metal, will also include a partial green roof, bike storage and dog-washing areas. Construction is expected to finish by 2020.

Developer plans changes to five-story project at Hertel and Parkside

"We are so proud to replace an old defunct brownfield site with this new vibrant mixed-use development," the Dalys said in the news release. "We hope this is the catalyst for more investment in our community."

Located at the corner of Hertel and Parkside avenues, the project is supported with a $500,000  grant from the state's Better Buffalo Fund, through the Buffalo Main Street Initiative, which is modeled after the New York Main Street program that invests in projects that will revitalize downtown commercial districts across the state.

The grant was obtained by the North Buffalo Organization, a neighborhood group that "initiates and implements projects that support, sustain and improve the community's quality of life," according to the release. Daly, principal of developer O'Dalaigh Real Estate LLC, is managing principal at Trautman Associates, which is the project architect.

The $30 million Better Buffalo Fund, part of the Buffalo Billion initiative, provides grants to revive neighborhood commercial districts while encouraging more density and growth along major transportation routes. The goal is to encourage walkability and alternative means of transportation. To date, the fund has given more than $30 million to 47 projects that are renovating over 681 residential units and more than 345,000 square feet of retail and commercial space. Private investment in these projects totals $308 million.

While that project is beginning, architectural firm Young + Wright completed its $2 million renovation of the abandoned former Buffalo Malting Corp. complex at 50 Elk St., which is now the firm's new headquarters, with 17,265 square feet of commercial space and two market-rate apartments. The complex features a two-story brick building and grain silos, with exposed ductwork, brick walls and ceilings, giant seeping tanks turned into conference rooms, historic industrial sliding doors serving as entrees to smaller telephone rooms, a historic timeline of the building's history, an old "man-lift" elevator, a staircase-to-nowhere, and a host of preserved malting equipment.

The project was funded with $76,076 in sales tax breaks and $7,500 in mortgage recording tax savings, plus reduced property taxes for 12 years. It also received $500,000 in brownfield tax credits, historic tax credits and a $300,000 National Grid grant.

After 30 years of abandonment, grain elevator getting new life as offices