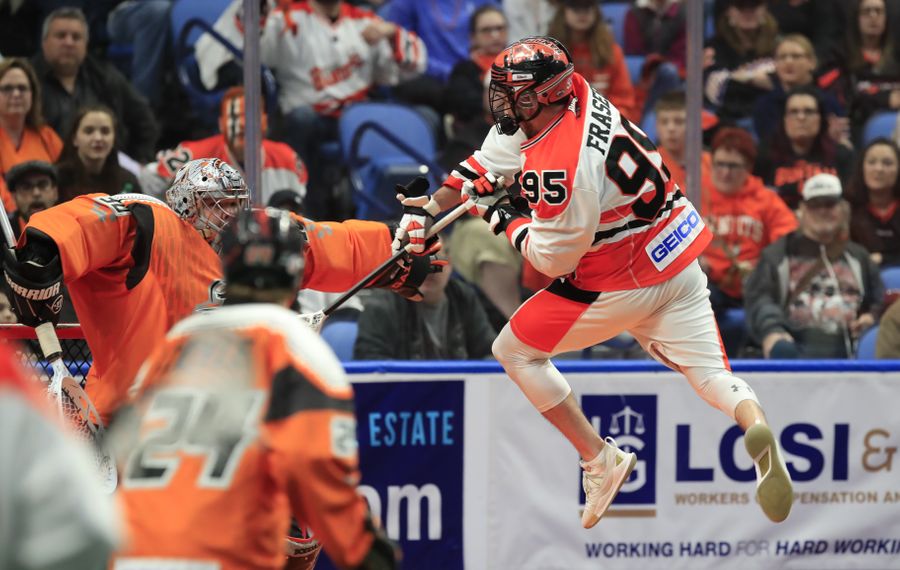 Although the Buffalo Bandits entered the postseason with the National Lacrosse League’s best record, they still had a lot to prove in the eyes of coach Rich Kilgour.

“Being in a ‘one and done’ game means that we have everything to prove,” he said after the Bandits’ pre-game shootaround Saturday morning. “We have 60 minutes to prove that we’re good enough to go on to the next round. ... All it takes is one bad night and there is no tomorrow.”

There will be a tomorrow in Banditland.

Dhane Smith, Shawn Evans and the rest of the Bandits saw to it, making sure the team’s first playoff appearance in two years wasn’t a short one.

The Bandits seized control early and never let up against New England, as they routed the Black Wolves, 13-6, in a first-round NLL East Division playoff contest at KeyBank Center. Smith finished with two goals and five assists for a seven-point night. Evans scored three times, completing his hat trick early in the fourth quarter, and notched a helper. Corey Small recorded two goals and two assists.

With the win the Bandits advanced to the division final where they will host either the Georgia Swarm or Toronto Rock at 7:30 p.m. next Saturday at KeyBank Center. Toronto and Georgia play Monday.

This was the third time the Bandits have beaten New England this season. They won by scores of 15-5 and 12-6 in the other meetings.

The cliche of “it’s hard to beat a team three times” proved to be nothing but words as Buffalo scored four of the first five goals in the opening quarter, with Ian MacKay scoring just 45 seconds into the game as the crowd of 11,776 was just getting settled in its seats.

The Bandits led 7-3 at halftime, with Smith’s second goal coming off a sweet hidden-ball trick in which another player acted as if he had the ball when Smith unleash a blistering shot.

Small scored the first of his two second-half goals early in the third quarter to make it 8-3.

Trailing 11-6, the Black Wolves turned to extra-attacker mode with lots of time left in the fourth but Nick Weiss scored on the empty net with 4:05 left.

Matt Vinc made 47 saves for the win.