Nineteenth-century American poet Emily Dickinson once wrote a poem about Saturday afternoon, in which boys and girls "ecstatically" leaped into the "only afternoon that prison doesn't keep."

Like Dickinson knows, and you know, and we know, a mild jean-jacket-weather May afternoon can't go to waste. For this weekend, our itinerary focuses on quaint East Aurora. As a village, it feels like everything is coordinated. Often a hodge-podge of signs and styles, semi-rural villages usually seem like mix-and-matched grab bags of old American architecture, last-century renovations and modern builds.

But it's like East Aurora decided as a whole that Elbert Hubbard's iconic Roycroft font would be utilized in all signs and, in general, rule their village's general lifestyle, one that is classic and mildly indulgent, while remaining modest.

Weather: Expect a cloudy afternoon with a high temperature of 57 degrees. Showers are possible, but don't let that keep you from ecstatically leaping.

Since 1901, Meibohm Fine Arts (478 Main St., East Aurora) has been a purveyor of art to the Buffalo region. Originally on the city's West Side, the gallery moved to East Aurora in 1957 where it stands today, highlighting local artists and works rife in historical significance. On view through May 25 is Jane Foley Ferraro's Horizons. Ferraro uses cold wax and oil in her paintings, which are mostly colored with muted, earth tones and depicts all kinds of horizon lines.

In East Aurora-based artist Alixandra Martin's gallery, Redfish Art Studios (21 Elm St., East Aurora), her imaginative, colorful paintings hang on the walls along with the textile work of Tami Selph and Denise Christopher. Located in a former creamery, the gallery's farmhouse-style bones -- old hardwood floors and white walls -- interact with the contemporary, vivid paintings to create a casual, inviting gallery space distinct from other similar spaces, and not one that could never be considered stuffy.

[Related: Choose your own adventure for an East Aurora date] 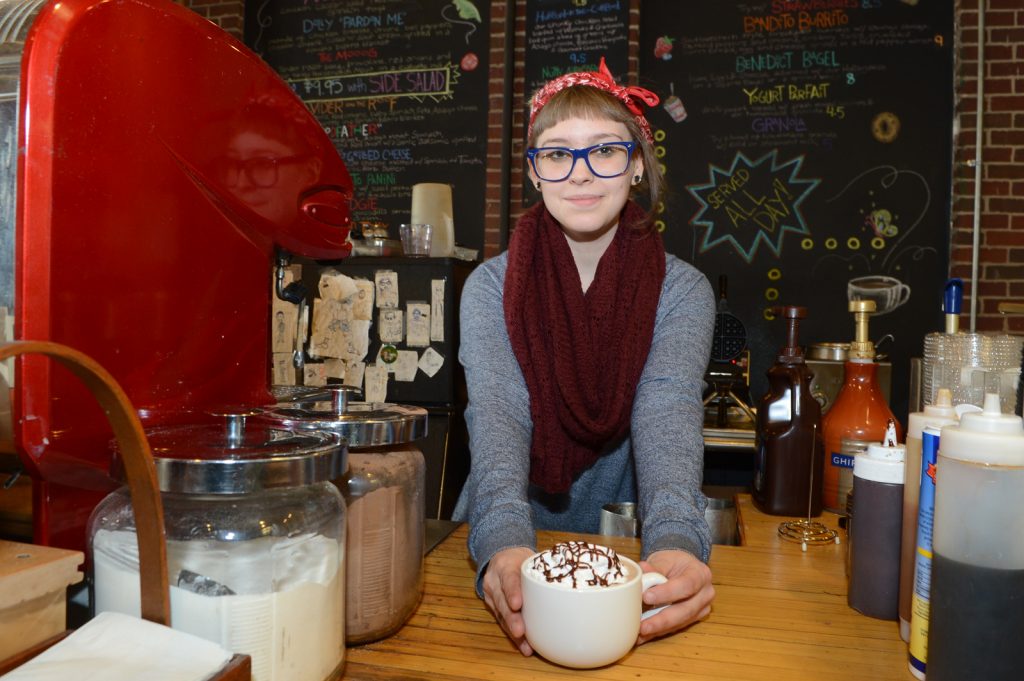 Now you'll be able to drink your hot chocolate on the patio at Taste in East Aurora, if the skies clear up this Saturday. (Nancy J. Parisi/Special to the News)

You'll first notice Taste Bistro & Coffee Bar (634 Main St., East Aurora) from its interactive sign -- a giant coffee cup reminiscent of the iconic "Friends" cafe. The three-dimensional sign, that actually generates steam, juts from the front of the cafe. Inside of an old grain mill, East Aurora's homegrown coffee shop recently got approved for its outdoor seating permit, so if the skies clear up, sip espresso in the alleyway, among colorful public pop art. Choose your drink from a standard European espresso menu and tea list, or indulge in a frozen latte, smoothie or chocolatey latte.

When you think of East Aurora parks, Knox Farm and its red barn, sprawling fields and dog park likely come to mind. But don't sleep on Majors Park (441 Olean Road, East Aurora), which is a smaller, quieter slice of nature replete with a long, winding boardwalk and an idyllic creek. Hike its wooden runway or venture off-the-beaten-path while enjoying a day of perfect Goldilocks temperatures.

Visit 189 (189 Main St., East Aurora) for a burger -- its specialty -- or for an upscale American bar dish, such as Brussel sprouts tossed in Buffalo sauce and topped with blue cheese, or a roasted sweet potato salad. Its on-trend, brick interior is reminiscent of an old ski lodge-meets-garage, with license plates as decorations and high ceilings. If you're a Kentucky Derby fan, or large fancy hat fan, stick around to watch the horses race on the bar's projector screen and sip on a mint julep or two, or several, because when else would you drink a mint julep?

Related: More in our series

How to spend a Saturday afternoon: the oldest tree in Buffalo, Buen Vivir Gallery, Grindhaus, Rowhouse

How to spend a Saturday afternoon in Lewiston