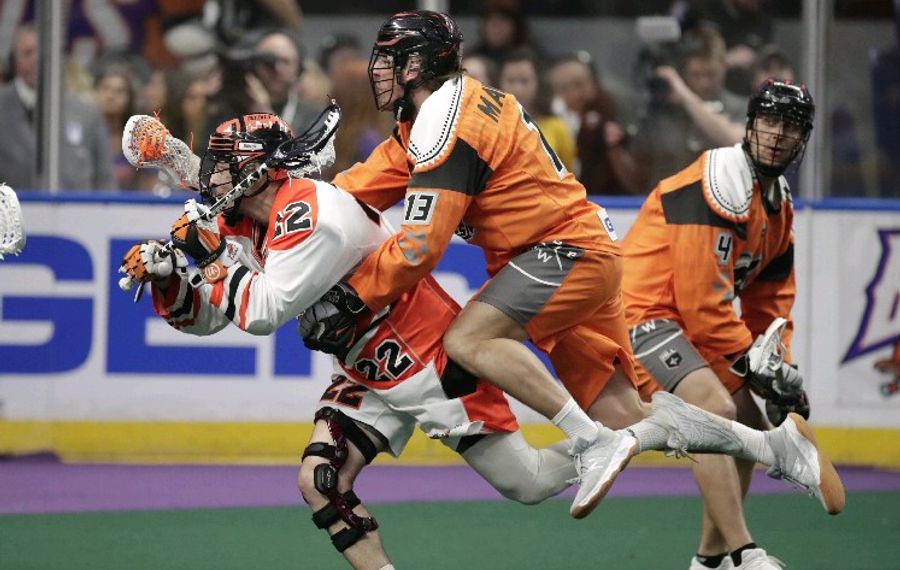 Racking up 63 points and earning a spot on the National Lacrosse League’s All-Rookie team are two big ways to make a splash in your first professional season, but for the Bandits’ Josh Byrne, it was just the beginning.

“I thought I underachieved last year; I wasn’t happy with the way I ended last year. I was unhappy with how the way teams scouted me, and how they changed things,” Byrne said Friday morning.

But in a 2018-19 season where the Bandits finished with the best record in the National Lacrosse League entering the playoffs that begin tonight at KeyBank Center (7:30 p.m., Radio 1520), Byrne has had a different problem to deal with, a knee injury.

Byrne played only half of the team’s games this season, scoring 13 goals with 29 assists for 42 points.

But as the possibility of a month’s worth of meaningful games looms, Byrne said he was feeling more like his old self.

“It’s definitely a struggle, even when you sit out for one or two more games, you feel a little sluggish or rusty, … it takes a toll on you, realizing from a mental state that it’s going to take a little while to get your timing back,” he said.

He learned last season that teams were growing wise to his style of winning one-on-one battles and started playing off of him to screen him from scoring. Instead of scoring five or six points per game, he was logging just one or two.

Since then, the former number one overall pick from New Westminster, B.C. has been busy improving his craft.

“I’ve been working on not being that one-dimensional player, that guy who can score from the outside,” he said.

Fortunately for the Bandits, Byrne’s injury did not hurt the offense much as his teammates have picked up the slack to the tune of 621 points – 244 goals and 378 assists – easily tops in the league, well ahead of the Georgia Swarm at 594.

Five different Bandits have at least 25 goals this season. Those goals have come from both familiar faces like Dhane Smith as well as new acquisitions like Corey Small, traded to Buffalo from Vancouver last November.

It’s a night and day difference from last season, and Byrne is excited to be a part of it.

“The playoffs are a whole different beast,” he said. “We had a great first season, now we have to translate that to the second season.”

Team chemistry is important to the new-look Bandits. Fans looking for an example of that can look no further than Byrne’s self-titled YouTube channel, where the forward posted a video of himself and his teammates working out together entitled “A Day in the Life.”

Tonight’s Eastern Division playoff game will be the third meeting of the season between the Bandits and Black Wolves, with both previous meetings taken by Buffalo, 15-5 in Connecticut on Jan. 27 and 12-6 in Buffalo on April 20. The last meeting clinched home field advantage throughout the playoffs for the Bandits, who are trying to win their fifth league championship and first in 11 years.