Zoe V. Scruggs is trying on different costume choices to see what works best under the stage lights.

Brian Brown is somewhere behind the curtains, getting a guitar lesson -- his character plays, so he has to learn.

Michelle Thomas sits at the piano, organizing the music, while other performers filter in for an evening rehearsal. Everything is coming together -- which is good, because "Passing Strange" was set to open in just over a week, the inaugural performance in Ujima Theatre Company's brand new home.

The opening is part of a theater season of noteworthy developments, among them Road Less Traveled opening its own new theater, Kavinoky's dramatic remodeling and succession in leadership, Irish Classical transitioning to a new director, ART finding two new stages, Brazen-Faced Varlets settling in at the Main Street Cabaret and Shea's hosting three weeks of "Hamilton."

And now this: Ujima, in its 41st year and one of the city's oldest theater groups, has moved to a newly created theater space in a former elementary school on Buffalo's West Side. The airy black box theater at 429 Plymouth Ave. bears little resemblance to the company's old location above a shop on Elmwood Avenue. For starters, it has a larger stage, more seats (about 140), more parking, and patrons don't have to scale a long flight of stairs before taking their seats.

The performance space is part of PUSH Buffalo's total renovation of School 77, which closed in 2007.  The PUSH business offices also are on the first floor, along with the non-profit Peace of the City after-school program. The project includes solar panels on the roof and affordable apartments for seniors on the second and third floors. (Those seniors will enjoy special deals on Ujima tickets.) 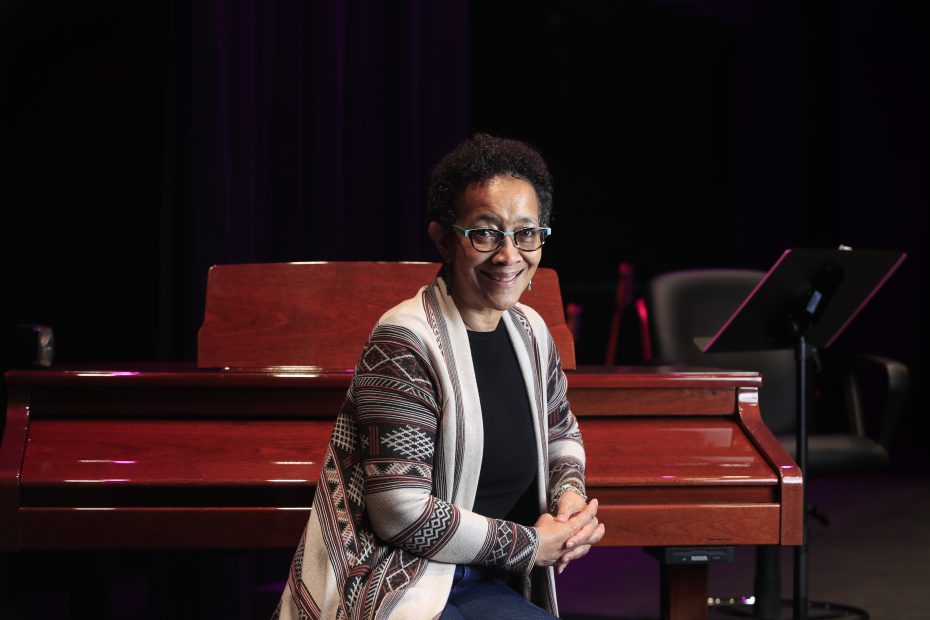 Lorna C. Hill, the founder and artistic director of Ujima Theatre, poses in the company's new performance space in a refurbished school of the West Side. (Harry Scull Jr./Buffalo News)

Ujima had to apply for the theater residency and it turned out to be a perfect fit, according to Rahwa Ghirmatzion, executive director at PUSH. She said that the fact that Ujima was an established theater group and would be able to pay its rent was a good start.

"But they hit all the buttons: they are culturally specific, social justice oriented, they reach people who feel marginalized. ... their work really speaks to that, preserving not just the African American experience, but that of Native Americans, refugees -- all the diversity that exists on the West Side," Ghirmatzion said.

Although the theater was constructed  in the footprint of the school's original auditorium, it was completely remade. The stage and seating areas were flipped, new seats are installed (no creaky wooden seats from the 1920s) and instead of a raised platform stage there is a versatile black box performance area.

While she acknowledges the benefits of having such a fine place to work, Ujima's founder and artistic director Lorna C. Hill said the move is bittersweet. Sitting at the foot of the new risers during the evening's rehearsal, Hill said she sometimes misses the intimate, semi-circular performance area of TheaterLoft, where Ujima presented provocative shows for more than two decades.

Buffalo-born playwright and author Gary Earl Ross was part of that history -- he has had four plays produced there and is a former Ujima board member.

“Ujima is a necessary part of theater in Buffalo,” Ross said, calling it a true professional theater presenting multicultural material. 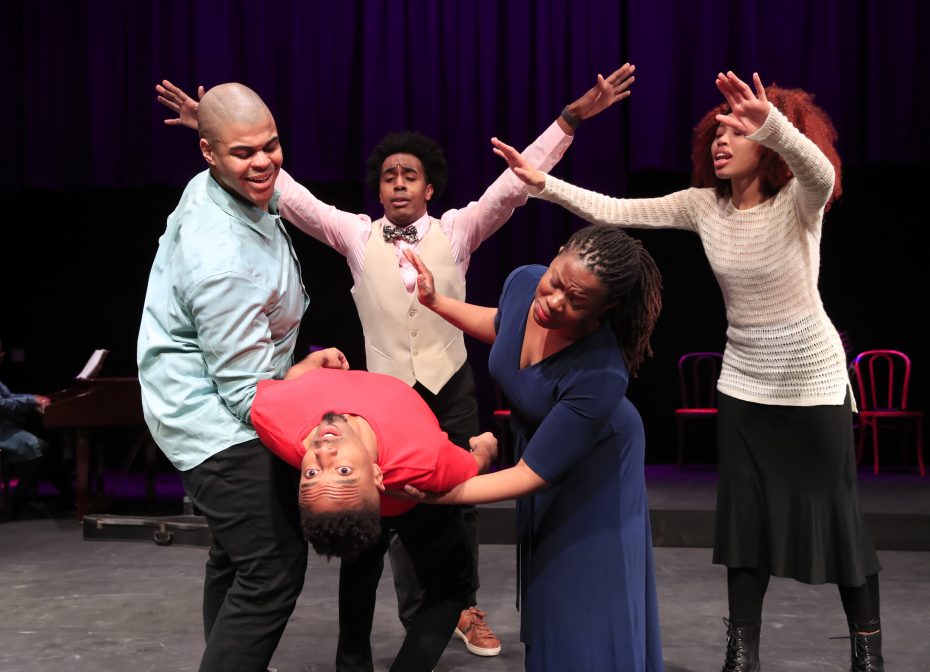 As an African American writer, Ross said he resents that there are so many works in theater and film in which “everything presents black people as problems, not just people.” Ujima explodes those “black people tropes” and even put on one show that satirized them.

“I have worked with and have a lot of admiration for many of our local theater companies,” Ross said, “but the level of respect I have for Ujima is second to none.”

Hill said Theaterloft is operated like it “was our living room,” adding that audiences members embraced that atmosphere. “The expectations were high, and we always had an audience that shares their opinions. I wonder if other theaters get letters from people wanting more dialogue, who want to continue the conversation.”

The interactions and conversations continued on Elmwood until February 2015, when heavy layers of snow and ice on the roof began flooding the second floor rooms, threatening the structure and the safety of its patrons.

"We were literally run out by water," Hill said.

Hallwalls took the company in for the flooded-out show, "Topdog/Underdog," and Ujima became an itinerant company, presenting shows in schools, the Main Street Cabaret and the African American Cultural Center. Performers recently returned from presenting their most recent show, "Free Fred Brown," at the University of Ohio, and local audiences will get to see it again here this summer, Hill said.

"Free Fred Brown" is one of the ways that Ujima kept going while looking for a permanent place to settle. The show, a collaborative story about a young man jailed for illegally hooking up his family's home for electricity, reveals how people of low-income are particularly hard-hit by climate change -- often on top of ongoing racial and economic injustice. 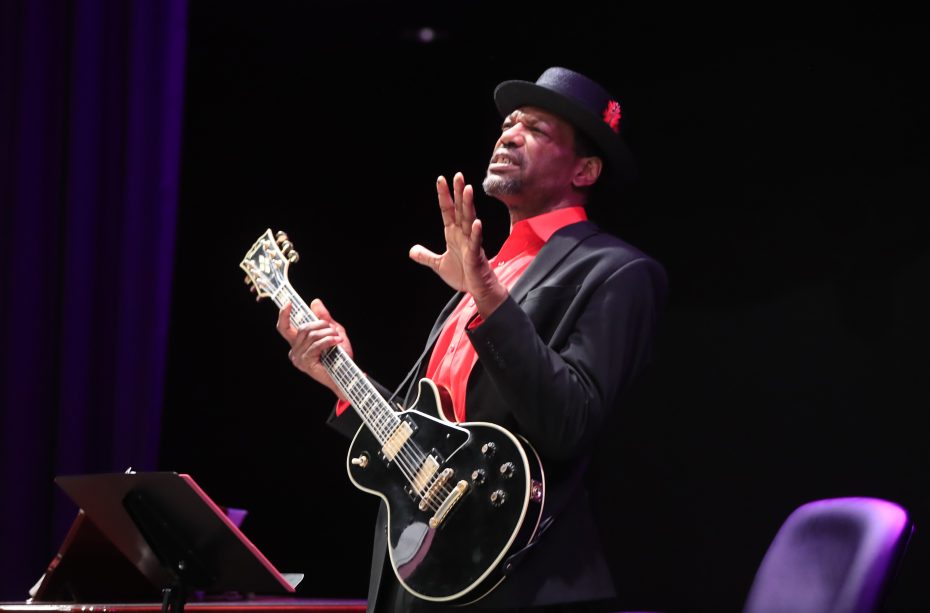 That show and "Passing Strange" fit easily into the mission of Ujima, a mission it has pursued faithfully since its inception: to give theatrical voice to the black community and to recognize the humanity of all cultures. As Hill has said more than once, "We don't do fluff."

Ujima also rarely does musicals, since they are expensive to acquire and produce, but Hill said she couldn't resist taking on "Passing Strange." The funky, bluesy production is an autobiographical story of a young man from Los Angeles who moves to Europe in the 1970s, where his American perspectives on being black, being a man and being himself are turned inside out. Written by the artist Stew, with Heidi Rodewald and Annie Dorsen, the show is comic, emotional and, above all, musical.

Consider it a history lesson for the young performers bringing it so vividly to life in this production, with most of them born long after Stew moved to Berlin and a young Lorna Hill decided to start a theater group. They were even pretty young when Stew took his show to Broadway, where it garnered seven Tony nominations in 2008 and was turned into a film by director Spike Lee. (The New York Post would later call it "the best musical not to win a Tony.")

Hill is excited for the production, and for Ujima's future.

After 40 years, she said, "It's feeling like this is what I'm born to do. I never think of retiring."

And that is despite ongoing bumps in the road -- like being theatrically homeless for four years, having cast members calling from the emergency room minutes before rehearsal and always, always the same two things: "I wish I had more help, I wish I had more money," Hill said with a smile. "It's like a knot on your head, though. You get used to it. It doesn't mean you like it."

The rewards, she said, are in seeing a show come together in an authentic way. She finds working with young people especially satisfying.

"I want to pass along way I know, and the things that only I know," she said. "It is time to challenge ourselves to do work that is even more explicitly controversial, to evaluate how we live and do something about it."

Presented by Ujima Theatre Company May 3 through 26 in its new theater at 429 Plymouth Ave. Entrance is through the doors on the left side of the Plymouth Street parking lot. Showtimes are 7 p.m. Thursday, Friday and Saturday, 4 p.m. Sunday. Tickets are $30, $25 for seniors and $15 for students (ujimacoinc.org or call 281-0092).