The Outer Harbor has a $125 million master plan.

It puts a priority on leisure activities, access to the water, ecological restoration and the site's industrial heritage.

"This is the big picture," said Steven Ranalli, president of Erie Canal harbor Development Corp. "This is what we want to do over the next 20 years."

The little things are not overlooked. Seven washrooms are on the horizon for the 196-acre site that's roughly 10 times the size of Canalside, along with food stands and food truck service.

The cost — which includes millions in environmental cleanup — will require the improvements to be phased in over many years.

The plan encompasses 166 acres centrally located from Bell Slip to Wilkeson Pointe, and 15 acres each around Terminal B at the southern end and the Buffalo River Marina to the north.

The plan will be presented at 5:30 p.m. today at Burchfield Penney Art Center. It draws from waterfront planners and public feedback from stakeholders and the roughly 700 people who participated at open houses in July and November or answered surveys online.

The public will have one last chance to weigh in by answering a survey.

"I think we've done a good job of listening," Ranalli said. "I think we've heard most folks, but I hate to present something to the public and not give them a chance for feedback."

The plan opens the door to the next stage — an environmental review process and a general project plan.

Ranalli anticipates that will be completed in early 2020, when he said the agency will have a clearer idea of what to start with.

The Outer Harbor has $15 million from the state's Buffalo Billion II economic program to launch the plan's first phase. 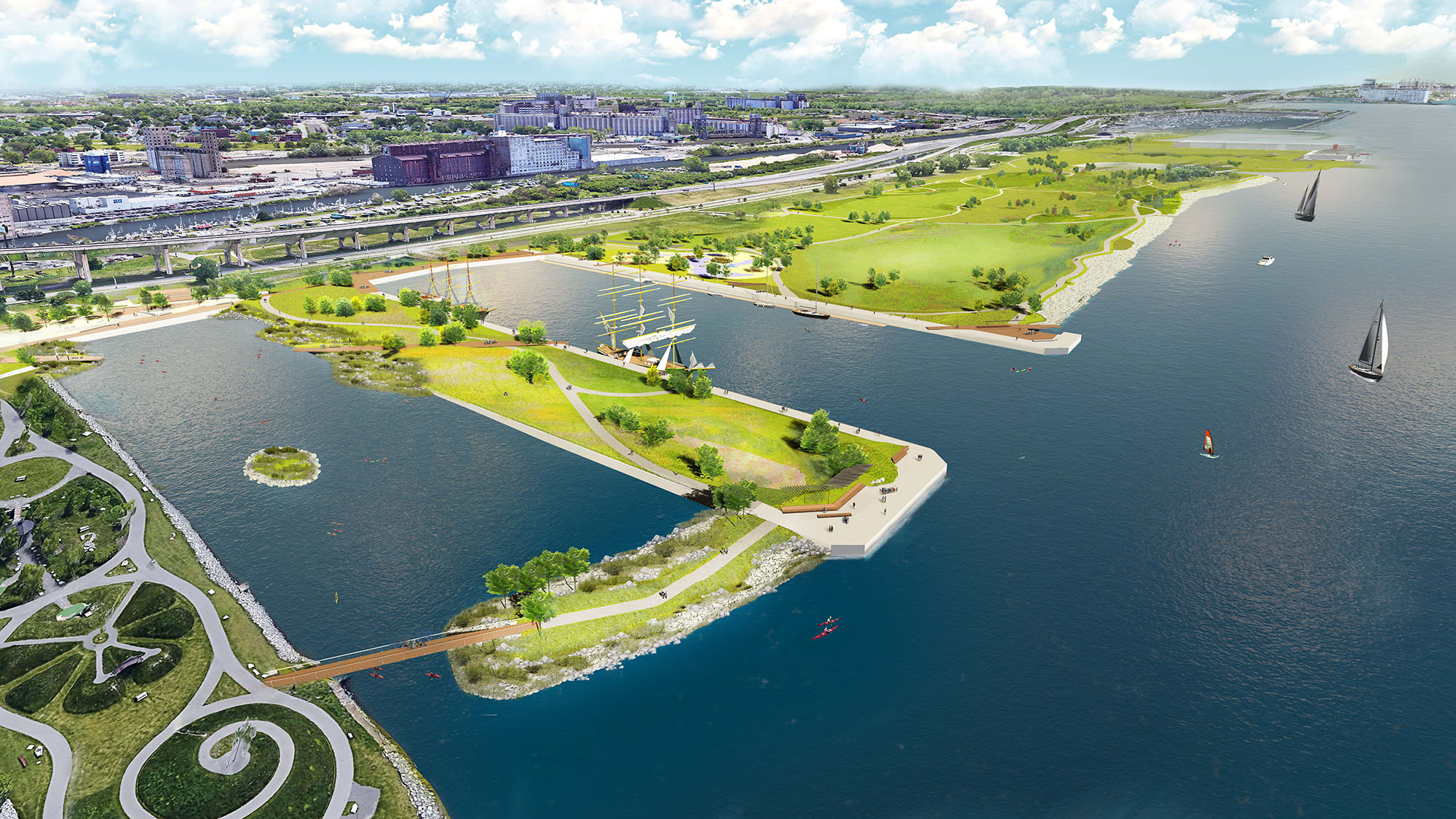 An envisioning of the Buffalo Outer Harbor. (Empire State Development)

The plan comes nearly six years after Gov. Andrew M. Cuomo called for the Outer Harbor to be transferred from the Niagara Frontier Transportation Authority and three years since that transfer to the state was completed.

The area received little investment during the NFTA's decades-long watch.

An early attempt by the waterfront agency to develop the Outer Harbor with dense residential neighborhoods and culture zones drew a sharp rebuke from the public and local politicians, causing the plan to be scuttled.

Erie Canal Harbor Development Corp. then steered a course more aligned with its early critics, and the waterfront agency now sees the Outer Harbor as a largely passive recreation area in contrast to the more built-up Canalside, where development is expected to accelerate over the next several years. The Green Code, which went into effect in January 2017, restricts development to an area at the southern end of the Outer Harbor and at the marina.

Ranalli pointed to a broader vision for the waterfront, reflected in the agency's new website announced Wednesday: buffalowaterfront.com.

"As we build the entire Buffalo waterfront out, there is an urban waterfront with Canalside, a more active, recreational neighborhood-focused Centennial Park and then the more passive regional Outer Harbor," Ranalli said, referring to the Ralph C. Wilson Jr. Centennial Park name soon to replace LaSalle Park.

"I think you're seeing hundreds of acres being redeveloped that are all complementary to one another," Ranalli said. "We are developing miles and miles of waterfront experiences that is really going to be unique to any city."

Closer to the water

Access to the water is a priority in the plan, with softer walking trails, more fishing locations and overlooks, and a small sandy beach near the water at Buffalo River Marina.

Slip 3 would allow kayaks, canoes and fishing, while the deeper Slip 2 would accommodate vessels as big as tall ships and allow for transient boat docks on the southern edge.

"We want to really soften that rocky edge so you can come down and sit along the shore, get your feet in the water, fish and really interact," Ranalli said.

Court sports, trails for bikes and road bikes and fitness stations are part of the recreational opportunities coming to the Outer Harbor.

Demolishing Terminal B, a low-slung, 100,000-square-foot building, posed a dilemma because the building and sea wall were built together, Ranalli said. At the same time, the building has value, as the city's new zoning code no longer allows a building to be put on the water's edge like that and it could eventually be an outdoor venue.

The decision was made to mostly strip it down to its metal frame, with the roof and side walls removed, leaving about one-quarter of the space available for future storage. Stairs are now envisioned to take people up to the second level, where they can have a view of the lake.

The plan also calls for diversifying plantings, adding topsoil and and fencing off growing plants so they will not be eaten by deer.

"A lot of people have said to just leave the Outer Harbor alone and it will do its thing," Ranalli said.

"The reality is we have left it alone for 60 years and it has done nothing. All we have out there are one or two areas of cottonwoods and a bunch of invasive species."

The bike ferry would be relocated toward the middle area of the marina, near the grain elevator.

There would be a comfort station, a place to get food, the small beach and an interpretive center on the ground level of the 1954 annex to the Connecting Terminal, the same behemoth structure a light show is projected onto every night.

Not in the plans for now: A restaurant on the roof of the grain elevator. Ranalli said a decision was made to focus for now on the site's industrial heritage.

There are plans for a couple of piers. And there would be space to rent bikes, kayaks, canoes and other aquatic equipment nearby on Fuhrmann Boulevard.

Fewer boats would be stored at the marina. There would be a winter storage for 115 slips, a drop from past years.

"It's really to clean up these boats from sitting on the site year-round," Ranalli said. "It's too valuable a property for that." 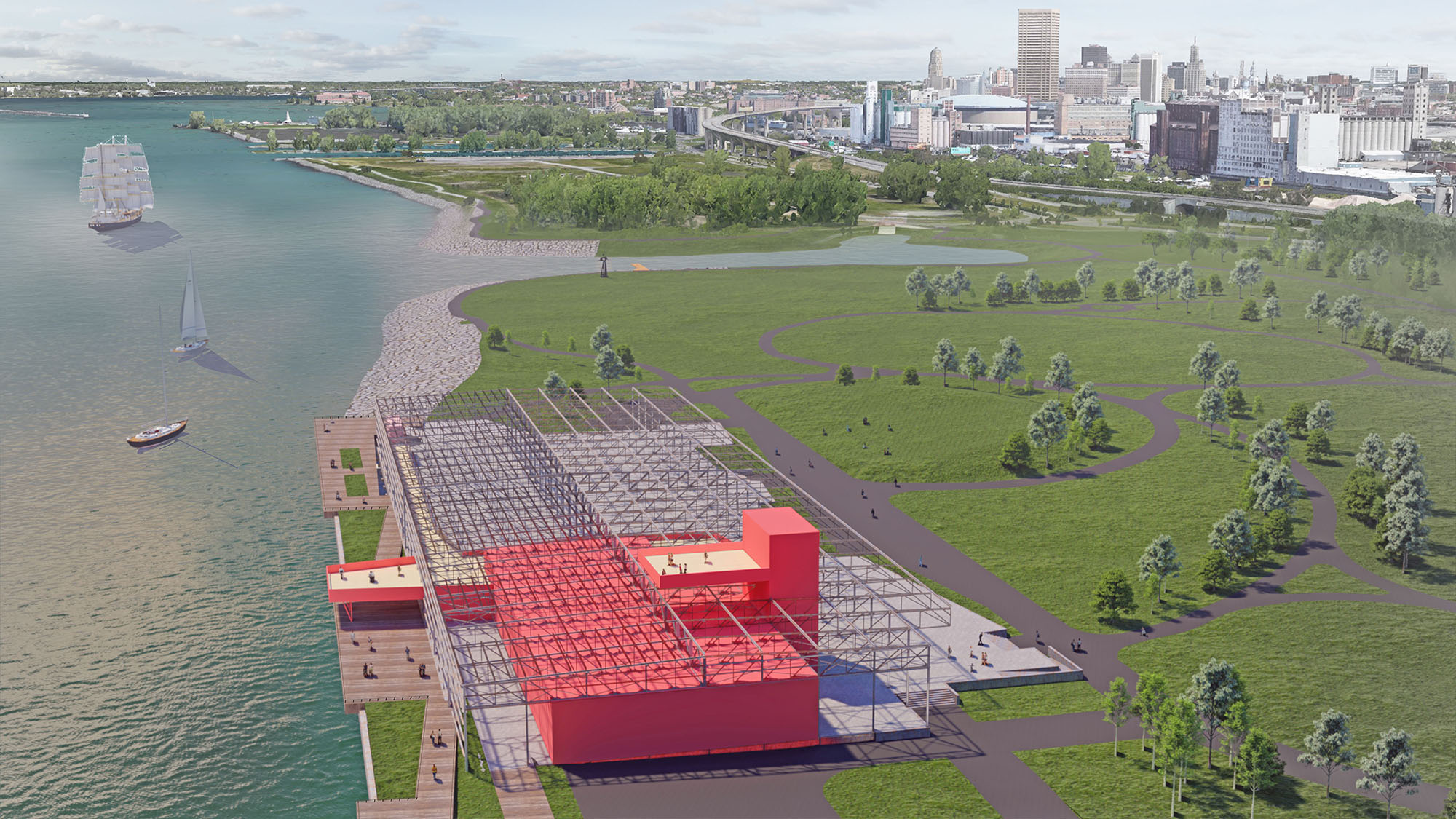