A Hamburg-based prepped meal business that touts its “guilt-free takeout” has opened a fourth location in Amherst.

The latest rendition of Kitchen 32 will celebrate a grand opening from 10 a.m. to 6 p.m. Saturday at 1612 Hopkins Road, at Dodge Road, in the Rite Aid plaza.

A fifth location is expected to open in Cheektowaga in the coming weeks.

Dave Rogers started the company and oversees prep for all the meals at 5 Lake St. in the Village of Hamburg. He creates special meals there for weekly delivery and takeout, and has partnered with franchisees at the other locations, which offer frozen breakfast, lunch and dinner meals, said Michael Gurnett, who with his son, Danny, owns the new Amherst franchise.

All meals all cost $5.50, contain a balance of protein, carbs, and fruits or vegetables, and pack no more than 500 calories. The single-serving meals are what “the average person can eat and not walk away hungry and not walk away stuffed,” said Gurnett, who once owned a security alarm business.

He met Rogers about a decade ago while installing alarms and cameras in a pizzeria Rogers co-owned.

“Dave and I used to talk entrepreneurship all the time,” Gurnett said. “When he mentioned this to me, I told my son about it and my son was hooked.” 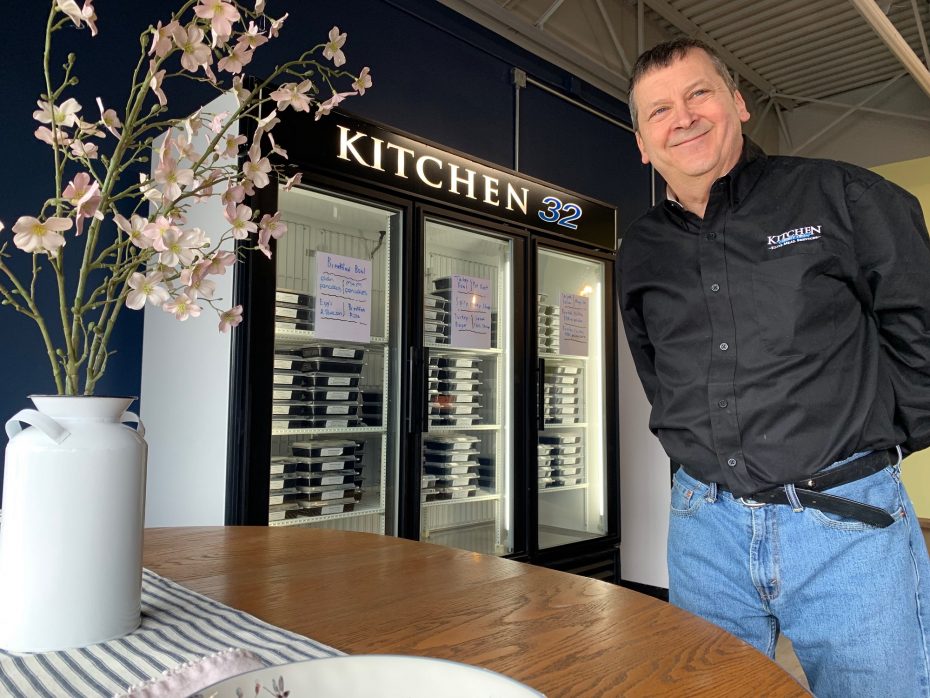 Michael Gurnett, pictured, said he went into business with his son Danny so he'd have something to do in retirement. (Scott Scanlon/Buffalo News)

Danny Gurnett serves on the Niagara Falls Air Reserve Station as a sensor operator in 107th Attack Wing of the New York Air National Guard, the same unit his fater served in for 12 years as an aircraft mechanic.

The inspiration for the meal kit company name came from Rogers’ son, who was born in March, the third month of the year, on the second day.

Kitchen 32 features a rotating mix of 25 meals that cycle back into the freezers within four weeks. The most popular entrees since the Amherst store opened last month include five cheese ravioli, and black and blue steak. Chicken, seafood and vegetarian meals also are offered.

Gurnett said he picked the location because it’s within easy driving distance of several senior housing developments and Millard Fillmore Suburban Hospital, and across Hopkins Road from Williamsville North High School – spots where people are looking for healthy meals they can prepare and eat on the go.