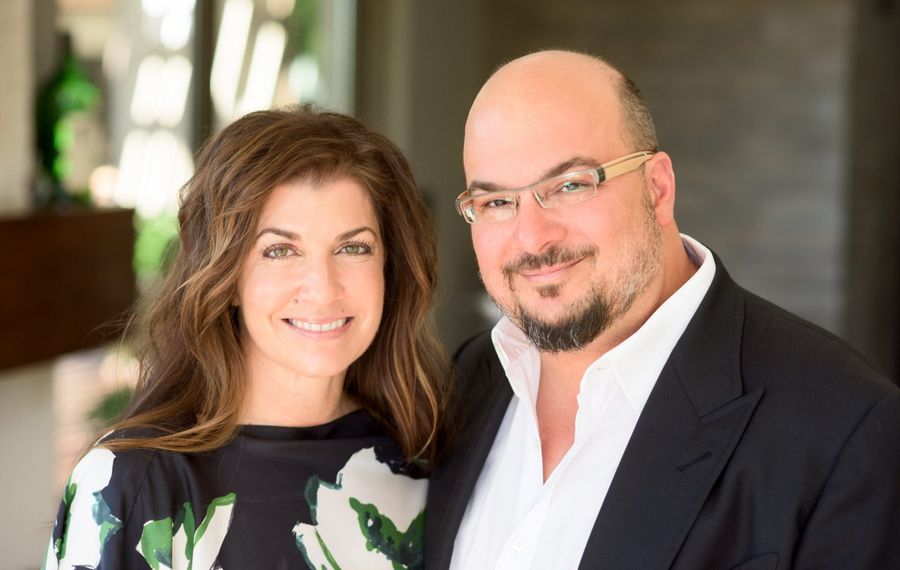 Anthony Zuiker was in a downtown Buffalo building recently trying to hold back tears.

The creator of the CBS megahit “CSI” and its spinoffs was explaining the difficulty of interviewing people for his newest project – graphic novels designed to help children deal with serious issues.

The tears won out as he addressed interviewing families and their children who have dealt with school gun violence, bullying, divorce, gender identity, racism, body image and teen suicide.

The interviews are a big part of the process of putting together the 72-page illustrated books published by Zuiker and his wife, Western New York native Michelle Territo.

Zuiker was in Buffalo last month to convince school districts, individual donors, foundations and corporations of the importance of the project and to invest in it to get the books in the hands of students.

“The response has been overwhelming,” said Zuiker, who figures he comes to Buffalo from his home in Southern California four to six times a year. He is expected to return in a few weeks for a big announcement.

He is here more often than his second wife, Territo, a former schoolteacher who is a consultant on the project.

“I never anticipated how much Michelle and I would grow in this process ... hearing from the tragedies of children, try to write these stories with children, dealing with families that are still going through issues with their children,” said Zuiker. “And then having our authors say, ‘if I just can just help one kid, it's worth it.’ Every one of our authors has that kind of philosophy.”

The books are designed to get a conversation going with students around the country about their issues.  He calls the interview subjects the authors, but he writes the books.

The most difficult situation for Zuiker was talking to parents Jennifer and Jason Lamberth about their teen daughter, Hallie Joy, who committed suicide after being severely bullied. Zuiker met the Lamberths through a mutual friend and they asked him to tell their daughter’s story.

He said talking with them remains “super raw” four years after their daughter’s suicide.

“It’s haunting to have the conversation,” said Zuiker. “We had to take several emotional breaks over the course of three days, because you are just trying to be as delicate as possible with two parents that literally have been kicked in the heart. Then you have the responsibility to try to get it right. It’s not easy.

“But then you do get it right. Because you have great love and care for the material. And then the family takes months to read it because it's too hard for them to read. That was a tough one, but probably the best one I've written,” said Zuiker.

He gains the trust of the authors and shows them he cares.

“If one of my children died, I don't even know how I could even talk to someone about it to the point to write a story. It's courageous for them to take three days – they were sucking it up – to get it out.”

He hopes readers will take a lesson from it.

“The one thing the mother told me is, ‘my daughter didn't know she had any options.’ That's the line that got me in the interview. And I hope the book communicates that suicide is a permanent solution to a temporary problem.

“I hope that the book says, you can tell your parents, you can talk to a counselor, you can change schools, you can move to a different city, that there are options, but the worst option is to harm yourself.”

Zuiker can relate to several of the stories. His father committed suicide. He was bullied as a child. He has been divorced. And he has a son, Evan, with high-functioning Asperger syndrome. Evan inspired a project about three years ago that led to the publication of the first four graphic novels, with four more to come.

Zuiker interviewed his son for 45 minutes, wrote the script and illustrated the book called “A for Autism.” But he never released it because Evan was a little nervous about “being out there.”

The books that are released are enhanced by an educational specialist, who helps put together an educational package online that accompanies the book written in the form of Common Core. The illustrations are done by people that do the Marvel movies in Hollywood. An expert also offers five takeaways for parents for every book.

“The schools love the books for the social/emotional part of the conversation,” said Zuiker. “It’s hard to embark upon a conversation with cyberbullying, school shootings, divorce, without having something that can kind of kick it off. So, when the kids see a graphic novel, kind of a comic, they jump right into it.”

He hopes is to raise $1 million to $3 million here. One donor, Jodi Osinski, sent a $25,000 check. Zuiker’s goal is to get the book into the hands of every Buffalo child possible from fifth through 12th grade.

“Because these topics affect them every day,” said Zuiker. “Kids feel better by sharing, they have something to talk about, something to go to … The first thing the book says is ‘you're not alone,’ that somebody else went through this that's your age that looks like you."

Zuiker said he is very selective in choosing authors whose stories illustrate success and empowerment. While in Buffalo, he met a teenager, named Suneel Ram, who will be the subject of a future book.

“It will be a courageous story about a boy stricken by a disease and making the most out of his life to inspire others,” wrote Zuiker in an email.

Zuiker is doing this project to give back after his unbelievable success story. He was 29 when he created “CSI” against all TV odds and CBS picked up the pilot  after ABC decided against it.

“It was like this somebody who's never played poker before going to the World Series of Poker, paying $10,000 entry fee in Las Vegas and miraculously getting to the final table and at the last hand of the night that would swing the table either way you happen to get a royal flush,” said Zuiker.

He views success in life as more than about how much money you’ve made in television.

“Chapter 2 of my life at 50 years old is to leave behind a legacy to help children and to leverage my skill set as an artist and as a writer, to tell children stories to help other children,” he said.

“Every one of our authors is the ambassador of their issue,” said Zuiker. “The ambassador of divorce or cyberbullying, and the sort of conduit in the narrative construct to get there.”

He preaches to his own children to be all they can be.

“But I feel like I have to go beyond that and try to help all children beyond just my own personal three,” he said, “give back by doing great stories to help others.”

“It's almost like I have a bunch of children, all of these families I work with every day,” he added.