Vladimir Guerrero Jr. is gone to Toronto, conceivably for good. Now, you never completely know how these things go. As Buffalo Bisons manager Bobby Meacham said Monday, "the big leagues are a different animal, man." And even Los Angeles Angels superstar Mike Trout got sent back to Triple-A for 20 games in 2012 as a 23-year-old.

But Guerrero certainly looks like a sure bet after hitting .367 in his eight games with the Bisons this season, and he batted .336 in 30 games with Buffalo last summer. And while the Bisons are again struggling in the W-L columns, their role in Toronto's development process remains strong and Meacham continues to earn plaudits for it.

Blue Jays officials repeatedly said as Guerrero was here in April that they were checking in daily with Meacham, and player development director Gil Kim spent plenty of time on site with the Bisons.

Kim and Meacham finally gave Guerrero the word on Wednesday in Meacham's hotel room in Syracuse that the time had come for the Vladdy Jr. Show to take the stage in Toronto.

"We believe wholeheartedly in empowering talented baseball people," said Blue Jays General Manager Ross Atkins. "The hiring process and development process of staff and making sure we're working together on plans is important to us. Ultimately, Bobby did have a ton of say of how he was improving every day, how he was getting better.

"The baseball decision trying to decide when he was ready was really about trying to optimize all the variables to make the best decisions for a young player's transition. Bobby had a big part in that." 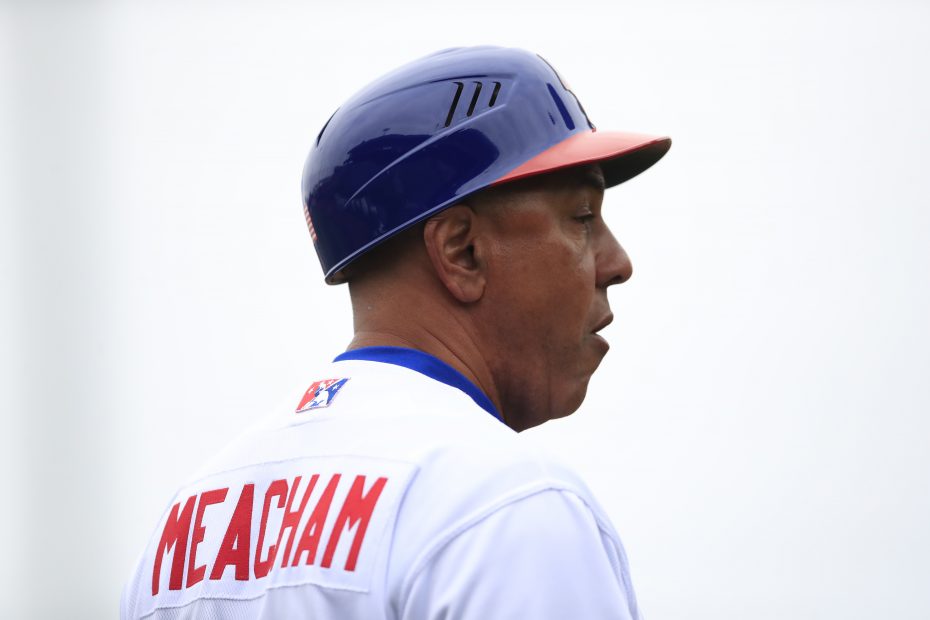 The Blue Jays have entrusted Meacham with Guerrero and top prospects Bo Bichette and Cavan Biggio this season. If they didn't feel he had value in nurturing young players, there's no way they would have kept him in Buffalo for a third season after last year's 61-77 campaign that ended with an 11-game losing streak.

"Everybody gets a lot of feedback on each player, even guys who are playing well who may not have been considered prospects," Meacham said. "In my mind, I wasn't making any calls on Vladdy. I was just doing my job, giving the input I felt on how Vlad was doing. You focus on what's best for the player and what's best for the Blue Jays going forward."

Meacham said he paid close attention to Guerrero's work habits, especially in pregame drills, and the way he arrived at the ballpark focused for the game. Because few 20-year-olds have ever been in Guerrero's position.

"It had to be hard to be in that position," Meacham said. "We knew he was going to be good but he was stuck in that thought of 'Where am I going to go next?' He was probably wondering when. Most people don't have to deal with that attention to it. It's if I get called up and I hope I get called up. He was forced to be at 'I wonder what day it's going to be' and that can make it hard to just work at your craft."

Prior to his debut on Friday in Rogers Centre, Guerrero told reporters that Meacham said he had to keep working on his defense and that he told Meacham he would come early to the ballpark in Syracuse on Thursday to get in extra work. That's when Meacham said he couldn't be a part of the session because Guerrero was going to Toronto.

Meacham said he didn't plan any particular way to break the big news to Guerrero, knowing full well the moment was imminent on the Bisons' road trip.

"We already had a meeting set up at that time just to talk to him about different things," Meacham said. "So it was one of those things where we wanted him to hear more than just that he was going up. We wanted to contemplate where he's at so far, how we wanted him to keep focusing on things. In the midst of that, we knew he was going up. There was a combination of things we had to tell him anyway."

Meacham, 58, has seen a lot in his career but the Guerrero situation was one of the most unusual scenarios because of the attention he garnered in the minor leagues. A former first-round draft choice of the St. Louis Cardinals who played parts of six seasons with the New York Yankees, Meacham has been a minor-league manager for 13 years and a big-league coach for six years.

"Bobby has had huge baseball experiences," Atkins said. "Think of the players he's been around and the way he senses the game. If you think about baseball staffers ... someone who played it their entire life and was in it 162 games as someone like Bobby Meacham was. His baseball experiences have had a massive influence on Vladdy."

Now Meacham can become a Guerrero fan like everybody else. But he's been in the game too long to know nothing is a sure thing. 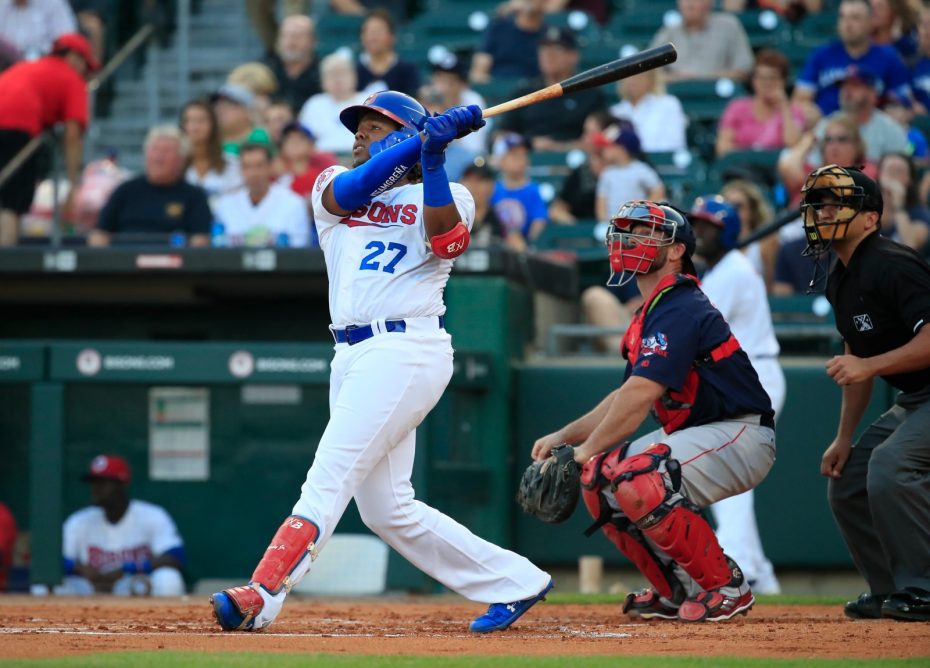 "Everybody said he hit so much here, he's going to do this in the big leagues. That's a different animal. You never really know who's going to hit," Meacham said. "You know who can play up there and I know he can play and be very successful but you can never say for sure who is going to hit really big.

"I remember when I was in New York, hearing Yogi Berra talk when certain guys would come through our system. Jose Rijo, Roberto Kelly, Jay Buhner. Yogi said, 'Remember Joe Charboneau?' " in a reference to Cleveland's one-hit wonder who was AL Rookie of the Year in 1980.

"Some of us would go, 'Who?' and he would say, "Exactly. Joe Charboneau.' (Current Pittsburgh manager) Clint Hurdle was once the cover of Sports Illustrated, too. You never know. All big leaguers are great players but how good is he going to be is the real question and that's up to him."

The Guerrero situation has been a major sidebar to a hugely disappointing start for the Bisons. They were 7-14 heading into Tuesday night's makeup doubleheader against Pawtucket, their worst record to that point in the season since the 2009 disaster that opened the New York Mets' four-year run as their parent.

Bichette is out four to six weeks with a broken hand suffered when he was hit by a pitch, but the injury is less severe than it could have been and surgery was not required. Bichette had batted .355 in an eight-game stretch before the injury.

Biggio easily has been the Herd's best player, entering Tuesday with a .348 batting average while playing in every game. 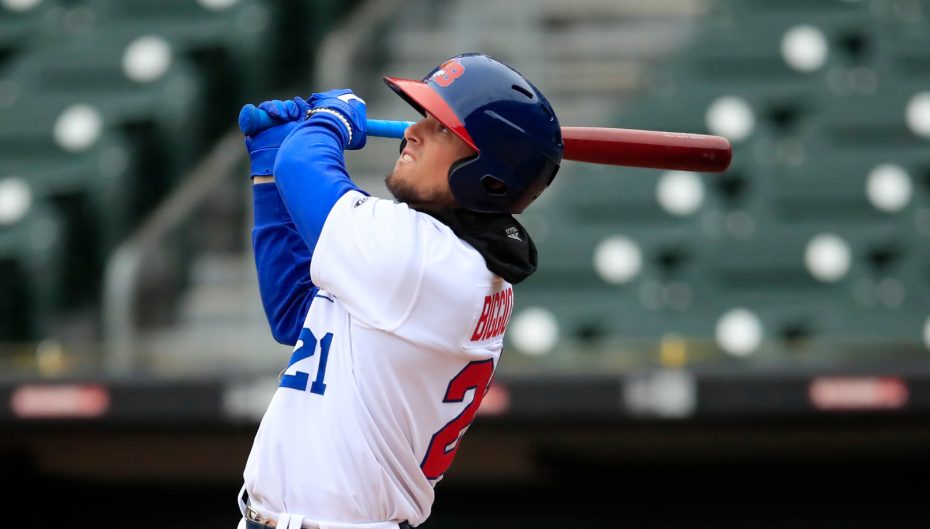 "He's been a very good hitter," Meacham said. "The combination that makes it work for him is his selectiveness and his aggressiveness."

The Buffalo pitching has been a disaster, with an ERA of 6.26 that would be by far the worst in franchise history if it lasted the entire season. The only team with a worse ERA at any level of the minors is Tacoma of the Pacific Coast League at 7.17.

Sean Reid-Foley, Toronto's top pitching prospect with the Herd, has a 10.42 ERA in five outings and fellow starter Shawn Morimando is at 12.56.

Meacham knows good pitching can be contagious through a rotation. But so can struggles.

"Guys might say, 'The bullpen is taxed so I need to stay out there,' " he said. "I say no to that and that you just need to be you and hopefully the guy who did that before you shows you that. Then it becomes contagious in the right direction. That's how it helps you and gets you in the mindset of winning and not just hoping."