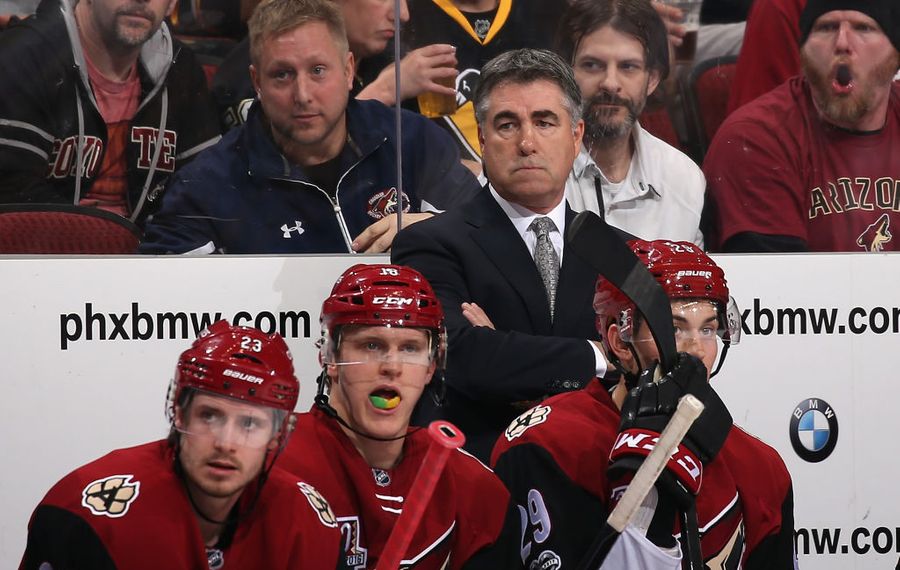 The search for the Buffalo Sabres' next coach has reportedly led General Manager Jason Botterill to Dave Tippett.

Friedman also confirmed a previous report that Jacques Martin is a candidate in Buffalo, while Swedish National Team coach Rikard Gronborg is also "in the mix" and Toronto Marlies coach Sheldon Keefe impressed Sabres brass with his first-round series win against Rochester.

Tippett, 57, has not coached in the NHL the past two seasons, most recently serving as a senior adviser for Seattle's ownership group. Following a fifth consecutive nonplayoff season, Tippett agreed to part ways with the Arizona Coyotes in 2017, only one year after he signed a five-year contract extension.

Tippett has 14 years of NHL coaching experience, beginning with a six-year stint behind the Dallas Stars' bench. He led the Stars to the Western Conference Final in 2008, only to be fired after missing the playoffs the following season.

Tippett would lead the Coyotes to the playoffs in each of his first four seasons, winning the Jack Adams Award after a 50-win season in 2010. Following back-to-back first-round exits, Tippett and the Coyotes reached the conference finals in 2012. They would lose to the eventual Stanley Cup champion Los Angeles Kings in five games.

Arizona would not win more than 37 games in each of his final five seasons.

Tippett, who played 12 seasons in the NHL, began his coaching career as an assistant coach with the International Hockey League's Houston Aeros in 1995-96. He would spend parts of four seasons as the team's coach before joining the Kings as an assistant from 1999-2002.

Tippett was hired by the Dallas Stars in 2002 and would become only the seventh coach in NHL history to lead a team to back-to-back 50-win seasons. He served as Canada's coach in the 2013-14 World Cup and also served as executive vice president of hockey operations during his final two seasons in Arizona.