Victims of AbdulAziz HouHou's $140 million to $240 million real estate flipping scheme are asking authorities to investigate if lawyers, real estate companies and insurance companies in Buffalo and other U.S. cities conspired with HouHou.

Kuwaiti authorities are following a money trail from Kuwait to the U.S. to try to recoup money lost by Kuwaiti investors. The investors bought hundreds of houses through HouHou and his companies in Buffalo, Rochester, Detroit and other American cities, as well as vacant lots in Florida, North Carolina and Texas.

"None of the money they have collected from the investors remains in Kuwait," said Ali Al-Attar, a Kuwaiti attorney representing scammed Kuwaiti investors, in an email to The Buffalo News.

The News reported Sunday that HouHou, a Kuwaiti broker, was flipping houses in Buffalo and other U.S. cities, as part of what a Kuwaiti court called an international fraud and money-laundering scheme. HouHou was fined $16 million and sentenced in 2018 to 10 years in a Kuwaiti prison.

Al-Attar's law firm is now working with the Kuwaiti government, which has begun an investigation to find out who benefited from HouHou's scheme, the attorney said.

"We have started working with official entities to trace assets and money," he said. "Many bank transfers made by Houhou incorporated companies to the United States were for the benefits of U.S. law firms, real estate companies, and insurance companies."

Al-Attar said he is not aware of any evidence showing the companies committed any wrongdoing. "However, in light of the magnitude of the Ponzi scheme, it remains questionable whether these companies conducted the requisite due diligence before entering into transactions with the convicted felon," he said.

HouHou and his companies were flipping run-down, often vacant houses in the United States — advertised as pre-leased "attractive investment properties" – to finance further real estate sales, Al-Attar said. There were instances when HouHou was selling houses that weren't for sale, and times when he sold the same house to different investors at the same time, investors said.

In the end, about half the houses Houhou flipped in Buffalo from late 2013 to mid-2016 ended up in foreclosure. Over a dozen were demolished by the city, and others were sold for pennies on the dollar.

'We noticed that the same names keep appearing'

Kuwaiti investors initially organized to bring charges against HouHou. Now, the same group of investors is asking questions about the role certain U.S. lawyers played in HouHou's scheme. They are also asking about the real estate firms that HouHou's companies did business with – including the Glebova Realty Group in Buffalo and Woodmall Properties in Rochester, as well as Blackwater Consulting in Detroit.

Blackwater's registered agent is a lawyer given power of attorney by HouHou to sign documents on the Kuwaiti broker's behalf, according to records filed in Michigan and at the Erie County Clerk's office.

"We noticed that the same names keep appearing," said Mubarak Almubarak, referring to the real estate companies. Almubarak is among the Kuwaitis who helped rally victims of HouHou's house flipping fraud.

[RELATED: How a Kuwaiti man's Ponzi scheme left a trail of blight in Buffalo]

Representatives of Glebova and Woodmall deny any wrongdoing.

"After it left his hands, whatever HouHou or his property managers did with it is not connected to Glebova," Lana said of the properties that were sold.

Said Woodmall co-owner John Nacca: "The downfall was not in the transfer of properties. The breakdown was after the sale."

HouHou directly bought about 80 houses in Buffalo, which were resold to other Kuwaitis, then put under maintenance contracts with property management companies HouHou companies operated in the United States.

In about 80 other cases, HouHou's organization served as broker, finding Kuwaiti buyers for Buffalo properties owned by others, then handling all paperwork and payments on behalf of the buyers. These houses were also put under maintenance contracts with HouHou companies.

The News identified 65 properties sold this way that were owned by Glebova.

Glebova purchased the 65 houses for an average of $18,200, then sold them to Kuwaitis for an average $45,000.  The houses were generally sold within 16 days of being purchased, although 20 were flipped the same day they were bought by Glebova, The News found. 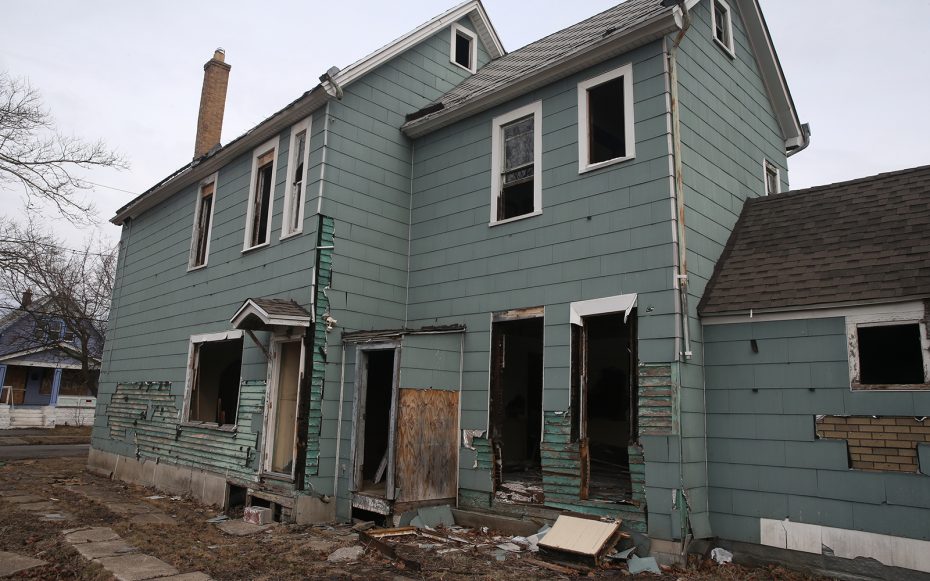 This house at 43 Goembel in Buffalo is one of the houses flipped by HouHou. (John Hickey/Buffalo News)

Glebova owner Levin, 41, did not respond to requests for comment. Levin pleaded guilty in August to tax evasion and was sentenced in late March to 21 months in federal prison. In a separate case, Levin was also charged last month with exposing children to lead paint in a house he rents on on Buffalo's West Side. Lana, his defense lawyer, said Levin was not charged in connection with HouHou's operations.

Levin was previously convicted of insurance fraud in 2007. At the time, Levin owned a medical clinic in Williamsville that was submitting false medical reports for staged automobile accidents. As part of his plea, Levin also admitted to cocaine charges.

Glebova was posting houses for sale on a British website and selling to people all over the world, said George A. Berbary, one of several real estate attorneys who have worked with Glebova since it began operating in 2010.

"There was no fraud, no deception," Lana said. "There is no connection financial or otherwise between Glebova and HouHou, other than a seller of particular properties. There was no partnership. Glebova had no direct contact with HouHou."

Lana and Berbary said they weren't in a position to know if the houses were renovated or occupied before being sold to Kuwaiti investors, but Lana noted the short turn-around time on many of the Glebova sales indicates those weren't being renovated.

In Rochester, The News identified about 120 houses purchased directly by HouHou or his companies, then resold to other Kuwaitis, and upwards of 100 more houses that HouHou companies brokered through Woodmall Properties.

Of the 107 Woodmall sales reviewed by The Buffalo News, Woodmall paid $27,000 on average for each house that it resold for an average of $57,000. Woodmall sold houses to Kuwaitis an average of 58 days after buying the properties, The News analysis found.

Most of the properties were renovated before being resold, said Nacca, the Woodmall co-owner, and almost all properties had tenants when they were sold.

While some houses were sold for above assessed value, the prices were fair and based on their value as investment properties, Nacca said.

"Purchase price is based on what they can generate in rent," Nacca said.

Woodmall was doing business with HouHou from mid-2013 through the early months of 2015.

In Detroit, Blackwater Consulting sold 10 houses to HouHou and dozens more to Kuwait investors whose sales were brokered by HouHou's firm, according to real estate documents.

Blackwater records list attorney Bronik as its agent and at one point its manager.

In addition to his role with Blackwater, Bronik was executing deeds on HouHou's behalf – serving as HouHou's power of attorney – in the United States, including in Buffalo, records show.

Problems arose with some of the deeds Bronik and others signed on HouHou's behalf because there were no documents, as required, filed with county clerks stating HouHou gave power of attorney to Bronik or others who signed his name on the deeds, according to several lawyers and real estate agents involved with the sales.

Bronik in 2017 filed an affidavit in Erie County stating that HouHou gave him power of attorney in 2013. That cleared the way for some houses HouHou sold – with Bronik's signature – to be resold.

Problems remain in Rochester, where dozens of deeds were signed on a single day – Sept. 25, 2015 – in the law office of one of HouHou's local attorneys, Kevin Brzezinski. In those sales, there was not proper power of attorney documentation, according to Snow. The documents were signed by HouHou associate Ali Al-Oufi, who is now in Kuwait's Central Prison, serving a three-year sentence for his role in HouHou's real estate scheme, according to court records.

Abdul AlShayji is among those unable to sell his three Rochester houses because there's no valid power of attorney filed in Monroe County for Al-Oufi.

"I don't understand," Alshayji said. "The houses are in my name. How come I cannot sell them?"